For the Record: The Bacri-Clark Kerman Sickle Leaf Throne Carpet

Michael Franses asks whether the Bacri-Clark throne carpet will be remembered for a world-record price ‒ US $33,765,000 ‒ or judged by the glowing words written about it each of the many times it has been exhibited? 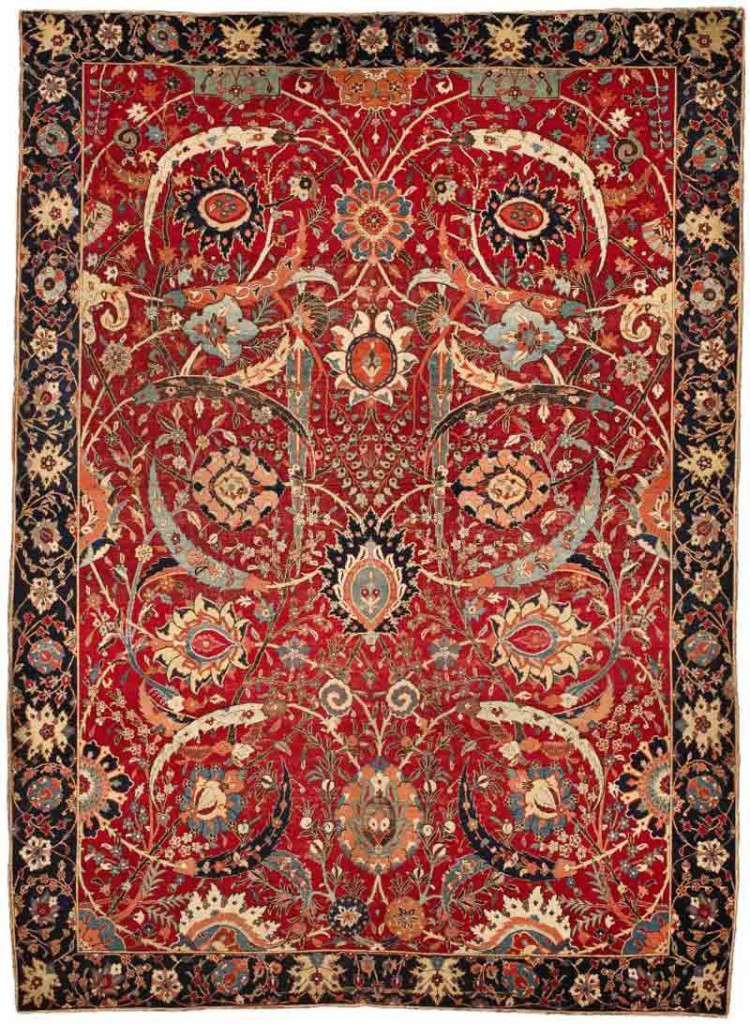 The Bacri-Clark throne carpet is one of the most beautiful and famous of all the great Safavid carpets known to a wide cross-section of art lovers. Most writers have recognised its superlative quality and there has been a surprising consensus of opinion as to its date: early seventeenth century has probably been suggested the most often, although both Pope and Beattie suggested that it might even be from the late sixteenth century, assigning it to the reign of Shah ‘Abbas (1588‒1629). Charles Grant Ellis, normally one of the most conservative of writers when the question of date arises, considered it to be mid-sixteenth century, and also commented that it ‘is in many ways the most beautiful antique carpet which has survived’.

But will this outstanding work of art be remembered for a world-record price ‒ US $33,765,000 ‒ or judged by the glowing words written about it each of the many times it has been exhibited? I fear it is more likely the former, as most people are impressed by value. If only they were to look at this carpet while considering the writings two great scholars and aesthetes they might gain an understanding of what is really before them. The writers were Arthur Upham Pope, the great scholar-dealer of Persian Art, and Dr Richard Ettinghausen, the director of the Islamic Department of the Metropolitan Museum of Art. For both of them the Bacri-Clark carpet was sublime, an outstanding masterpiece.

In 1978 Ettinghausen, one of the leading art historians of the twentieth century, wrote: ‘If a prize could be given to one carpet it would go to this one. What is it that gives this carpet such a singular position? Almost all Persian carpets (and most from other regions as well, whatever their design) emit an air of tranquility. There may be an underlying play and counterplay of various elements ‒ elegant spirals, twirling stems, twisted flowers, rushing animals, sometimes attacking other animals, hunters out during the chase ‒ but, in the last analysis, all is so well arranged that the final effect is serene and harmonious. In contrast to this classic repose, the Bacri-Clark carpet has all the aspects of Baroque impetuosity. From this evidence and, also, from the absence of a central horizontal axis, it has been surmised that the weaver copied a cartoon depicting only half of the design. The limited size was apparently sufficient for the space for which the carpet was created, probably a throne dais. In almost all other carpets, the double proportions were commonly used. The mirror images along the two axes imparted a more balanced and restful sensation. Here then, as sometimes happens in carpet compositions when the designer deviates from the standard pattern, a new concept was born from well-known themes re-arranged to appear novel and exciting. Pope’s encomium of the carpet, though written forty years ago [in 1938], remains valid today: “For sheer lust of the eye, for the luxurious and exciting rhythms, for finesse of detail, for symphonic splendor, and above all for a magical potency by which a whole new world, splendid and bright, has been summoned out of humble materials, a carpet like this deserves to rank as a great work of art”.’

Thus it is remarkably hard to assess the real worth of this carpet in today’s market. It is a quantum leap greater than anything offered at public auction in the past and certainly the best carpet to come under the hammer in the past fifty years or more. That said, what if a mid-sixteenth-century central-Persian Safavid carpet were to come on the market today on the level of the Ardebil carpet in Los Angeles, of the Paradise Park carpet in the same museum, or indeed the Sanguszko carpet that was acquired by the Miho some years ago? These might fetch considerably more. However, it is most unlikely a carpet of this importance, beauty and outstanding state of preservation will reach the market again.