There was a distinctly autumnal feel about the recent London sales season, at least as far as antique rugs and textiles were concerned. Although the main action, at Christie’s King Street on Tuesday 7th October 2014, yielded £1,513,375 ($2,435,020), representing 59% sold by lot and 69% by value, the auction took place in a saleroom that was listless compared to the excitement and optimism of their lively spring sale last April.

As expected, top lot at King Street was Lot 50, the well-known 18th century Douglass/Ritman Mughal millefleurs prayer rug, unique in its pure pastel palette and wonderfully tactile, which was a bargain for a private Middle Eastern collector at £338,500 ($544,650) including premiums, against an estimate of £300-500,000. The price sounds high enough until one notes that last time the rug appeared at auction, at Sotheby’s in New York in April 1996, it made $805,000 (HALI 87, p.161). 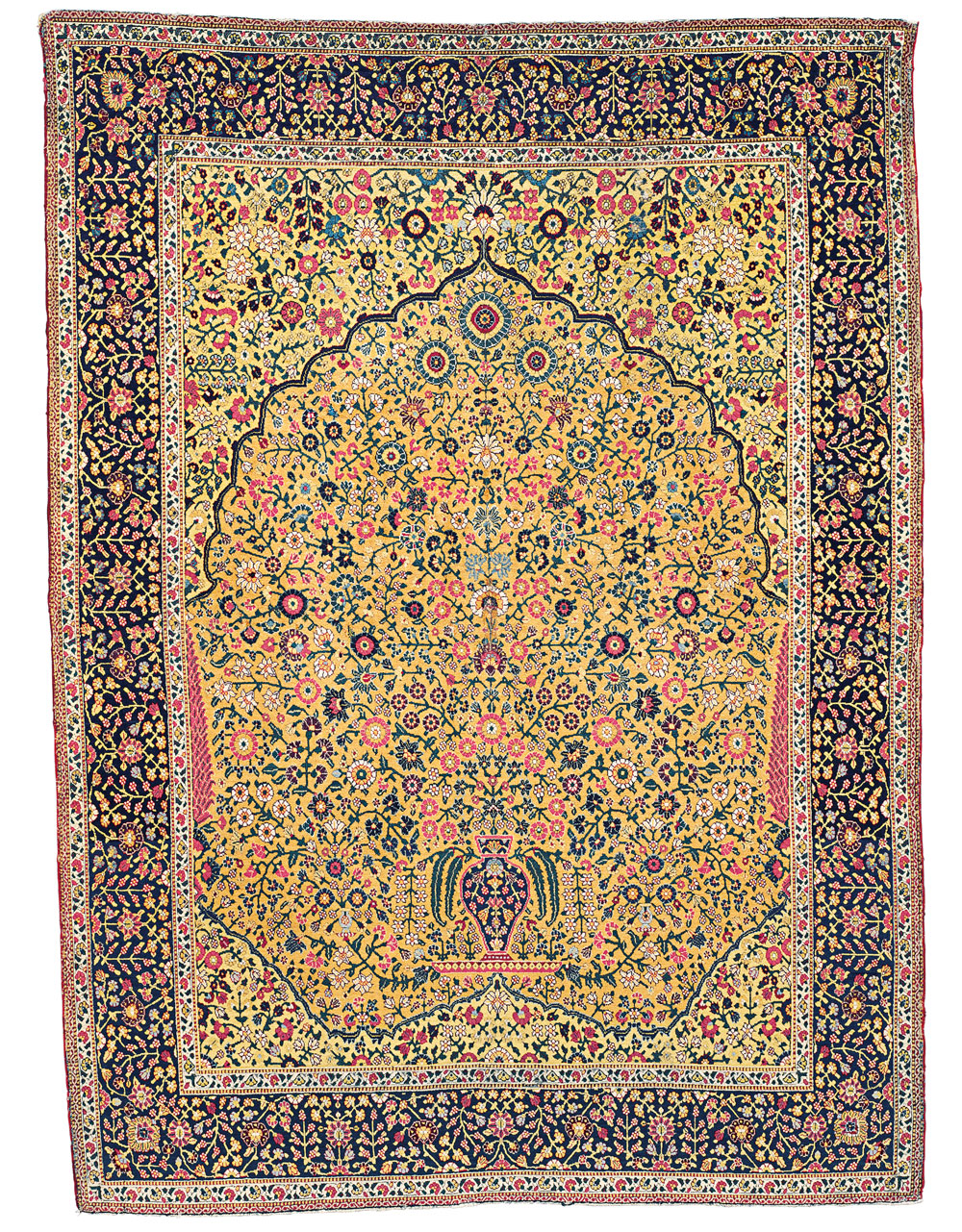 Head of Christie’s oriental carpet department Louise Broadhurst expressed particular satisfaction at the £98,500 ($158,485), double its estimate, paid by a different Middle Eastern private buyer for Lot 112, a 1920s silk and metal thread Kum Kapı carpet, again with pastel tonality, and an allover cartouche design based on the so-called Clam Gallus carpet in the MAK, Vienna. In her post sale statement, she also noted that all of the top ten lots were bought by private collectors, both Middle Eastern and European, outbidding both institutions and the trade. 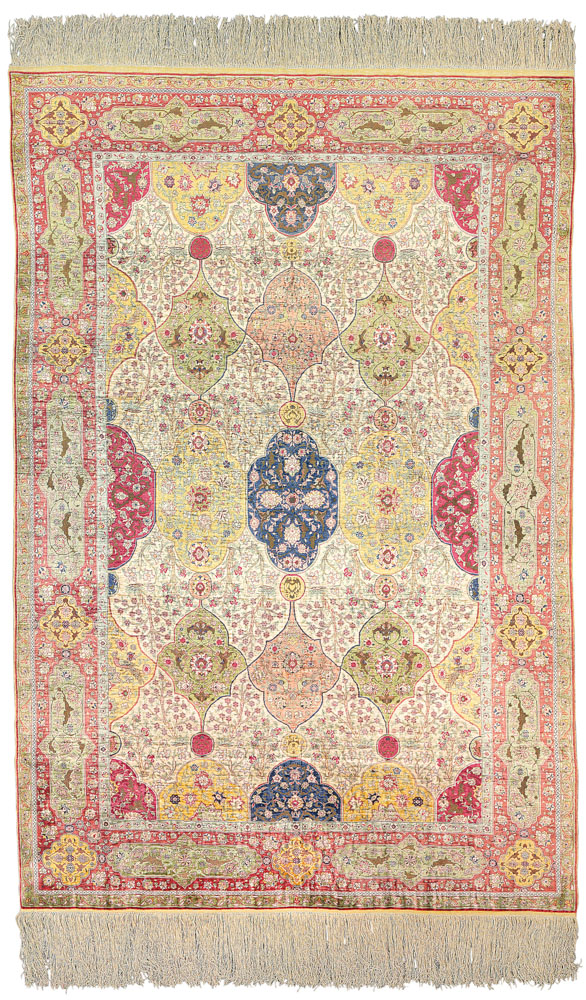 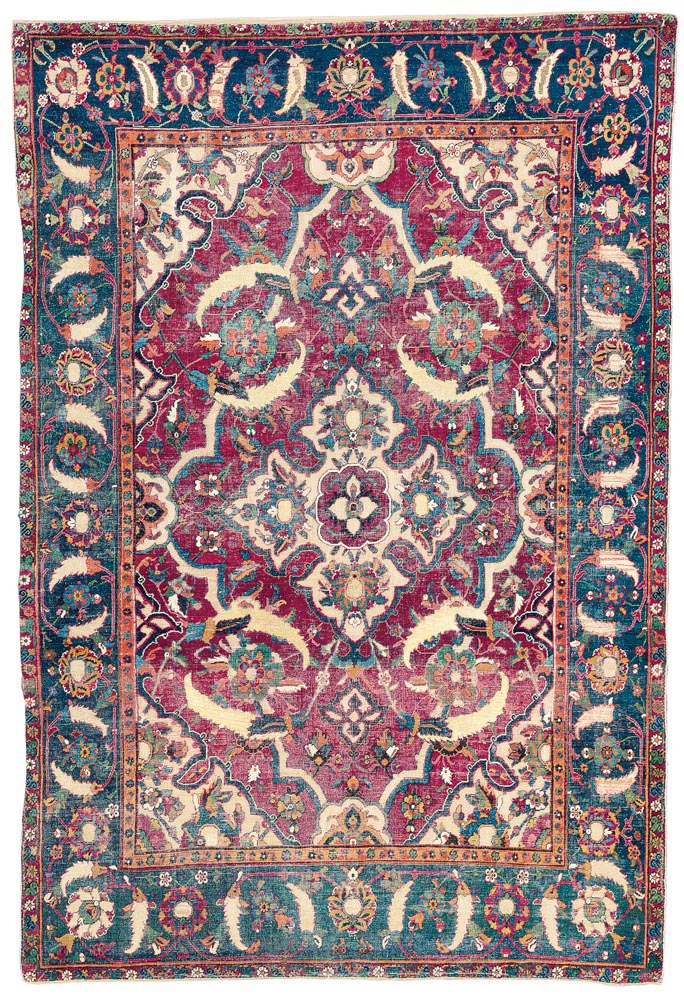 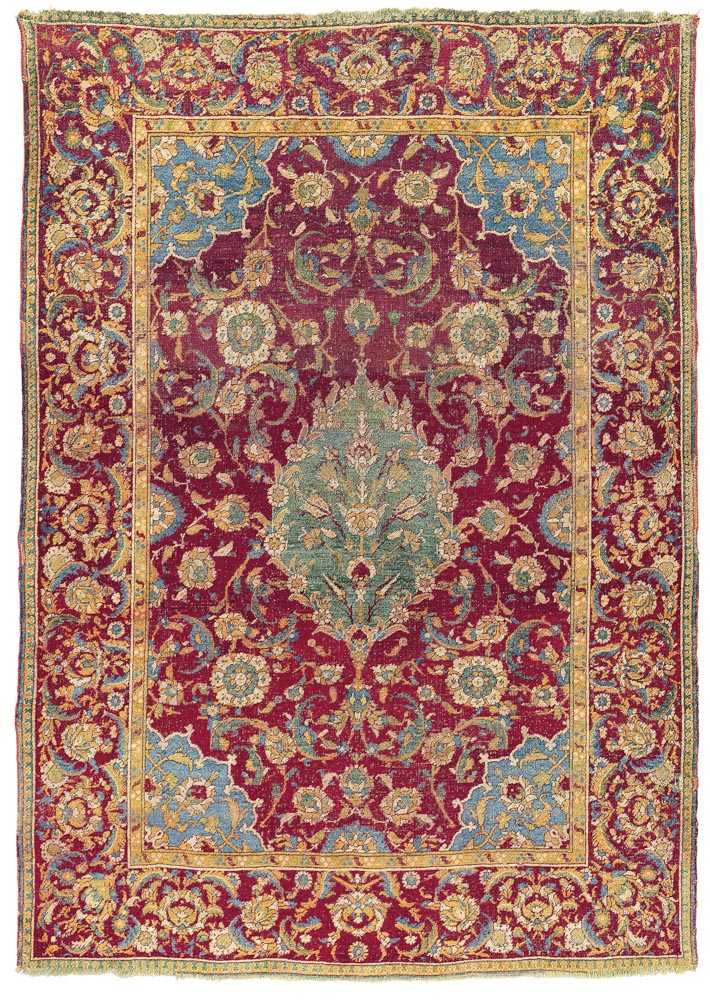 The cover piece, Lot 100, an elegant 16th century Alcaraz carpet with an allover ogival lattice design, fetched £62,500 ($100,650). The same price was paid for Lot 115, a typically worn and colourless Esfahan ‘Polonaise’ silk and metal thread carpet, which proved the enduring saleability of the type – an even more worn and ghostly ‘Polonaise’, but with Rothschild provenance, had sold for £31,250 ($50,595) at South Kensington a week earlier on 1 October (Lot 512 in CSK’s ‘European Noble & Private Collections’ sale). 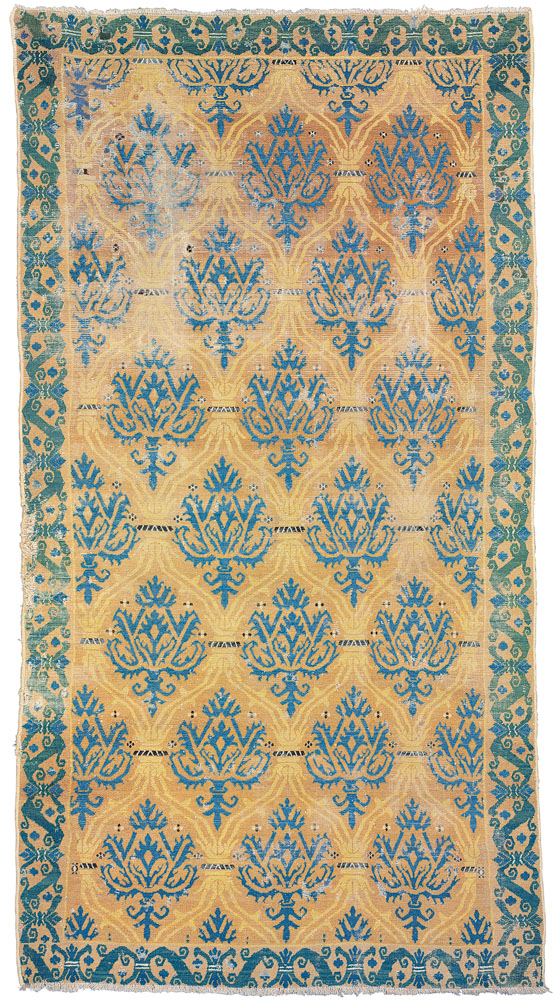 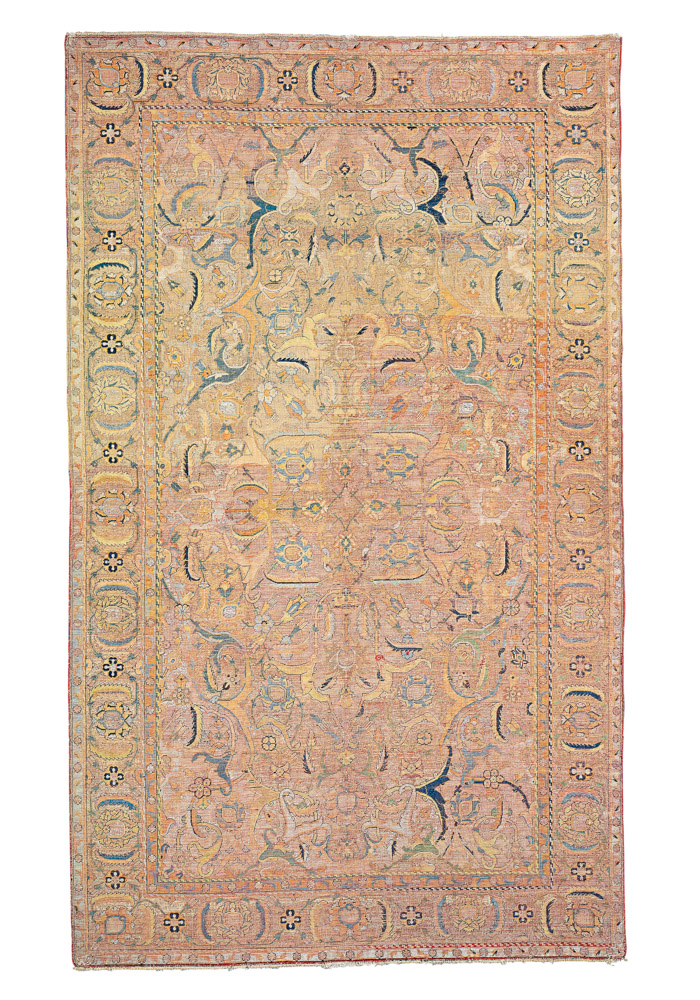 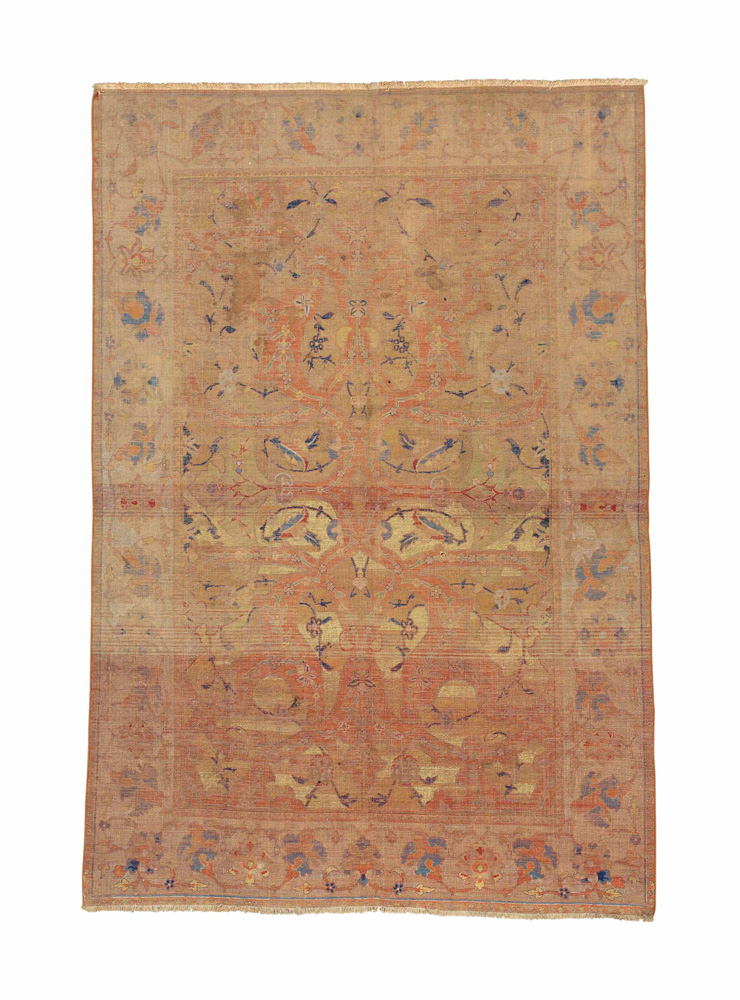 Other areas of Christie’s sale disappointed – collectable Turkmen and Baluch rugs and embroideries, southern Swedish folk textiles and Tibetan rugs all failed to find interest, although some decent Caucasians and good Persian decoratives sold well, albeit at prices that are a mere fraction of what might have been paid for such things a couple of decades ago.

Only one carpet of note was successful in Bonham’s Islamic sale on 7 October, Lot 263, a typical Kum Kapı head and shoulders silk and metal thread prayer rug, designed by Zareh Penyamian, which sold for £27,500 ($44,275). 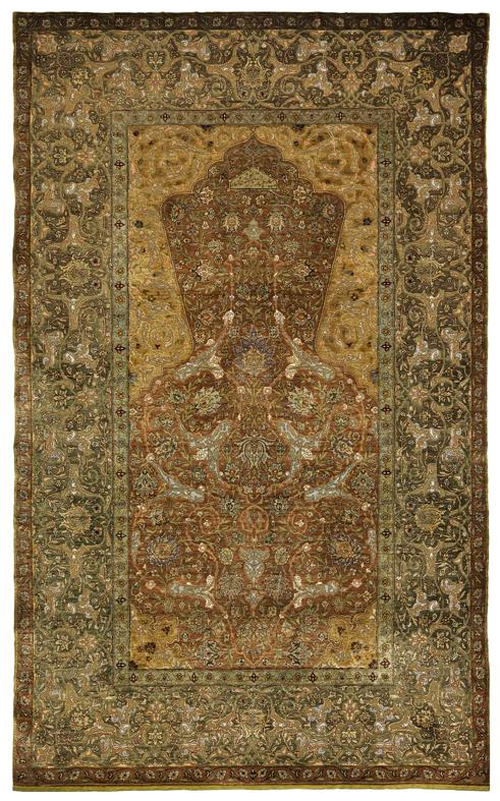 Top lot among the rugs and textiles included as an afterthought in Sotheby’s New Bond Street Sale of Arts of the Islamic World was Lot 192, a very well ordered late 16th century small-medallion Ushak rug, which sold for £134,500 ($216,545). And while a Turkmen pentagonal embroidered asmalyk at Christie’s had failed to find a buyer, a closely related piece at SLO (Lot 189), but arguably prettier with some figural elements in the border, was not expensive at just £6,785 ($10,925). 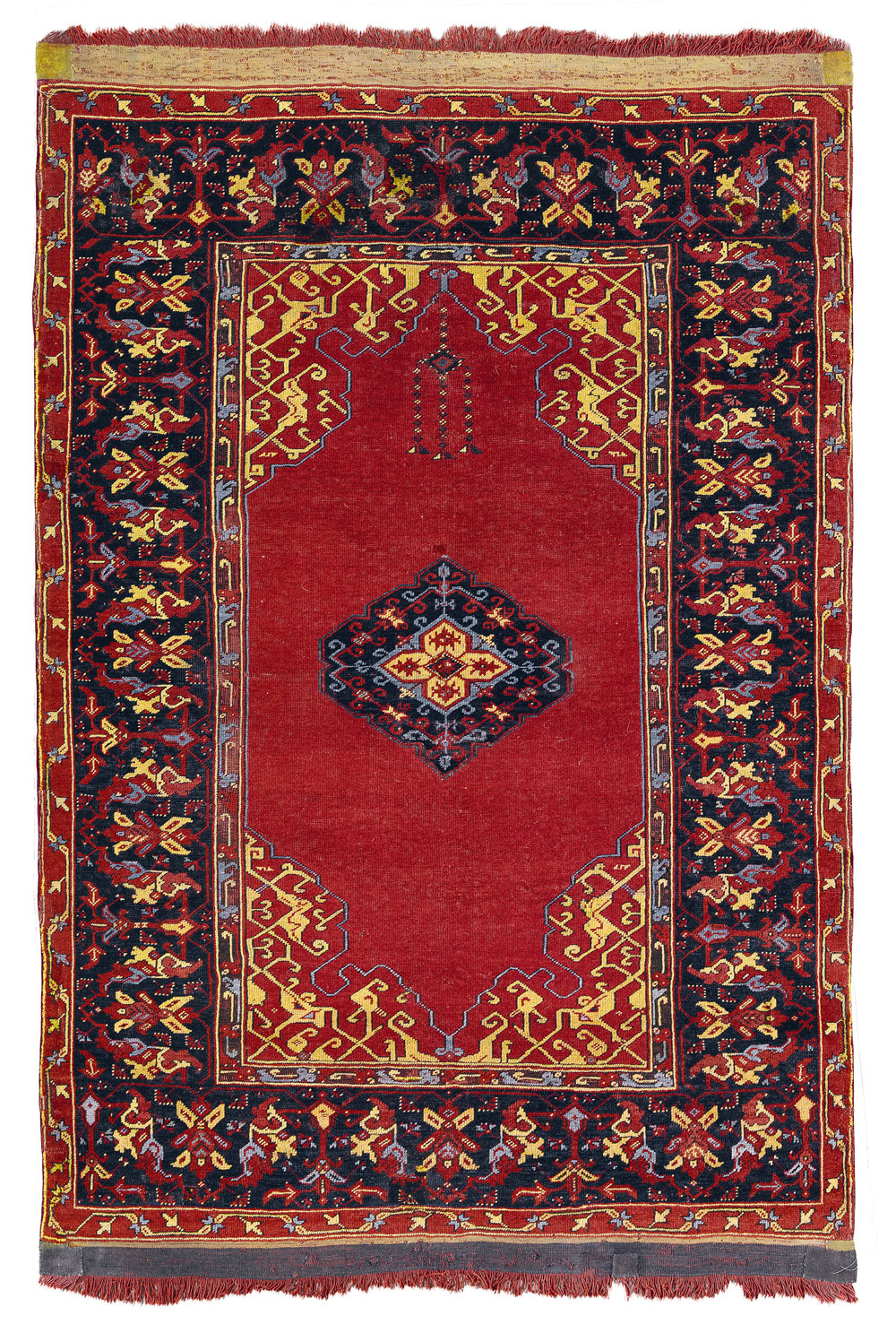 The standout textile in Christie’s sale of Art of the Islamic and Indian Worlds on Thursday 9th October was Lot 154, a richly embroidered silk and metal thread Deccani panel, which sold for £35,000 ($56,560). 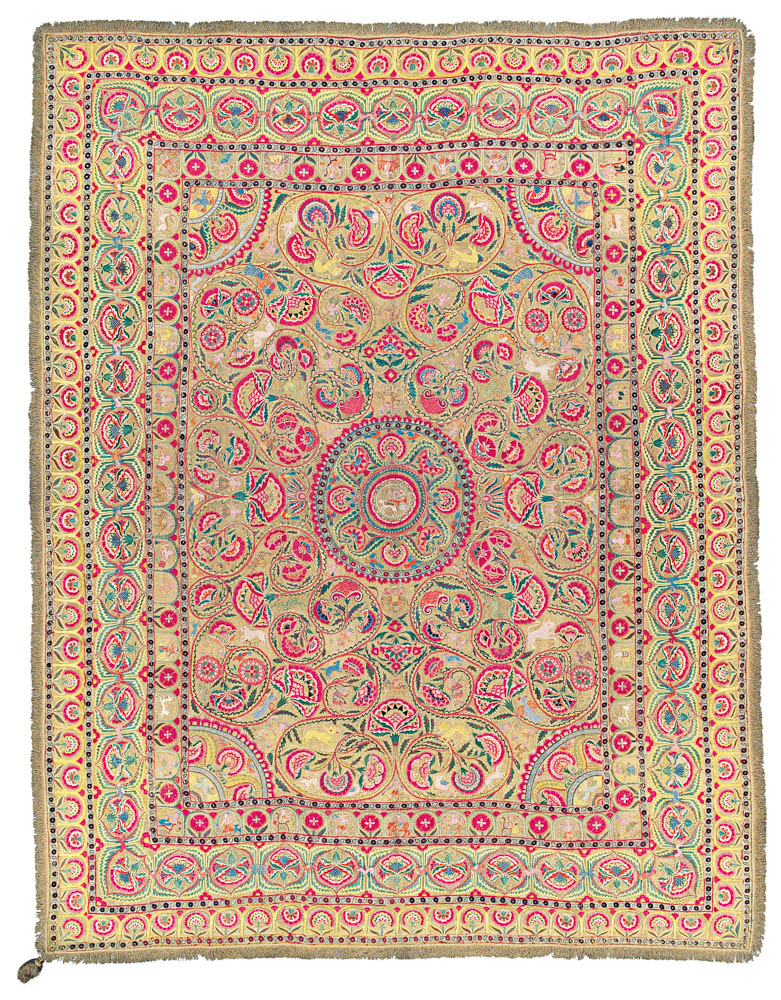 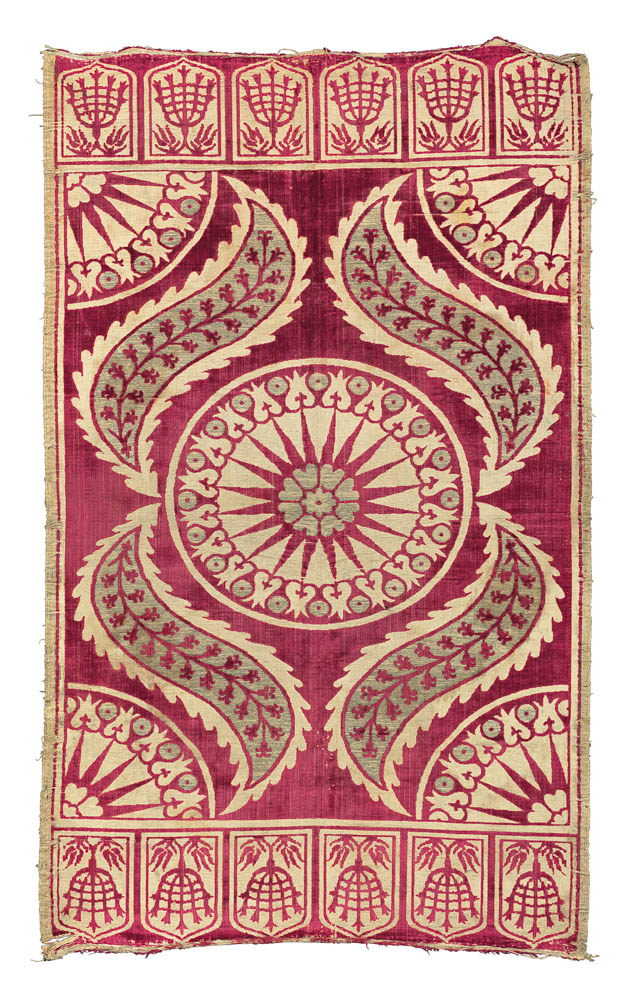 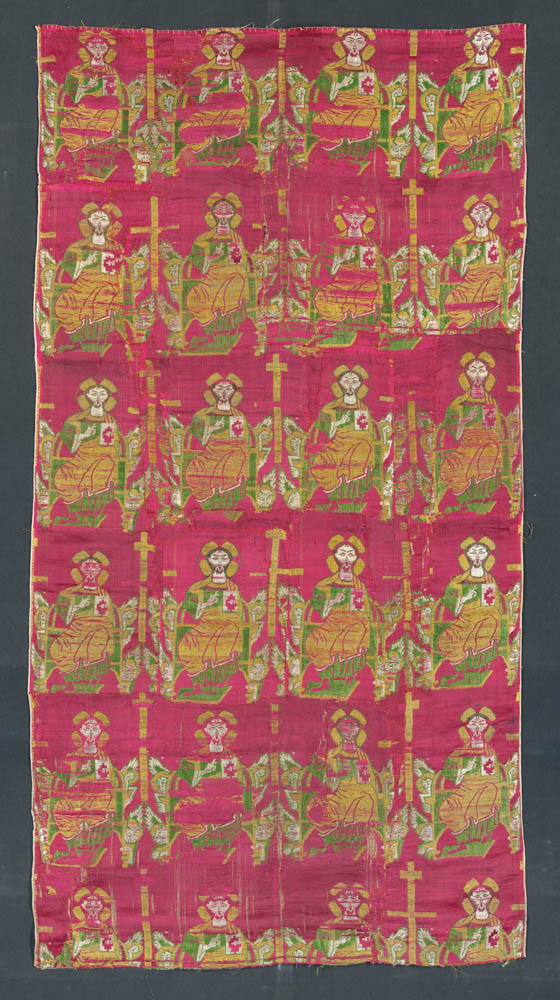