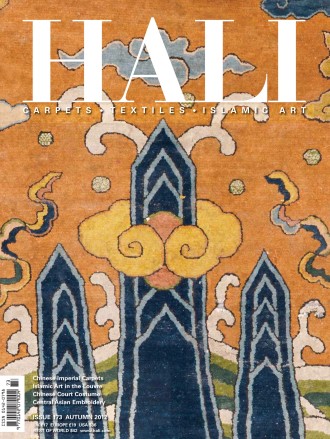 Update from CDA 2013, antique Chinese Carpets from Gallery Moshe Tabibnia, Bonhams cut back on activity. 18th century Ottoman embroidered silk decorate a castle in Saxony, and tribal garments protect from evil spirits in Qaraqalpak culture. We look into the silk of the Safavid period, Chinese costumes and an exhibition of Ming and Qing imperial carpets preserved in Beijing's Forbidden City.

Also featuring an exhibition of Flying Carpets from Rome and from APG, a Louis XIII Savonnerie carpet fetches more than $2mil. 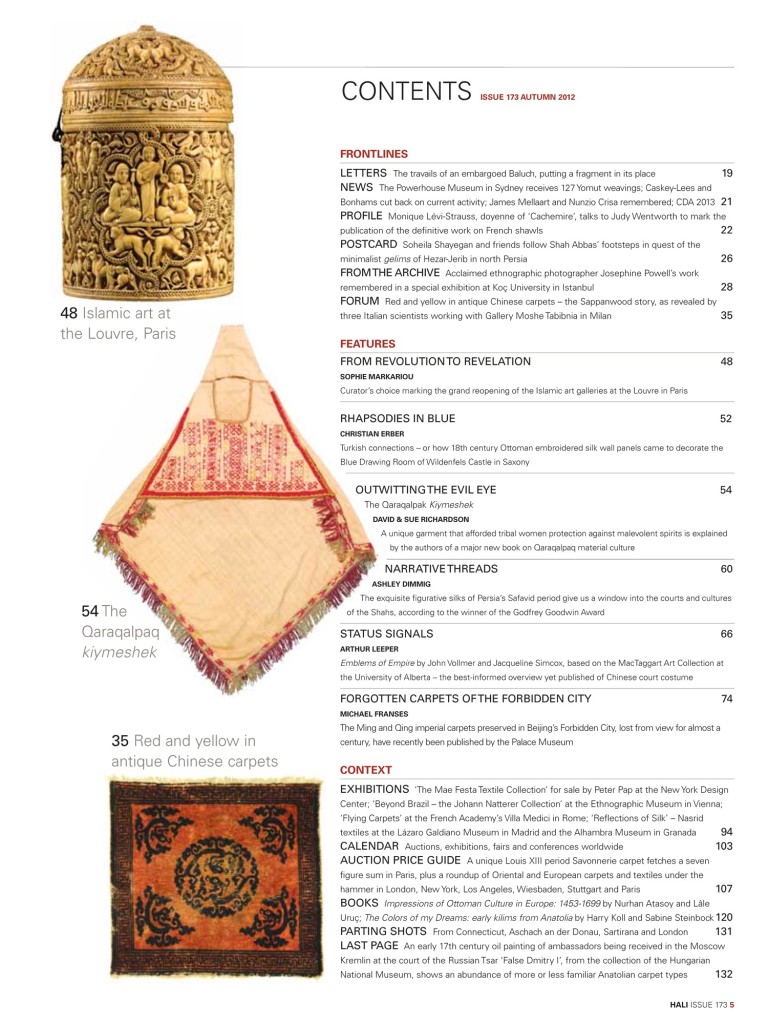 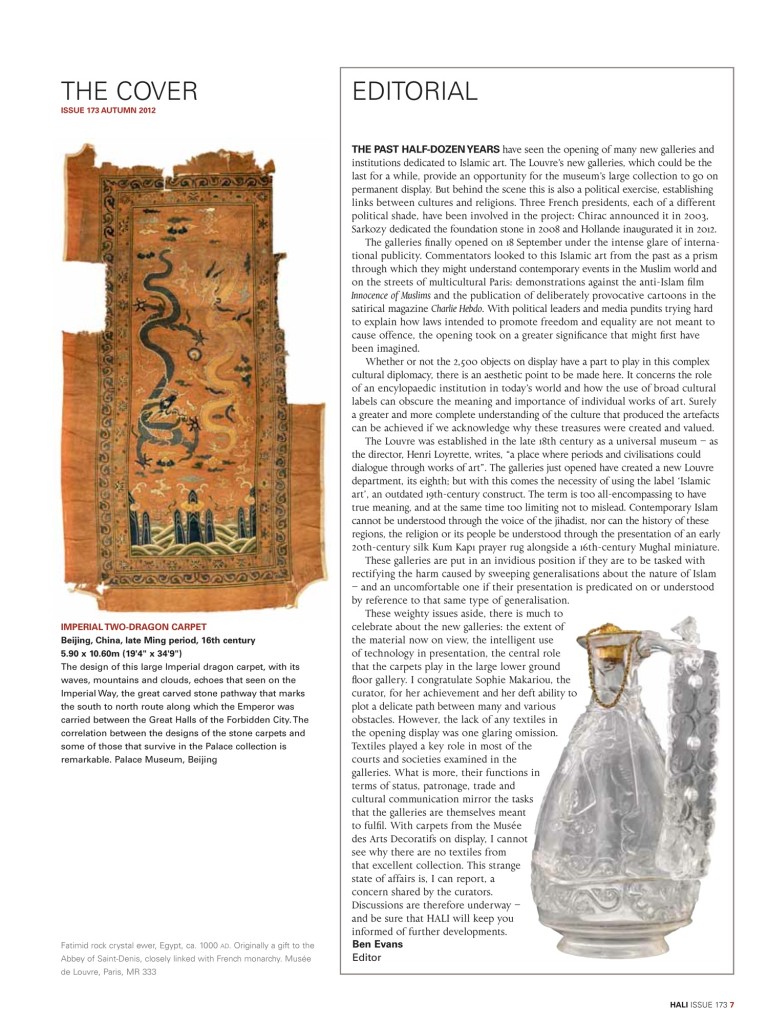 Letters: The travails of an embargoed Baluch, putting a fragment in its place

Profile: Monique Levi-Strauss, doyenne of ‘Cachemire’, talks to Judy Wentworth to mark the publication of the definitive work on French shawls

Postcard: Soheila Shayegan and friends follow Shah Abbas’ footsteps in quest of the minimalist oelims of Hezar-Jerib in north Persia

From the Archive: Acclaimed ethnographic photographer Josephine Powell’s work remembered in a special exhibition at Koc University in Istanbul

From Revolution to Revelation  Sophie Markariou

The exquisite figurative silks of Persia’s Safavid period give us a window into the courts and cultures of the Shahs, according to the winner of the Godfrey Goodwin Award

Emblems of Empire by John Vollmer and Jacqueline Simcox, based on the MacTaggart Art Collection at the University of Alberta — the best-informed overview yet published of Chinese court costume

The Ming and Oing imperial carpets preserved in Beijing’s Forbidden City, lost from view for almost a century, have recently been published by the Palace Museum

Exhibitions: ‘The Mae Festa Textile Collection’ for sale by Peter Pap at the NewYork Design Center; ‘Beyond Brazil — the Johann Natterer Collection’ at the Ethnographic Museum in Vienna; ‘Flying Carpets’ at the French Academy’s Villa Medici in Rome; ‘Reflections of Silk’ — Nasrid textiles at the Lazaro Galdiano Museum in Madrid and the Alhambra Museum in Granada

Auction Price Guide: A unique Louis XIII period Savonnerie carpet fetches a seven figure sum in Paris, plus a roundup of Oriental and European carpets and textiles under the hammer in London, New York, Los Angeles, Wiesbaden, Stuttgart and Pans

Books: Impressions of Ottoman Culture in Europe: 1453-7699 by Nurhan Atasoy and Lale Uruc; The Colors of my Dreams: early kilims from Anatolia by Harry Koll and Sabine Steinbock

Last Page: An early 17th century oil painting of ambassadors being received in the Moscow Kremlin at the court of the Russian Tsar ‘False Dmitry l’, from the collection of the Hungarian National Museum, shows an abundance of more or less familiar Anatolian carpet types