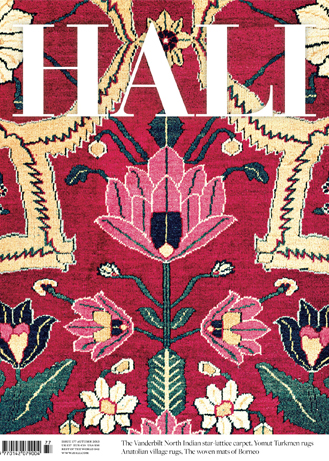 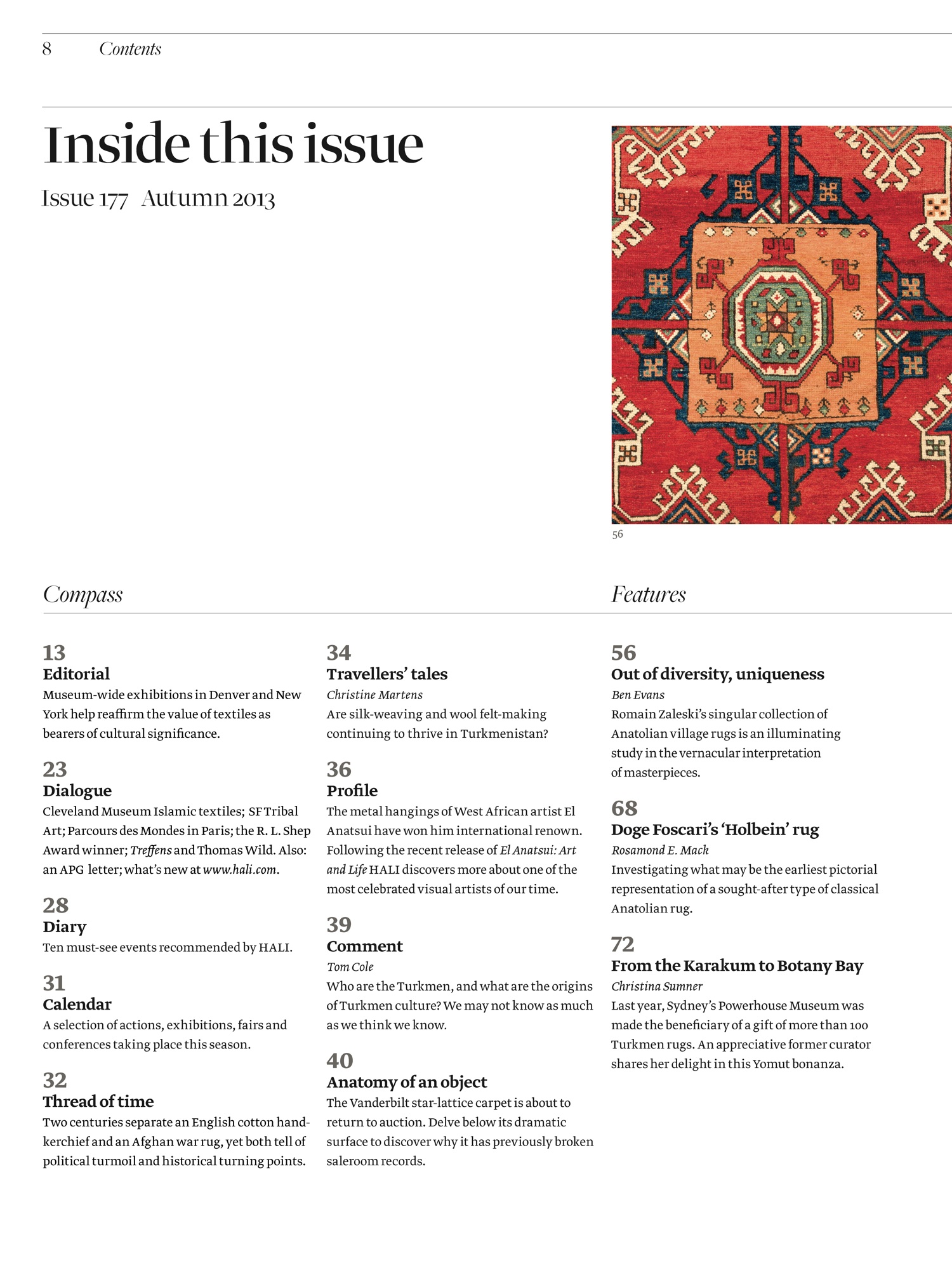 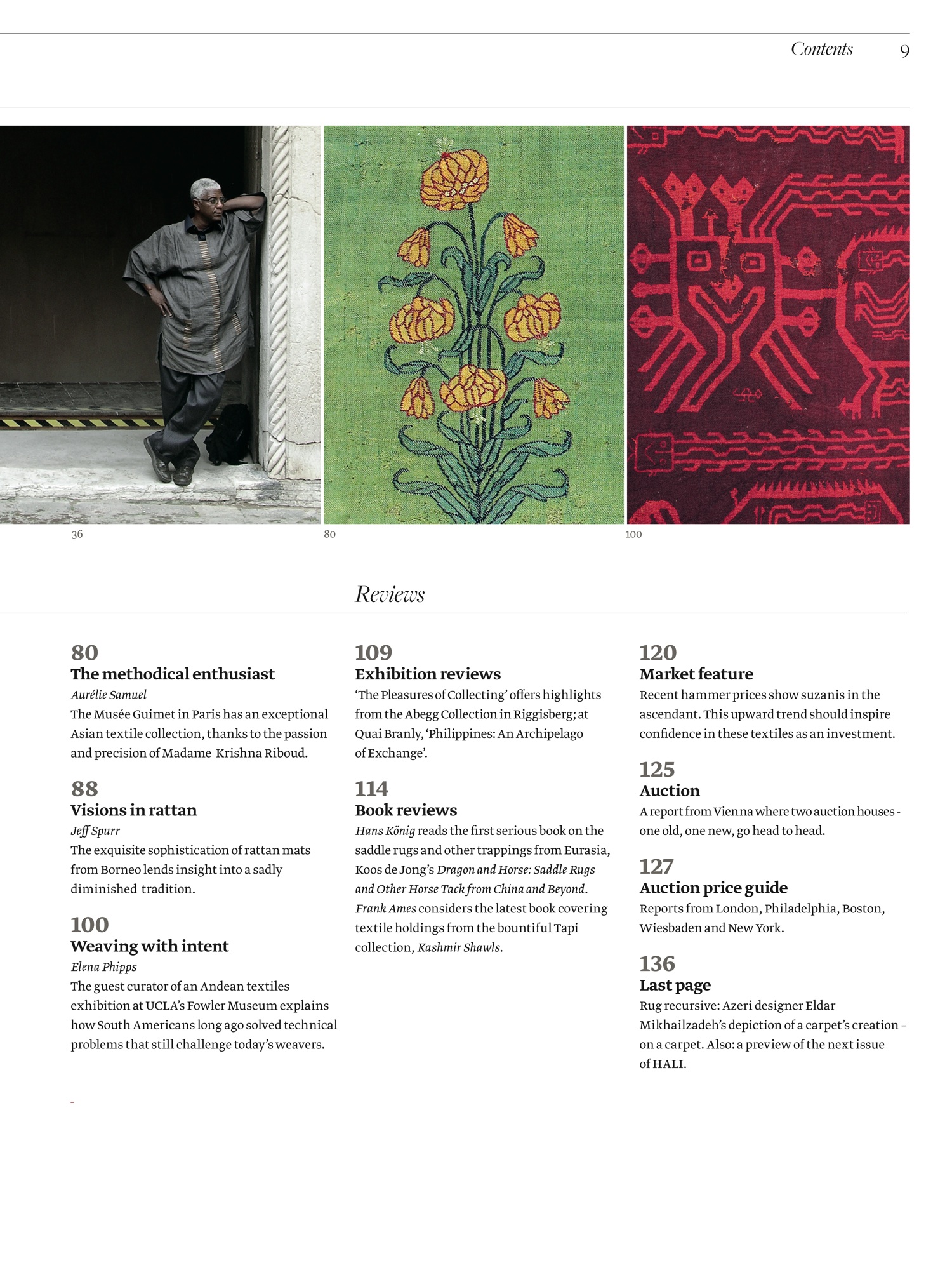 Editorial: Museum-wide exhibitions in Denver and New York help reaffirm the value of textiles as bearers of cultural significance.

Calendar: A selection of actions, exhibitions, fairs and conferences taking place this season.

Thread of time: Two centuries separate an English cotton handkerchief and an Afghan war rug, yet both tell of political turmoil and historical turning points.

Profile: The metal hangings of West African artist El Anatsui have won him international renown.  Following the recent release of El Anatsui: Art and Life HALI discovers more about one of the most celebrated visual artists of our time.

Comment: Tom Cole Who are the Turkmen, and what are the origins of Turkmen culture? We may not know as much as we think we know.

Anatomy of an object: The Vanderbilt star-lattice carpet is about to return to auction. Delve below its dramatic surface to discover why it has previously broken saleroom records.

Out of diversity, uniqueness: Ben Evans

Romain Zaleski’s singular collection of Anatolian village rugs is an illuminating study in the vernacular interpretation of masterpieces.

Investigating what may be the earliest pictorial representation of a sought-after type of classical Anatolian rug.

From the Karakum to Botany Bay: Christina Sumner

Last year, Sydney’s Powerhouse Museum was made the beneficiary of a gift of more than 100 Turkmen rugs. An appreciative former curator shares her delight in this Yomut bonanza.

The Musée Guimet in Paris has an exceptional Asian textile collection, thanks to the passion and precision of Madame  Krishna Riboud.

The exquisite sophistication of rattan mats from Borneo lends insight into a sadly diminished  tradition.

‘The Pleasures of Collecting’ offers highlights from the Abegg Collection in Riggisberg; at Quai Branly, ‘Philippines: An Archipelago of Exchange’.

Hans König reads the first serious book on the saddle rugs and other trappings from Eurasia, Koos de Jong’s Dragon and Horse: Saddle Rugs and Other Horse Tack from China and Beyond.

Recent hammer prices show suzanis in the ascendant. This upward trend should inspire confidence in these textiles as an investment.

A report from Vienna where two auction houses – one old, one new, go head to head.

Rug recursive: Azeri designer Eldar Mikhailzadeh’s depiction of a carpet’s creation – on a carpet. Also: a preview of the next issue of HALI.