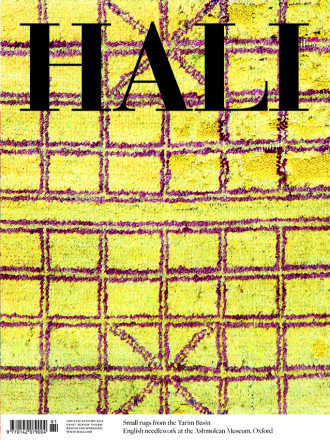 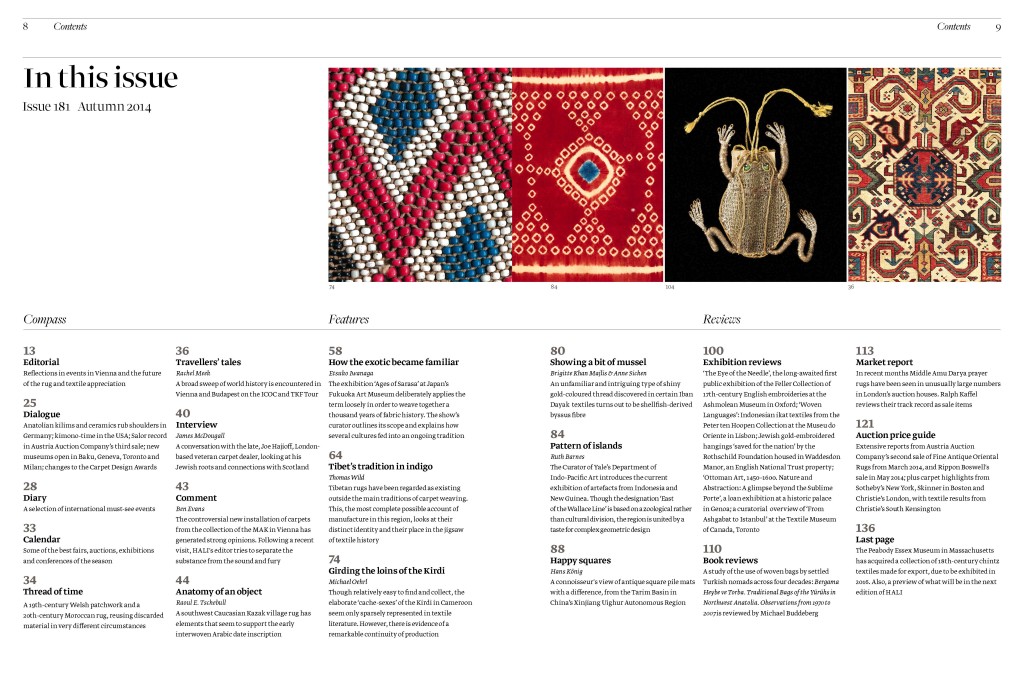 Editorial: Reflections on events in Vienna and the future of the rug and textile appreciation

Interview James McDougall  A conversation with the late, Joe Hajioff, London- based veteran carpet dealer, looking at his Jewish roots and connections with Scotland

Comment Ben Evans The controversial new installation of carpets from the collection of the MAK in Vienna has generated strong opinions. Following a recent visit, HALI’s editor tries to separate the substance from the sound and fury

How the exotic became familiar Etsuko Iwanaga The exhibition ‘Ages of Sarasa’ at Japan’s Fukuoka Art Museum deliberately applies the term loosely in order to weave together a thousand years of fabric history. The show’s curator outlines its scope and explains how several cultures fed into an ongoing tradition

Tibet’s tradition in indigo Thomas Wild Tibetan rugs have been regarded as existing outside the main traditions of carpet weaving. This, the most complete possible account of manufacture in this region, looks at their distinct identity and their place in the jigsaw of textile history

Girding the loins of the Kirdi Michael Oehrl Though relatively easy to find and collect, the elaborate ‘cache-sexes’ of the Kirdi in Cameroon seem only sparsely represented in textile literature. However, there is evidence of a remarkable continuity of production

Pattern of islands Ruth Barnes The Curator of Yale’s Department of Indo-Pacific Art introduces the current exhibition of artefacts from Indonesia and New Guinea. Though the designation ‘East of the Wallace Line’ is based on a zoological rather than cultural division, the region is united by a taste for complex geometric design

‘The Eye of the Needle’, the long-awaited first public exhibition of the Feller Collection of 17th-century English embroideries at the Ashmolean Museum in Oxford; ‘Woven Languages’: Indonesian ikat textiles from the Peter ten Hoopen Collection at the Museu do Oriente in Lisbon; Jewish gold-embroidered hangings ‘saved for the nation’ by the Rothschild Foundation housed in Waddesdon Manor, an English National Trust property; ‘Ottoman Art, 1450–1600. Nature and Abstraction: A glimpse beyond the Sublime Porte’, a loan exhibition at a historic palace in Genoa; a curatorial  overview of ‘From Ashgabat to Istanbul’ at the Textile Museum of Canada, Toronto

A study of the use of woven bags by settled Turkish nomads across four decades: Bergama Heybe ve Torba. Traditional Bags of the Yürüks in Northwest Anatolia. Observations from 1970 to 2007 is reviewed by Michael Buddeberg

The Peabody Essex Museum in Massachusetts has acquired a collection of 18th-century chintz textiles made for export, due to be exhibited in 2016. Also, a preview of what will be in the next edition of HALI