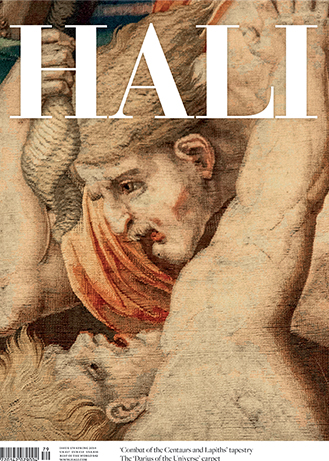 This season features vanishing textile crafts in Iran, appliquéd Egyptian tents which have received little attention in the past, perak headdresses from north India used to ward off evil and the return of the gabbeh from Zollanvari. Michael Franses returns to HALI along with a report on the Darius of the Universe Carpet, and his brother Simon reviews a Fontainebleau Tapestry at the Palazzo Strozzi, Florence.

Editorial: Reflections on carpet and textile issues arising from the Editor’s recent trip to Yerevan in the republic of Armenia.

Calendar: Some of the auctions, exhibitions, fairs and conferences taking place this season.

Thread of time: A comparison of two textiles from Oxford’s Pitt Rivers Museum relates a man’s ceremonial shoulder cloth from the island of Sumba to a printed cotton skirt cloth made in Manchester, England during the mid-1930s.

Travellers’ tales: Cheri Hunter From worms to weaving – a close look at sericulture on a tour of Thai village industries that enjoy royal support.

Comment: Jeff Spurr In a letter to the editor,  Jeff Spurr responds to issues raised by Frank Ames in his review of the author’s essay in Kashmir Shawls: The Tapi Collection.

Anatomy of an object: An examination of a little-known carpet fragment, the most complete of the early pile carpets featured in Friedrich Spuhler’s newly published Pre-Islamic Carpets and Textiles. Features

Local colour: Chris Buckley The author explains the secrets of the Tibetan aprons, from the use of a wide range of natural dyes to the quality of the wool and weaving and the distinctive designs.

Pavilions of splendour: Sam Bowker Singing the praises of khayamiya – Egyptian appliquéd tents  – which have received little scholarly attention but are both spectacular and functional, and are still used on a grand scale.

Heading off evil at high altitude: Jaina Mishra Worn by Ladakhi women in the north of India, the perak headdress is seen as a powerful protection against harm and a binding force for the community.

Out of the shadow: Michael Franses This summer the ‘Darius of the Universe’ carpet moves centre stage at Milan’s Poldi Pezzoli Museum after conservation.

The father of the gabbeh: Colin Wilde Once, the gabbeh was the humblest and least desirable of Iranian rugs. Thanks to its ‘reinvention’ by Gholam Reza Zollanvari, it is now a highly sought-after textile.

A woven fresco: Simon Franses An exhibition at the Palazzo Strozzi in Florence provides a rare opportunity to see The Battle of the Centaurs and Lapiths, an  exceptional Fontainebleau Tapestry.

The first book in a series planned by the China International Publishing Group and Yale University Press, Chinese Silks is reviewed here by Nancy Arthur Hoskins.

Jonathan Hope finds a lively mixture of fine arts attracting both attention and sales in the world’s premier art fair,  TEFAF in Maastricht.

Judith Glass hails the success of the 31 January 2014 auction of 175 ‘Carpets and Textiles from Distinguished Collections’ at Sotheby’s in New York.

Looking at the recent San Francisco tribal art show, Tom Cole highlights an urgent need for traditional rug and textile dealers to rethink the manner and mode of their presentation.

Reports mainly from Sotheby’s New York 31 January 2014 sale and from Rippon Boswell in Wiesbaden in November 2013.