A Sardinian funeral rug at Sartirana 2014

On first glance this colourful flatweave looks like a Persian kilim. But, as Alberto Boralevi reveals, it is in fact a rare Italian peasant rug, with a purpose that makes it central to important local rites

For its 10th anniversary, the 2014 Sartirana Textile Show (10–14 September) will feature a special loan exhibition of some forty rare antique Italian peasant rugs, bench covers, wall hangings and bedspreads, woven in various techniques, from Sardinia, Abruzzi, Calabria and other parts of southern Italy. Among the pieces on display will be this very unusual tapestry-woven funerary kilim, known as a tapinu ‘e mortu (rug for the dead).

At first sight this kilim, which is woven in slit-tapestry with some dovetailing, could be an Oriental weaving, perhaps from Fars in southwestern Persia or from the Transcaucasus/Azerbaijan region. In fact it is the result of a totally different story, having been made in the village of Orgosolo in Barbagia County, northern Sardinia, once known as the ‘village of murderers’ owing to its high crime rate and reputation for banditry.

Tapinu ‘e mortu are the rarest type of Sardinian peasant weaving, made until the mid-19th century on a traditional vertical loom. Family heirlooms, they were woven by village women to place beneath the dead body of an important man or woman during the funeral. Only rich families could afford to own one of these funeral rugs.

Tapinu have now completely disappeared from use, and very few examples are known to survive, mostly in public collections. We know of eight in Sardinian museums and one in the Boston Museum of Fine Arts, but it is likely that a handful of other tapinu are still jealously preserved in private hands on the island.

This particularly beautiful piece dates from the late 18th or early 19th century and is perfectly preserved. It is the only known tapinu that depicts a fantastic animal in the central panel instead of a simple geometric motif; it also includes a wealth of other small stylised two- and four-legged animals, small crosses, star medallions, and an arrowhead or trefoil border.

I found this tapinu in 1981 when it appeared in an Italian antiques magazine that had a special feature about kilims – some Persian, some Anatolian and some Caucasian, plus one labelled ‘possibly Persian, but still being researched’. A few weeks before, by chance, I had come across an old pre-World War II catalogue for an exhibition of Sardinian Textiles that included two similar kilims described as ‘Tapinu de Mortu’ from Orgosolo.

I acquired the tapinu ‘e mortu and later sold it to the famous Italian collector Dr Marino dall’Oglio, one of the very few people at that time who understood and appreciated Italian peasant weaving. Despite its original purpose, it is a joyful piece! 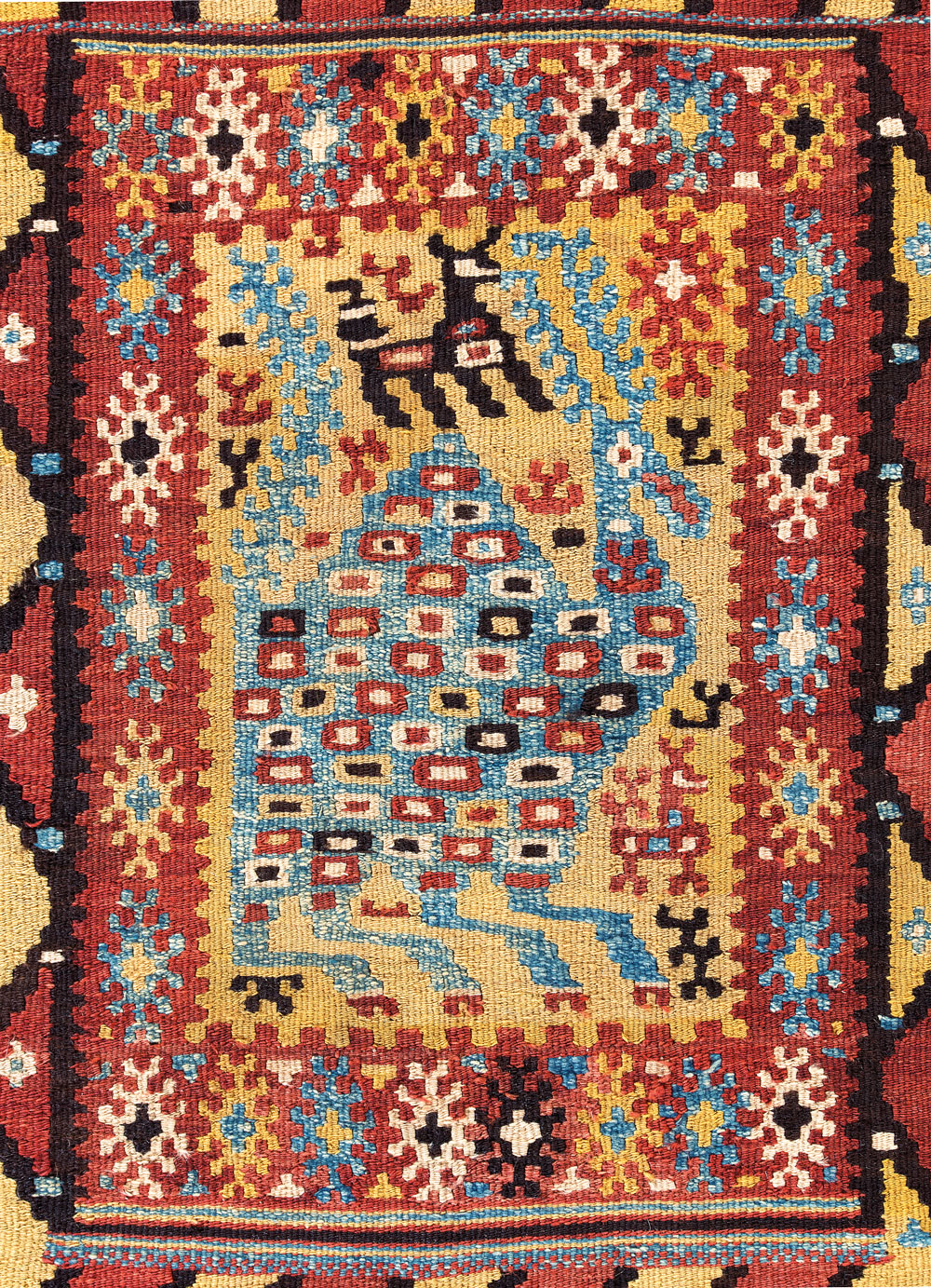 It is difficult to identify what kind of animal is represented here; it has been suggested that it could be a rabbit or a hare, while others believe it is a stag with long pronged antlers. In other known examples we see simple geometric forms or, in at least one example in the Museo di Nuoro, two stylised elebelinde-like female figures wearing skirts. In many other respects that piece is particularly close to the example shown here. 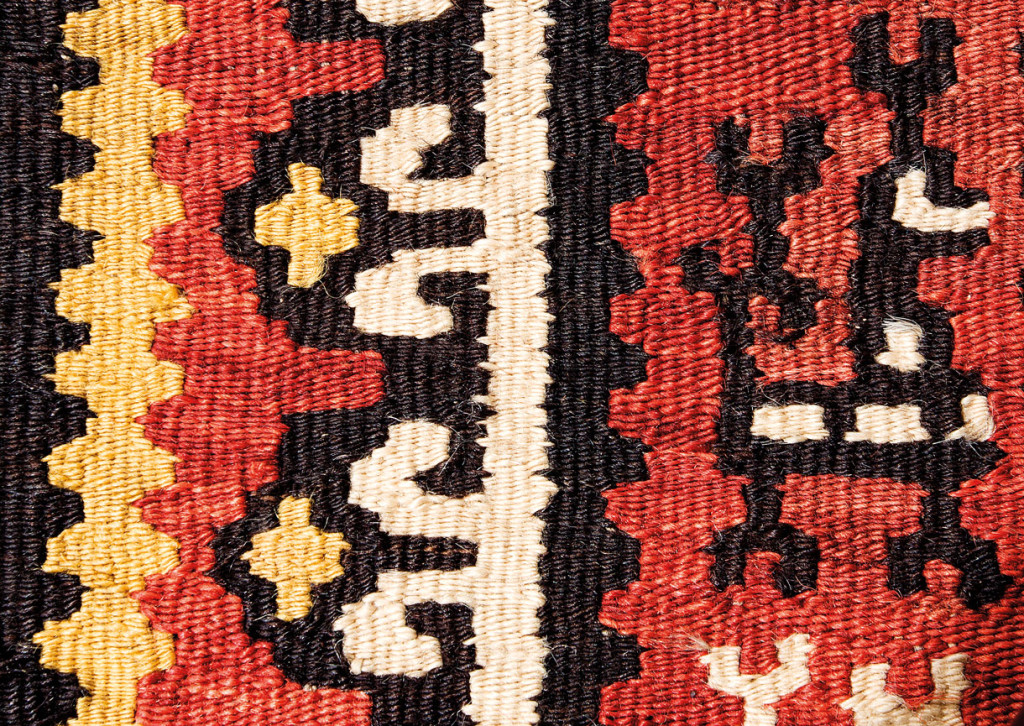 Both tapinu ‘e mortu and a type of bed cover woven in the village of Oliena, known locally as a fressada, employed a combination of slit-and dovetail tapestry. Italian peasant weavings were mostly in a weft-brocading technique found in Sardinia, the Abruzzi, Sicily and elsewhere in southern Italy. Tapestry was only used in Nule and other villages in the northern part of Sardinia. 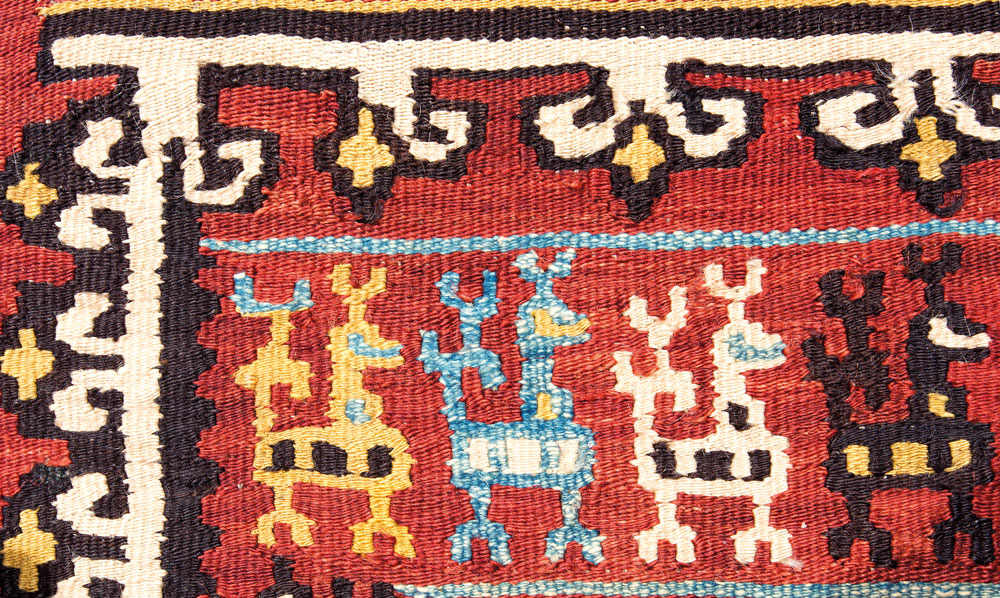 The traditional population of Sardinian textiles incorporates double-headed eagles, peacocks and other birds, griffins and dragons, as well as stylised human figures and floral motifs that bear an uncannily close resemblance to those seen on a wide range of oriental rugs and kilims. The particular design elements used here include small stylised animals, some with two legs, perhaps chickens or peacocks, while others are four-legged, and may represent stags, rabbits, dogs, sheep or goats, In addition there are star medallions, rosettes, small crosses, and an arrowhead or trefoil border. 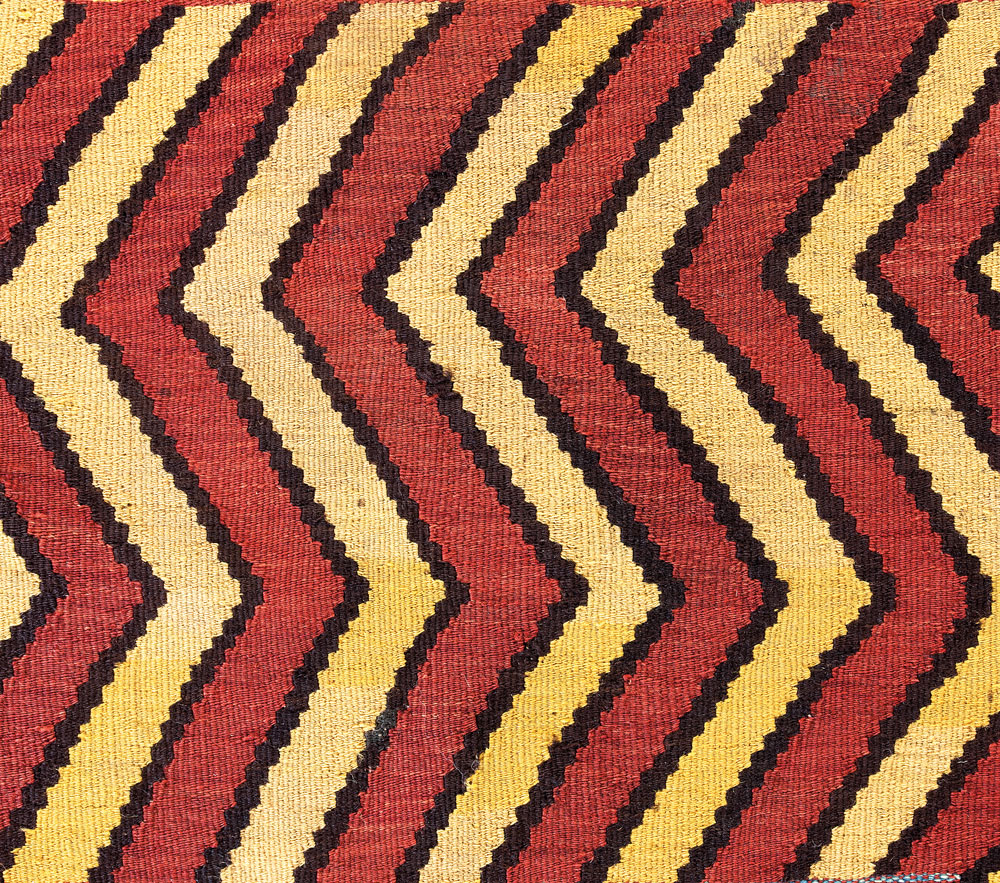 The red and yellow zig-zag bands in the field – usually vertical as here, but also seen as a horizontal chevron (with or without the central panel) – are the only common design feature shared by all known tapinu ‘e mortu. The zig-zags symbolise water, with the meaning of purification. All the colours are naturally dyed. The red dyestuff used in Sardinian textiles is almost certainly madder, which is common on the island, while the yellow is probably derived from costly saffron, with the dark purple-red probably obtained from the residue of red wine-making. The white and the light blue are cotton.