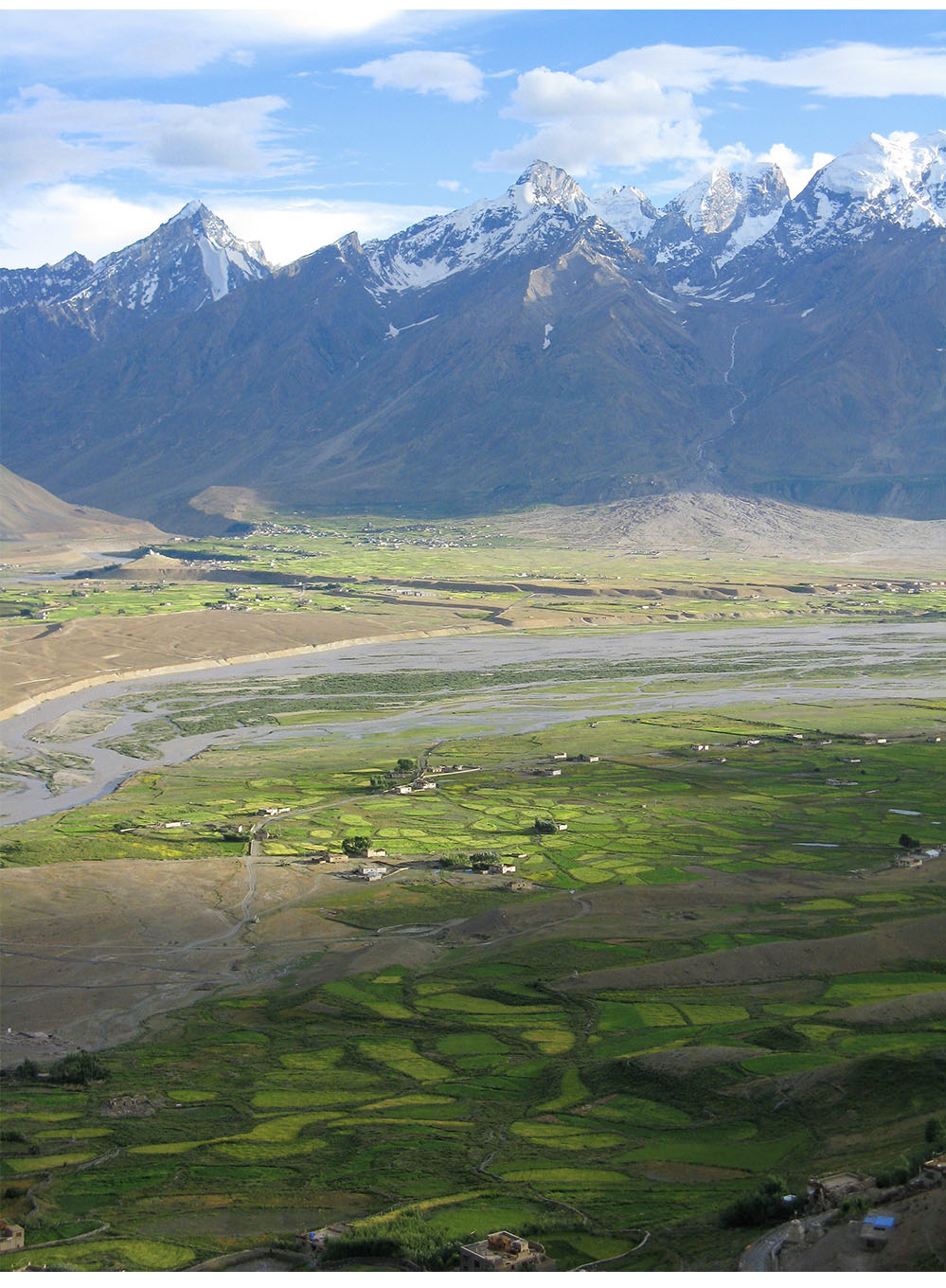 The village of Padum, capital of Zanskar, is visible in the distance beyond the Zanskar River against the backdrop of the Great Himalaya Range

‘Lodged deep in the Indian Himalayas, the formerly independent kingdom of Ladakh lies firmly within the Tibetan cultural sphere. It is a land of high mountain passes situated at the crossroads of old caravan routes leading east to Lhasa, west to Kashmir, south to India, and north to the oasis towns of Chinese Turkestan. To tourists and dreamers, Ladakh opens an imagined window into Tibet’s past – a region redolent of its eastern neighbour, yet spared Chinese domination. Much evokes a certain nostalgia, as Ladakhi dialects relate to Tibetan, Ladakhi architecture mirrors the compact whitewashed structures of the central Tibetan Plateau, and imposing monasteries bear witness to a majority Buddhist faith. 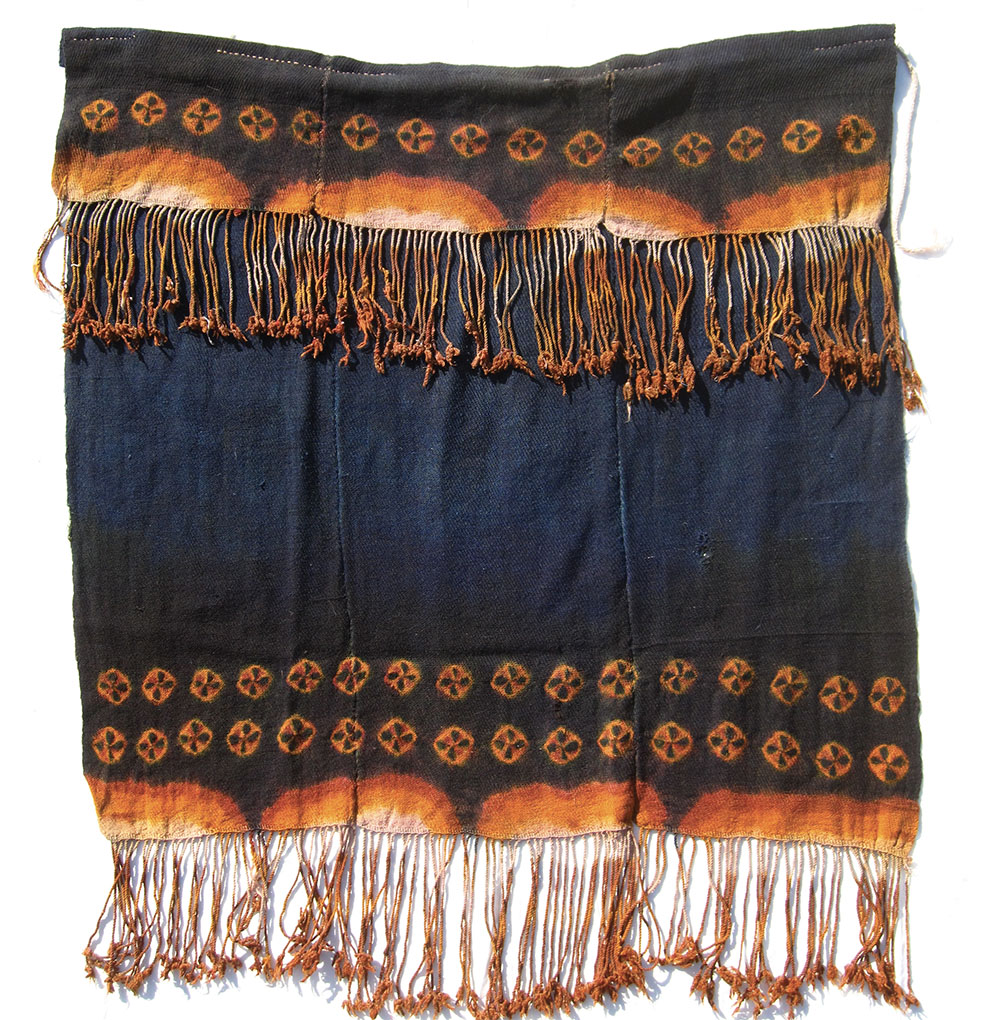 A closer look, however, reveals differences that not only bespeak Ladakh’s historical independence, but also illuminate internal variations in the twilight of local traditions. This essay reports on trips undertaken in the summers of 2009 and 2010 to study, rather informally, through village visits and interviews, tigma-patterned woollen textiles – Ladakhi women’s gonchas dresses and the liktse capes of Zanskar. 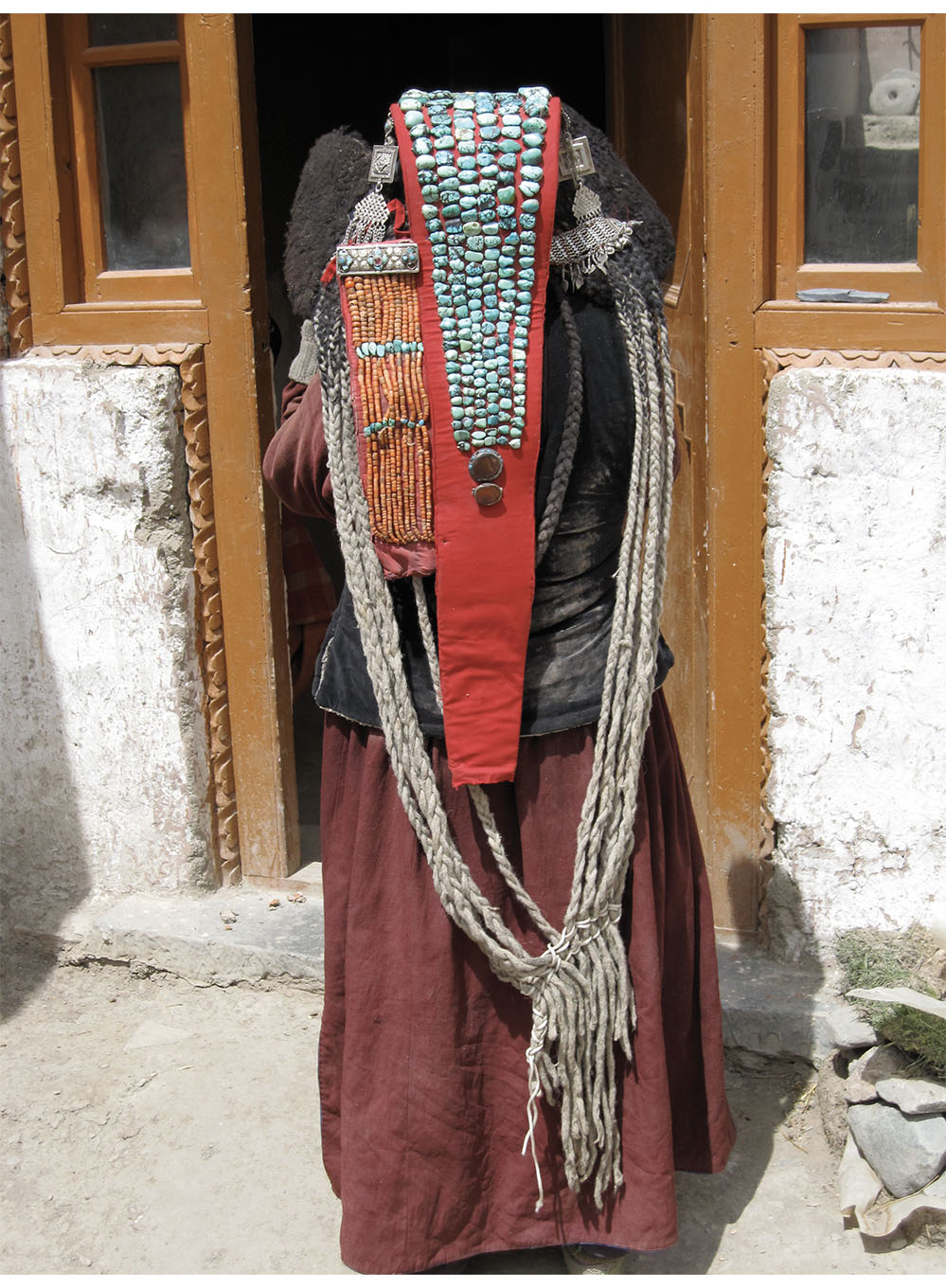 The tigma is an effective little decorative device: a simple cross, often inscribed in a light circle on dark ground, that takes its name from the tie- and fold-dyeing technique that creates it. Tigma patterning is ancient, glimpsed, for example, in the frescos of the 12th-century temples at Alchi, which preserve the oldest extant pictorial sources on Ladakhi dress. Tigma adorn all manner of secular attire in Ladakh and Tibet: dresses, coats, capes, shoes, vests, aprons, belts, blankets, seat covers, and saddlecloths. They stand out as a characteristic motif in a region not otherwise known for rigours of pattern dyeing. Whereas the tigma themselves are so basic as not to vary much across the region, the textiles that they enliven do differ according to local traditions. 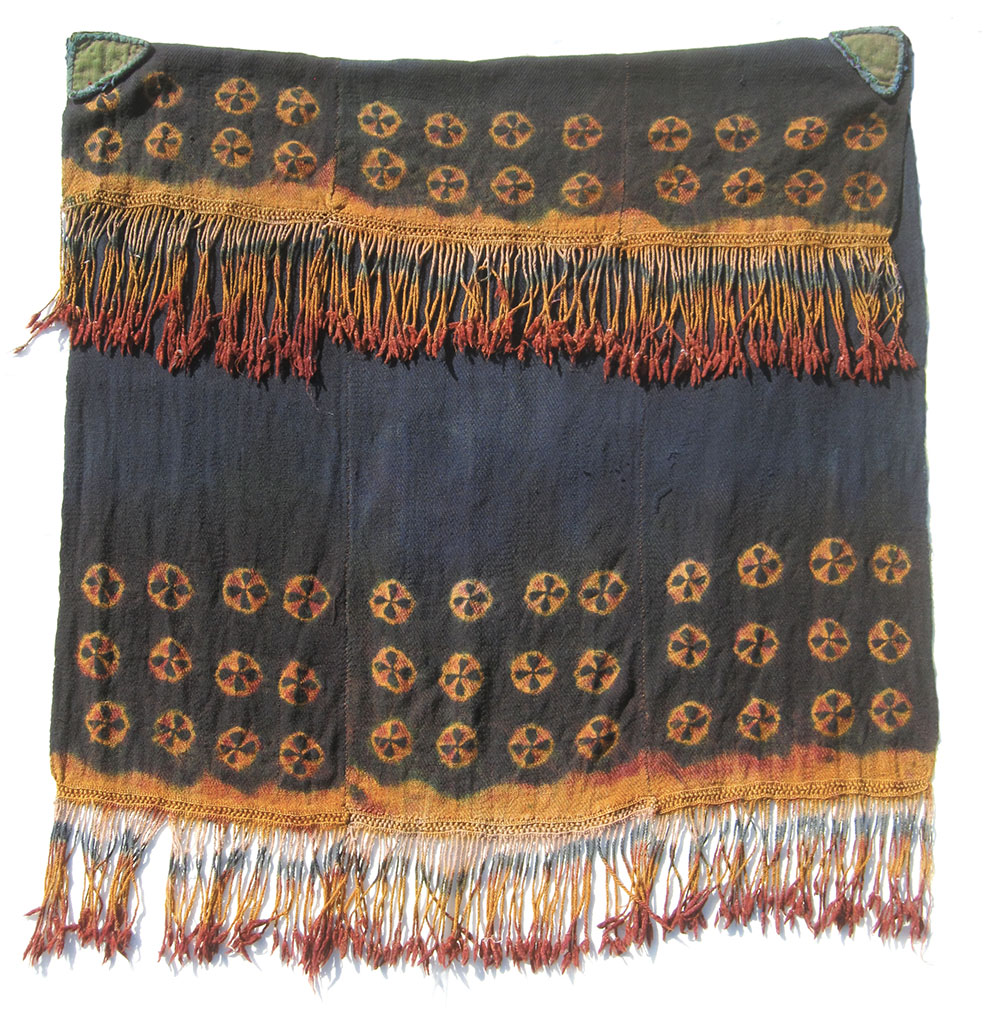 One locally specific tie-dyed garment that has hitherto escaped detailed scrutiny is the tigma-decorated liktse cape of Zanskar. To this day the Zanskar Valley remains one of the most remote areas of the Himalayas. Historically and culturally part of Ladakh, it is separated from the Indus Valley to the north by impassable gorges and high passes. Accessible via a single treacherous road for five months of the year, the preferred approach for all who cherish life remains a choice of weeklong treks from either north or south. 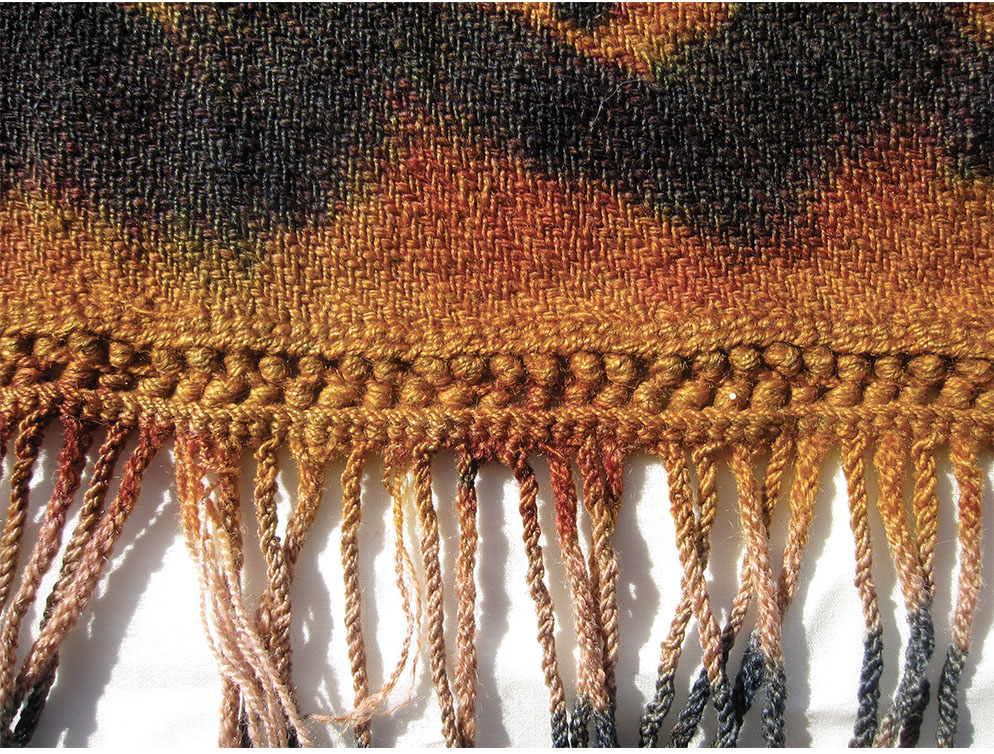 Capes are one of the three central elements of traditional women’s costume, comprising an ankle-length outer dress or coat, a cape, and headdress – historically the stately turquoisestudded perak, still worn on special occasions, and latterly any manner of hat – across all of Ladakh. Capes reaching to the hips or knees exist in several variants. All capes are rectangular pieces of cloth or fur worn around the shoulder or lower back and tied by strings or laces in the front. Buttons or fabric triangles (rogsden) sometimes decorate and strengthen the upper corners where the ties are attached. The lower edge is commonly fringed. In Zanskar, fringes extend from both the bottom and the top end, and the upper portion is folded over to form a fringed top panel. 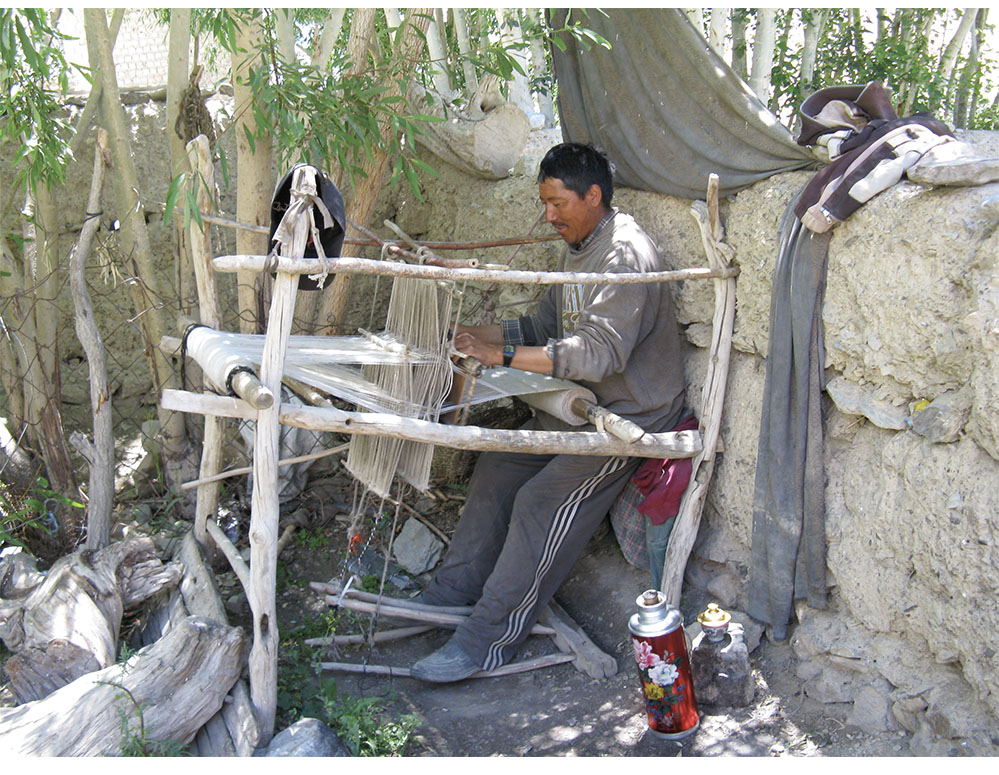 A number of different types of capes are worn across Ladakh. Around Leh, along the Indus Valley, fancy, brightly coloured capes of Chinese silk brocade, or machine-embroidered capes of felted, often green, wool fabric are called bog (sbogs). Villagers say that silk brocade (hashi) bog and embroidered bog have been en vogue for several decades, but they nonetheless consider them a fairly recent fashion. In fact contemporary bog descend from the expensive capes of the aristocracy, as illustrated by a 1947 photograph from Stok Palace, south of Leh, in which Queen Nyilza Angmo wears a richly embroidered velvet bog. In and around Leh, bog are fashion items that belong to proper festival attire, but they are not commonly worn today. Capes lined or fringed with white goat hair are called jokar and are worn throughout the region and especially in eastern Ladakh among the nomads of Changtang and Rupshu. 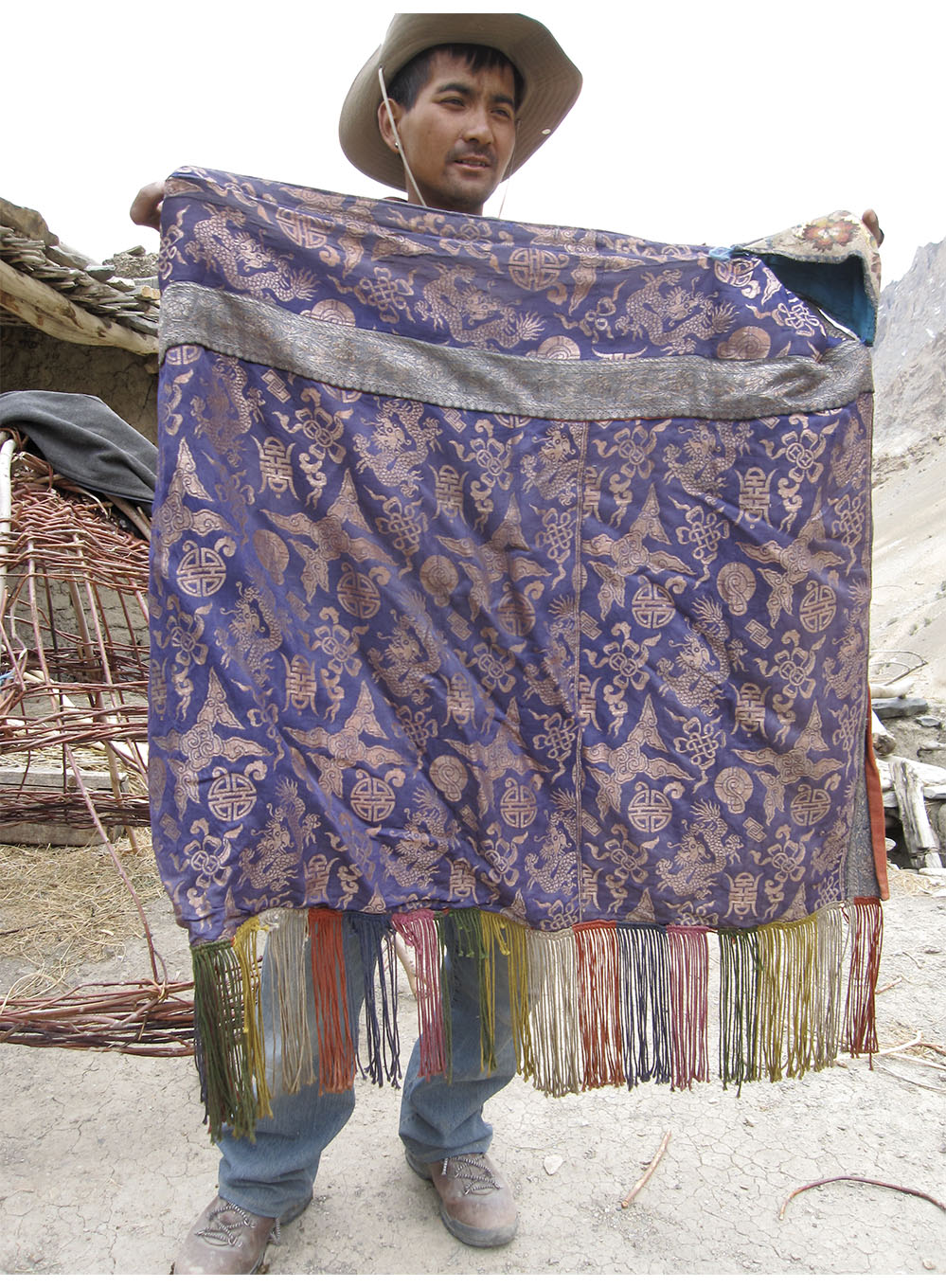 Lhokpa are sturdy white longhaired goatskin capes. Judging by the frequency, if not to say exclusivity, with which they appear in early photographs, historically lhokpa may have been the most common type of cape in central Ladakh. They are still regularly worn in the high mountain villages between the Indus Valley and Zanskar, where even younger women rarely venture into public sans lhokpa. Villagers often report that fancy bog are suitable summer dress, whereas lhokpa are to be worn in winter. However, I saw not a single bog-bedecked back during several weeks of village visits in the summers of 2009 and 2010, except when women modelled their finery at our request. Whereas Monisha Ahmed reports, and villagers confirmed, that lhokpa are a dying tradition in the Indus Valley, they are the only kind of cape I saw daily on a trek into Zanskar. 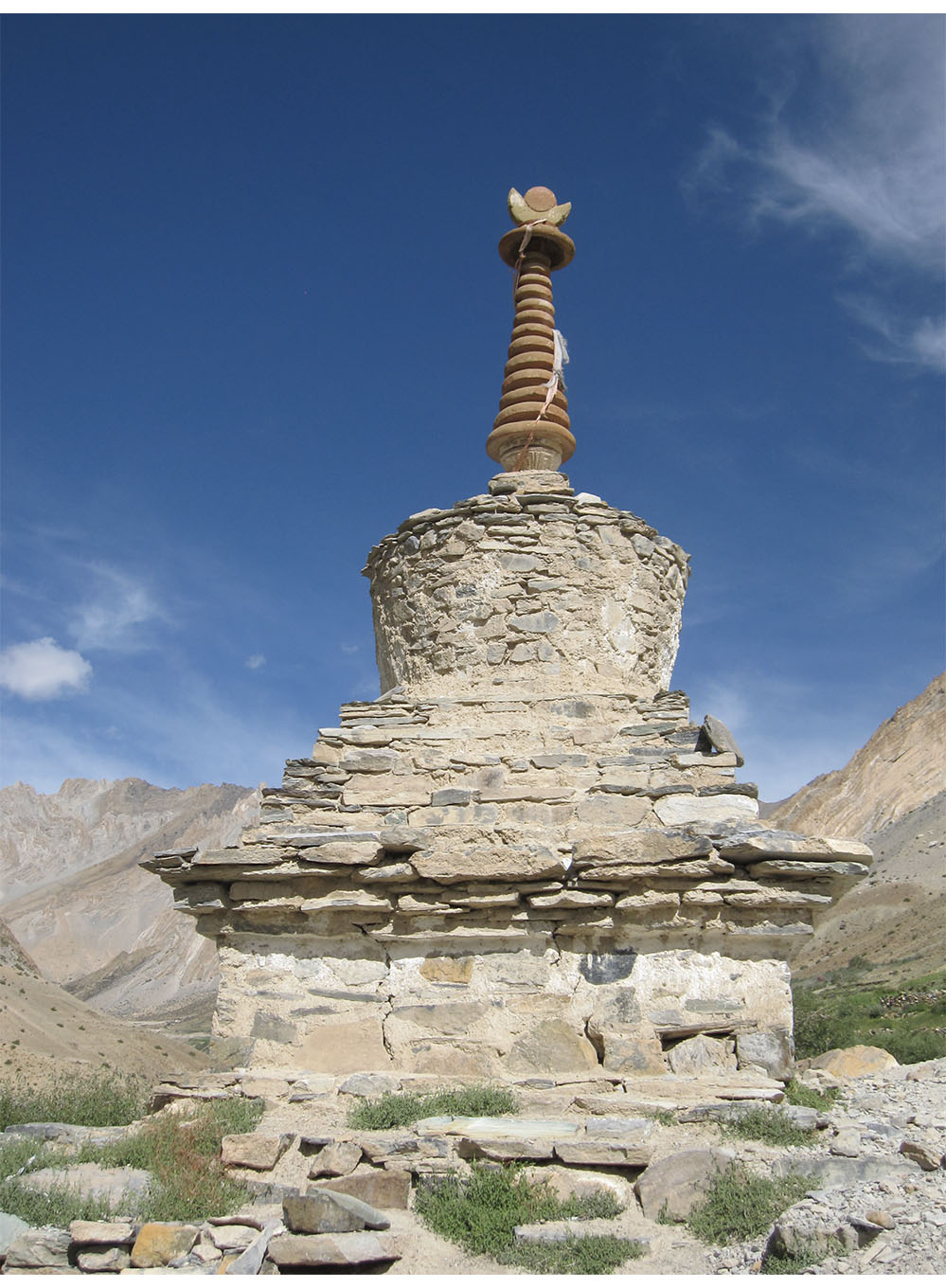 Liktse capes are native and exclusive to Zanskar. Rarely photographed and to the best of my knowledge not previously described, liktse are pliant wool rectangles, always dyed dark blue and decorated with rows of yellow or red tigma along the top and bottom fringe. 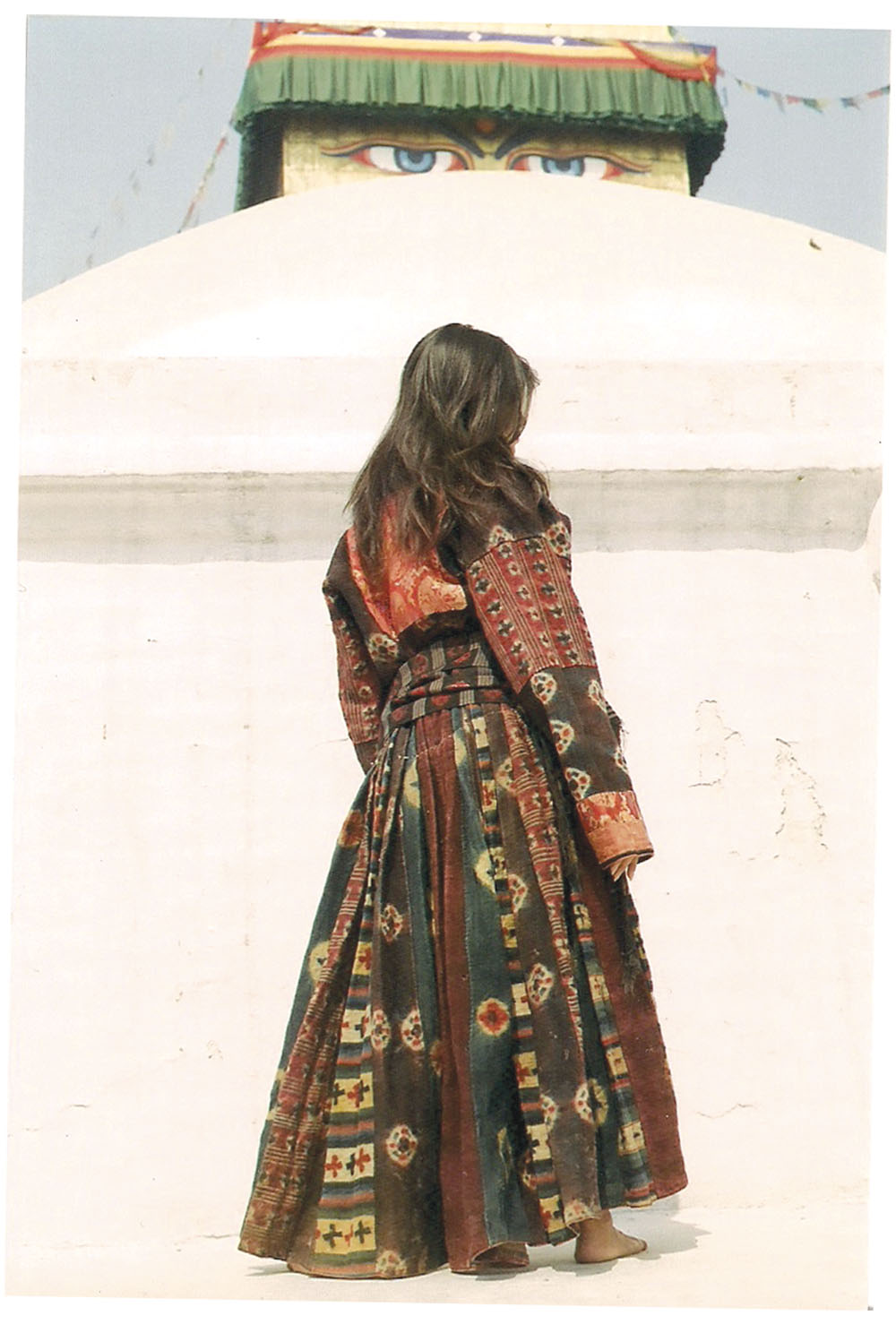 Liktse with two horizontal rows of tigma on each end are most common, although examples with up to five rows are occasionally found. Top and bottom of the liktse end in one or more narrow tie-dyed bands of yellow or red and long corded warp fringes (katsar). The katsar are usually coloured in bands of blue, yellow, red, and natural white, and are tied or knotted into various decorative designs to secure the weft. Minor design variations are the result of chance and taste and do not, according to local informants, reflect regional differences or age or status of the wearer… 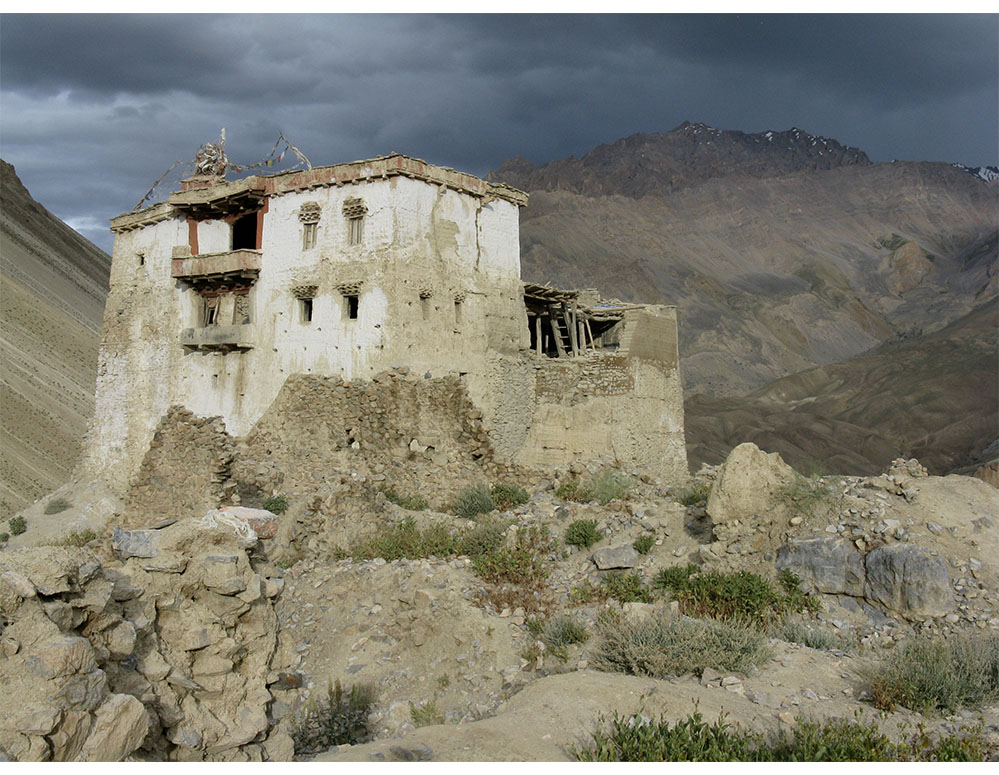 The old palace at Zangla, Zanskar

The second type of tigma-embellished garment of note is the spectacular Ladakhi striped gonchas, a colourful, distinctively striped woollen women’s coat or dress that was once worn, in variations, throughout the region from Zanskar to western Tibet. There seems to be no standard nomenclature regarding these dresses either in the literature or locally in the field. Terminology is in flux as different regions and villages within Ladakh have different names for the same item, and a specialised term known to older women may not be known to, or similarly used by, their husbands or daughters.

Read more via the digital HALI Archive, available to all HALI subscribers. 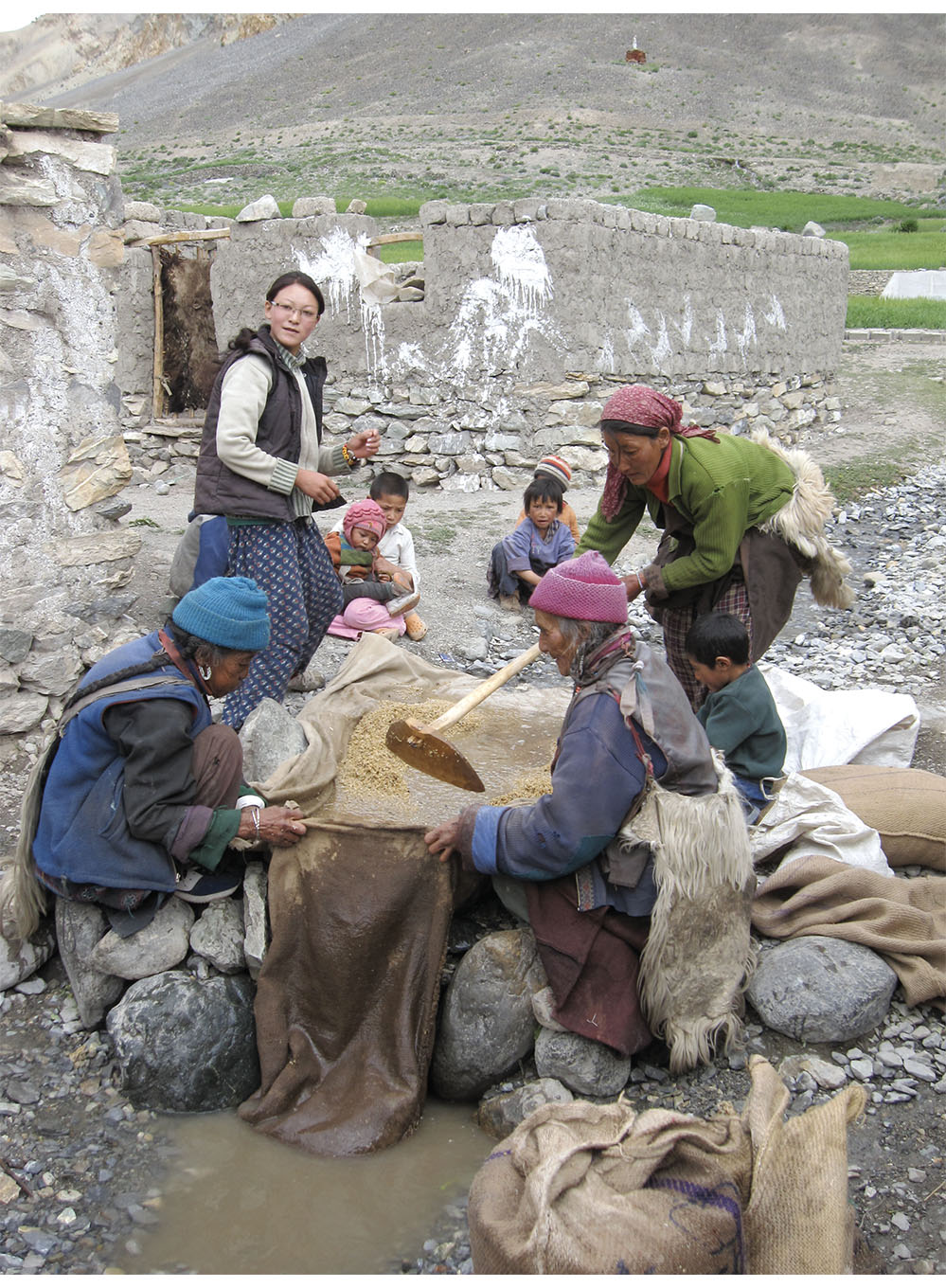 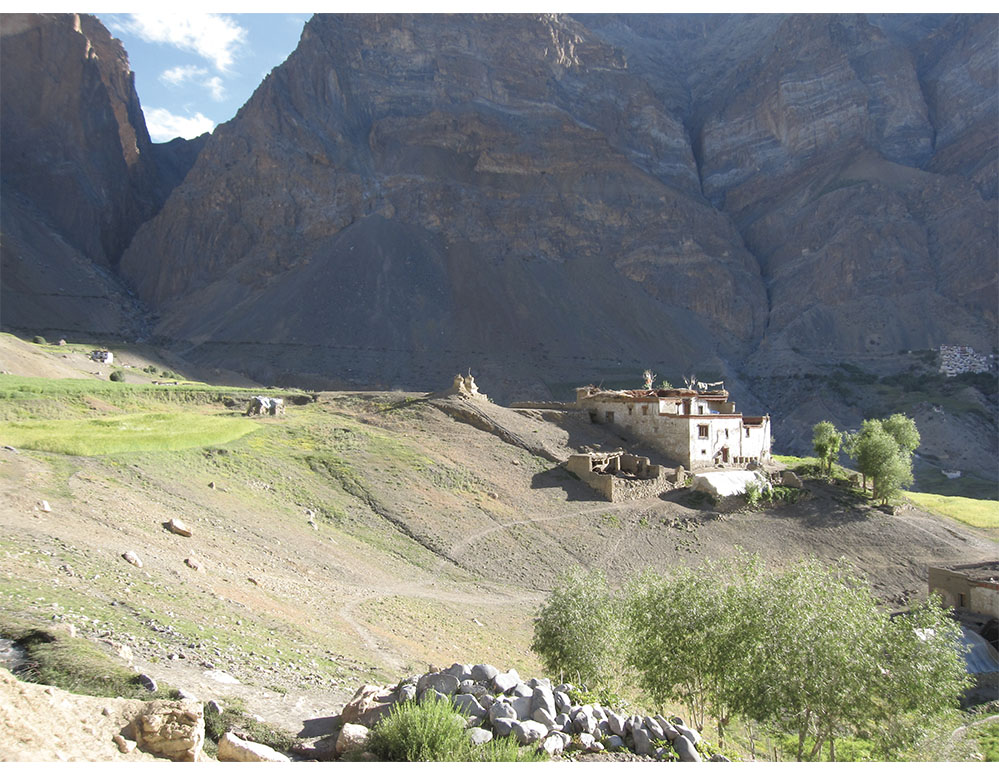 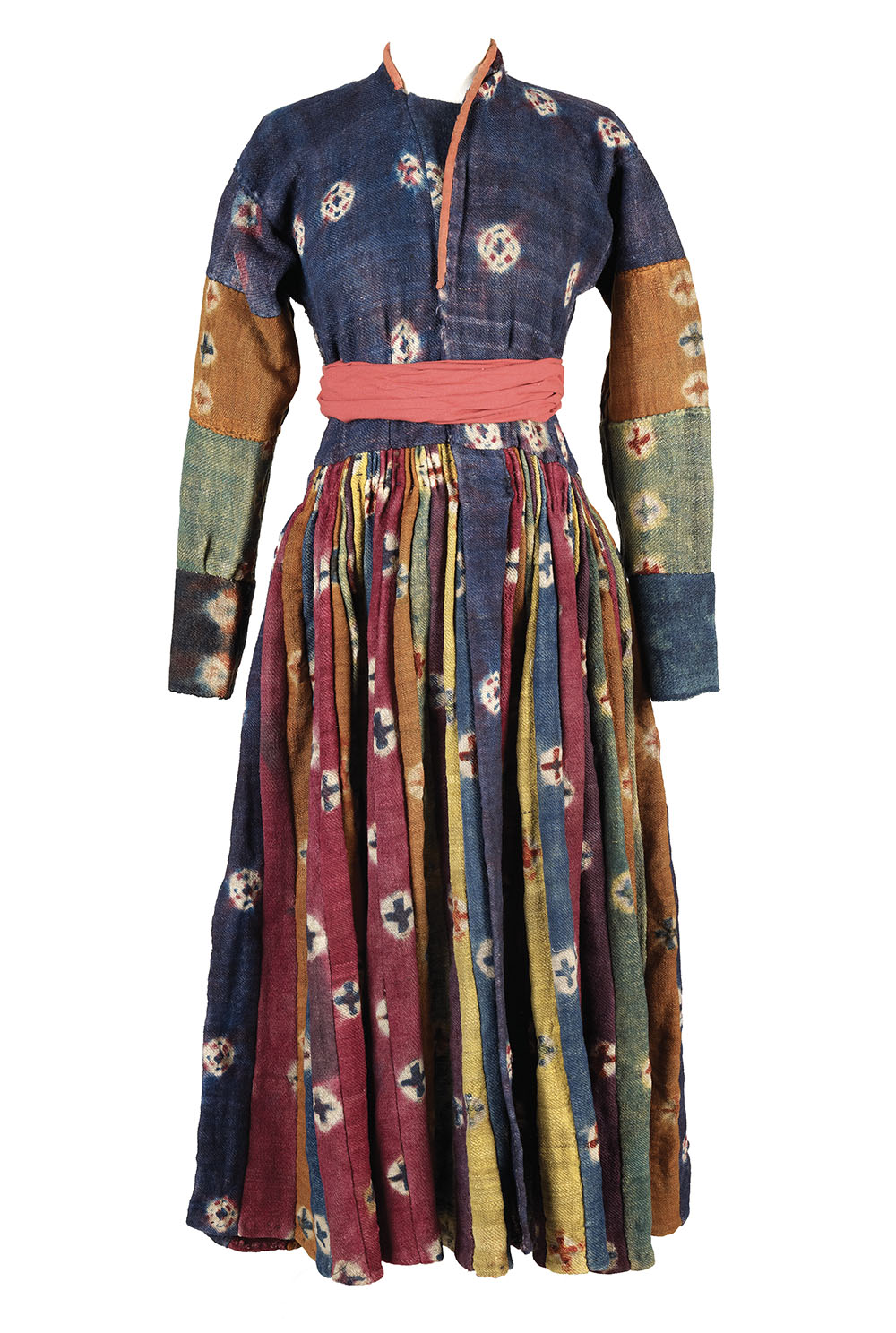 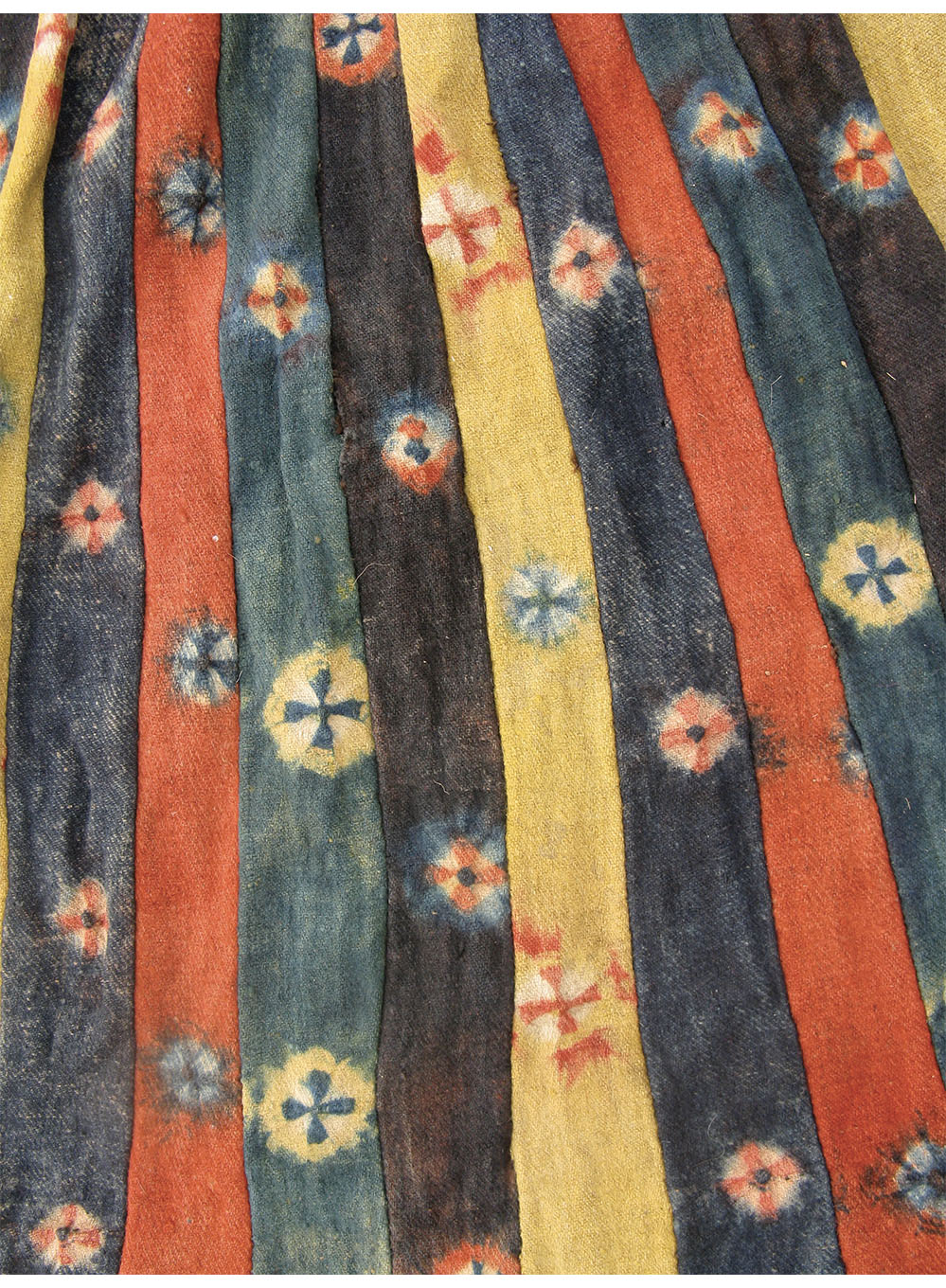 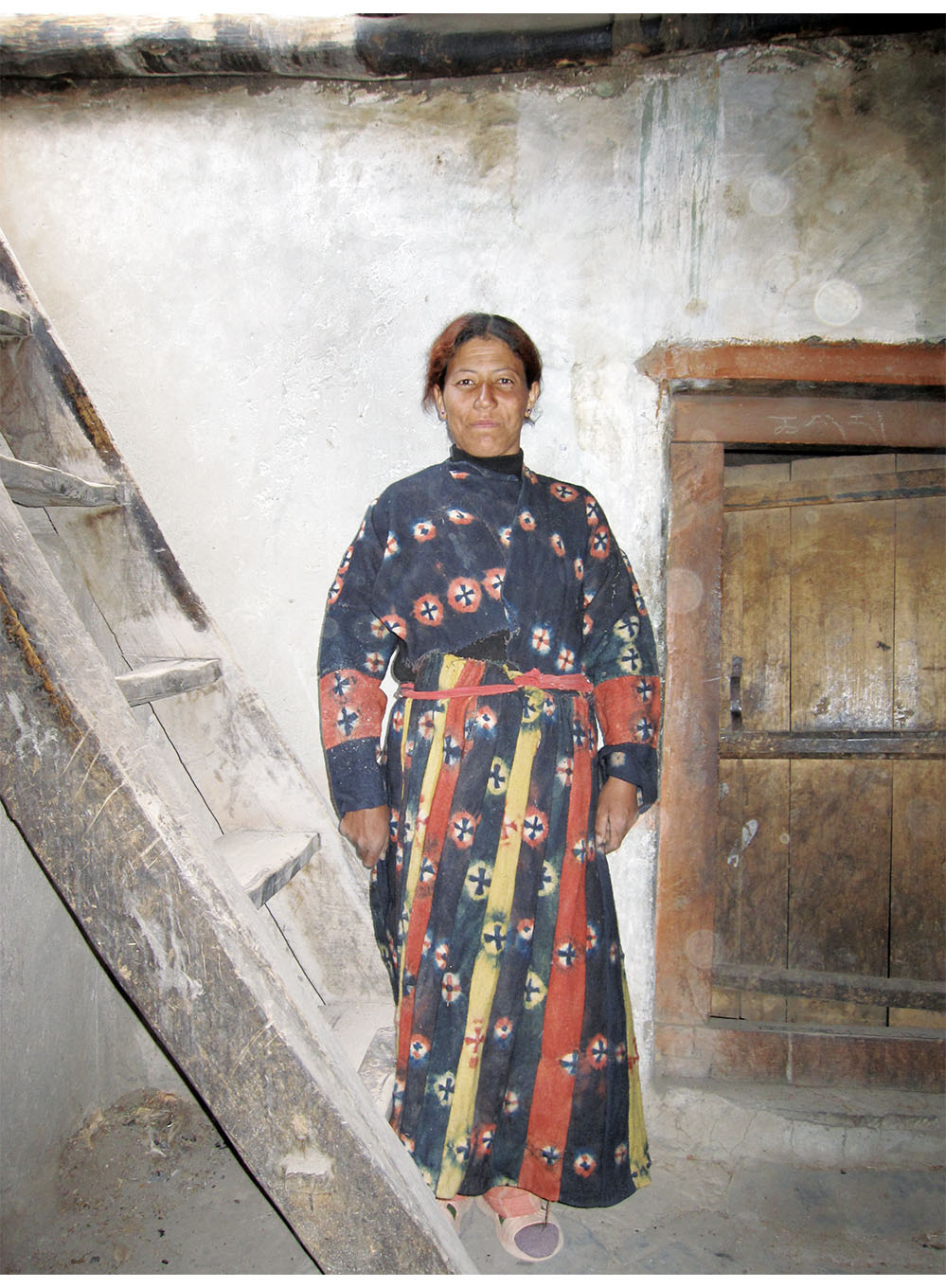 An unusually old and fine tukgonchas, assembled from seventy strips of snambu. Sham area, central Ladakh pre1910. Sparing use of tigma concentrated on the lower skirt. Clear yellow contrasts with a predominance of cool colours.