A carpet for Pavlosk Palace

This autumn, carpets and tapestries of note featured in Christie’s New York sales. On Tuesday 29 October 2019, lot 1009, a Russian pile carpet in ‘The Exceptional Sale’ at Rockefeller Plaza, sold for $87,500. The commission of this carpet and how it entered Empress Maria Feodorovna’s (1759-1828) Pavlovsk Palace make for an interesting story. 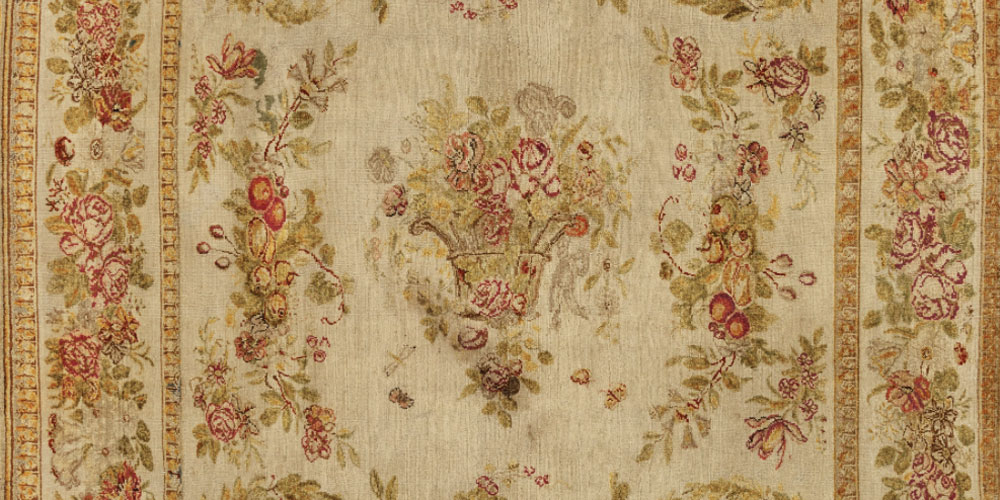 Although it has not been possible to pinpoint the room for which this elegant neo-classical carpet was supplied, the prominent display of Maria Feodorovna’s initial with the Imperial crown, and its relatively small scale, would suggest that it was used in one of her private apartments. Its restrained palette and abundant use of ﬂowers recalls designs for seat covers at Pavlovsk with similar ﬂoral festoons on a cream ground, woven in France circa 1780 and remarkably still surviving (see E. Ducamp ed., Pavlovsk The Collections, Paris, 1993, pp. 124-6). 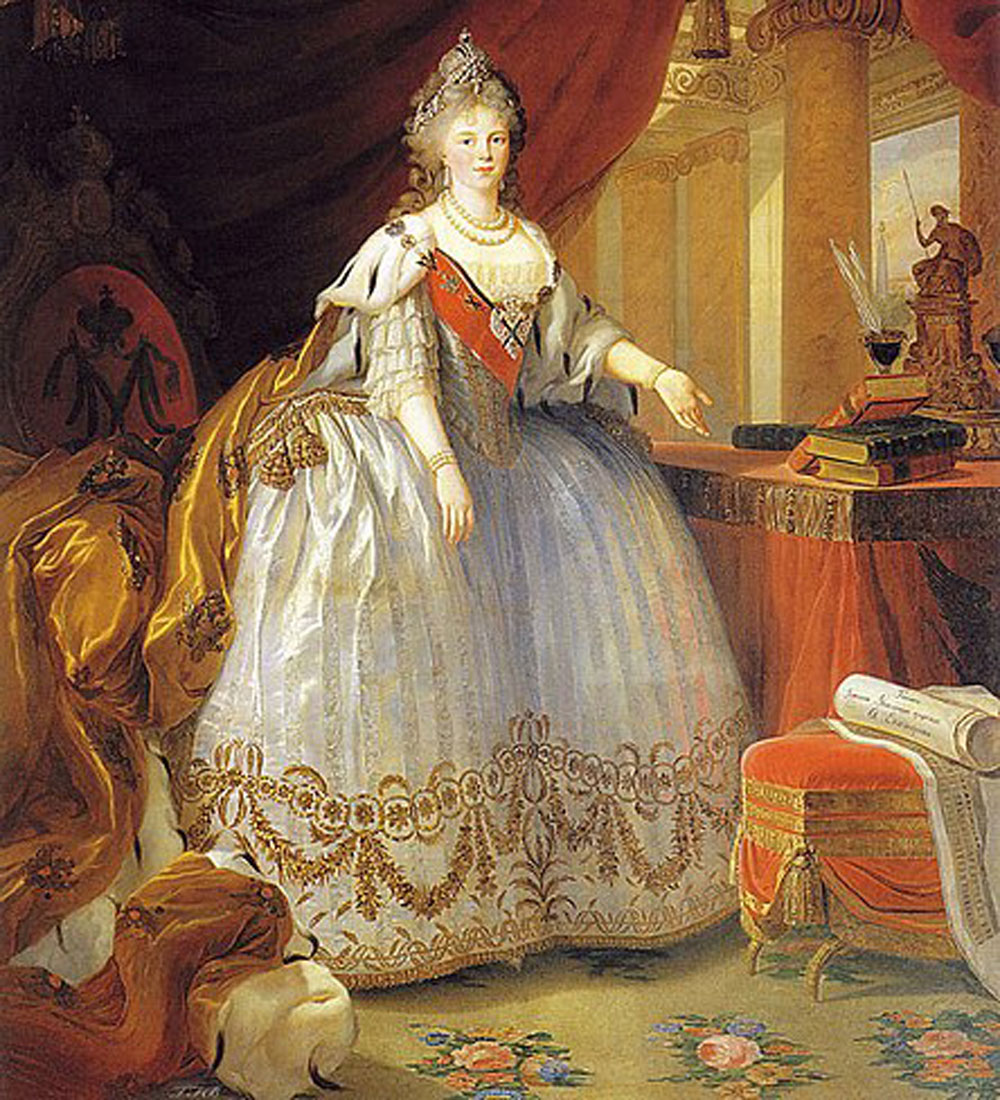 Indeed, in a beautiful portrait of Maria Feodorovna by Elisabeth Vigée le Brun (detail above), she is shown standing on a carpet of similar ﬂoral design, accompanied by a chair proudly displaying her initial ‘M’ and a crown, as on the present carpet. 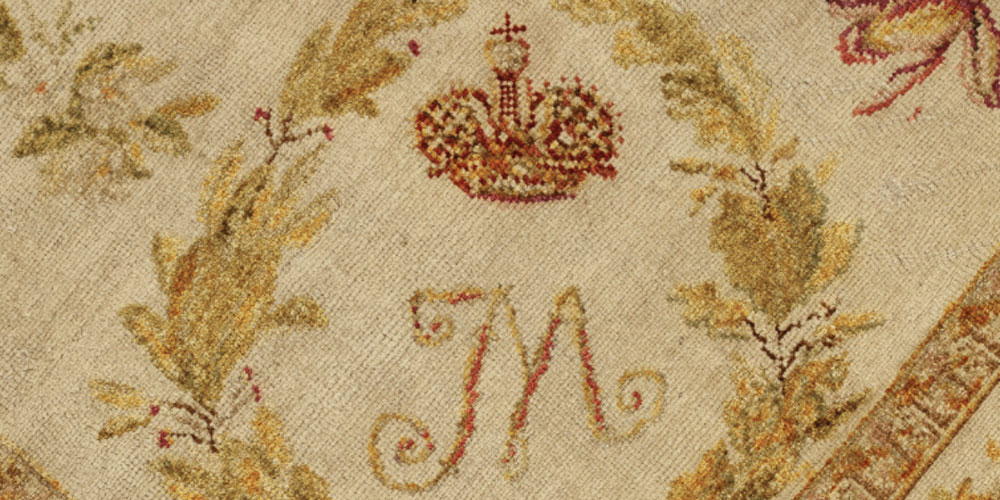 The woven Cyrillic inscription on the carpet gives a tantalising clue to the original commission of this carpet. It transcribes as ‘Fabr. Pavlovskii Gr: Kushelevo (or Kusheleva?)’; the ﬁrst part translates as ‘made for [or in] Pavlovsk’. ‘Gr.’ could stand for either ‘Grod’ (city) or Graf (Count). ‘Kushelevo’ (or ‘Kusheleva’) could refer to Count Grigorii Grigorievich Kushelev (1754-1833), Admiral of the Fleet and an important statesman under Paul I. His wife Countess Liubov Ilinichna Kusheleva, (1783-1809) became a lady-in-waiting to the Empress following Paul’s coronation in 1797, and in 1799 inherited the vast estates of her uncle Prince Alexander Andreyevich Bezborodko (1747-1799), making her one of the wealthiest heiresses in Russia. Could this carpet therefore have been commissioned by either Count Kushelev or Countess Kusheleva as a present for the Empress? 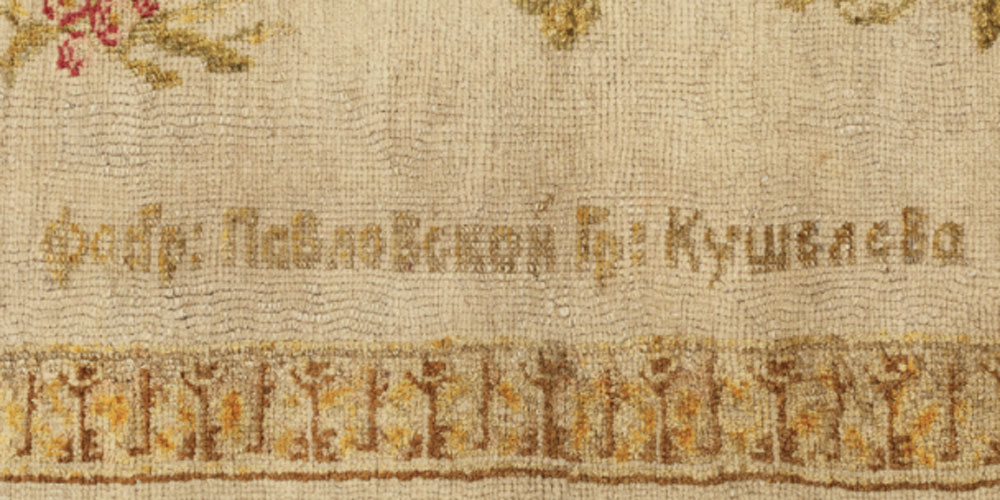