Thread of Time: A Tapestry Portrait of Napoleon The Bayeux Tapestry

In the early years of the 19th century, Napoleon Bonaparte sought to emulate his hero, William the Conqueror, by recreating the scenes of the Bayeux Tapestry through an invasion of Britain. As Ben Evans explains in HALI 204, circumstances changed, but the result was still a commission for the historic Gobelins Manufactory.

On 23 February 1804 Napoleon Bonaparte instructed the director of Palais du Louvre—recently renamed the Musée Napoléon in his honour—to return the Bayeux Tapestry to the citizens of Bayeux. It was to be on loan for a thousand years. This was just under three months before the establishment of the First Empire, and nine months before Bonaparte’s coronation as emperor.

In 1803 Napoleon had visited his troops in Boulogne as they readied themselves for invasion. Referring to the Tapestry, he told his army that the textile recorded one of the greatest moments in French history. He ordered that the Tapestry should be brought to Paris later that year to be displayed to the public. 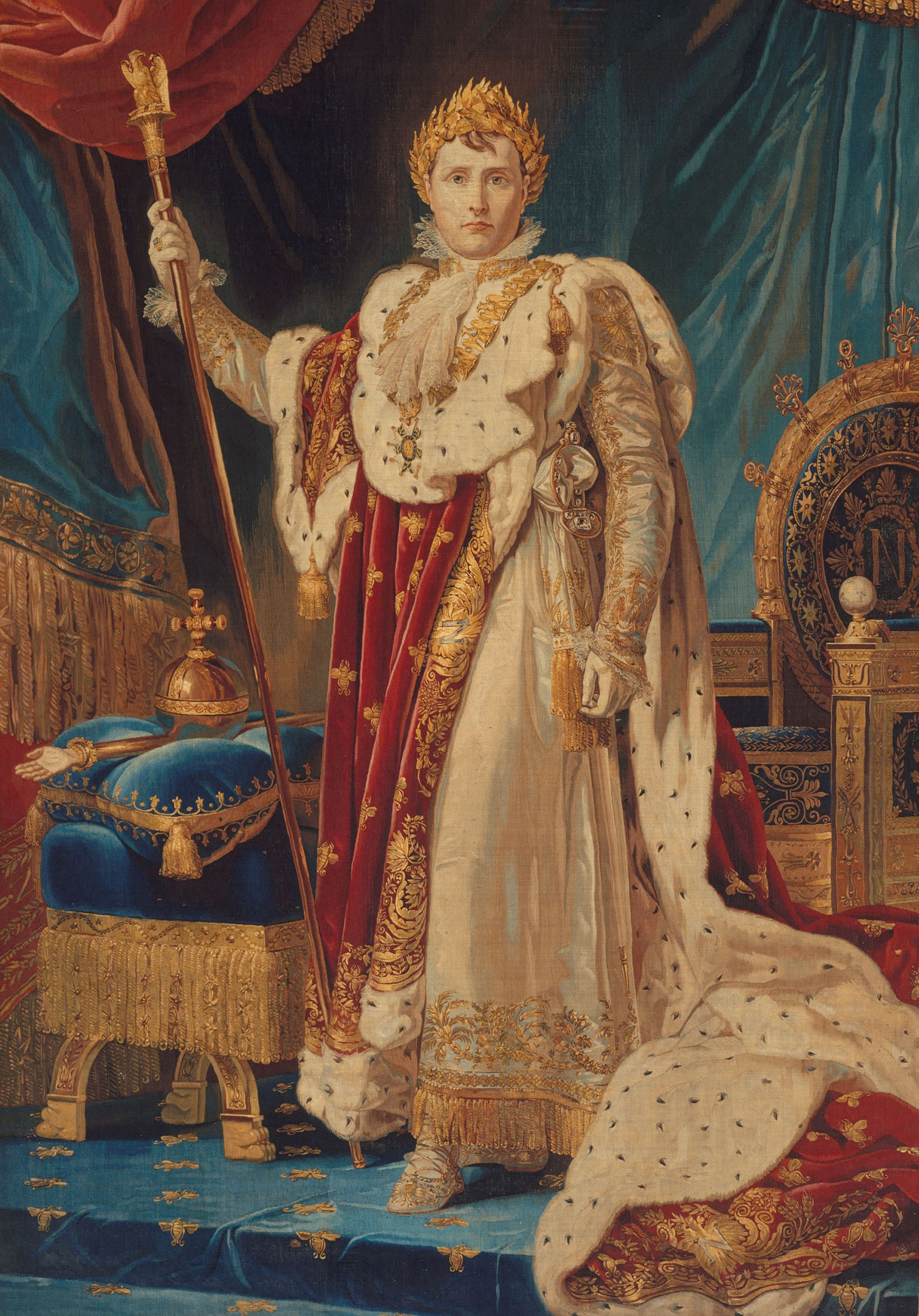 It would have seemed apt to Napoleon that it should be on show in the capital. Not only did he project himself as the reincarnation of William the Conqueror, but he also wanted to bolster support for his plan to invade and defeat England with an armada. Napoleon’s ambition sought to emulate the success of William I, whose invasion and victory over Harold and the English is told in the ‘Tapestry’ (which of course is an embroidery).

Before the interest shown by Napoleon, the Tapestry was subjected to years of neglect. Indeed, in 1792 during the French Revolution, it was almost repurposed as covering for horse carts. Thanks to a new realisation of its considerable propaganda potential, and the consequent display in Paris, the historic textile was restored to a position of prominence.

At the time a cult of admiration had grown up around William’s wife, Queen Matilda; it was a commonly held belief that she had been integral to the embroidery’s creation. This even led to the performance of a play, La tapisserie de la Reine Matilde, in Paris in 1804. The implicit comparison to Joséphine de Beauharnais would have done no harm to the couple’s imperial ambitions. 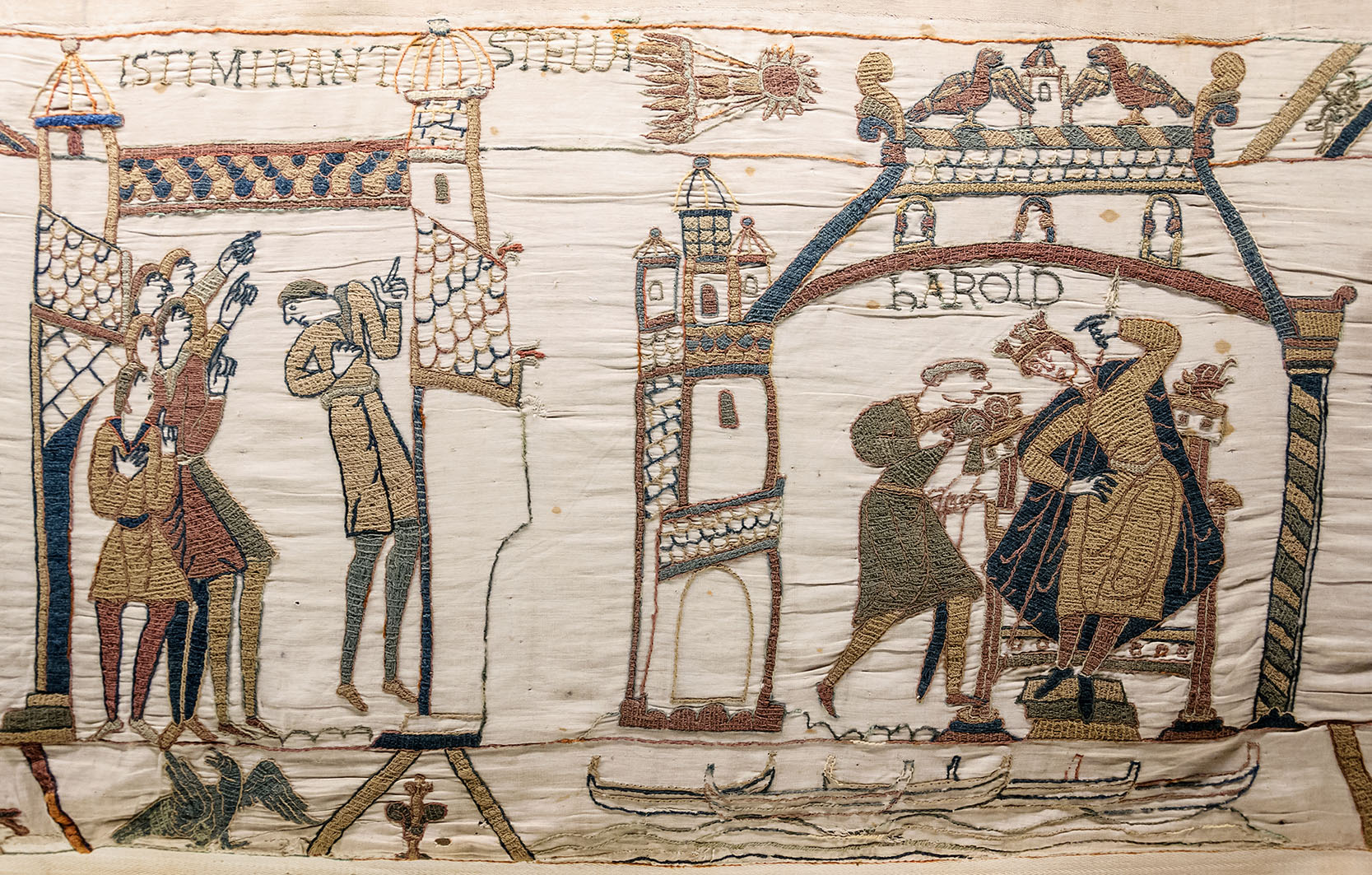 In the Tapestry there is a depiction of Halley’s Comet (detail above), which was seen in the skies of northern France and England in March or April 1066. As revealed to Harold it is considered to be a bad omen; thus an image of the impending invasion fleet is implied by the empty boats in the border below his throne.

Napoleon’s army had been based in and around the Channel ports since 1798. But now, concerned with how to get his troops over the Channel, he understood that, like William, he needed to undertake an extensive boat-building scheme. This was a slow and expensive process and the public display of the Tapestry would help to raise interest and money for the scheme; the sale of the French territory of Louisiana to the United States also contributed to the invasion and boat building plans.

The comet and associated omen impressed Napoleon; however, its implication could work both ways, as a comet was reported to have appeared in northern France in early December 1803, causing some consternation among troops and the general public.

As it turned out, in 1804 the invasion plans were overtaken by other events, such as the persistent blockade of ports by the British navy, the invasion of Austria, and of course Napoleon’s crowning as emperor on 2 December.

With his place in history more than secured by his coronation, the emperor’s royal ambitions were best realised by the commissioning of this tapestry taken from his favourite portrait, painted in 1805 for the Ministry of Foreign Affairs by François Gérard. The textile version was designed the same year and woven in 1808-11, by the Manufacture Nationale des Gobelins under the directorship of Michel Henri Cozette. Through commissioning this venerable institution, Napoleon aligned himself with the type of status and royal patronage from the past whose legacy surrounded him in the palaces of Paris. While he may not have repeated the success of William the Conqueror in invading England, he restored interest and pride in the Bayeux Tapestry and commemorated himself in one of the finest tapestries made in the Gobelins workshop.