As seen in HALI 200, here we reveal an exemplary Ainu ceremonial garment from Hokkaido, with appliqué and embroidery on elm-bark fibre cloth, which, having featured in Textiles of Japan by Thomas Murray and Virginia Soenksen, is now in the collection of the Minneapolis Institute of Art 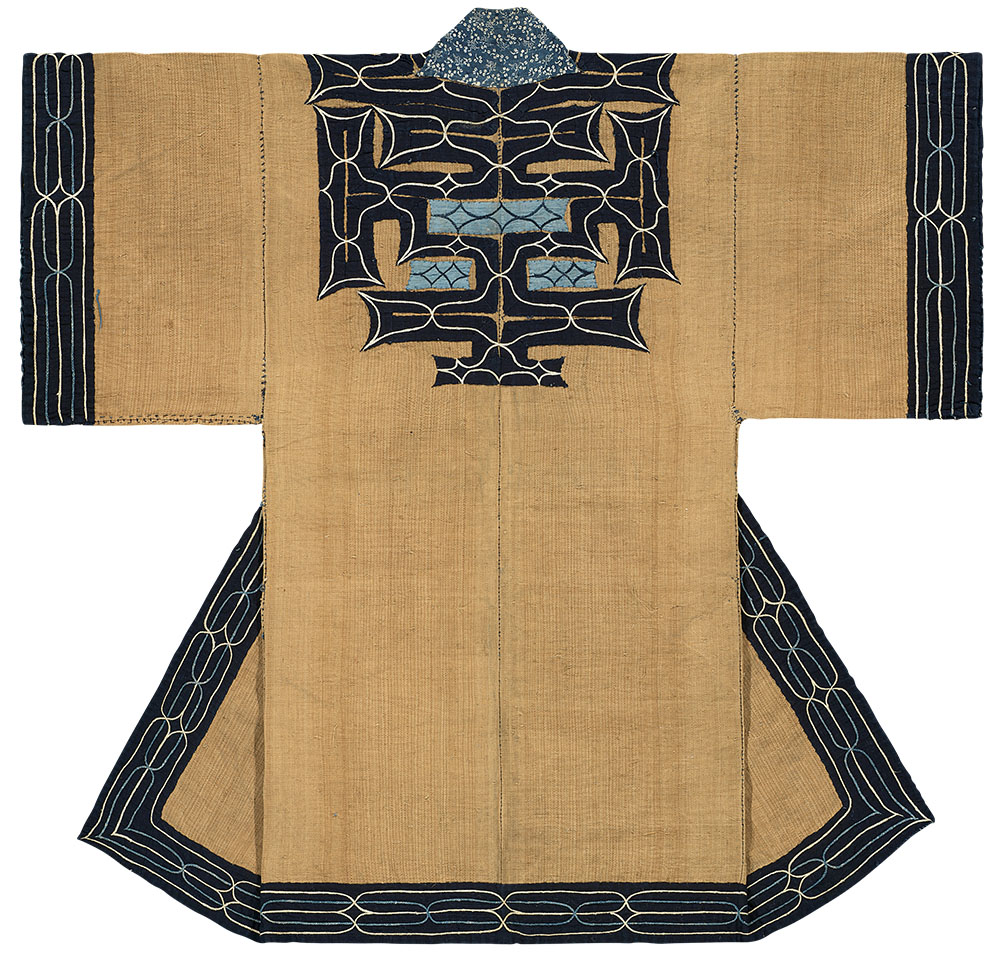 The Ainu are a Paleo-Mongoloid people native to Hokkaido, the most northerly main island of the Japanese archipelago, as well as to the Russo-Siberian island of Sakhalin. They were the original population of Japan who were pushed north by the arrival from Korea of the people from whom the vast majority of today’s Japanese population is descended.

The Ainu share affinities with the Nanai and Nivkh minorities in Siberia, as well as across the Arctic via the Aleutian Islands. Their art is rooted in the patterns found on tools and ritual objects of the Old Bering Sea culture of circa 300 CE.

Living close to nature, the Ainu survived through hunting, fishing and some limited agriculture. The distinctive natural materials they used for textiles include elm-bark fibre, white nettle fibre, sealskin, and even salmon skin. In the 19th century, they began to obtain greater quantities of cotton and silk through trade.

Attush robes are made from bast fibre, known as ohyo, derived from the elm tree, and are one of the most distinctive Ainu textile variants. The cloth was made by harvesting the inner bark of living trees before the spring growth, soaking it, and then splitting the fibres into threads and weaving them by hand into a dense, warm, yellow-brown cloth.

After weaving the fabric and sewing it into a garment, it was decorated with embroidery and appliqué, using cotton cloth and thread. The ornamentation was an essential characteristic of Ainu dress and a visual expression of their religious beliefs.

Simple attush garments were made for daily use, but more elaborately decorated robes such as this example were intended for ceremonial purposes. They were rarely worn and highly valued.

This attush robe was made by an Ainu woman in Hokkaido in the 19th century, and is in exceptional condition. The woven ohyo ground cloth shows subtle vertical stripes created by weaving with dyed (light brown) and undyed fibres, and the colour of the blue cotton appliqué is particularly vivid. The square rather than tapered sleeves are unusual, reflecting Japanese dress influence. The garment demonstrates the great artistry possible in both the woven fabrics and their decoration. 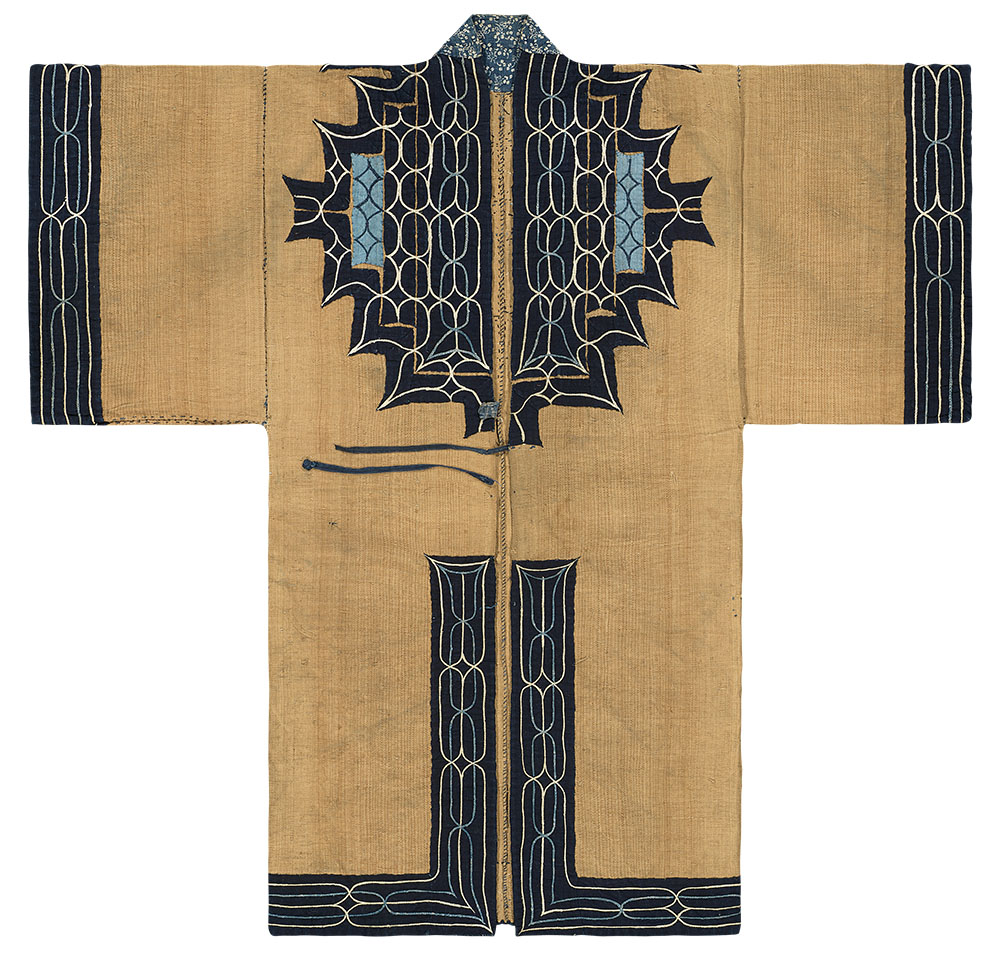 Like many attush intended to be worn for important ceremonies, this robe is decorated with appliqué and embroidery using imported cotton trade cloth and thread. The appliqué is concentrated on the upper back, at the edges of the sleeves and hem, and on either side of the collar. Most of the appliqué is dyed a dark blue with indigo, but there are small segments on the upper back and upper collar that feature a bright, sky-blue shade of indigo that provides a pleasing graphic contrast 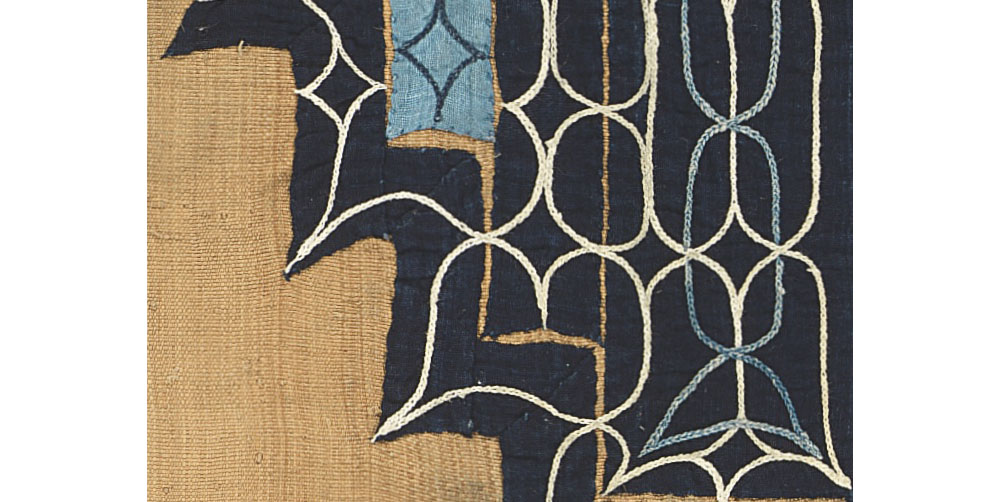 Embroidery featuring stylised thorn patterns and bracket-shaped motifs was applied to the collar, upper back, hemline, and cuffs of the robe to guard the wearer from harmful spirits seeking to enter his or her body through the openings. The freehand embroidery is entirely in chain stitch (oho) and is remarkably precise and symmetrical. The artistry of the maker can be clearly seen in her use of dyed and undyed threads to create multi-dimensional patterns 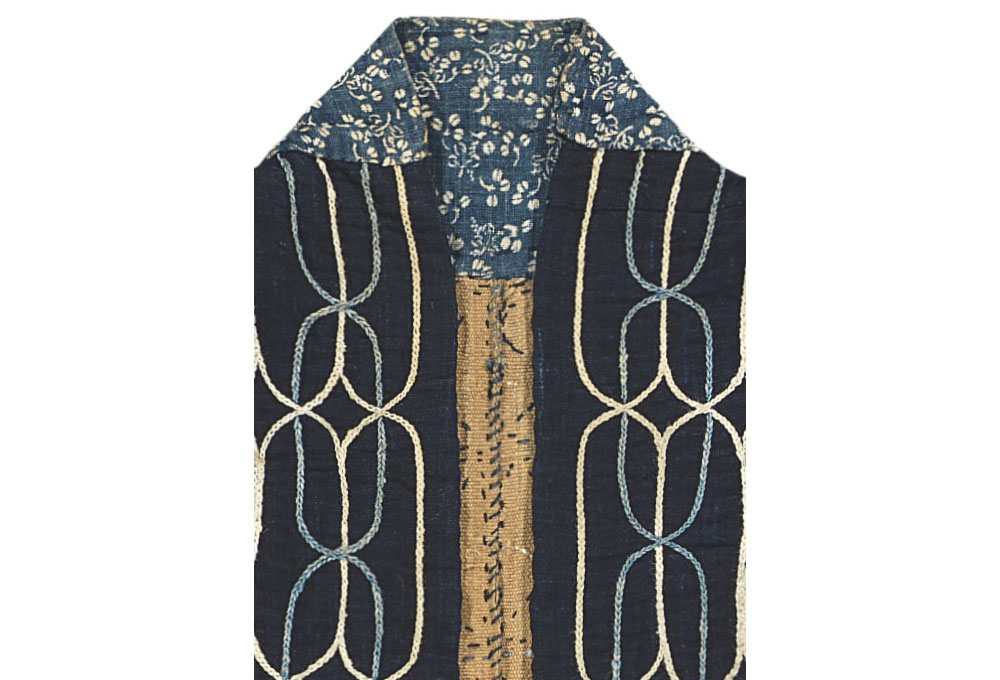 The very top of the collar is made of indigo-dyed Japanese cotton fabric patterned with a small floral design achieved by means of katazome (stencil resist dyeing). In Hokkaido the Ainu were able to trade fish and animal skins for cotton from the Japanese. It was these trade cloths that offered new possibilities for creative expression in Ainu costume