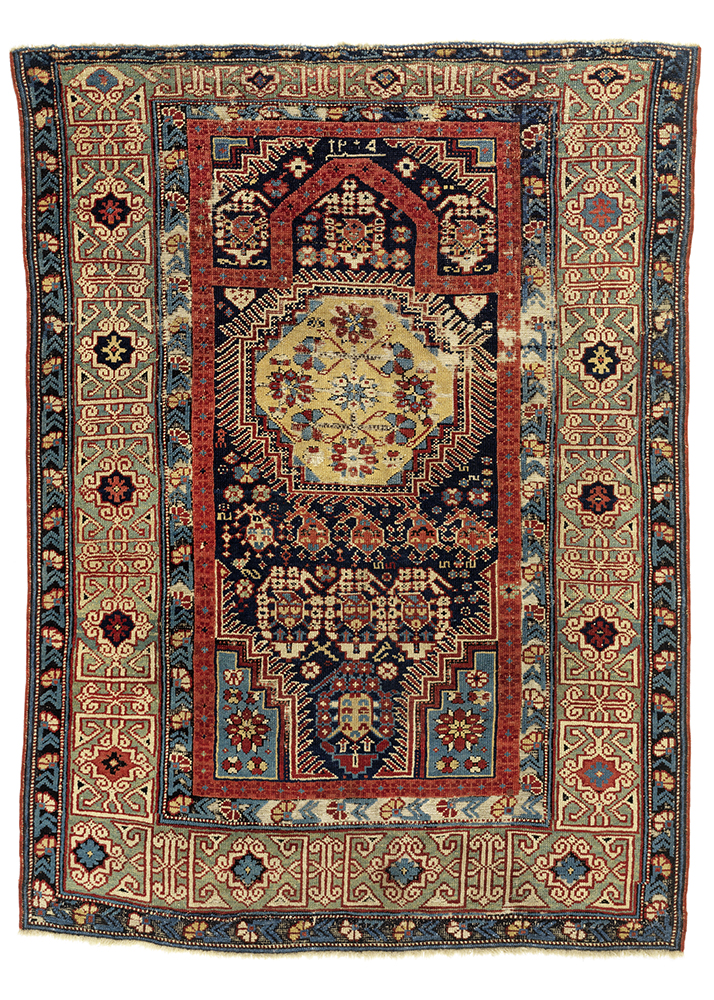 The inwoven date of this rug is subject to several different interpretations. It appears to read 1205 AH (1790 CE), but this seems implausibly early, while the most obvious alternative, 1305 (1887 CE) is perhaps a little late. Its owners feel that it could have been made prior to the export boom, around the middle of the 19th century: the black wool is heavily corroded, there are deviations of symmetry in the colour scheme of the Kufic border, and a great variety in the liberally spread secondary motifs, particularly below the central medallion, as well as in the colour and form of the various botehs.

The published example most similar in composition is plate 89 in Rudolf Neugebauer and Julius Orendi’s Handbuch der orientalischen Teppichkunde (Leipzig, 1909). Another rug with a similar boteh and medallion arrangement, and the only one with a red ground, was advertised in HALI 57, 1991, p.156 by Woven Treasures (Parviz Yathrebi) in Philadelphia. The most recent addition to the published group is plate 130 in Abel Trybiarz’s Rugs & Art: Tribal Bird Rugs & Others: A Buenos Aires Collection (London, 2017).

Johannes and Christine Kinzl’s rug is, to date, a unique prayer format example from the Baku district in Azerbaijan. Its red ground and Kufic border are rare. In all other respects, such as its rayed stepped medallion and the design of its botehs and spandrels, it is typical of the genre.

Read more of Ralph Kaffel’s ‘Anatomy of an object’ article in HALI 195. 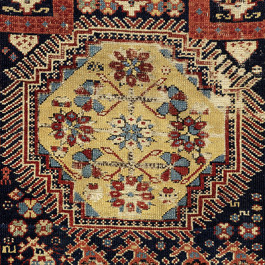 Anatomy of an object

Learn more about the design elements of this Boteh Khila prayer rug. 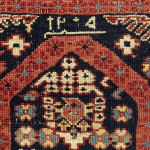 The date inscription apparently reads 1205 AH (1794 CE) which seems too early, but could also be read as 1305 (1887). The innermost floral border surrounding the field, here on a red ground, seamlessly frames the niche. Similar floral borders are seen with Kufic borders on Konagkend rugs. 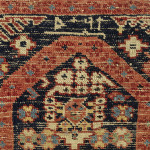 The back shows the slight warp depression, all-wool foundation and two wefts associated with such rugs. In this example there is no cotton in the foundation as is found in the larger workshop rugs of the region, which perhaps indicates that this rug was made at home and not in a workshop. 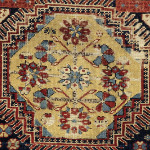 The single yellow-ground rayed stepped medallion beneath the mihrab contains a well-balanced group of eight petalled floral rosettes, with intermediate six-petalled carnations that echo those seen in the minor borders as well as in the spandrels in the lower part of the field. 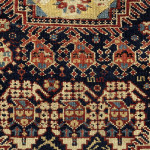 Among the variety of scattered filler motifs that decorate this rug, there are seven conventional major and five unusual minor boteh figures. In addition to the mixed array seen here, three more white-ground major botehs appear above, one within and one either side of the mihrab, with a final blue-ground rendering of the motif held between the lower spandrels. 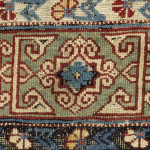 The Kufic main border appears in this form on many east Caucasian rugs of the 19th century, but has been found on just four rugs of the Boteh Khila group. The carnation design meander minor borders, with heavily corroded black dyes, show Turkish influence.