From the Pasha to Pennsylvania

A large-medallion Ushak from the early 1500s has travelled between the Near East, Europe and America over the centuries. In HALI 205, Autumn 2020, Ted Mast places this exceptional carpet in context and uncovers its history. 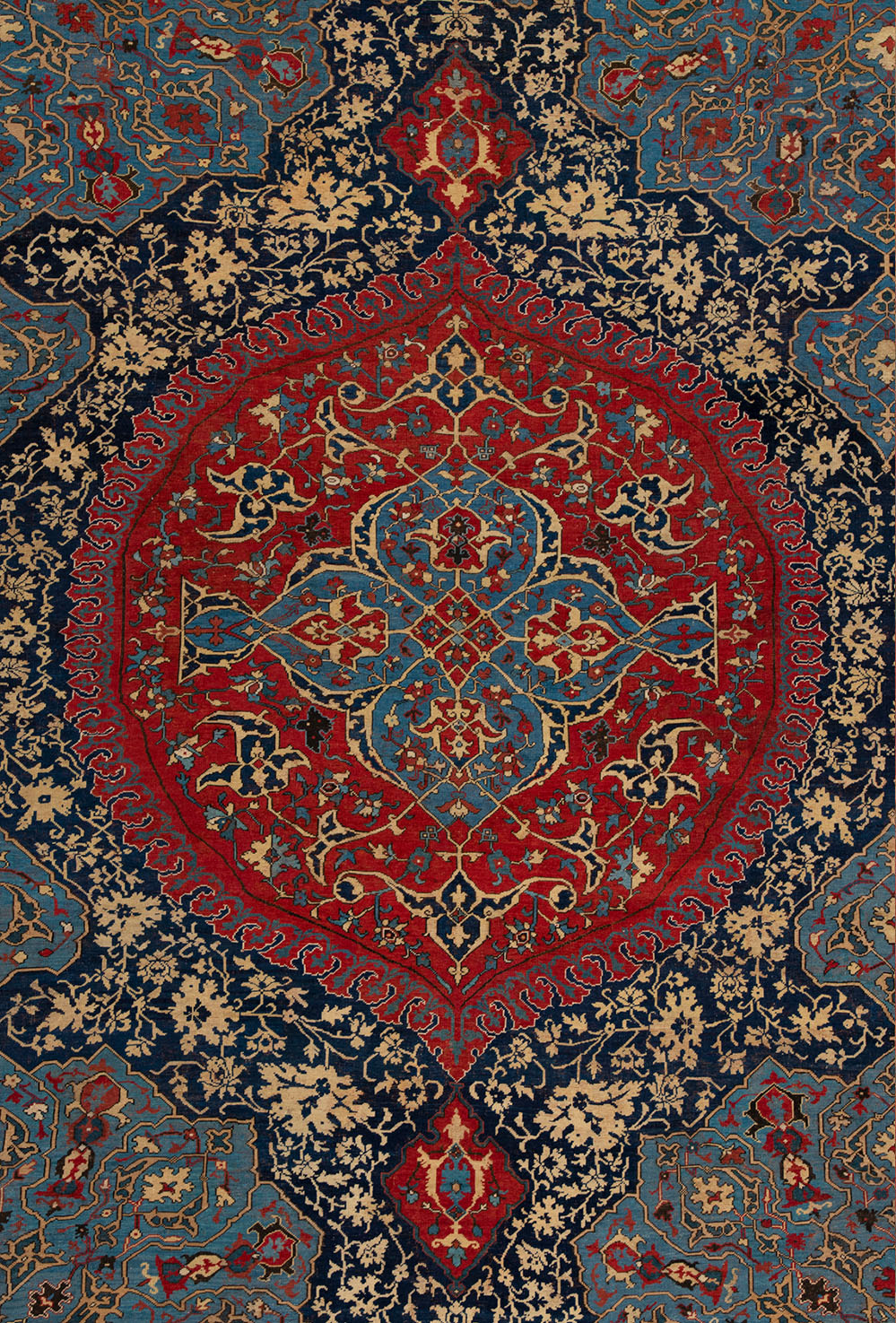 Carpets currently called large-medallion Ushaks are unique—their basic design has been woven almost continuously for over five centuries. Probably the most identifiable of all rugs and carpets, they were originally produced in and around Uşak, a large town in western Anatolia known for its extensive rug production since the dawn of the Ottoman Empire. Their popularity proved to be widespread and enduring. The genre includes a well-known category of 19th-century Bijars, faithful to the original large medallion design.

The earliest ‘first phase’ examples, now dated circa 1450–1525, are considered to be the purest and most desirable. They can be distinguished by their careful draughtsmanship, with graceful arabesques and minimal distortion. The colour palette is limited but effective, with either red or blue fields, typically with a lattice of vinery and leaves over the field.

The design has been around for so long that it is considered traditional, but when it first appeared it represented a radical departure from the aesthetics of the era. A closely related precursor is found in the Baba Nakkas pattern book used in the court studios of Mehmed II (r. 1444–46, then 1451–81), but versions had been used earlier in leather bookbinding, metalwork and other media. The essential elements consist of a central medallion with semi-foliate pendants at either end. A few early examples have ovoid medallions, a seeming carry-over from bookbinding design, but there are equally old examples with round medallions; the preponderance of the latter suggests this was the preferred version.

Fractional medallions (usually less than half) project on an axis from beneath the upper and lower borders. Flanking this arrangement in the corners along the side borders are four halved ‘secondary’ medallions and pendants of a different design. The medallion/pendant ends facing the upper and lower borders are often abbreviated or lack the pendant completely, in order to make the design elements fit together. Sometimes the secondary medallion bodies are more than half complete, which makes the pendants free-standing, away from the borders. Arrangement of the design elements common to large-medallion Ushaks indicates that the compositions are formulaic by nature, laid out to accommodate the intended dimensions and the length/width ratio. This opens up the probability that many of the earliest carpets were bespoke or otherwise produced with specific places in mind, and as such precluded export-orientated mass production.

When casual viewers are shown pictures of a representative group (HALI 116, pp. 106–15 will suffi ce), their probable initial reaction is that the carpets all look alike. Once the nuances are pointed out, individual preferences will be determined by how the whole and partial medallions are arranged, and whether the negative space between is open enough to let the composition ‘breathe’ while containing the lattice of vinery and leaves without crowding.

Ushaks of any age short of new were in high demand throughout America’s ‘Gilded Age’ between the late 19th century and the mid-1920s. Dealers and auction houses in the US clamoured to supply the well-housed gentry in the eastern states from Boston to Miami. The Turkish émigré carpet dealer Vitall ‘the Pasha’ Benguiat (1859–1937) partnered with the Art Sales Corporation, a subsidiary of the American Art Association and precursor to Sotheby’s. The Association funded his scouring of Europe and the Near East to find important carpets and textiles to be sold at auction, and provided him a studio above its New York salesroom. But his extravagant lifestyle and a waning market took their toll, and by 1927 he owed the AAA a half million dollars. Cortlandt Field Bishop, co-owner of the AAA, demanded payment via immediate liquidation. After postponements, the first and most important liquidation sale was held on 23 April 1932, followed by another in 1935. Prices were fractions of what they had been ten years earlier, and it was said that losing his prized collection irreparably broke the Pasha’s spirit. He was rarely seen in the trade thereafter.

The Great Depression notwithstanding, tastes had changed. The proportions of large-medallion Ushaks were now seen as awkward, their designs were considered grandiose, and they were soon regarded as curios or relics, not as components of modern interiors. Nor was there much collector interest. During the second half of the 20th century, arguably a high point of rug studies and collecting, they were shunned to the point of wilful ignorance. It hardly mattered whether they were early or late, they were all seen as export-orientated, formulaic and devoid of personal expression. What’s more, for most collectors they were too large to display or store; typically heavily worn, damaged and dirty, they were not thought worth restoring.

The carpet as it appeared in the 1932 Benguiat sale, unchanged when exhibited in 2006

Yet there were always a few cognoscenti who understood and appreciated classic Ushaks, serene in the knowledge that they remained in the world’s most prestigious museums for good reasons. The owner of the carpet seen here, who wishes to remain anonymous, is a life-long artist and rug enthusiast, largely self-taught. When it was offered to him in the early 1980s he saw past the damage and dirt, and leapt at the chance to buy it, with no illusions. It was not the sort of piece that would have been selected for rug society exhibitions, and it was not ‘exhibition ready’ in any conventional sense. Still, it was a masterpiece—impeccably drafted and coloured, superior to any chosen comparison. That includes to the closely related Joseph Lees Williams half-carpet in the Philadelphia Museum of Art, of which Charles Grant Ellis noted, ‘It is better to own half such a carpet than none at all.’

Compared with others of its age, the present carpet was in remarkably good condition, missing little more than its outer guard borders and with a few crudely repaired holes. It would have responded well to competent restoration, the cost of which had continued to rise over the years, and it remained unrenovated. Nevertheless it was exhibited in 2006 at the Arthur Ross Gallery, University of Pennsylvania (HALI 145, p. 109). At the time, a few dedicated rug scholars and enthusiasts might have recognised it as Lot 27 in the catalogue of the 1932 Benguiat liquidation sale, where it appeared exactly as it did in 2006. As far as is presently known, it had not been offered in previous AAA sales, which suggests it might have been among the Pasha’s favourites.

A few years ago, the present owner yielded stewardship and entrusted it to Antique Textile Conservation (ATC) in Izmir, Turkey, for a comprehensive cleaning and restoration operation. It took over two years to complete and exceeded all expectations. The Ushak did not now look like a new carpet, but rather a 500-year-old carpet in near-mint condition. By coincidence, shortly after completion the owner was contacted by Michael Franses, who was conducting research in the Bardini Museum, Florence; he had discovered a photograph of this very carpet when it was evidently in the possession of the museum’s founder. Stefano Bardini (1836–1922) was an internationally known art dealer, painter and restorer whose focus was the Renaissance. He was known to have restored or repaired an array of objects, from paintings and furniture to architecture, including the deconsecrated church that is now the Bardini Museum.

Notably, in the photograph the carpet is unrepaired, making it likely that Bardini tried his hand at carpet repair and realised it was more difficult than he had imagined. Further research might tell when ownership passed to Benguiat, possibly in Bardini’s de facto ‘going out of business’ sale of 1918 in New York. Bardini and Benguiat would have been astounded by ATC’s uncanny abilities, and would surely have agreed that this restoration is a good thing for art history—to have a significant piece now museum-ready. Fortuitously Michael Franses and Alberto Boralevi have been researching this carpet, in preparation, it is rumoured, for a forthcoming exhibition at the Bardini in 2022. If so the event will undoubtedly include this carpet, now looking as it probably did when Copernicus proposed that the earth revolves around the sun.