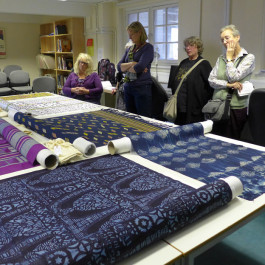 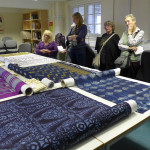 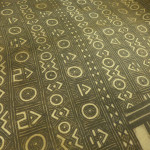 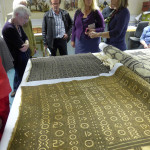 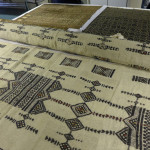 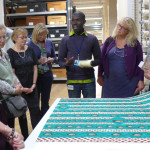 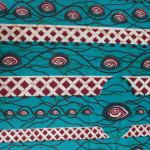 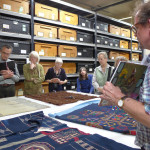 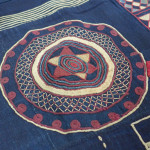 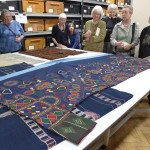 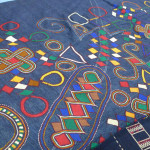 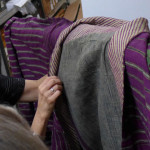 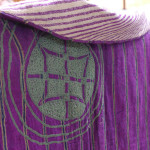 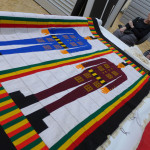 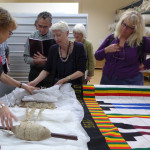 unfurls a loom from storage 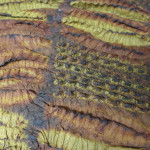 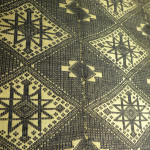 The Textile Society Collector’s Group met on 19 April at the British Museum store at Blythe House in West London to view a varied selection of West African textiles from the collection. Guiding the visit were Helen Wolfe, Textile Collections Manager for the British Museum; Chris Spring, Curator of African Galleries and author of African Textiles Today; and Gideon Agyare from Ghana who is working with the museum while studying for an MA.

The visit allowed a close look at some spectacular examples of African textile craftsmanship, many of which appear in Chris Spring’s book. This led to an exchange of ideas and theories initiated by well-informed members of the group in response to Chris’ explanations that covered a wide range of topics, from manufacturing techniques to the global cultural significance of the items viewed. The items were displayed in country groups, from Ghana, Nigeria, Mali, Ivory Coast and Sierra Leone. Most groups contained examples of strip-woven articles.

The presentation began with a fine silk Kente cloth of the kind that has come to symbolise African textiles and that inspired British textile design in the 1950s. Woven by the Asante of Ghana, the silk used for these cloths would have originally been unravelled from imported trade cloths, as was also the case with a late 19th century Nigerian strip woven aso oke cloth on show. The particular shade of ‘Perkins’ purple (see HALI 175, p. 30 Thread of Time) used in this Yoruba cloth was at the height of fashion in Victorian England shortly after the aniline dye’s invention, so it fits that there would be an abundance of waste silk of this colour for recycling in Africa. The object entered the museum collection in 1900, the woven green motifs are symbolic of a Qur’an board. Modern examples of aso oke strips containing lurex and cross-over threads have recently been acquired from West African markets for the museum collection in order to keep a record of their rapidly changing fashions.

Gideon explained the meaning of a vibrant resist dyed cloth from Ghana. Covered in eyes, the message communicated by the wearer was that not all issues are suitable topics to be discussed in public. It has been known for a first wife to gift a garment with this patternation to his second wife. As well as aesthetic and fashion led considerations, it became clear that the cultural undertones and encrypted messages symbolised within a cloth’s design are of great importance. Allowing the wearer to relay silent messages within the community, (although the meanings of these vary from place to place and change with time). 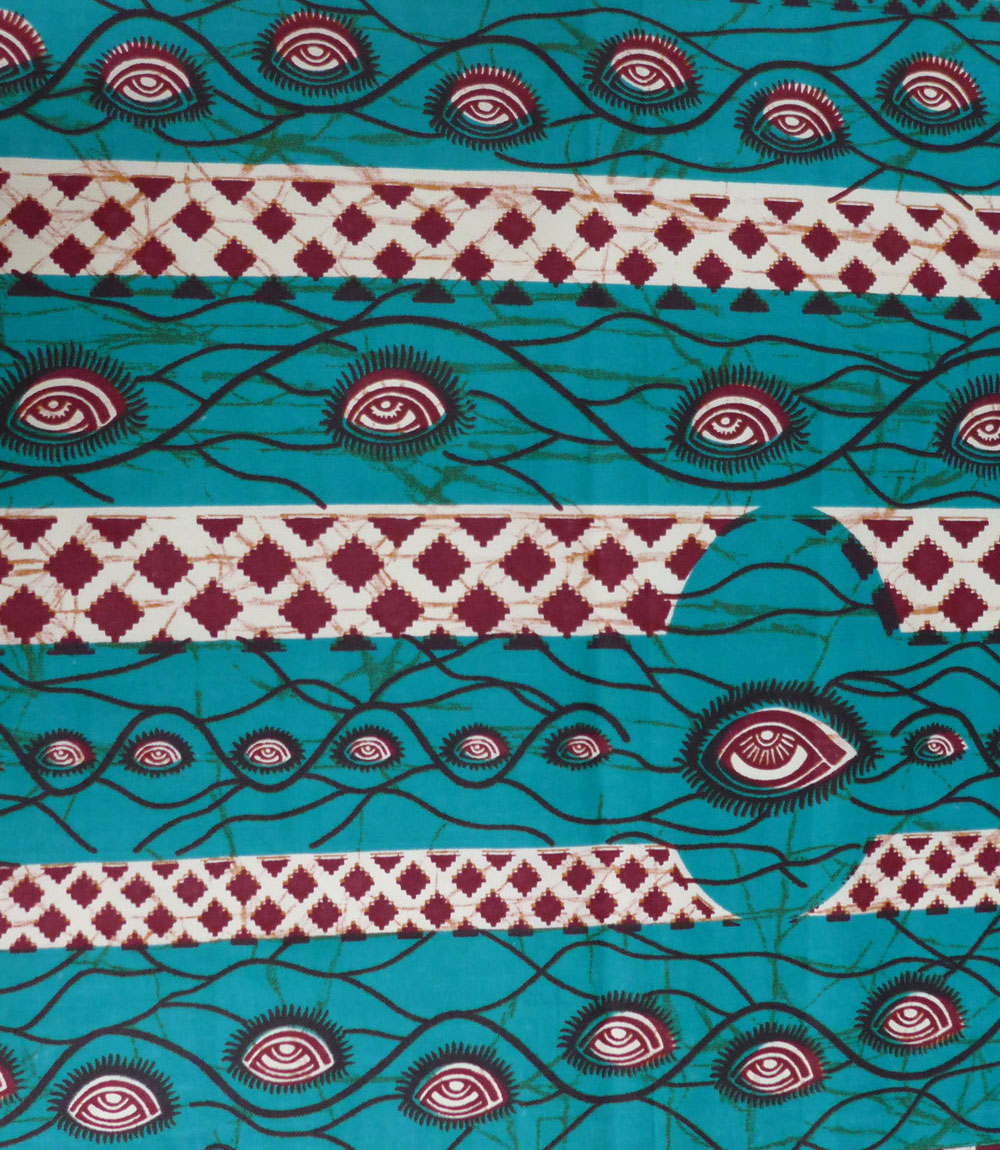 Next to be focussed on was an Igbo cloth from southeast Nigeria with colourful striped rhomboids suggestive of falling leaves. It was followed by a white ground adinkra cloth from Ghana, stamped using a calabash with a pigment from the badie tree. These prints become very unstable and powdery with age. The woven and printed symbols each have an encrypted meaning; one section on the Adinkra shows a two headed crocodile, linked in the middle to advocate the avoidance of greed; that it is better that everybody eat, feeding the communal belly of a civilisation than to be selfish.

Two examples of Nigerian adire cottons were shown, both indigo dyed but with very different results- one being achieved with stitch resist and tie-dyeing, the other with a figurative stencil of an Alake (king) achieved using eleko starch paste to commemorate the installation of the new monarch, Abeokuta in 1963. This memento echoes the British trade cloths exported to West Africa to commemorate the coronation of King George VI in the 1930s (see HALI 179, p. 33 Thread of Time).

A wonderful Hausa costume from Nigeria invited close inspection; a purple gown constructed from numerous narrow strips of imported silk, again had green decoration like the earlier Yoruba fabric in coarser, local silk. The lexicon of the symbols offer protection from the evil eye and, while still ornate, are more subdued than those stitched in onto the voluminous riding breeches that would have been concealed beneath the robe. These were sometimes covered with comical, raunchy and phallic, multi-coloured motifs- an expression of secret fun and private jokes, hidden away from public view.

On a Mende gown from Sierra Leone numerous gris gris (charms) in the form of leather parcels offered protection to the hunter or soldier it clothed. The belief in these talismans powers being the most effective guard, rather than the parcels contents themselves.

From Mali were a woven Fulbe wool piece from the Niger Bend- one of the few areas of sub Saharan Africa where sheep can survive. The designs show a Fulbe interpretation of Berber patterns that symbolise a mosque. Also two examples of mud discharge dyed cloths of intricate patterning on densely woven cotton that were acquired in the 1950s. More Berber influence was evident in an elaborately patterned narrow strip cloth from Guinea Bissau; it’s manufacture is likely to have required the assistance of several ‘draw boys’ to operate a complex, multi-heddle loom. A fine raffia Dida tubular skirt with patterning reminiscent of reptile skin would have been an Ivory Coast heirloom signifying the wearers’ noble decent.

Also from Mali, a woven cotton wall hanging by Oumar Bocoum dated 1996 was shown, which presents a woman’s choices between a loving marriage or monetary gain by selling herself to a group of soldiers. To end the gathering, the group were shown a loom, unwrapped from its storage space in the British Museum archives.