The Qaraqalpaq Dialectic: Qaraqalpaqs of the Aral Delta: The Right to Reply

In HALI 175 (Spring 2013, pp.124-127), Andrew Hale reviewed David and Sue Richardson’s ‘encyclopaedic’ new book, Qaraqalpaqs of the Aral Delta. The full version of his review was published on this site.  Here the Richardsons address what they consider to be serious flaws in the reviewer’s assessment. An abridged version of this detailed rebuttal appears in HALI 176 (Summer 2013, p.37). 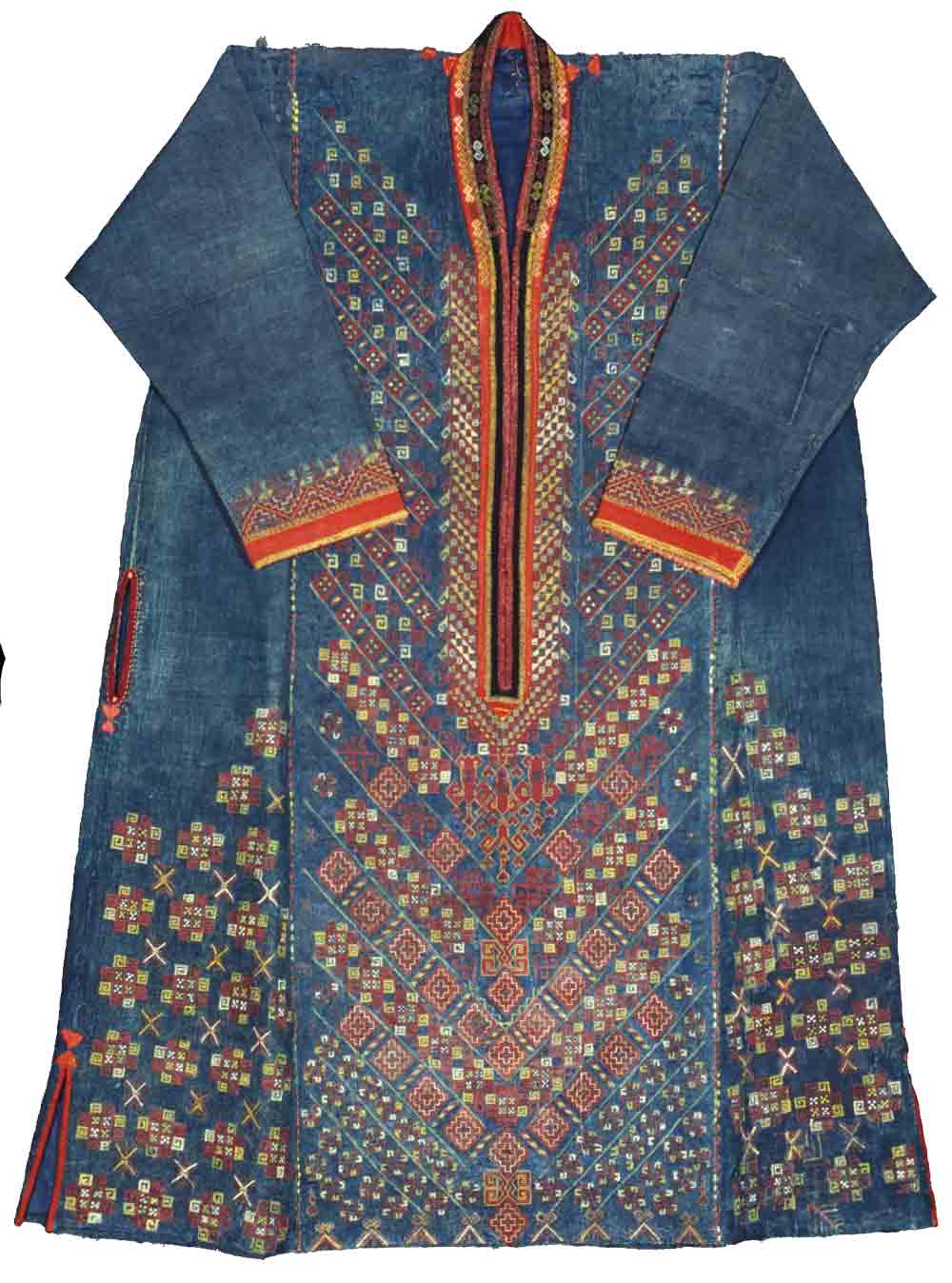 As we read Andy Hale’s review of our book, Qaraqalpaqs of the Aral Delta, we were reminded of an old friend who would amusingly quip “Don’t tell me the facts, I’ve already made up my mind!” It is packed with misunderstandings and errors throughout.

He thinks our book is undermined by our ‘selective reliance on early travel accounts’. Since the Qaraqalpaqs have no written history of their own and genetics and archaeology are of only partial help our main understanding of their past comes from the eyewitness accounts and maps of travellers – mainly envoys and military officers. We want to emphasise that our book is not based on a selection of these accounts, but on all of them. A large part of our research involved tracking down the journal of every traveller who had ever visited the Qaraqalpaq territories. Not surprisingly there is a high level of consistency between them.

Hale completely misrepresents us by asserting that we take the position that ‘until the early 20th century, most Qaraqalpaqs lived on a subsistence basis and did not produce anything of value’. The early Qaraqalpaqs had a rich material culture – visitors in 1740 describe elaborate women’s headdresses. Unfortunately little else was described and no early artefacts survive. A century of attacks by Jungars and Qazaqs, raids by local Turkmen, and the oppressive policies of Khiva drove the majority of Qaraqalpaqs into destitution. Their material culture was seriously eroded and only kept alive by the tribal elite, as evidenced by 19th century survivals such as the saw’kele and ko’k ko’ylek. Every 19th century visitor consistently described the abject poverty of the Aral Qaraqalpaqs, Anna Rossikova writing that she had not seen such misery and poverty across half of Turkestan. These reports are supported by detailed statistics on livestock and land holdings extracted from the Khan’s archives, early Russian economic surveys, and early 20th century photographs. 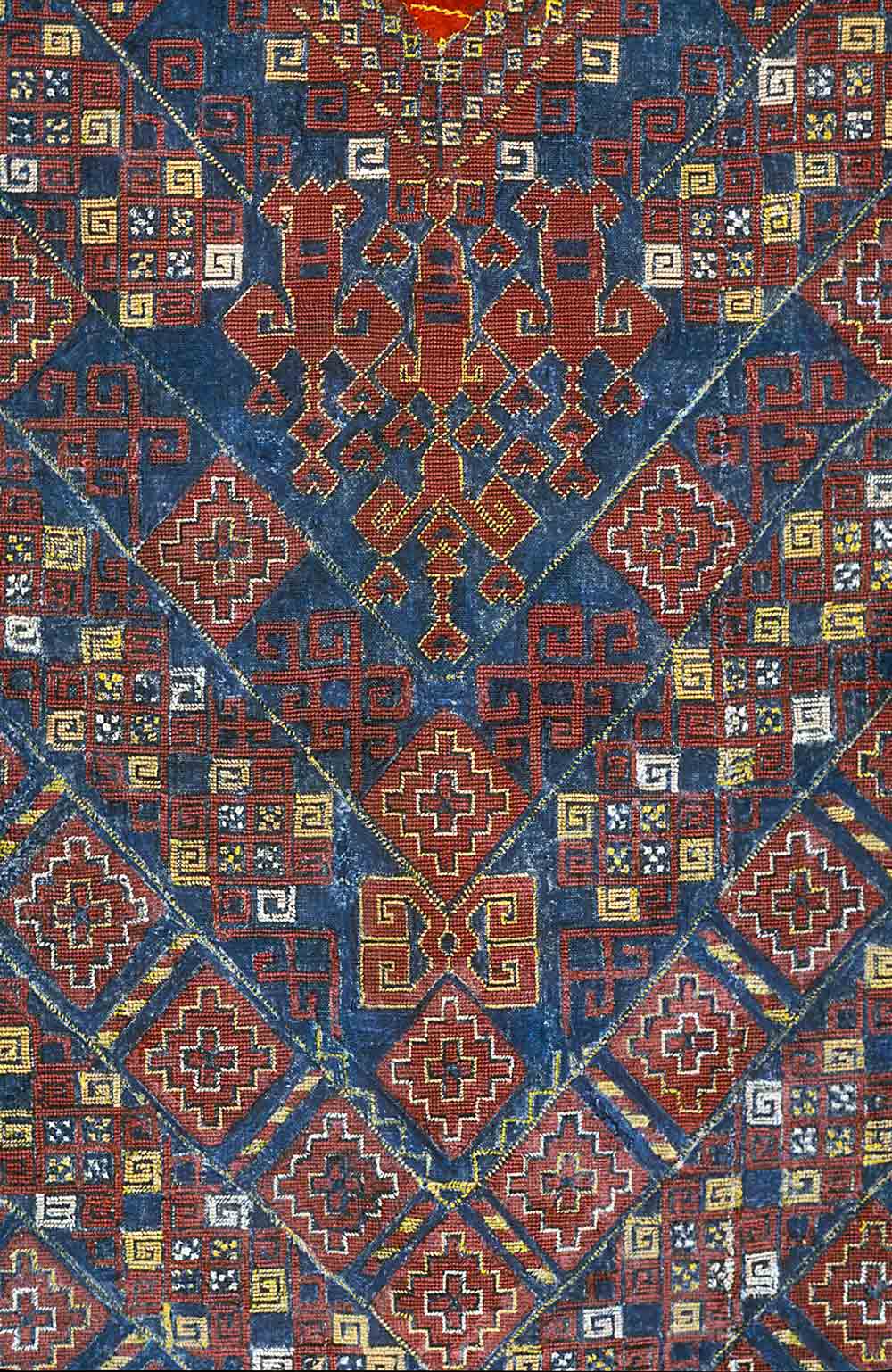 Hale compounds this misunderstanding by exposing his total ignorance of Qaraqalpaq history. He naïvely assumes that the experiences of some Central Asian ethnic groups must equally apply to the Qaraqalpaqs. While collectivization led to mayhem and countless deaths among the nomadic Qazaqs and Turkmen, it was imposed upon the Qaraqalpaqs without major civil unrest. Obviously collectivization was a traumatic event – the landowning elite and clergy were stripped of their property and approximately 2,000 Qaraqalpaqs escaped from the region with their livestock. Overall, however, it was enforced far less disruptively than elsewhere in Central Asia. Why was this? Because the Qaraqalpaqs already lived in communes – collections of extended families called koshe where property was held communally. The creation of state farms involved little more than the linking together of geographically adjacent koshe who generally belonged to the same clan. Interestingly some 7,000 Qazaq nomads chose to resettle in north-east Qaraqalpaqstan in 1933-34 to escape the chaos reigning in their homeland.

Hale writes that the Russians levelled villages suspected of resistance, adding that: ‘The best land was reserved for the hundreds of thousands of settlers who poured in from Russia and Ukraine’. Twenty years after independence from Russia no evidence has ever come to light that the Imperial Russians destroyed any Qaraqalpaq villages. No Ukrainians and just 1,440 Ural Cossacks were re-settled in the Amu Darya Otdel. No Qaraqalpaqs were forced from their farms as a consequence.

Hale criticises our reliance on the reports of Soviet-era ethnographers and historians without realising that we have completely overturned the Soviet version of Qaraqalpaq history. We have however relied extensively on the information gathered by Soviet ethnographers since Qaraqalpaqstan was a closed region for most of the Soviet period. The ONLY detailed information about Qaraqalpaq life and material culture in the 19th and early 20th century comes from interviews conducted from the 1920s onwards with elderly Qaraqalpaqs. The researchers were Anna Morozova and numerous members of the highly respected Khorezm Archaeological and Ethnographical Expedition led by Professor Sergey Tolstov, probably the most comprehensive and professionally documented ethnographical expedition conducted during the entire Soviet era. It is hard to understand why these ethnographers would doctor the facts and photographs that they collected. The various separate reports they prepared are entirely consistent and agree with the responses that we have obtained from interviews with a multitude of elderly Qaraqalpaqs ourselves. More importantly they remain unchallenged by post-independence Qaraqalpaq ethnographers. Textile historians (including Hale himself) frequently fall back on the valuable facts collected by Soviet-era researchers like Antipina, Margulan, Moshkova, Sukhareva and Zhdanko. There seems to be no reason why they should not continue to do so in the future.

Interpretation is a completely different matter. Hale fails to mention that no other textile book apart from our own takes so much trouble to explain the shortcomings of Marxist historiography and ethnography. Yet when we do overturn old soviet interpretations, Hale elects to stick with the status quo. He prefers to retain the old naïve view that the red kiymeshek was worn by young married women and the white kiymeshek by the elderly. The idea that only the elderly wore white is simplistic – white jegdes were highly fashionable among young Qaraqalpaq married women from the 1920s to the 1950s. Hale firstly fails to comprehend that the kiymeshek was primarily a ceremonial wedding cloak worn by women from their wedding day onwards whether white or red. Secondly he cannot accept that the two garments were not contemporary. We have handled many hundreds of these garments and it is glaringly obvious that most white kiymesheks are considerably older than the red kiymesheks that superseded them. Unlike red kiymesheks, virtually all have long ago shed their tails and none have any provenance. Vambery already observed in 1863 that Qaraqalpaq women were wearing a cape like a cloak around the neck – he can only have been referring to the white kiymeshek since the red version was only introduced in the 1880s.

Hale believes that ‘Including more Qaraqalpaq voices would have enriched this book’. During our field research we interviewed several hundreds of Qaraqalpaq families from across the delta – far too many to quote in the pages of our book. Their names appear on page after page and in endnote after endnote, as do their photographs and those of their homes and possessions. Rather than quote individual people we express their views collectively – such as their widely and deeply held shamanistic beliefs and their shallow hold on Islam. Hale strongly objects – for him this is Orientalism, the idea that the Islamic world was backwards and unchanging. We prefer to rely on the evidence of our own eyes rather than western textbooks written by authors unfamiliar with the Qaraqalpaqs. One of the most impressionable aspects of our field research was the depth to which the Qaraqalpaqs still held onto a multitude of superstitious notions – not just rural farm workers but even the urban elite. These traditional beliefs have been extensively documented by modern Qaraqalpaq ethnographers. While there were numerous Qaraqalpaq Islamic centres the majority of the population lived in scattered and isolated awıls. Islam never gained the foothold that it did in Uzbek urban centres like Bukhara, Tashkent and Ferghana. Incidentally we used a picture from a stage play because there is not a single image of Qaraqalpaqs at prayer in the current historical archive.

We find Hale’s labelling of the Qaraqalpaqs as the ‘youngest and weakest brother in the Uzbek family’ offensive. From our experience many Qaraqalpaqs dislike the Uzbeks intensely, some seeing themselves as an oppressed minority, kept under the thumb by the totalitarian Uzbek regime in Tashkent.

Having co-authored a tome on Uzbek ikat we would have expected Hale to be delighted to read about our discovery of a small ikat industry in Khiva. Amazingly he prefers to stick his head in the sand and deny its very existence. Why? Because the American war correspondent MacGahan only saw striped adras and never reported any Khivan Jews. Yet numerous other visitors to the city did, starting in 1822 with Nikolay Muravyov, followed by the former British Jew Joseph Wolff, the German geologist Gregor von Helmersen, the German naturalist Theodor Basiner, the Russian officer Yegor Kileveyn, the Hungarian Orientalist Arminius Vambery, and, in 1880, the English missionary Henry Lansdell. They report that the Jews of Khiva originally came from Bukhara and were involved in dyeing and sericulture. Of course not every Jewish dyer from Bukhara produced ikat, but many did, so we need to keep an open mind. The existence of a Khivan ikat industry was first proposed to us by curators at the Emir’s Summer Palace Museum in Bukhara and was later confirmed by the curator of applied arts at the Ichan Qala Museum in Khiva as well as by knowledgeable Khivan textile dealers like Dilmurat Babajanov, based on information obtained by the sons and daughters of Khivans who previously worked in the local textile industry.

If the Qaraqalpaqs used Bukharan or Ferghana ikat to back their red kiymesheks we would expect to encounter a wide variety of patterns. In fact 85% of all red kiymesheks produced over a period of 50 years incorporate just one single design of ikat – the one with the central turquoise stripe, the most common Khivan design. This same pattern is exclusively used for the pashshayı ko’ylek wedding dress and is by far the most common pattern used for making ikat adras chapans attributed to Khiva. We find loom lengths amongst rolls of alacha in the redundant inventories of former chapan makers, so there is no doubt that the ikat coats were sewn in Khiva. It is because Khiva was the largest coat-producing centre in Central Asia that locally produced ikat was only produced in the form of adras, never shoyi.

We realize that there is much more to find out about this long forgotten Jewish dyeing industry and would love to hear from any readers who may have additional information to share with us.

As a final point Andy Hale describes Qaraqalpaq jewellery as ‘some of the most crudely made in Central Asia’. Jewellery was an essential requirement for a Qaraqalpaq wedding and there was therefore considerable demand for inexpensive jewellery by the paupers and peasants who composed the majority of the population. Fine quality work was only produced for the wealthy minority. Some of this is stunningly beautiful such as the fabulous ha’ykel (illustrated above) that Linda Pastorino revealed to the meeting of the New York Hajji Baba Club in September 2012! 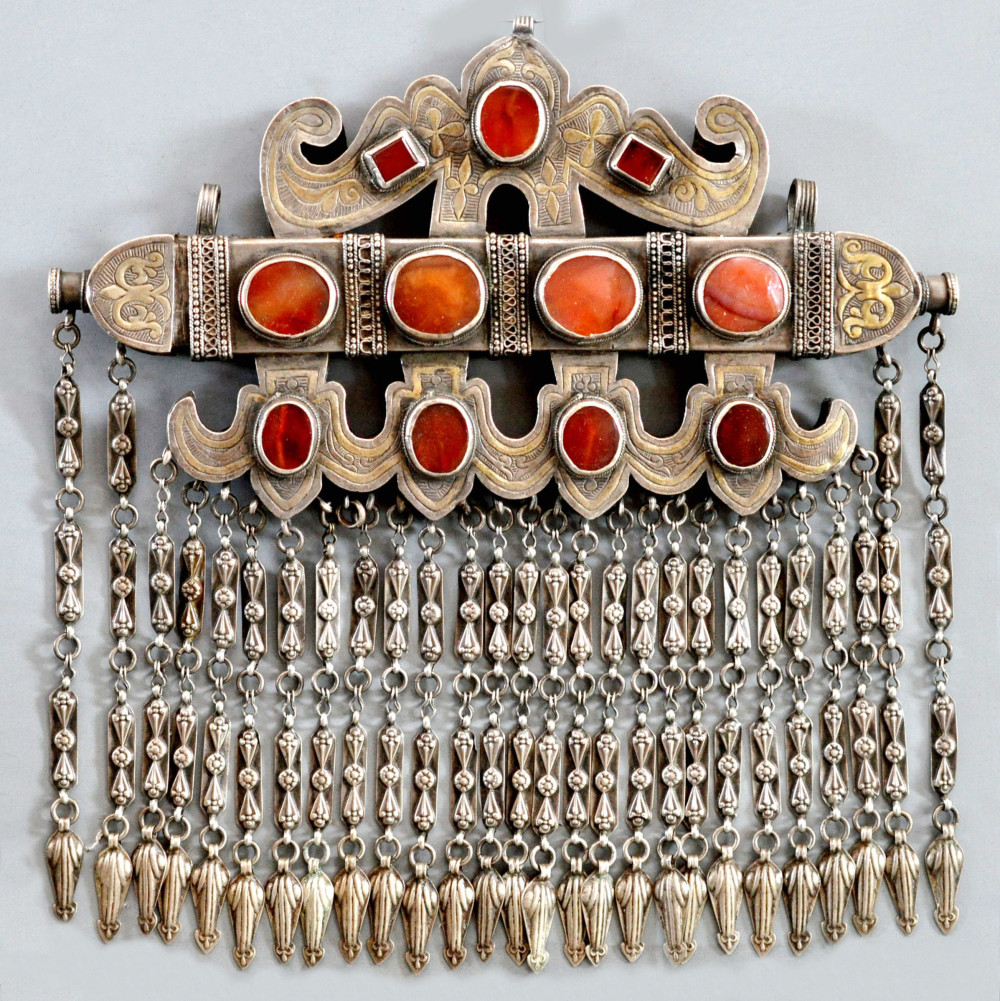