An eye for the tigers

Exclusive rugs designed by contemporary artists take the tiger as inspiration–and, as Stephanie Douglas explains, aim to support the conservation of these awe-inspiring creatures. Read the full article as follows, of which an extract will be coming soon in HALI 199. 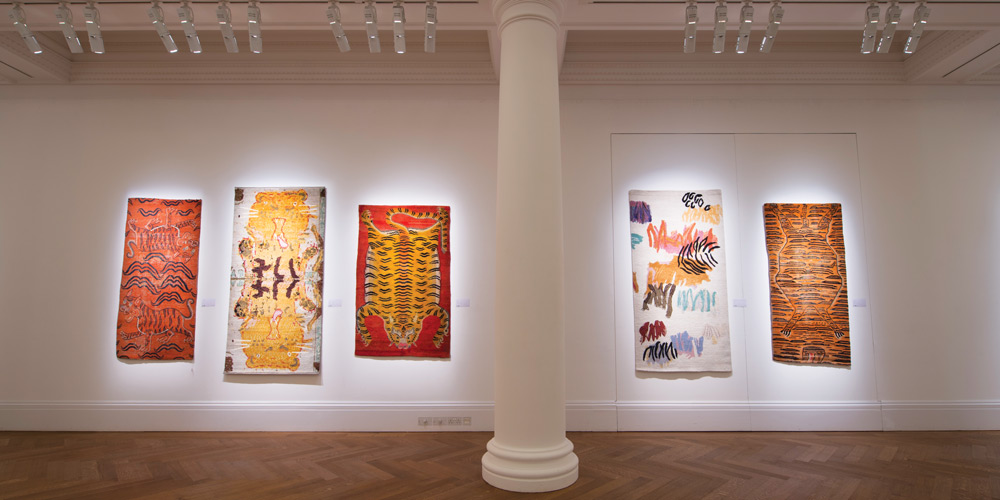 The natural world has been a constant source of inspiration to artists across the world and through the centuries. A recent exhibition was a perfect example of this, in using one of our most majestic wild animals: the tiger. This magnificent and instantly recognisable beast is evocative to different people for different reasons. For many of us, the fascination is initiated in childhood, through fables and other fabulous stories. For those living the remote forest areas of the east, the creature is traditionally attributed with mystical and sacred powers. But very few of us have had the privilege of actually seeing a tiger in its natural habitat. 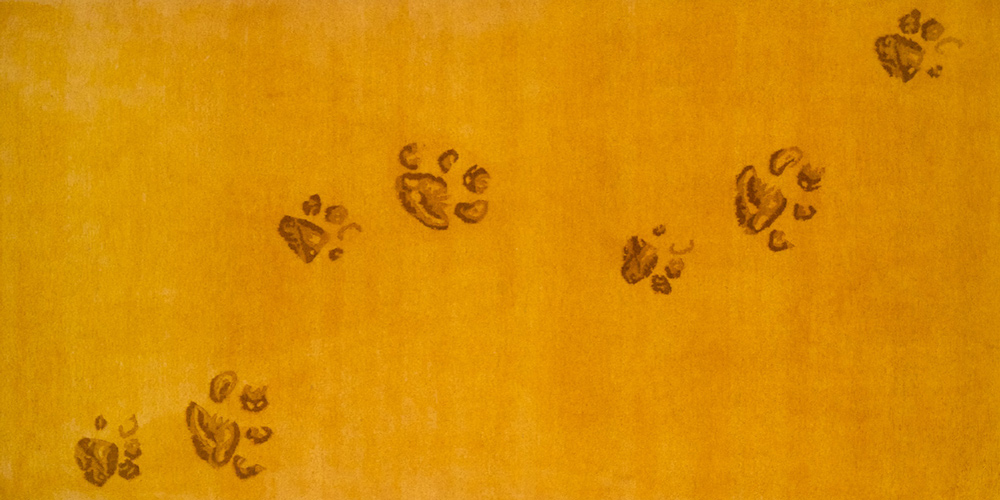 It is estimated that at the beginning of the 20th century around 100,000 wild tigers roamed in a territory that extended from Turkey in the west to Korea in the east. However, despite their revered reputation, in little more than a century the world has lost more than 95 per cent of the wild tiger population, and the animal has become an endangered species on the brink of extinction. The World Wide Fund for Nature (WWF) is at the forefront of a global commitment to double tiger numbers in the wild by 2022, which is the next Chinese year of the tiger. Referred to as ‘TX2’, it is one of the most ambitious and innovative conservation plans set for a single species. 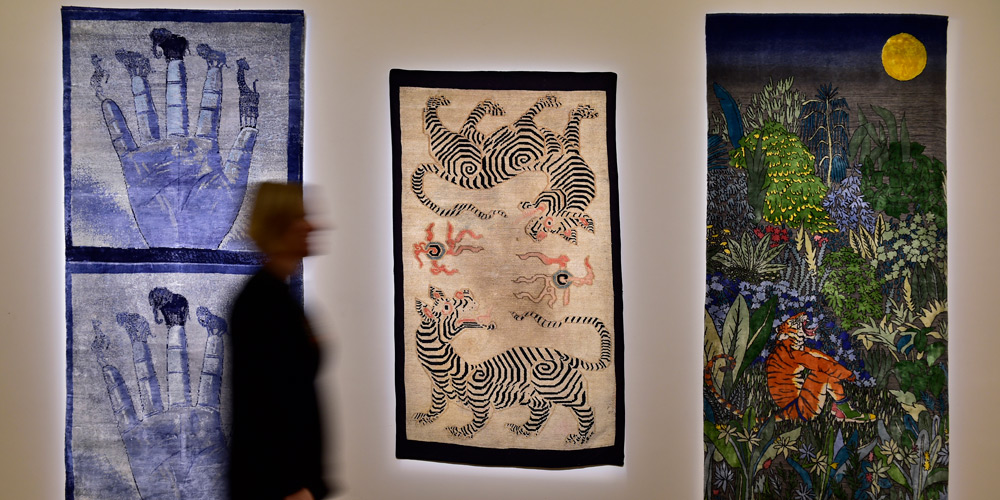 There are positive initiatives and, for the first time in a century, the global number of tigers in the wild has stopped declining, and may even be on the rise. Successes in South Asia and Far East Russia show what can be achieved with a combination of sustained funding and political commitment. In Nepal wild tiger numbers have almost doubled in less than a decade, with the aid of innovative approaches to conservation. However, the long-term survival of tigers ultimately relies on safeguarding their environment, which depends on commitment from all thirteen tiger-range countries: Bangladesh, Bhutan, Cambodia, China, India, Indonesia, Laos, Malaysia, Myanmar, Nepal, Russia, Thailand and Vietnam.

Raising awareness of the issues at stake and acquiring funding for the conservation projects is paramount. By protecting tigers, an ‘umbrella species’, through robust enforcement against poaching and habitat encroachment, we are also protecting vast areas of forest, which benefits many species, including humans. Natural forests are increasingly important to us all, in providing fresh water, clean air and helping to regulate our climate. All these factors emphasise the importance of this global conservation project, and have influenced the designs that we see in the contemporary rugs produced.

To this end, ‘Tomorrow’s Tigers’ is a major new fundraising project that sees the WWF collaborating with Artwise (concept, curation and project management), and Christopher Farr (rug fabrication). The project was devised and curated by Susie Allen and Laura Culpan at Artwise, and features specially commissioned, limited-edition art rugs, designed by ten internationally-renowned artists. The theme was inspired by the small group of evocative tiger rugs coming out of Tibet, and the seminal book and exhibition The Tiger Rugs of Tibet by Mimi Lipton. First seen at the Hayward Gallery, London, in 1988, this show was followed by four years of exhibitions through major European museums. Its success resulted in Mimi Lipton setting up The Tibet Charitable Trust, which contributes to a variety of activities for Tibetan refugees, including working in new and old carpet factories weaving new rugs and copying tiger rug designs. 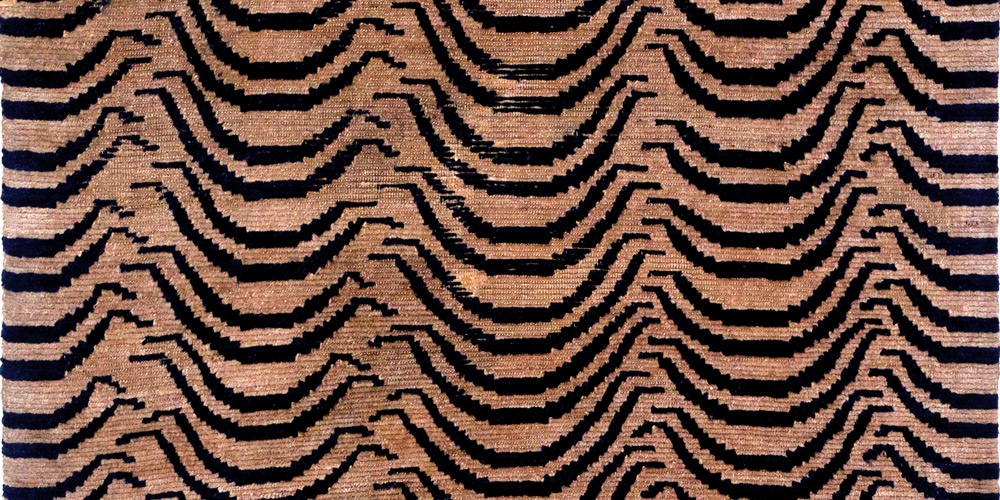 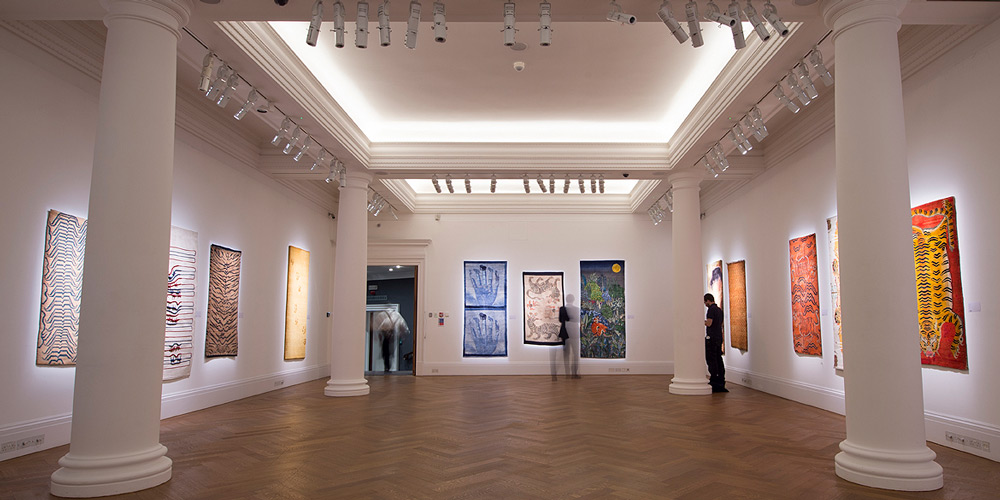 Ten rug designs ranging from representative to abstract, each in an edition of ten (plus one artist’s proof), are made to order, which takes three to six months. All are hand knotted and hand spun, with prices ranging from £10,000 to £25,000. Each has a label on the reverse indicating the edition number, signed and dated by the artist. 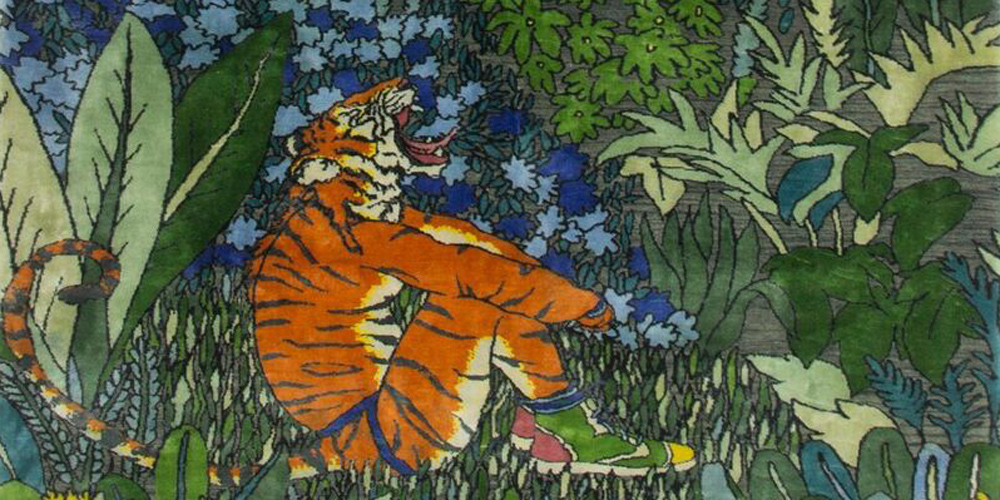 Detail of the rug designed by Raqib Shaw, hand-knotted in hand-spun wool and silk by Christopher Farr for Tomorrow’s Tigers.

Matthew Bourne, director of Christopher Farr, worked closely with the artists and with the craftsmen in Mirzapur in northern India, taking the visions of each artist from design to hand-knotted rug. Just as each tiger has a unique set of stripes, each rug is unique. Incorporating innovative and bespoke weaving techniques with specialist hand dyeing and the finest natural wools and silks, these extraordinary rugs push the boundaries of the art form. There is incredible attention to detail. Techniques include sanding, ironing, burn and wash, variations in levels of relief, high and low knot-counts. There are unusual and sometimes combined materials (wool, silk and wool-covered wire) and an extensive varied range of colours. All have a rectangular format (on average approximately 2.00 x 1.04 m) and are vertical in orientation, apart from the rug Pounce by Kiki Smith, which is a representational tiger in horizontal format. 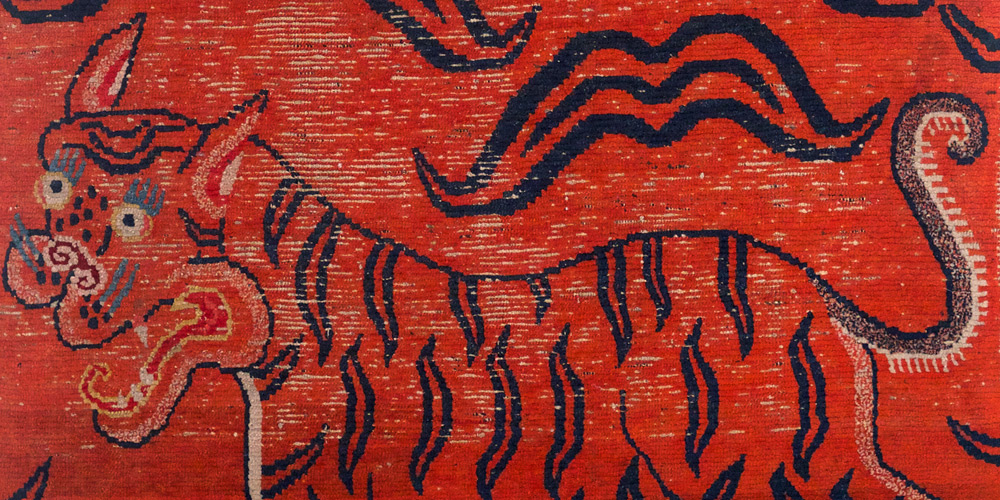 All the wool is sourced directly from local wool markets as fleece, then spun by hand in local facilities. Wherever possible natural dyes are used. When colours not achievable naturally then only top-quality CIBA dyes have been used; these are Azo-free, using a wastewater treatment plant and air filter system for the prevention of emissions during the heating/energy production process. Christopher Farr is an active member of Care & Fair, an organisation based in India that is dedicated to the elimination of child labour in the rug industry and the education of children in weaving areas. 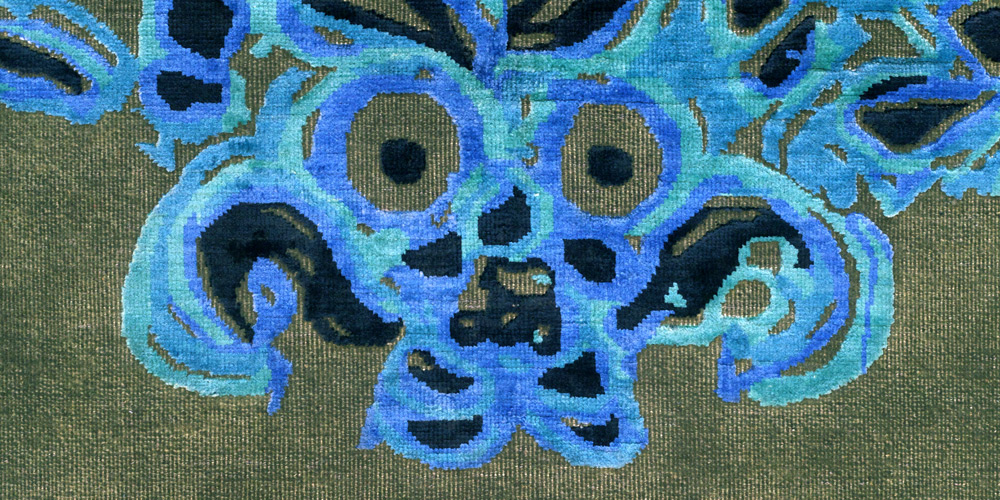 Detail of rug designed by Gary Hume, hand-knotted in hand-spun wool and silk by Christopher Farr for Tomorrow’s Tigers.

Sotheby’s London supported the project and hosted the selling exhibition. In addition to the ten contemporary rugs, the event put on show a small group of nine antique tiger rugs, dating from 1860, 1900 and 1900–50 respectively; these were lent by Nelly Frize, Mimi Lipton, David Sorgato and anonymous private collectors. Five in this group were for sale, ranging in price from £22,000 to £30,000 (some of the proceeds going to TX2), and the designs included a flayed tiger, two double tiger rugs, and two abstract stripe and pelt designs. Their placement next to the contemporary rugs during the exhibition created a positive interaction between the designs of the past and the present. 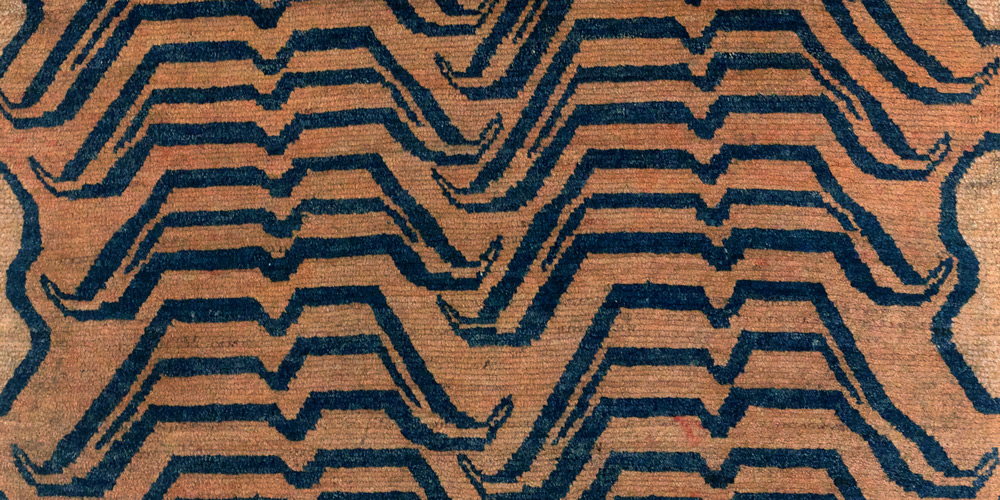 Tibetan tiger rugs are as culturally fascinating, and as poignantly elusive now as the tigers themselves. In the early 19th century woven tiger rugs became the substitute for the increasingly scarce Indian tiger pelts. The small number produced remained within the monasteries, and unlike other works of Tibetan art appeared outside Tibet only in 1976, when an example was taken to the USA. After the more recent social upheaval in Tibet and the breakdown of religious sects and rites, the rugs, once used for meditation, were no longer needed and were dispersed. In the Lipton exhibition in 1988 there were 108 rugs, and there are considered to be probably fewer than 200 in existence to date. 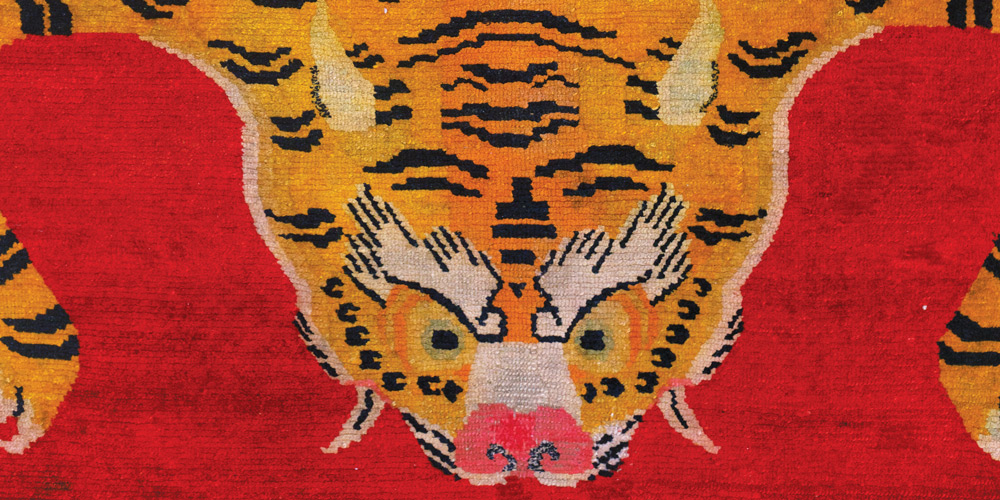 The informative and well-illustrated exhibition catalogue included the following entries: ‘Plight of the Tiger’, by Heather Sohl, Tiger Trade Leader at WWF; ‘Threads of Change’, by Susie Allen and Laura Culpan, Artwise Curators, explaining the inspiration behind the commissions; ‘The Fabrication Journey’, by Matthew Bourne, Director, Christopher Farr, London; individual entries on each of the contemporary art rugs, including illuminating quotes from most of the artists; ‘The Tiger Rugs of Tibet’, by Mimi Lipton; ‘Tibetan Tiger Rugs’, an introduction to the group of antique tiger rugs by Janie Lightfoot; and the artists’ biographies. 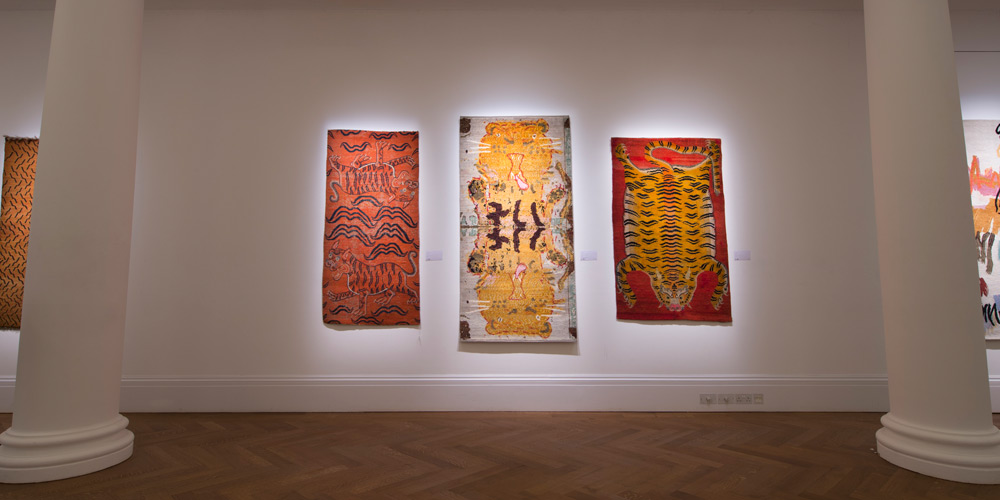 All the monies raised from the sale of these contemporary rugs go to the WWF for TX2, to sustain this vital conservation work, with profits directly supporting tiger conservation.WWF aims to generate £1 million from the sale of the rugs to sustain this vital work. There were sales of twenty-four rugs during the exhibition (including all of the Anish Kapoor rugs) and strong interest expressed in all the designs. It is hoped that these evocative and thought-provoking contemporary artworks will increase awareness of the plight of the tiger, and raise the support required to achieve the TX2 goal and beyond. 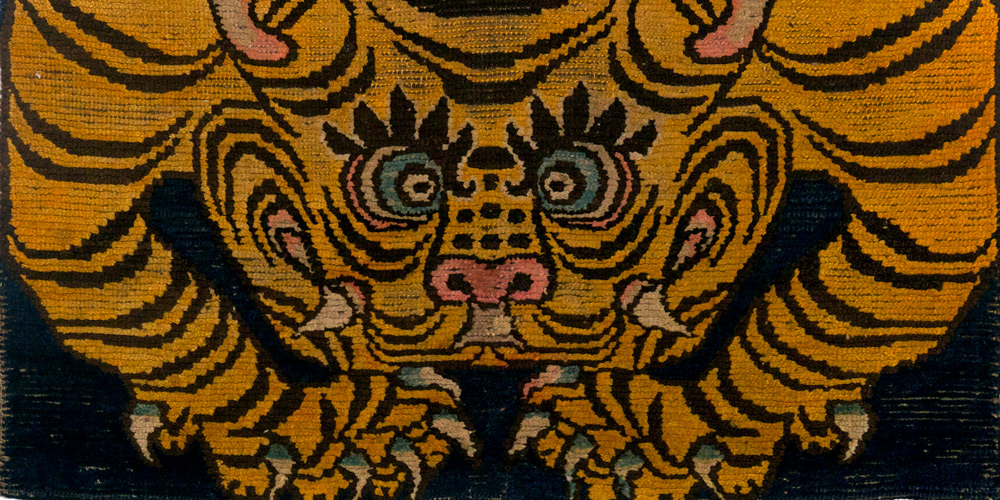 The instigation of this important project is thanks to the collaboration of the WWF, Artwise, Christopher Farr, Sotheby’s, all the participating artists, their studios and galleries, the lenders of the antique tiger rugs, along with the support of various other professionals. I encourage you to follow up on the WWF site to see the details of the individual rugs, and of the Tomorrow’s Tigers project. It is it important to consider that it is not just about the pieces, which we cannot fail to appreciate, but about being aware and receptive to the current issues and environment in which they play an instructive part. Please follow the migration of these beautiful tiger rugs on their journey, championing this important global initiative.