Featured in HALI 197 ‘Postcard from Kyiv’ recounts the journey of carpet dealer and scholar Aaron Nejad who returned to Ukraine in 2018 in order to seek out some truth in the story of the region’s distinctive and desirable ‘Bessarabian’ kilims. An abridged version of the article follows below.

To aid the ongoing crisis in Ukraine please consider donating through the charity Choose Love which is providing vital aid and services to those still in and fleeing the country, including emergency medical care, food, shelter, clothes, legal support, support for the LGBTQIA+ community and mental health support.

‘Ten years had passed since my last visit to Kyiv, and I was advised that things had changed greatly. Ukraine had emerged from the Soviet period to form a new democracy and, more recently, had come to view Europe and the west favourably. It felt like a good moment to be returning. During my first trip, I made the important discovery that the fine kilims with eccentric wefts that are traditionally referred to as ‘Bessarabian’ had been produced mainly in Ukraine, not in Bessarabia (the neighbouring modern Republic of Moldova), and that the best examples come from the Poltava region of eastern Ukraine. That trip, part of a series of journeys that included visits to Moldova and St Petersburg, had uncovered a rich and incredibly beautiful kilim weaving tradition in Ukraine which had remained unappreciated. My objective was to study this tradition in depth and to disseminate my work to the carpet and textile world. But, after initial investigations in 2008, I encountered several major obstacles. First, there was very little literature on the subject in any language. Second, the primary source for research was the museum collections whose administrators were generally very conservative. Add to that the language barrier and it felt like an impossible endeavour. It was clear to me that I would need to find someone to unlock doors. The breakthrough finally came in early 2018 when I attended a lecture at the Oriental Rug and Textile Society in London by Nataliya Cummings, a native Ukrainian living in the UK who organises cultural trips, and is also a dealer in Ukrainian textiles and costume. After her impressive talk, I asked her if she would assist in developing the project. Thankfully she seemed very keen and agreed to help with access issues and translation. I felt the impasse had been breached. 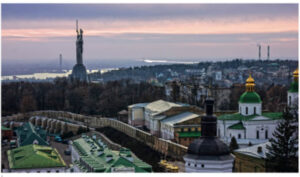 The Old City, Kyiv with the Motherland Monument and the River Dnieper

Nataliya advised that attitudes had changed greatly in Ukraine since 2008. There was more openness in public institutions and a desire among museum administrators to share their knowledge and the richness of their collections. She was right! Nataliya brilliantly negotiated access to important museum collections in Lviv, Poltava and Kiev. All I had to do was to turn up. So, in July 2018 I travelled to Ukraine in a positive frame of mind. We started in Lviv at the Museum of Ethnography and Arts and Crafts, a grand neo-classical building, the oldest museum in Ukraine. As Nataliya had suggested, the atmosphere was very different to my previous visit. We met the museum director, Stepan Pavliuk, and within half an hour we were drinking cognac together and toasting our new friendship. He offered me all the assistance I required and access to the stores. We saw nearly all the 60 kilims in the collection, including many remarkable pieces. We also met Halyna Vynogradska, Custodian of Historical Ukrainian Textiles at the Lviv Institute of Ethnology, a very experienced kilim expert, who shared her knowledge of production methods, dyes, dating and attribution to various locations. It was fascinating to listen to someone so knowledgeable who shared my passion for these wonderful weavings.

Lviv had felt like a very good start, and we arrived in Kyiv in a very optimistic frame of mind. The taxi ride from the train station to the hotel took us through Bessarab’ka Square, and past the large indoor Besarabsky Market where migrants from Bessarabia would come to sell their products. Nataliya had negotiated access to the kilim collection of the Museum of Ukrainian Folk Art. The museum is part of the ‘Lavra’ complex, or ‘Kyiv Monastery of the Caves’, a stunning group of Orthodox churches, monasteries and caves dating back to the 11th century, and museums that have collections of rare church artefacts and other treasures.

At the Museum of Ukrainian Folk Art I was introduced to Ludmyla Bilous, Deputy Director General of the Scientific Department, who was very curious to know about my project. She asked me a very good question: why would someone with no Ukrainian heritage have an interest in these weavings? I explained about my passion for textile art and my belief that kilim weaving is an art form. Ukrainian folk tapestry kilims are an important expression of this art form. Ludmyla seemed to respond positively to my comments and was as keen to hear my views as she was willing to share her extensive knowledge. The collection of the Museum of Ukrainian Folk Art includes around 1,000 kilims. Among them are at least forty pieces with inscribed dates from the 17th to the 19th century. We all agreed that this unique group would make a fascinating study in itself.

To aid the ongoing crisis in Ukraine please consider donating through the charity Choose Love which is providing vital aid and services to those still in and fleeing the country, including emergency medical care, food, shelter, clothes, legal support, support for the LGBTQIA+ community and mental health support.