Anatomy of an Object: A Phulkari Embroidery 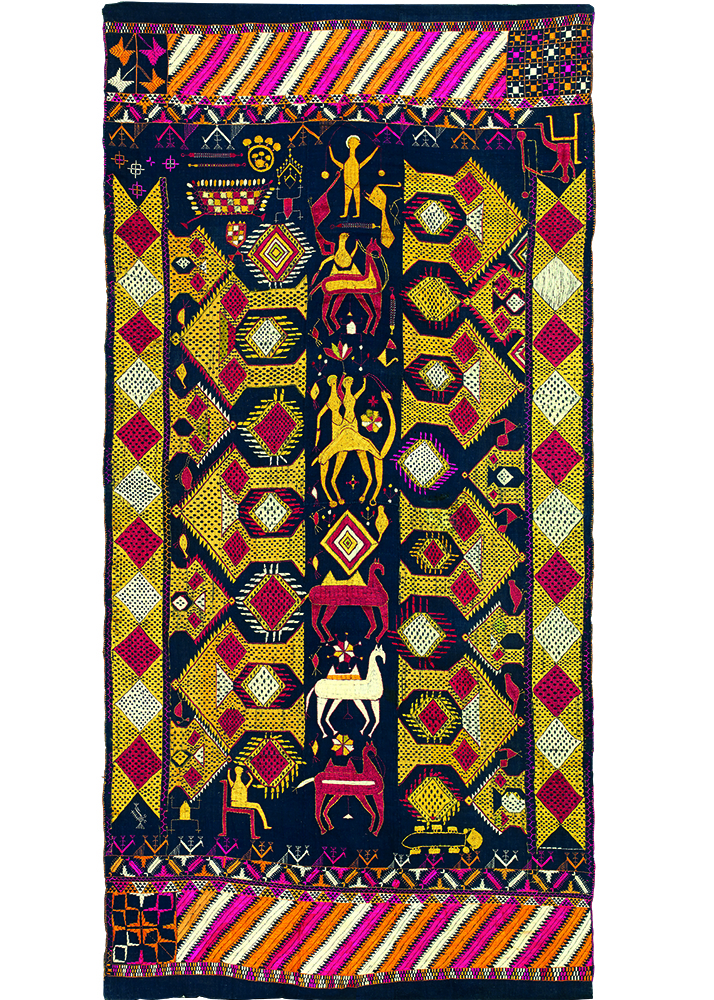 The silk embroidered shawls of the Punjab combine the aesthetic of folk art with the rich varied silk hues of precious luxury. Ben Evans reveals the techniques and traditions lying below the surface of these vibrant textiles.

Many types of Indian silk embroideries have appeared in books or been the subject of thematic exhibitions over the years. Aside from the Oriental Art Museum in Turin’s exhibition, one of the most spectacular classes of Indian embroideries, phulkari, have not received collectors’ attention or been the subject of in-depth research, despite coming from a rich regional tradition and having spectacularly colourful, dynamic designs.

Phulkari, literally translated as ‘flower work’, were made throughout the Punjab in the 19th and 20th century as well as to the north in the Hazara area; the making of phulkari seems to have died out post-partition. The tradition is definitely a regional rather than religious one: the more pictorial and representational designs seem to have originated in the eastern part of Punjab and Haryana while the more geometric non-figurative examples seem to have been made in the west, where the large Muslim population lives.

These head shawls or covers were made in the home for a bride’s dowry, with a grandmother starting to embroider as soon as a girl was born. A girl would start to embroider at a young age in order to create a significant number of pieces for her dowry; as such phulkari played an important part in marking a girl’s passage to womanhood. Designs were passed between generations verbally, and some patterns can be firmly ascribed to particular areas; there are also design variants such as the darshan-dwar type illustrated here, which were made in much smaller numbers and are thus rarer than many other types. This especially applies to pieces with a black ground. Designs may vary but shared aspects of making phulkari cohere the group: they are generally sewn using darning stitch in brightly coloured unplied floss silk on a ground of handspun and handwoven cotton called khadi.

Some were used to cover women’s heads, at other times they were used in various parts of the wedding ceremony to envelop the bride or to cover the bride and groom during the wedding procession. They were used as hangings and covers for important events as well as donated for use in temples. This darshan-dwar phulkari, meaning doorway to the divine, was made to be given to a temple in recognition of either a wish granted or of prayers asking that a wish be granted. Opinions differ as to whether this practice was restricted to the Sikh community or done throughout Punjab at Hindu temples. The layout here shows two arcades of pillared buildings with pointed roofs. The ends and side borders are interwoven with depictions of jewellery and scenes of tribal life, typical for a darshan-dwar phulkari. 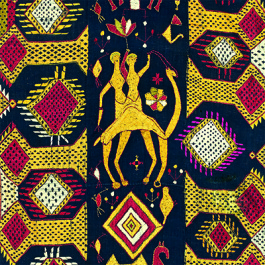 Learn more about the design elements of this phulkari embroidery. 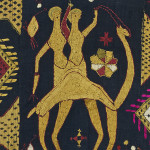 The ground fabric is dyed midnight blue or black and is made of widths of handwoven cotton khadi. The horizontal join is clearly visible below the camel’s feet, the vertical seam runs along the base of the building’s columns on the right. This shows that the embroidery was done after the pieces were joined; many embroideries from west Punjab appear to be have been joined after the embroidery was completed. The central field or path depicts a couple on a camel, perhaps recently married, along with numerous saddled horses, apotropaic motifs and depictions of jewellery. 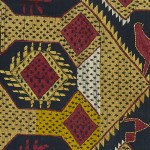 The embroidery on phulkari (and baghs) is done entirely from the back in darning stitch with unplied floss silk, thereby maximising the visibility and lustre of the silk. The back of the textiles thus shows only the barest minimum of pattern and thread. The architectural reference of these motifs is obvious but their origins are not; it is not clear whether these are temple entrances or a street scene. 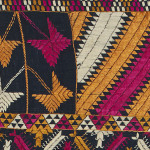 In some phulkari, and exclusively in the closely related baghs, the ground is almost completely covered in embroidery. However a small part of the ground cloth is always visible at the ends. The major and minor borders, which do not necessarily match, run along the sides and ends of darshan-dwar phulkari much like those on a carpet. 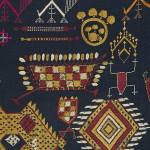 The appearance of bridal wedding jewellery clearly relates this phulkari to the dowry and marriage. There are bracelets and bangles as well as the tika head ornament and the nose ring; perhaps the large rectangular ornament is the doli or bridal litter. The ground fabric is typically dyed red or left white but also can be blue or black. The silks are mostly of rich saturated hues to contrast against the ground colour or, as seen on baghs, completely cover the ground in rich golden yellow or pinkish red.