As seen in HALI 207, Gebhart Blazek reveals that the secrets contained within carpets from the high plateaus of Algeria may not be dramatic revelations—but that they offer surprising information about the rugs’ construction, function and cross-cultural influences. 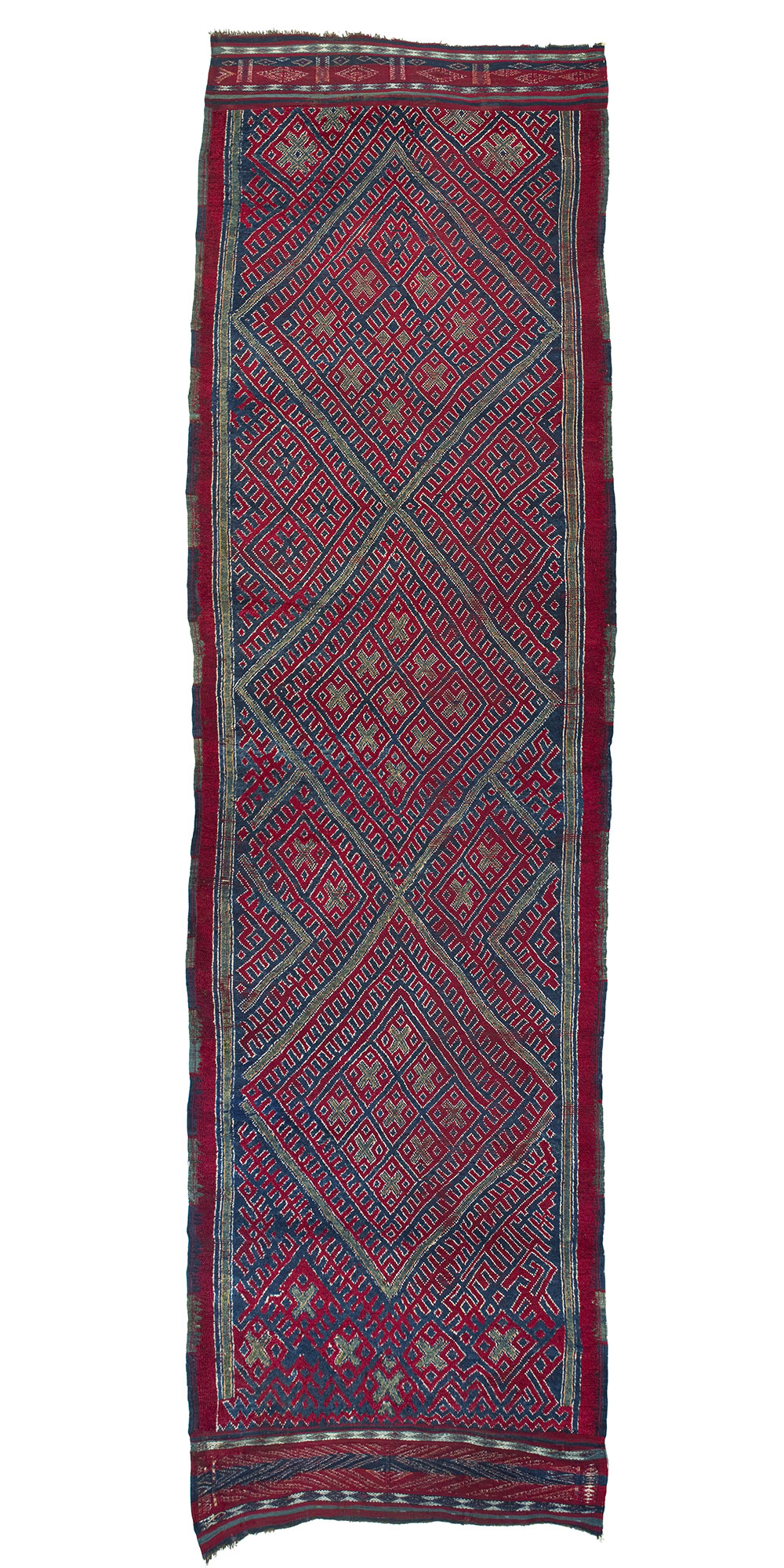 Unlike the carpets of Morocco, which have become increasingly popular over the past twenty years, Algerian carpets remain little known. However, it is worth taking a closer look at them, as the rural textile culture of eastern Morocco and the eastern Middle Atlas is strongly linked to that of Algeria. Indeed, that specific region’s heritage is in some aspects more closely related to Algerian carpets than to those from southern Morocco or the Arab groups between the Middle Atlas and the Atlantic.

This is especially true for carpets that were made under the guidance of a male master weaver, an approach that is widespread in Algeria. In Morocco it is encountered mainly in parts of the Middle Atlas, the Moulouya Valley, and some eastern areas near the Mediterranean coast.

Rugs from Jebel Amour in Algeria had a particularly strong influence on the rural weaving culture in eastern Morocco. They were made in the high plateaus of the mountain range between the urban centres of Aflou and El Bayadh. They served the nomadic groups there mainly as sleeping underlay and blankets. The designation frâch (Arabic for bed) underlines this type of use.

The aforementioned male master weavers (Arab. reggâm) were responsible for the patterning, while female weavers had the task of filling in the pile in the specified colours within the marks set by the reggâm. The masters’ marks were set with white knots, which appear as white contour lines in the pattern of the carpet. In many eastern Moroccan carpets, where the influence of Jebel Amour carpets is plain, such white contour lines also appear as a decorative element; but they have quite obviously lost their function as design markers.

In the culture of their origin, the rugs were usually laid with the pile facing downwards—the primary importance of the high pile was in its insulating function. The ‘beautiful’ side was understood to be the easily readable back of the weaving. This fact is made quite clear by the overall conception; the typically richly decorated kilim ends show their design on the back as well.

In some weavings from the Jebel Amour region, the connection to western Anatolian kilims or carpets seems overt. Algeria was under Ottoman administration from 1574 to 1830, and the influence of eastern Mediterranean designs is also reflected in urban embroideries. A more in-depth study would certainly also be worthwhile with regard to the productions further north in Guergour, near Constantine, or in the west at Tlemcen.

Only a few Jebel Amour carpets are known to date from the 19th century. These are mostly housed in museums in Algiers, with one other example in the Musée du Quai Branly (IV. No. 74.1977.4.24). 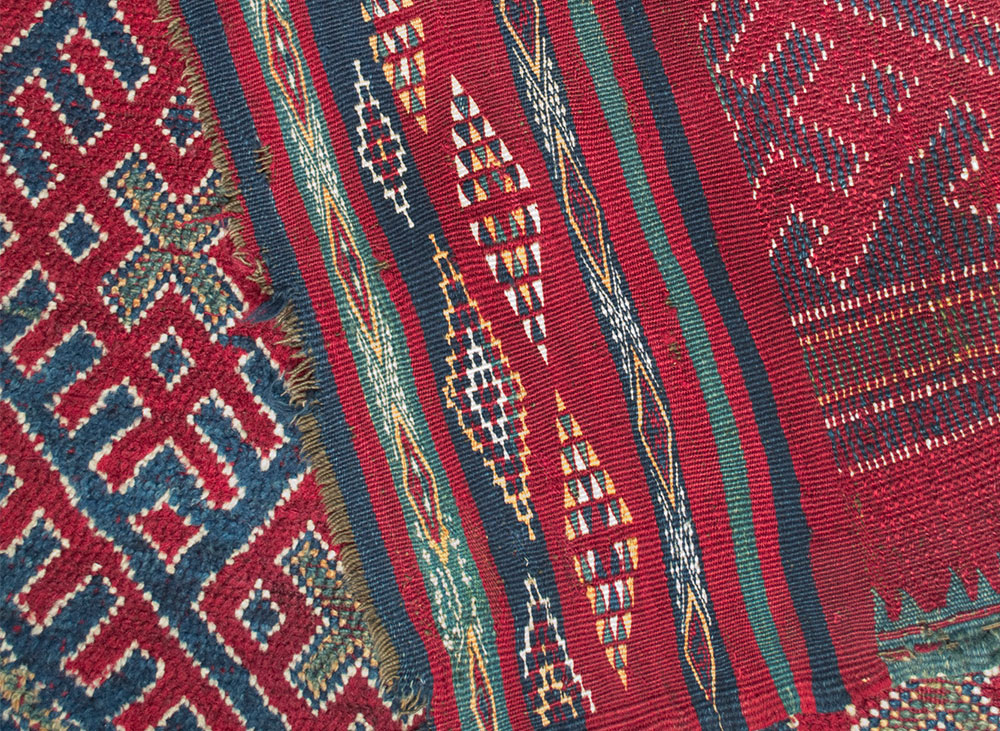 In his 1932 monograph Les Tapis et Tissages du Jebel-Amour, R. P. Giacobetti mentions five main colours that were traditionally used in the carpets of the region: red (madder); dark blue/ almost black (indigo); green (indigo + additive); small amounts of orange (probably pomegranate). The use of green is cited as being rare. In the present carpet, colour analyses have shown that the red was dyed with pure cochineal. This fact, the presence of two clearly different shades of blue, and also the general delicacy of the work give reason to believe that this piece was a special production for a highranking client. Cochineal is explicitly mentioned in a travel encyclopaedia from 1739 as one of the most important goods imported into the Maghreb. 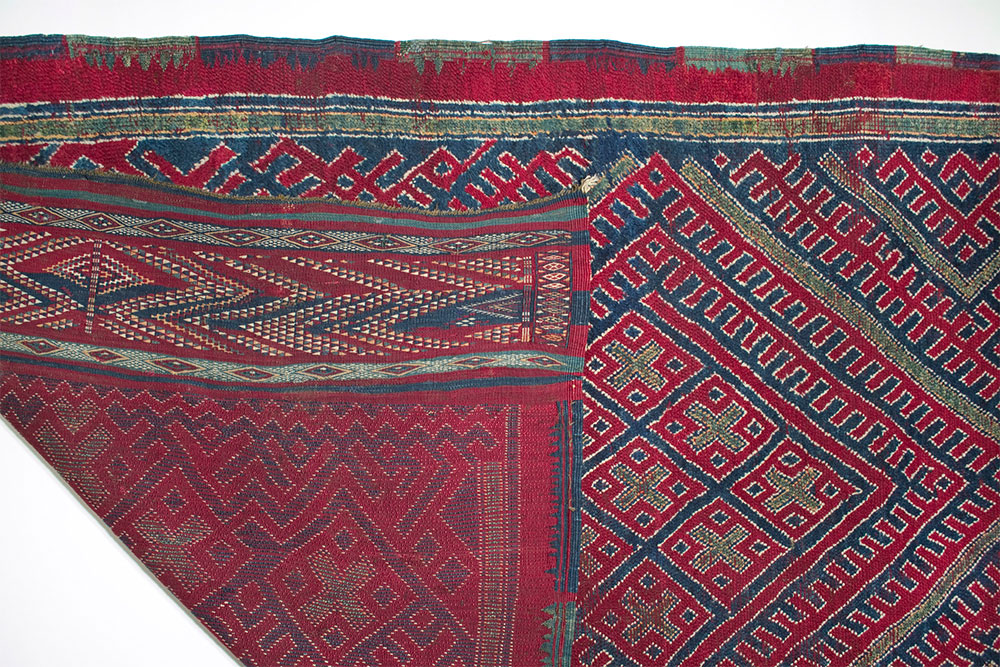 An unmistakable characteristic of Jebel Amour carpets is found in the intricately wrapped sides. Additional threads, sometimes multicoloured, are interlocked with the wefts of the basic structure in a technically complex manner. The function of the white knots as design markers, which the master weaver (reggâm) sets as a guide for the weavers, is clearly visible in the close-up. 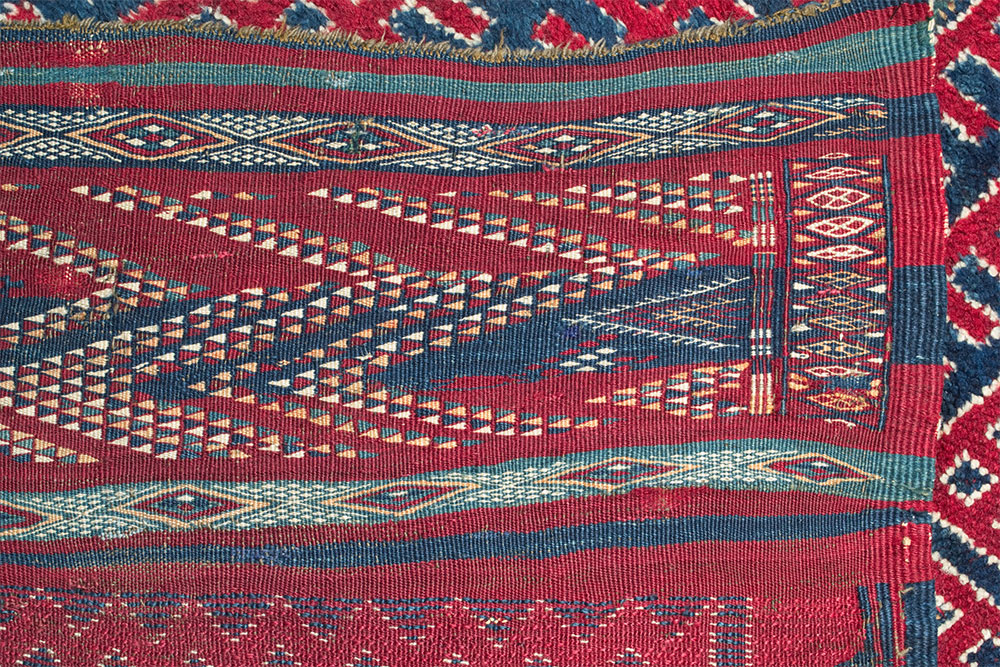 The elaborate decoration of the kilim ends, with a complex combination of weft wrapping and patterning with floating wefts (weft substitution), shows clear similarities with pieces from the Middle Atlas. Some design details are familiar from the women’s cloaks (abrdouhe) of the Beni Ouarain. The quality of the work is reminiscent of pieces from the northeast of the Middle Atlas. In some design details—the fineness, and especially the colouring—a likeness to works by the Zemmour can also be discerned.