This year’s Antique Rug and Textile Show in San Francisco was held at the newly renovated Greenwich Inn, a 1950s era motel at 2055 Steiner Street, in the Marina District, 27-29 October 2017.  Exhibitor James Cohen pronounced it, ‘much better suited to our needs, smaller, cleaner and smarter looking’ than the previous venue, which seemed to be the consensus among those who showed there. Emma Gardner reports. 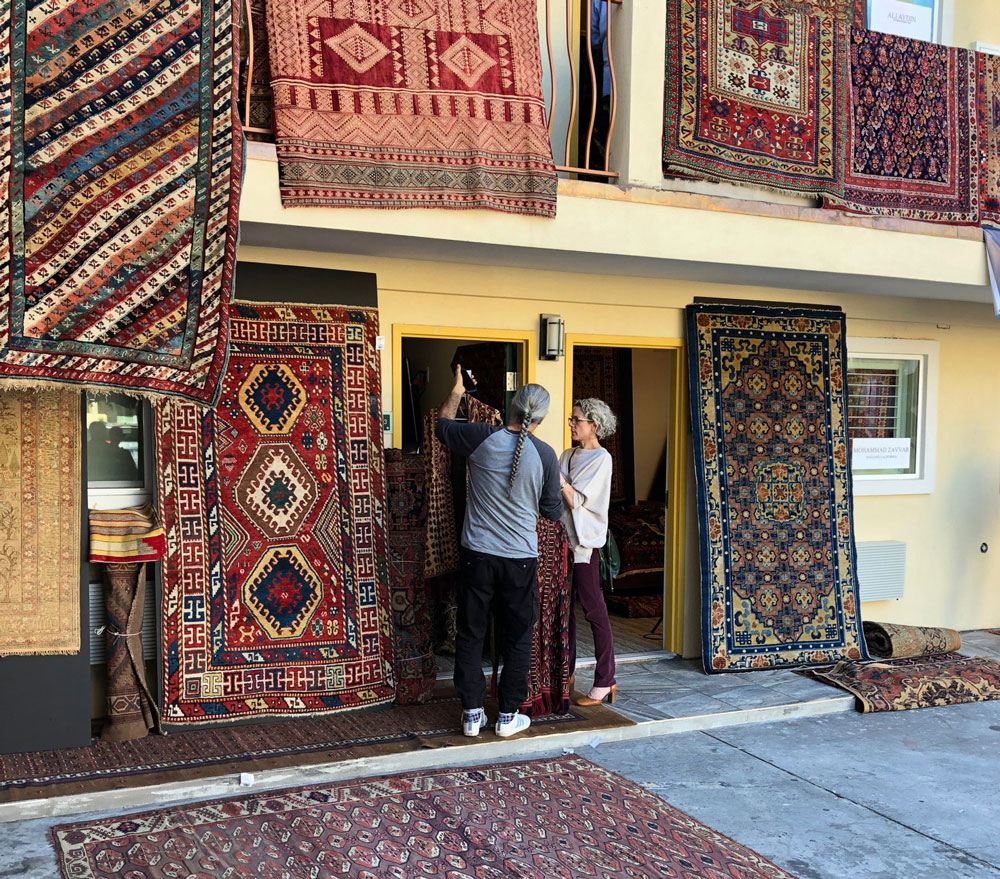 Twenty or so exhibitors each occupied a room in the two storey U-shaped building, which surrounds a courtyard open to the street. Bright and appealing wares were draped over the balcony, and some were laid right on the courtyard ground, giving the place the authentic feel of a bazaar.

Relatively new to the seductive world of antiques—my background being in contemporary design—I decided the best approach was an investigative one. I made my way in by asking dealers about the rugs I found most compelling, and soon started asking which they loved the best and why. In some cases the pieces were the same, but while there was a great deal to learn about all of them, it was hearing details about things I might otherwise have overlooked that began to give shape to the vastness of just how much there is to know, and lent increased specificity to my already piqued curiosity. 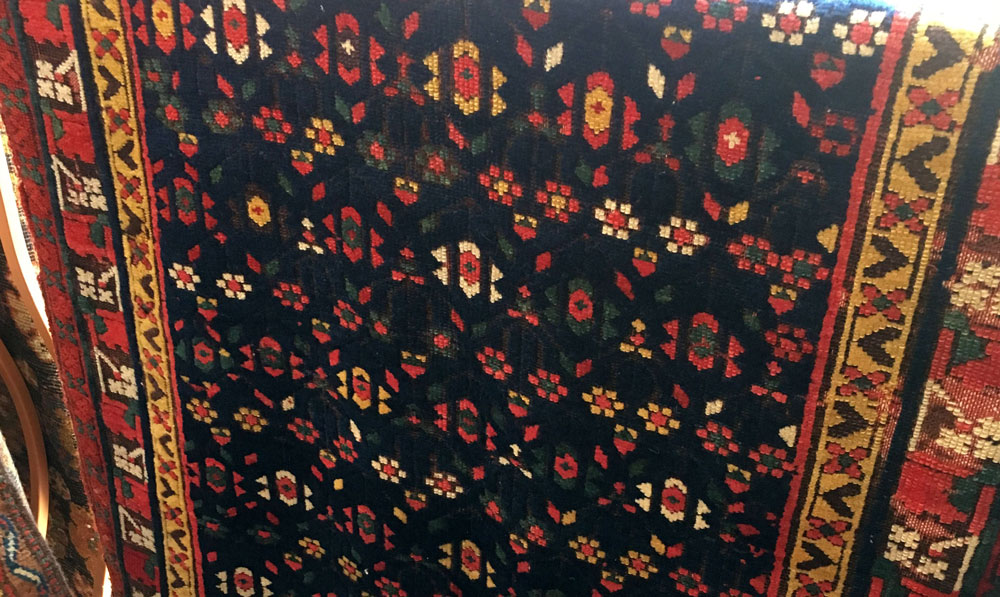 On one balcony Hayko was showing a vibrant Persian Kurdish runner from the 1860’s with bright colours and a lovely hand. The difference in intensity of colour between this rug and the one next to it though, a playful Baluch rug from 30-40 years later, was striking. Regardless of relative value, the staying power of the vegetable dyes from a century ago continues to amaze me. That and the whimsy of its polka-dot ringed florals made it look positively Scandinavian. 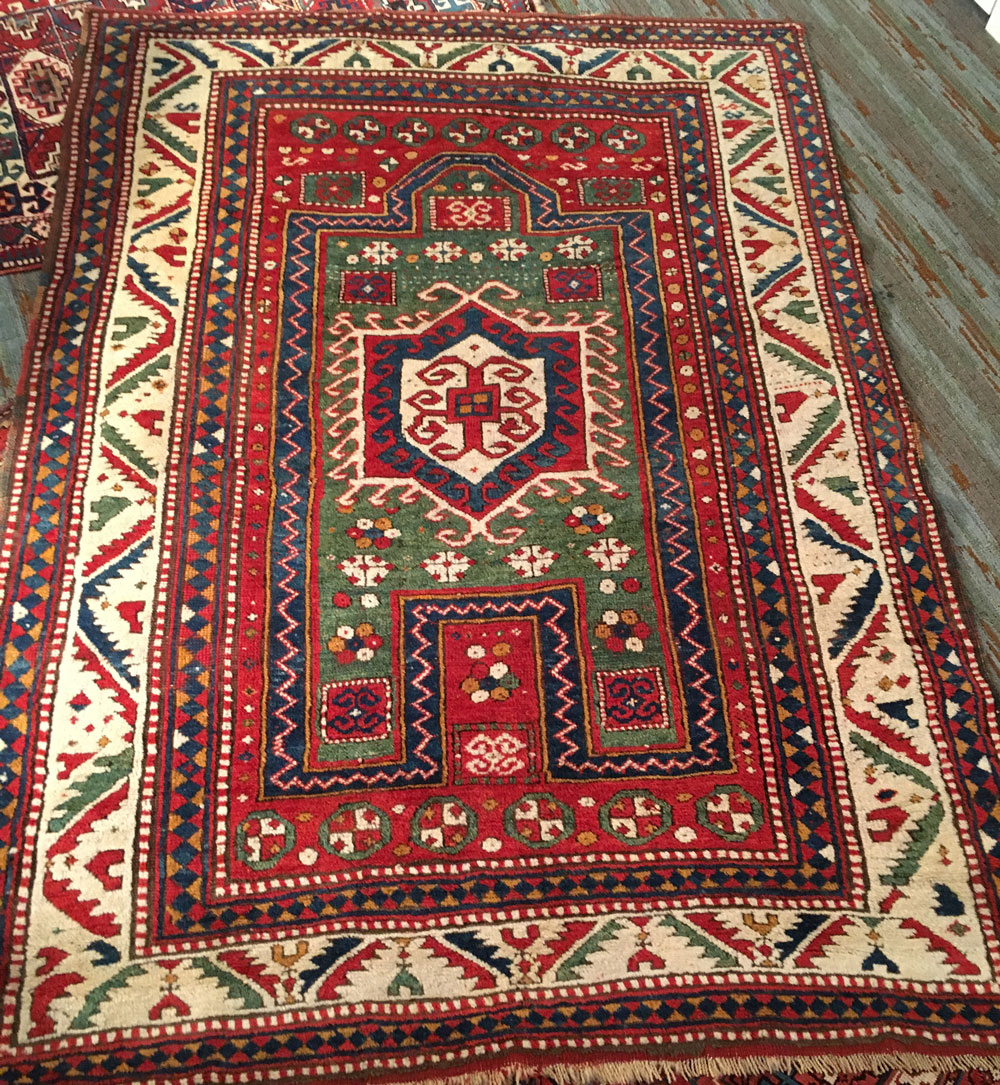 Hagop Manoyan’s warmly lit room offered elegant examples of several different styles, including a delightful Fachralo prayer rug, circa 1880, from the southwest Caucasus. Its unusual white main border emphasized the crispness of its colours, and charming inconsistencies revealed its origins as a singular, rurally produced rug.  He also had a Persian Afshar tribal rug in perfect condition with thin lines of flat weave amid the rich pile, combining deep maroon brown guls, with cerulean, orange, red and black ones, all adding up to a lively and compelling rug. On one wall an 18th century Chinese rug featured horses in aqua, indigo and palest yellow against a faded but still characteristic pale peach ground. 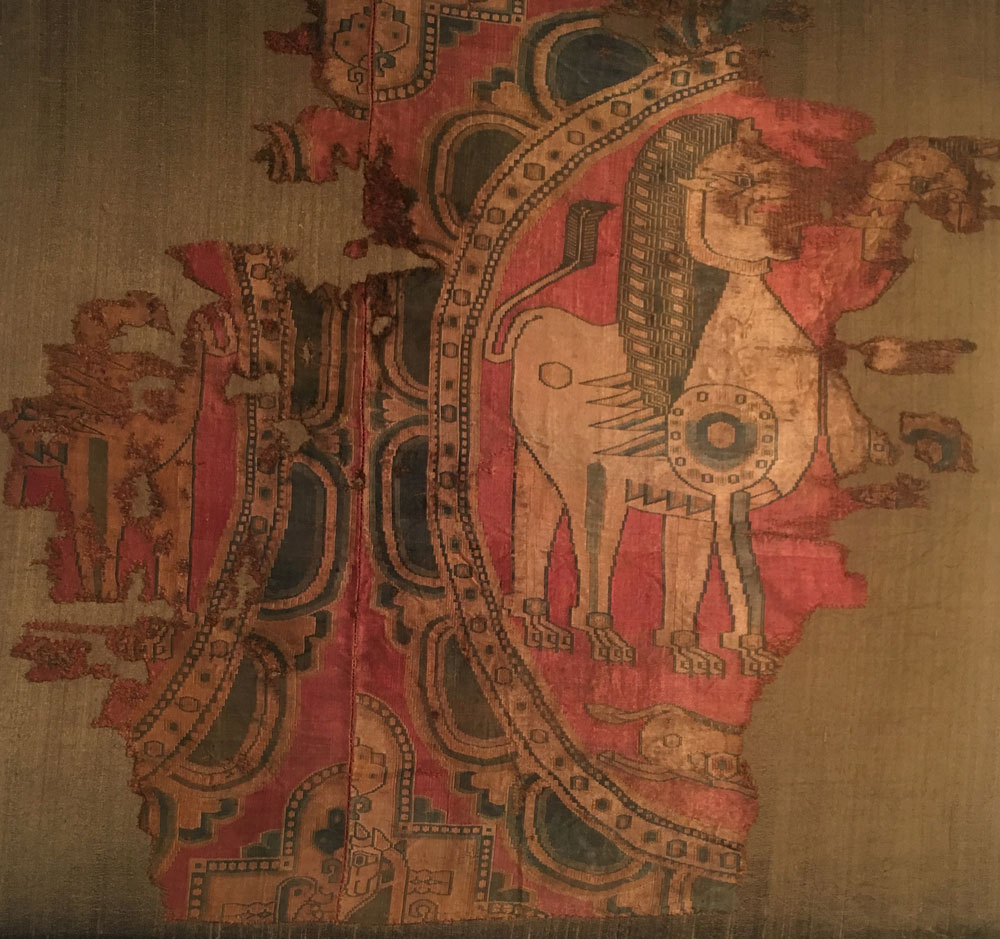 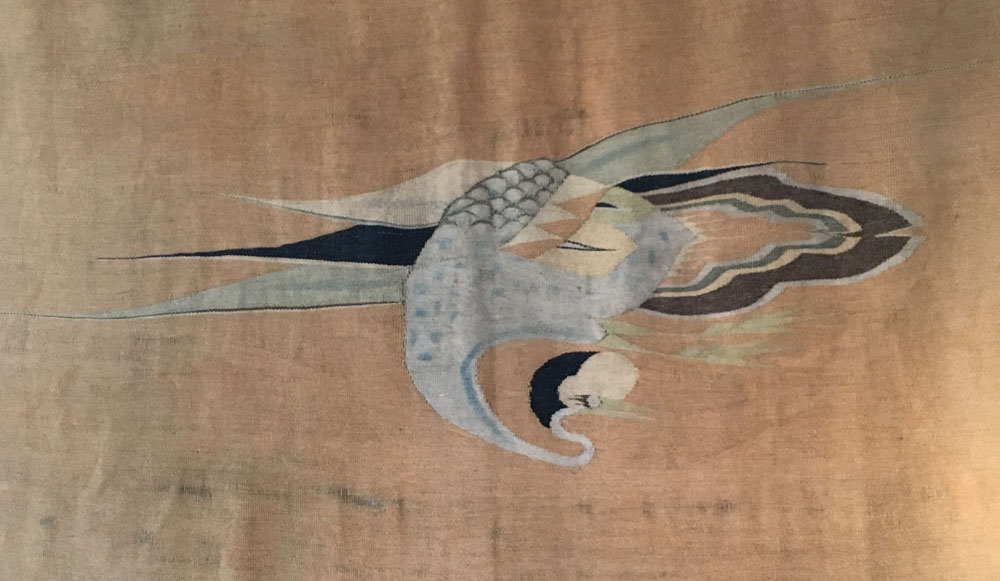 Sam Coad opted for spare drama, displaying only three special pieces, including a mounted 7th or 8th century silk textile fragment, found in China but, he surmised, likely made farther west. Most of an imposing winged lion is visible in a bordered medallion indicating the high status of whoever wore this coat. He also had two striking 17th century central Chinese Mongolian flat weaves. Likely from the Ming period, they would originally have been featured on floats during religious ceremonies. Their original dark rose colour has faded to a subtle pale apricot but the fo dogs on one and floating cranes on the other are still powerful, both in colour and confident form. 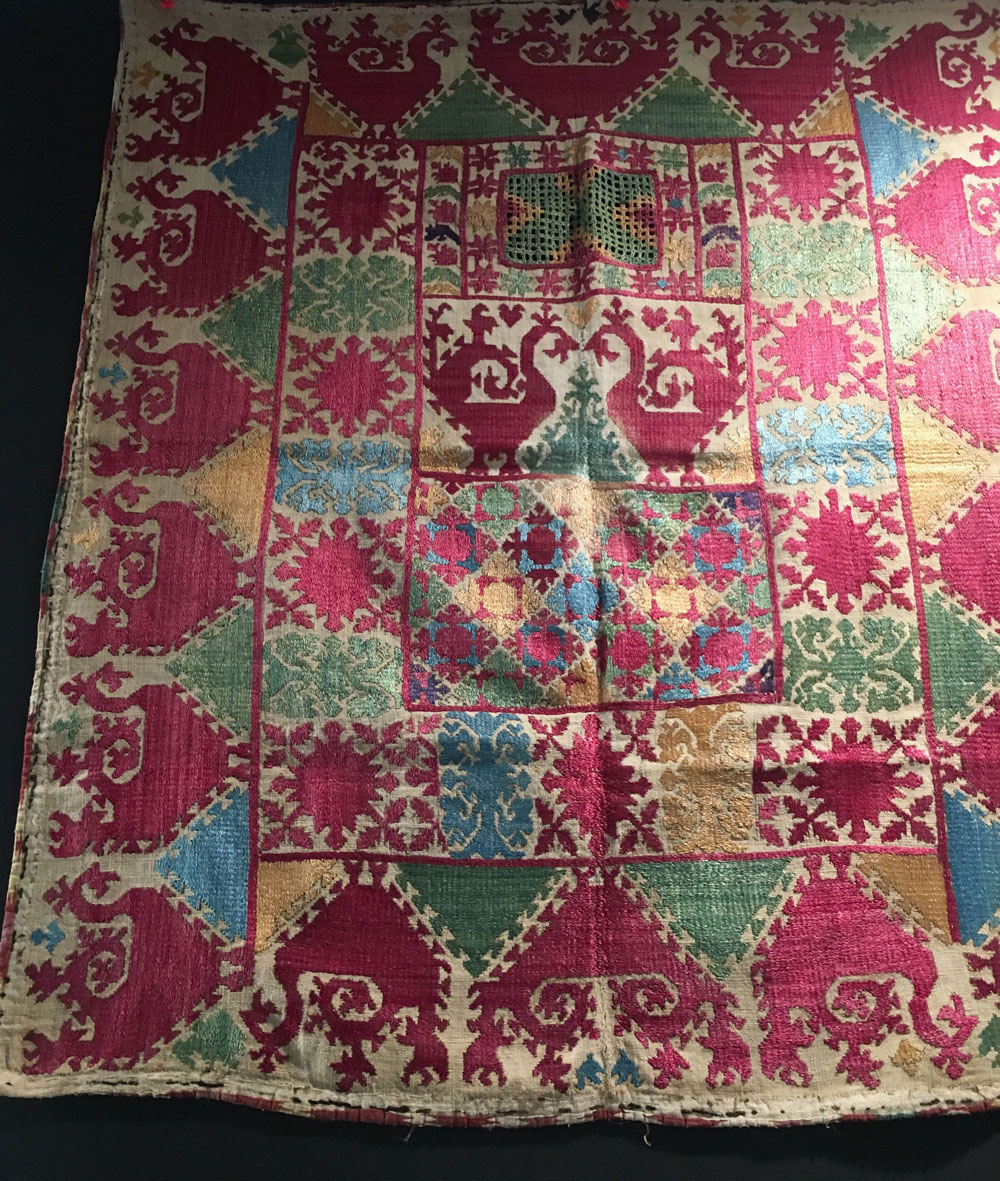 I was drawn to many of the brightly coloured pieces at Turkish Folk Arts, including a Tajikistan ruband, bridal veil, with silk embroidered on cotton from the late 1800s and a charming garden Bakhtiari, which might have provided inspiration—to mix cultural metaphors—to the landscape architects at Villandry. In addition, there was a woman’s belt from Uzbekistan circa 1900, in very good condition with strong pleasing colours in a black field, featuring the tiny expert Lakai cross-stitching. An early 20th century Turkmen chyrpy collar stood out to me for its playfulness and its gorgeous colours; hot pink, magenta, mustard, chartreuse and cream. There were lovely, if not perfect, examples of a Shahsavan tribal spoon holder and a mirror cover from Kirghizstan to protect against evil thoughts. 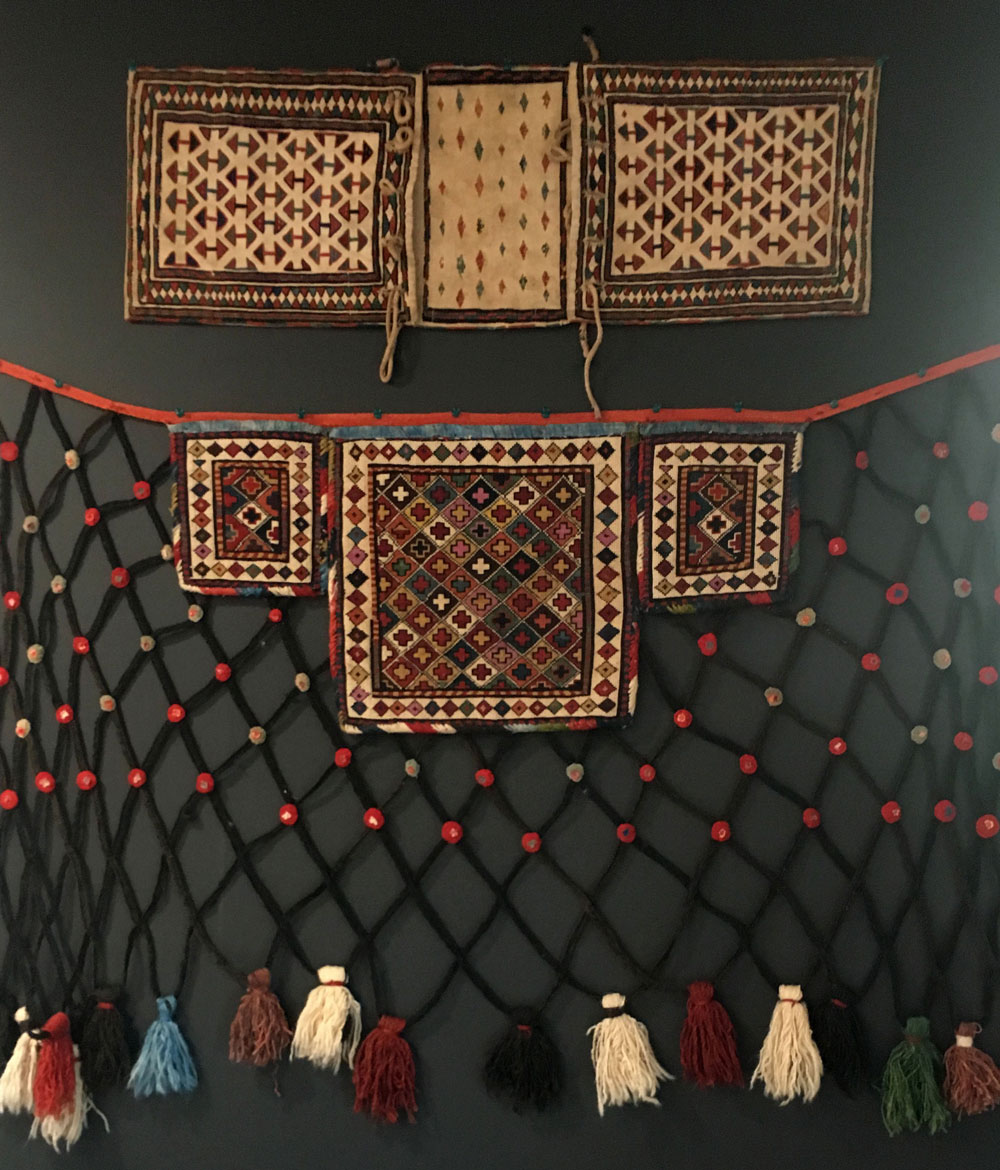 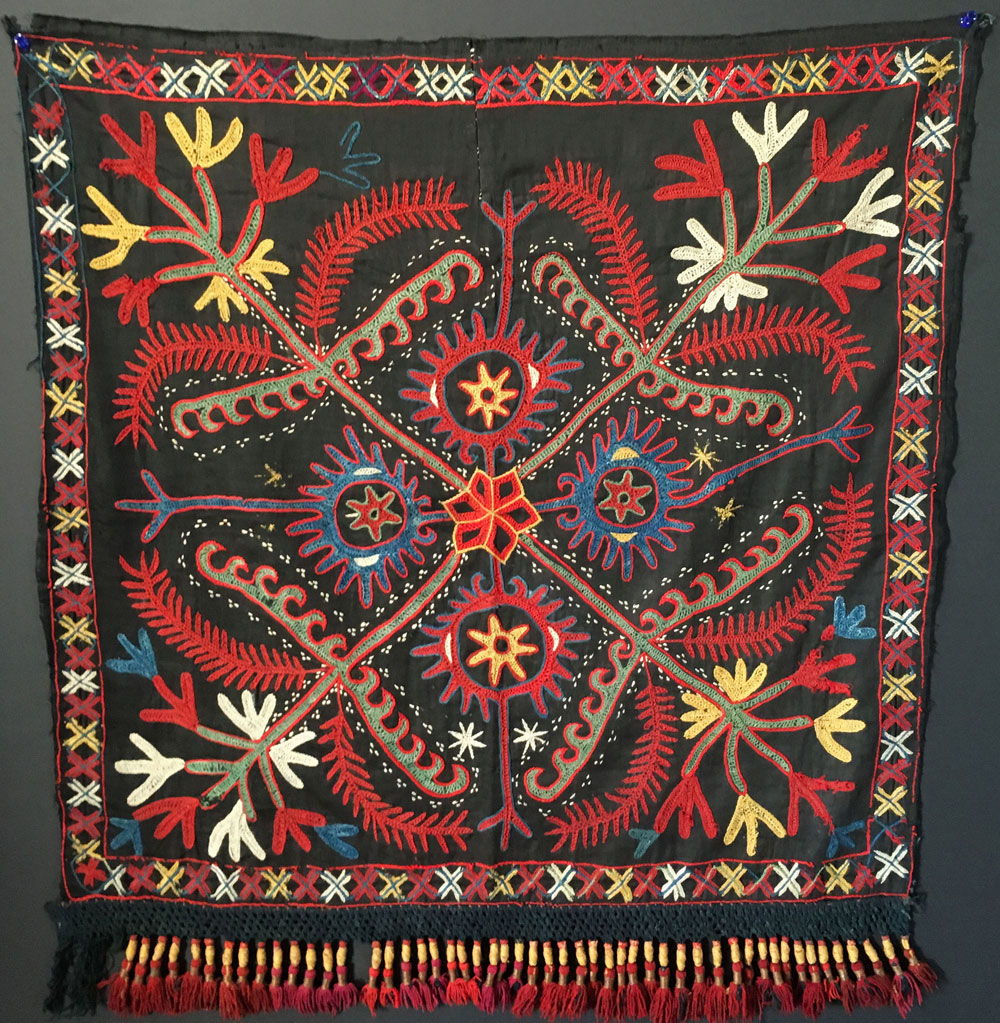 At Nemati Collection, favorites of the dealer were two needlework cloaks from Tajikistan, about 120 years old; one for a man, with a bold geometric motif and the other a bridal cloak with a pale yellow field for the occasion. Both had fine work, bold motifs and intense colour. Another special, very unusual seeming piece, being sold anonymously for a prominent New York collector was a Kerman rug circa 1880s. A custom design for a special occasion, possibly a wedding, it seemed to have a decided European influence, with its almost Aubusson borders. 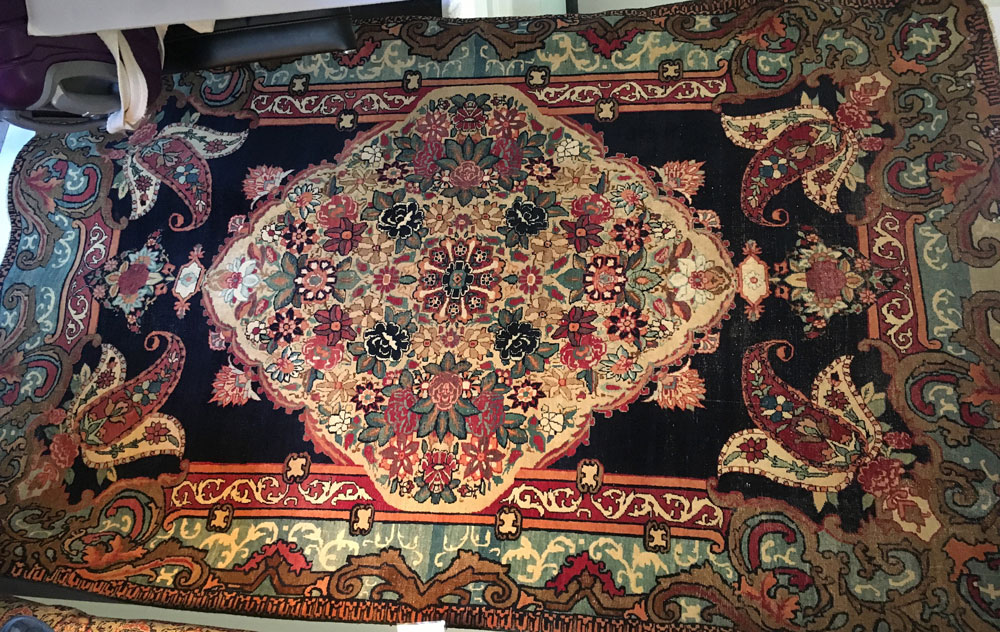 On one wall a camel rug from Turkmenistan, circa 1900, caught my eye with good quality, and its extremely pleasing pinks, reds and black, with small but defining accents of rich blue and dark green. There was a small gathering in the courtyard around a runner from Northwest Iran circa mid-1800’s offered by Rodney McDonald. Noteworthy were the uncommon white ground, which leant the palette a vivid quite contemporary look, and the tiny dollar sign woven into the ground in one corner! 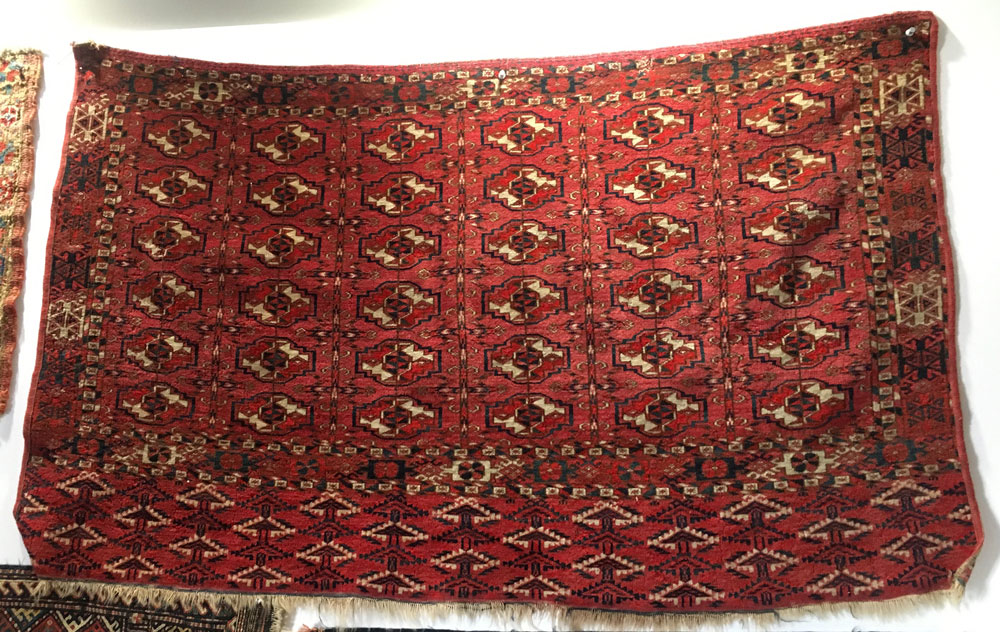 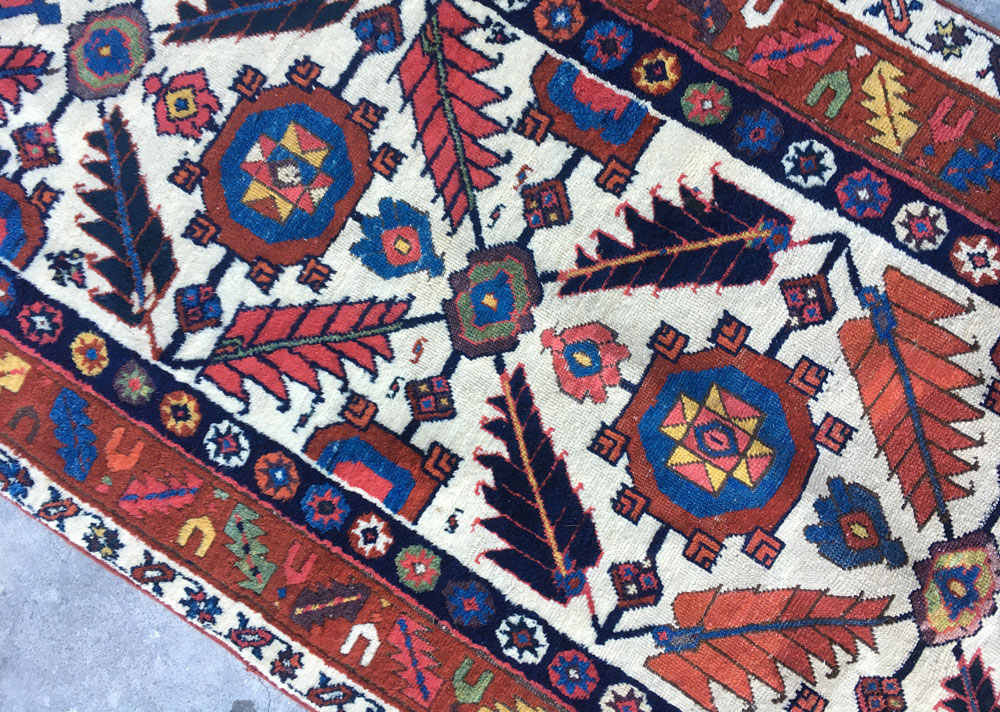 I met with the friendly and informative Sandra Whitman who had the most Far Eastern rugs of anyone I saw. Mainly specializing in Chinese, Tibetan and Mongolian, she also showed me a Kashgar fragment from the 1700s, featuring an unusual green that wasn’t used after 1900. The original size is not known but the motif suggests it might have been quite a large rug. 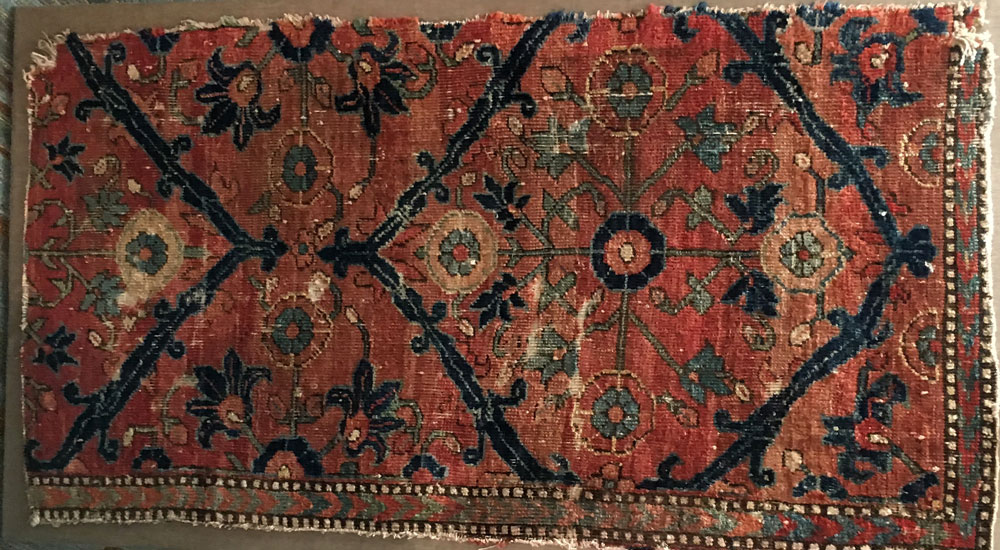 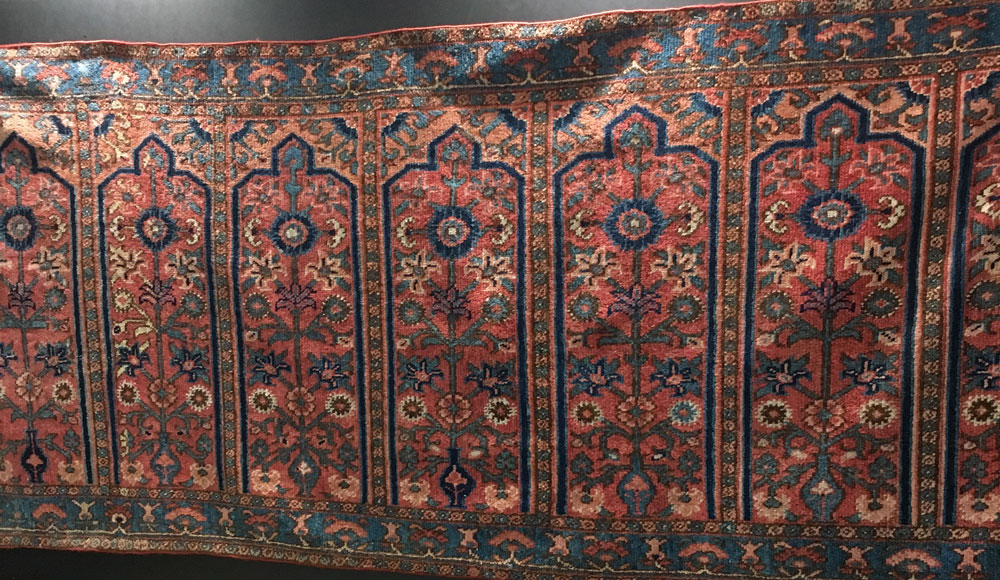 Of interest too, were a  Kashgar saf (multi person prayer rug) from the 18th century, when people must have been much narrower than they are now; Tibetan seat covers in golds and blues with their traditional in-turned corners from the 18th century, still batched as they were woven; and a beautiful, richly coloured high pile altar rug, which she believed was originally from Bejing, although some have suggested Ningxia. This boldly designed, and incredibly soft piece is from the late 1800s or early 20th century. 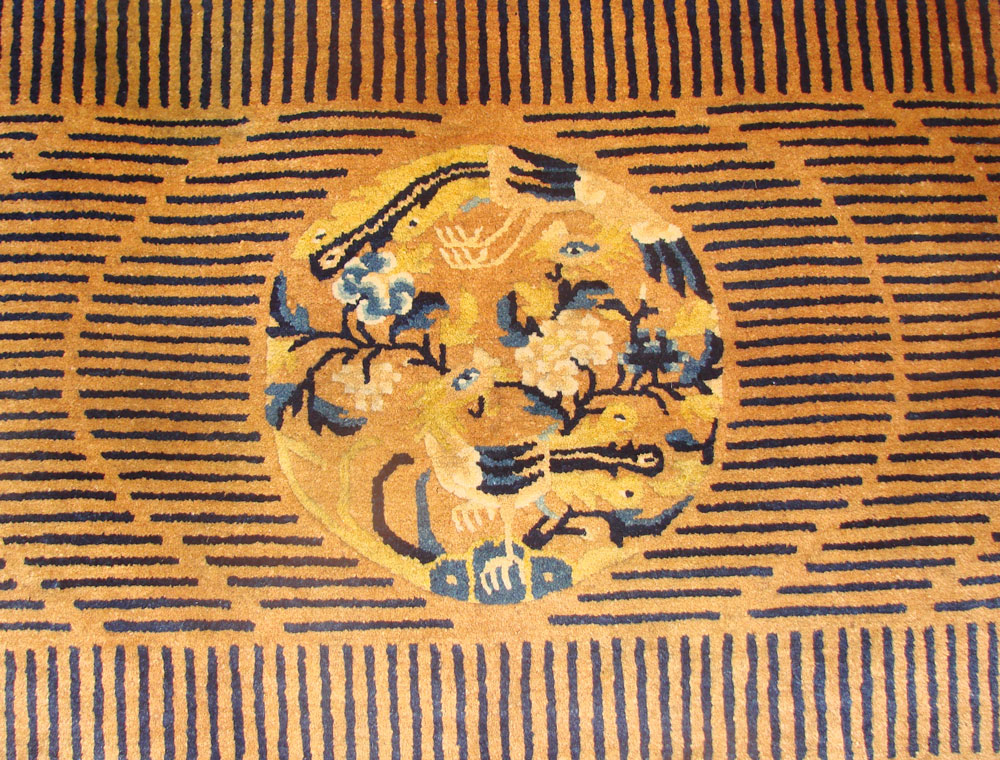 Ulrike Montigel, of Galerie Arabesque in Stuttgart was the only dealer with almost exclusively textiles. And quite a collection it is. Among the treasures were a framed Chinese rank badge from the 17th century, part of an old German collection she is selling; a haunting and beautiful painted silk Tibetan tantric textile is likely to have been hung for protection at the entrance of an Imperial Chinese court; European tapestry pieces; and a fascinating composite suzani prayer piece with some stitched silver in the central floral motif, which has since become oxidised, producing an almost jewel-like hardness and a waxy sheen. At either end borders soft, silvery lilac embroidery had a mesmerising effect. 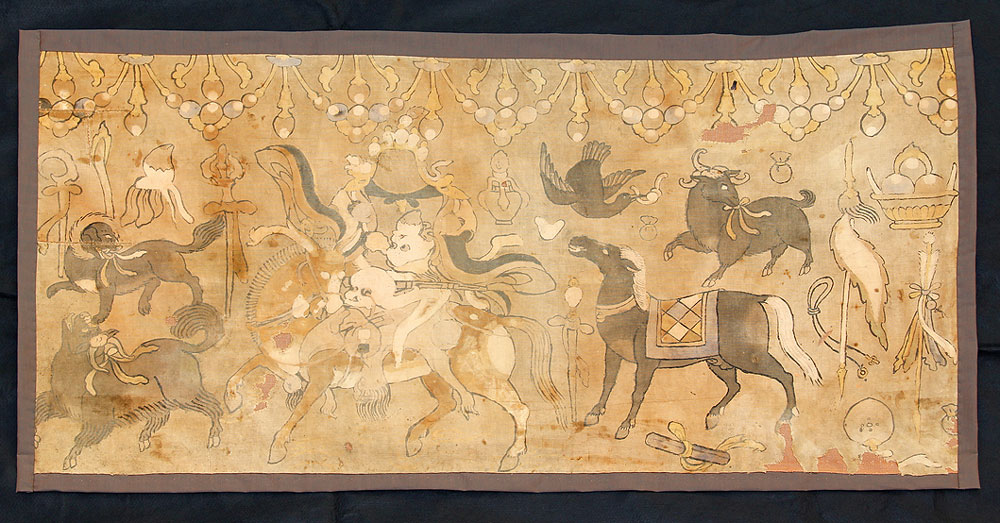 On the whole, even as sales may not have been as brisk as in the past, exhibitors agreed that the show had been worth doing. The slower pace of sales no doubt reflects the shift from a baby boomer to a millennial economy. But as these new buyers mature and evolve one hopes that passion and exquisite craftsmanship will find their audience again, and most of the dealers I spoke to said they’d be back next year. 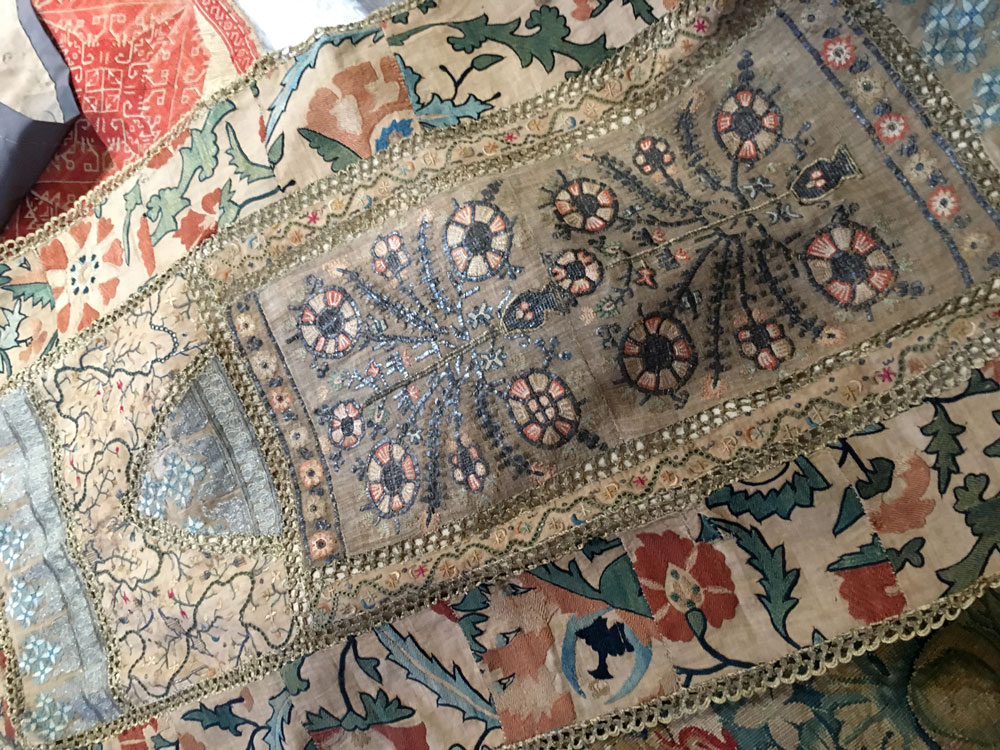