An auction in Rouen, capital of Normandy, marked the lifting of many Covid-19 restrictions in France, and a case of miscataloguing and low estimates brought together the European trade hoping for bargains 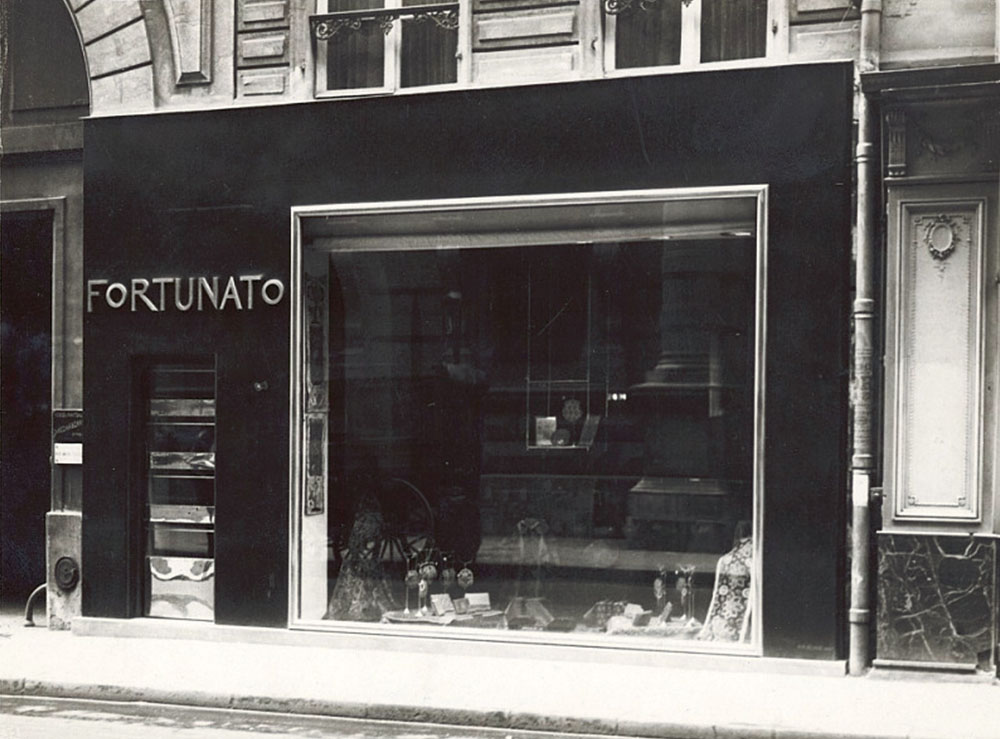 On 15 June French President Emmanuel Macron announced that a number of coronavirus restrictions were being lifted. Cafés and restaurants reopened across France, but for carpet dealers the liberating factor was the chance, at last, of a good country auction sale. On a grey, overcast and slightly wet Saturday afternoon dealers from Turkey, Italy and all over France flocked to the ancient town of Rouen, where Normandy Auctions offered thirty-three antique rugs. Who had owned them was largely a mystery, as it appeared none had been published before. 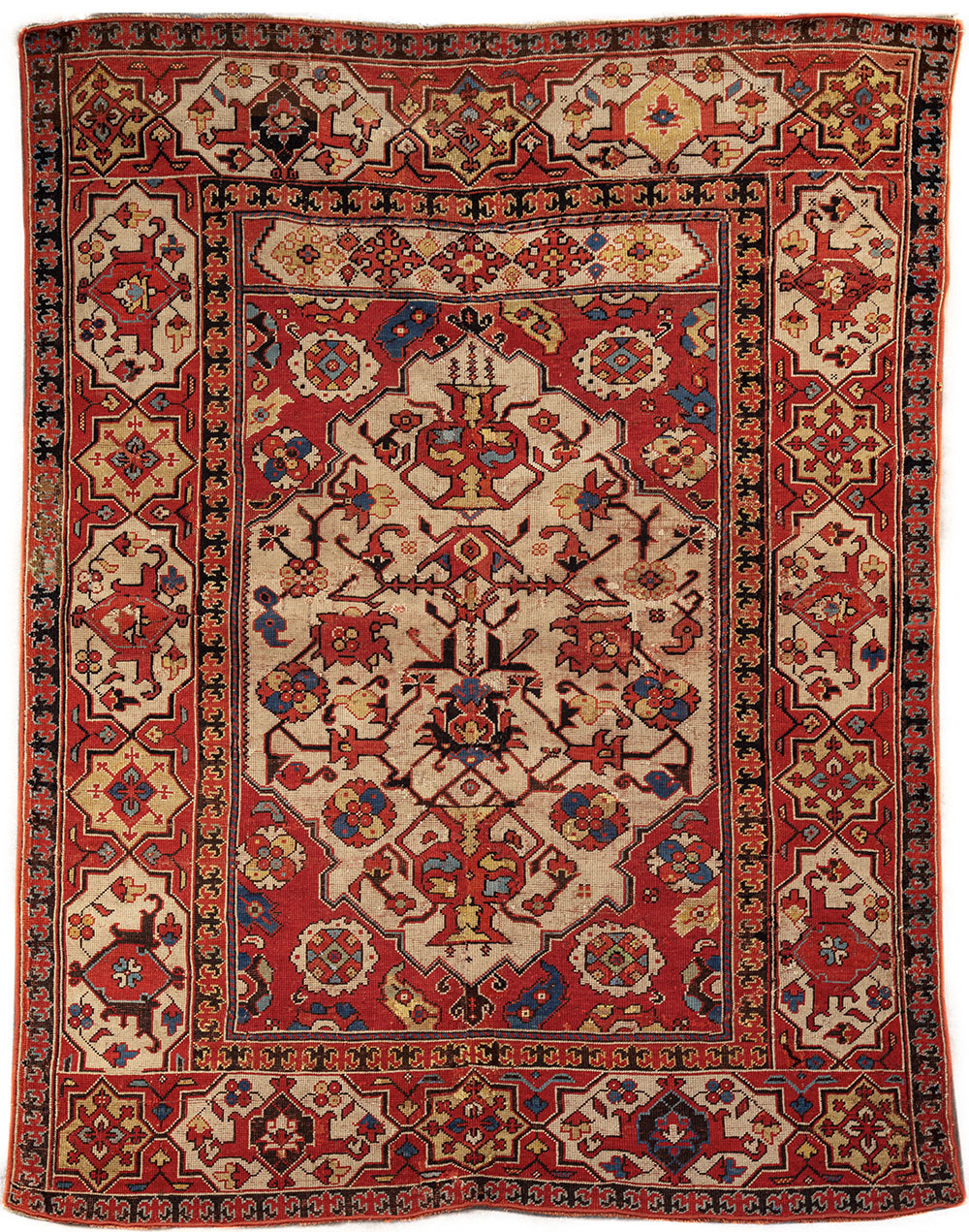 The group of rugs started with lot 207, an ivory-ground so-called ‘Transylvanian’ rug. Estimated at €4,000–5000, it fetched €18,960. The auction room, packed with international dealers, must have sensed that something was wrong with the estimates. After all, the cataloguer had been under the misapprehension that the rug had been made in Transylvania in Romania. It is widely known today that rugs of this this type were woven in western Anatolia.

Collectors expect their ‘Transylvanian’ rugs to be in pristine condition, given that many of them hung for centuries in the churches of Transylvania before being leaked onto the market. But the condition of this rug suggested that it had most likely passed much of its time in western Europe: the pile was low and damaged in places.

Stefano Ionescu, the world authority on this particular group, commented: ‘Today we know of twenty-four double-niche “Transylvanian” rugs with a st arand-cartouche border and niche showing one or two mosque lamps. Only one is white ground and there are just two examples with a cross panel. The cartouches contain nicely drawn palmettes but there are some irregularities in the drawing. This example was probably woven shortly after 1650.’

Lot 208 was catalogued as ‘Très ancient tapis Arménien Ardzgonk, fin XVII ème’ and estimated at €4,000-5,000; it fetched €45,505. A very pretty yellow-ground rug of the type referred to as Sauj Bulag Kurdish, with a variation of the harshang design often associated with larger formats made in sets: the mian farsh or middle carpet is surmounted by the kellegi (head carpet), and a pair of runners (kenarchs) appear on each side. The border pattern here is unusual with its cartouche and octagon perhaps derived from the west Anatolian rugs of the ‘Transylvanian’ type. 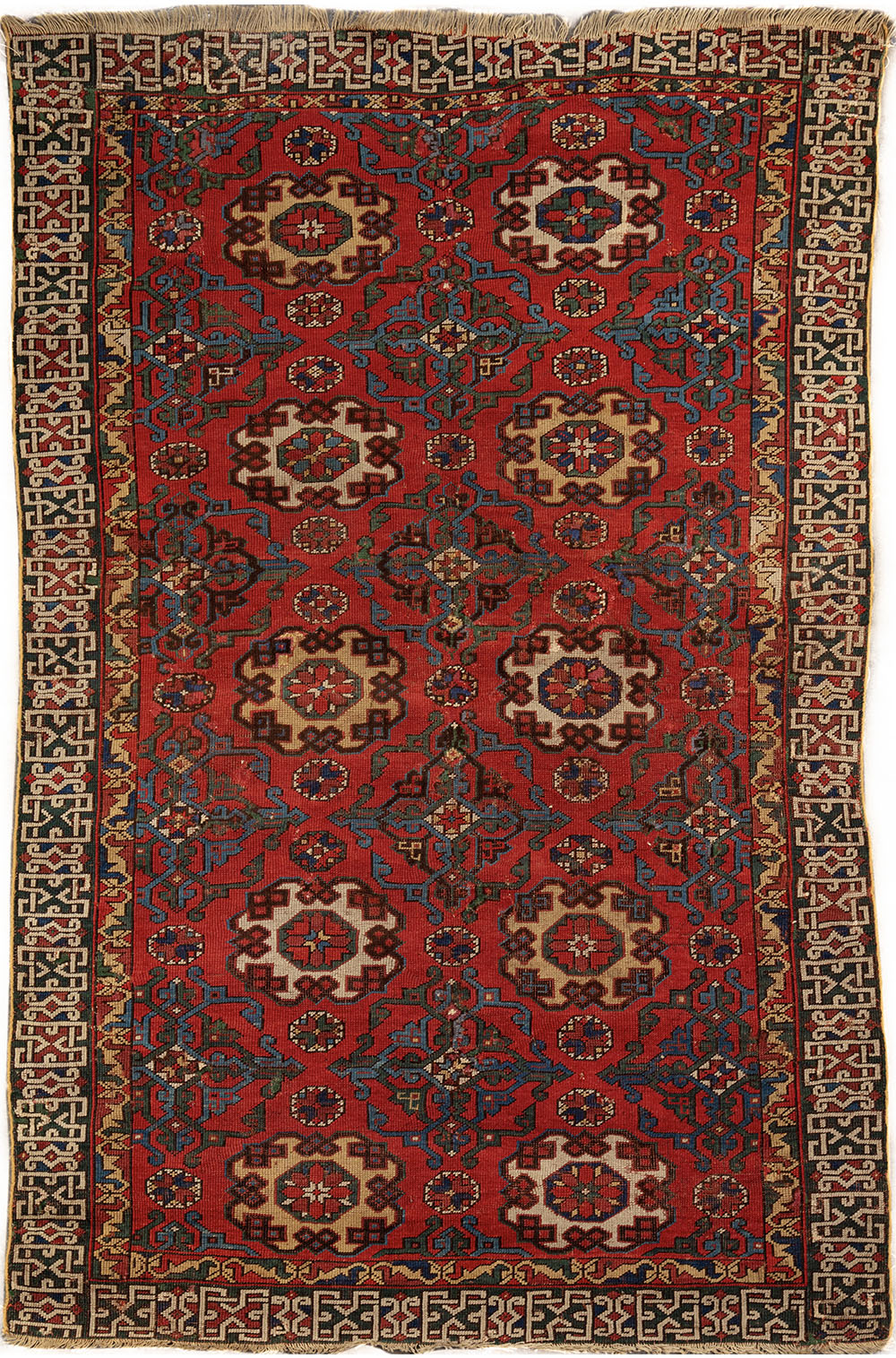 The star of the collection was lot 209, a superb late-15th-century west Anatolian rug of the ‘small pattern Holbein’ type. Miscatalogued as ‘Caucasian Holbein, Armenia 17th century’, it was grossly underestimated at €4,000–5,000. The rug is certainly one of the very best of this type. Somewhat rarer than the majority of the surviving examples which have a two-coloured background are those with a single-colour field, in this case red and possibly the most glorious red extant on any surviving rug. It is in relatively high pile and so unusually retains much of its lustre, missing just its outer guard border and a few lines from the primary closed-kufic border. Quite unusual on a Holbein, but not unknown, is the inner minor border, a pattern normally associated with ‘Bellini’ or ‘key-hole’ rugs.

Professor Kurt Erdmann from Berlin spotted this rug, probably in the 1930s, at Galerie Fortunato on 10 Rue Cambon, Paris, across the street from couturière Madame Chanel. Fortunato’s had the most beautiful art deco façade, immortalised in the archives of the Smithsonian in Washington, DC; now without its façade or its Holbein rug it is just the Bar le Vendôme. This star lot was secured for an extremely modest price of €126,400. In a well-catalogued London or Wiesbaden auction it could easily have fetched far over three times this price.

A unique northwest Persian rug, possibly Armenian, with glorious colours and on a silk foundation, constituted lot 214. Misattributed to 18th-century Konya and estimated at €1,800– 2,000, it fetched a remarkable €96,065—a world record.

Historically, carpets have been miscatalogued and underestimated at auctions in France, making it one of the few places where one could acquire bargains. Might emergence from Covid-19 prove to be the the dawn of enlightenment for the country’s auctioneers?