The sale of the Jacques Cadry Collection of oriental carpets, manuscripts and icons at Mossgreen Auctions in Sydney on 2 April 2017 set new records for sales in Australia and pointed to some emerging trends. Susan Scollay reports: 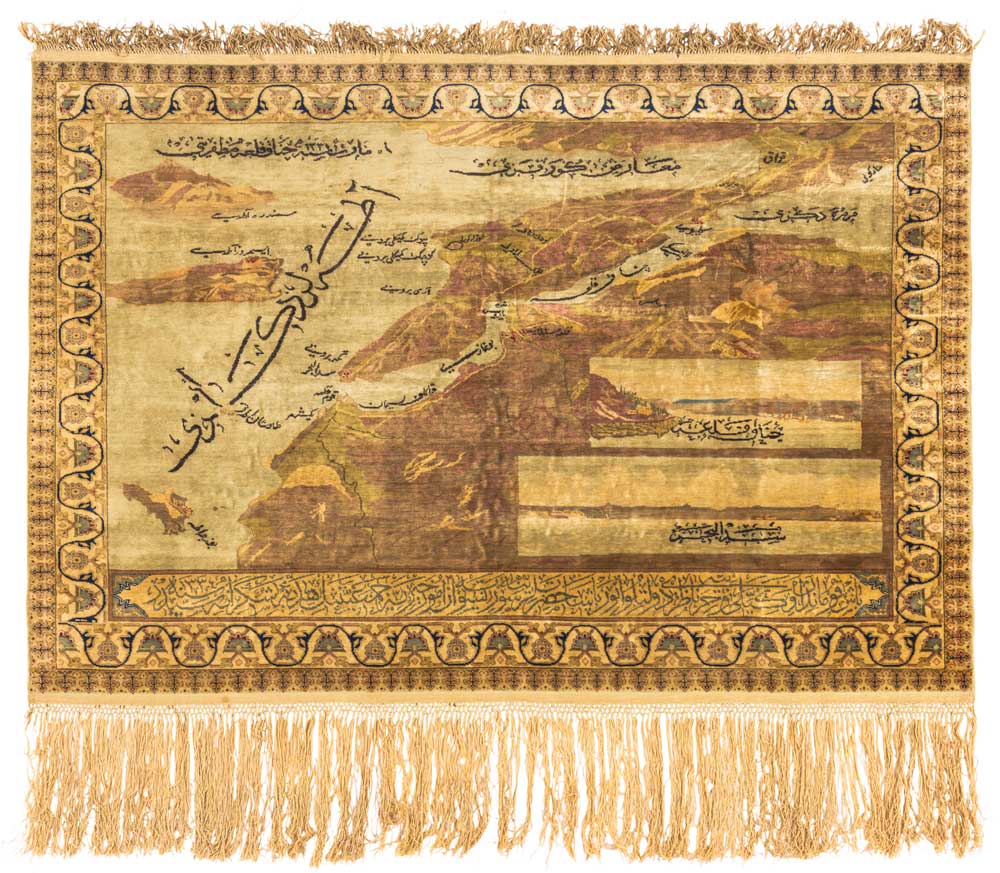 Lot 30. The ‘Gallipoli Rug’. Turkish all-silk, ‘map’ rug, probably Hereke, dated AH 1335 (1916 CE). 98 x 146 cm. This historically significant rug is woven as a detailed map of the battlefield at Gallipoli and is inscribed ‘to commemorate the victory at Çanakkale’. It was woven for Ismail Enver Pasha (1881–1922), one of the leaders of the Young Turk Revolution that overthrew Sultan Abdul Hamid in 1909. As Minister for War, Enver Pasha was the supreme commander of theTurkish forces at the time of the British-led attack on the Gallipoli Peninsula in April, 1915. The ensuing defeat of the British, French and ANZAC troops, was a major victory for Turkey. It is widely acknowledged that Mustafa Kemal Ataturk was responsible for the victory and both he and Enver Pasha were presented with extremely fine silk carpets, most likely woven at the Hereke Imperial Factory, in honour of the event. The rug presented to Ataturk is understood to be in the collection of the Military Museum, Harbiye, Istanbul. Estimate AUS $ 150,000-200,000, sold for AUS $174,600 ($131,650).

Jacques Cadry (1910–2003) was a Persian-born carpet dealer who pioneered the business in Australia. Founded in 1952, the business continues to flourish under the management of the second and third generation. Their landmark building in Sydney’s affluent eastern suburbs has been home to a wide range of antique and decorative carpets over the years, but also housed Jacques’ treasured private collection of pictorial and inscribed rugs, ‘war rugs’ that he started buying in the 1980s, and a good number of rare old Caucasians, Turkmens, tribal flatweaves and Central Asian ikats and embroideries. These he carefully stored separately from his stock-in-trade with the result that they stayed in excellent condition and were mostly unknown to the market.

The highlight of the sale was lot 30, an all-silk Ottoman rug woven with a map of the battlefield at Gallipoli that sold for AUS $174,600 (US $131,650) against an estimate of AUS $150–200,000 – a record for an oriental rug at auction in Australia. Its Ottoman Turkish inscription describes it as a gift made in 1916 to Enver Pasha, the Minister for War, ‘to commemorate the victory at Çannakale (Gallipoli)’. According to the Australian press, its purchase by the Australian War Memorial in Canberra, signals ‘a new era for the collection’ and a more nuanced view of the World War I campaign in the Dardanelles that ended so disastrously for the British, French and ANZAC troops. The rug, which is in excellent condition, had been in Sydney for at least 50 years. Jacques Cadry bought it from a descendent of Enver Pasha, whose only son died in a car accident in 1971 while living in Sydney. 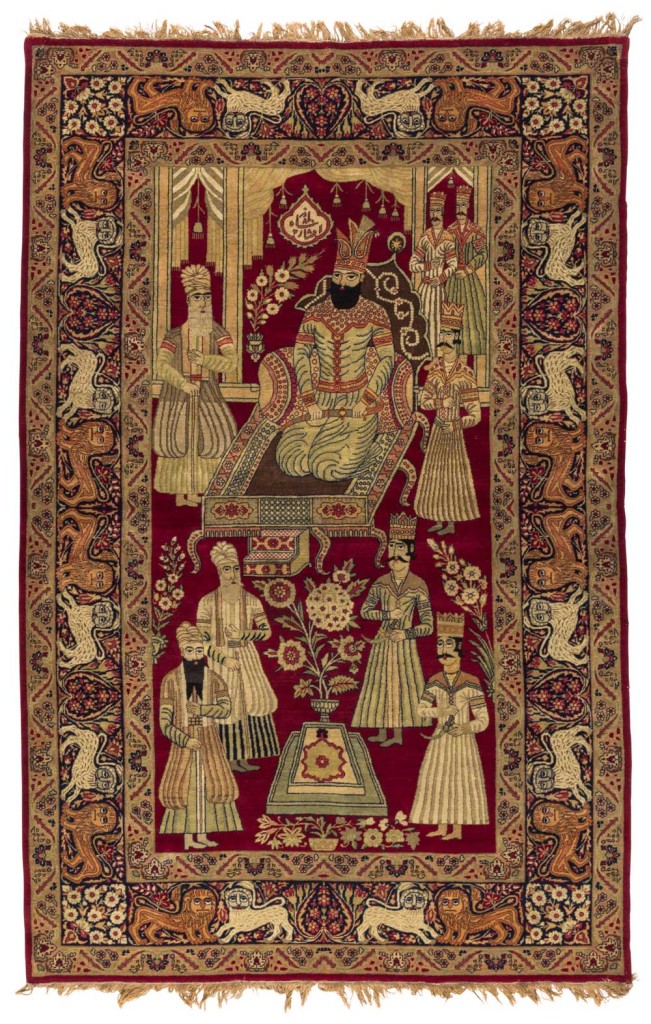 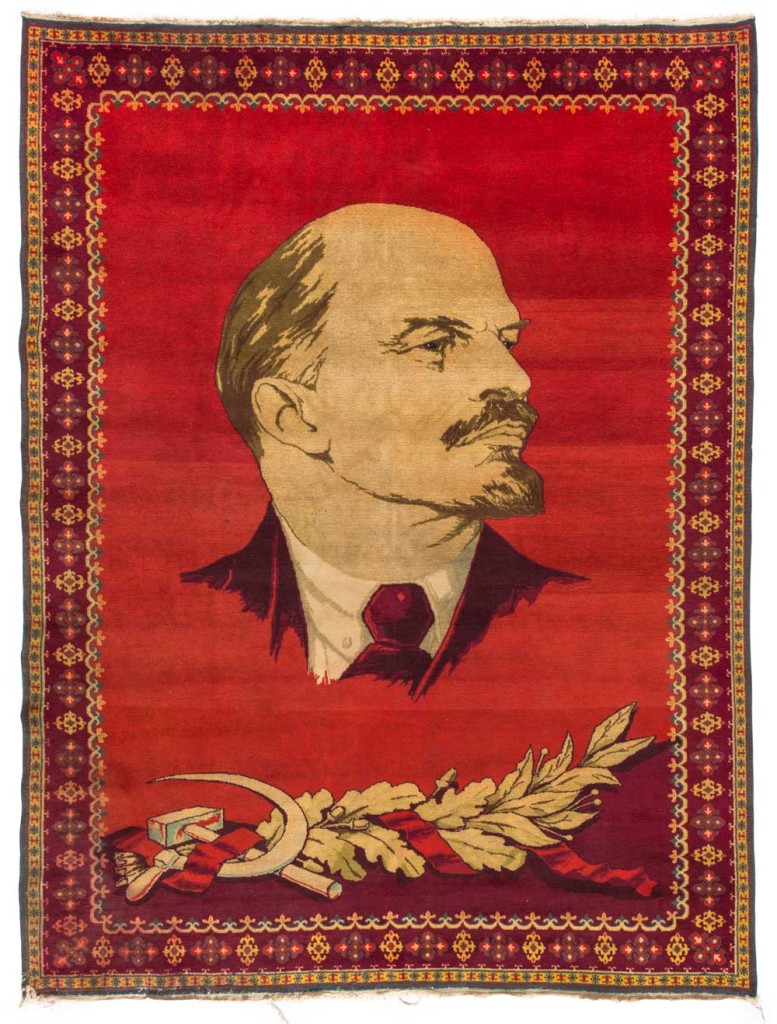 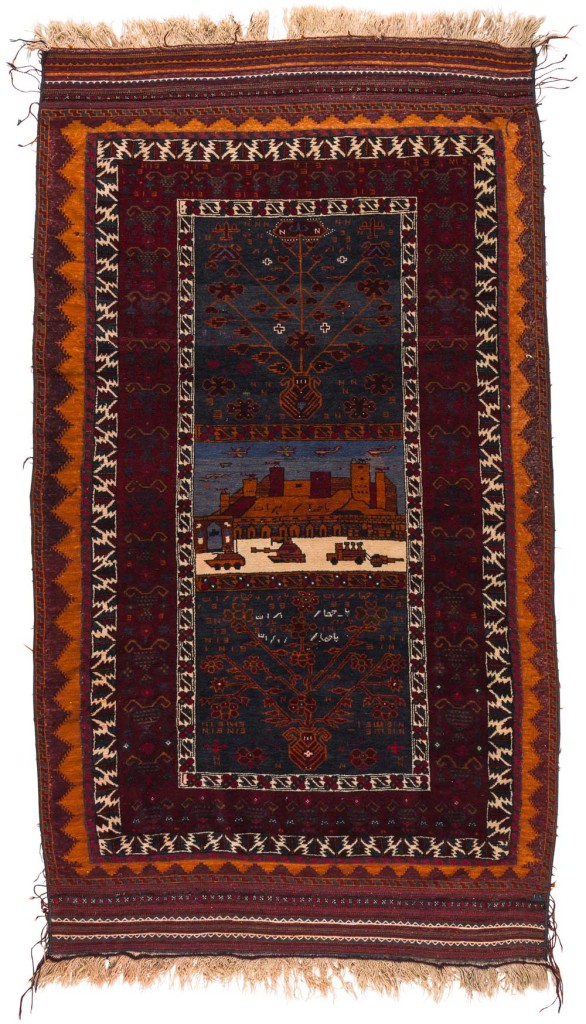 Lot 44. Mushwani Baluch war rug, Afghanistan, late 20th century. 270 x 146 cm. A inscribed ‘war-rug’ with a central image of a pair of tanks and a miltary vehicle in front of a fortress. The upper and lower compartments of the rug contain stylised tree-of-life motifs, with the branches of each emerging from a vase-like form. Estimate AUS $2,500-3,500, sold for AUS $2,728.

The pictorial rugs, an unfamiliar genre to many Australian buyers, started slowly on the day of the sale, although a number were sold straight afterwards, with a striking Karabagh district rug depicting a portrait of Lenin and a well-drawn Kerman rug portraying Nader Shah Afshar (r.1736-47) surrounded by courtiers, fetching AUS $7,440 and AUS $9,920 respectively. An inscribed Baluch war rug, representing a genre that has attracted some interest down under, with typical combinations of traditional forms and the machines of modern warfare, made a mid estimate AUS $2,728. 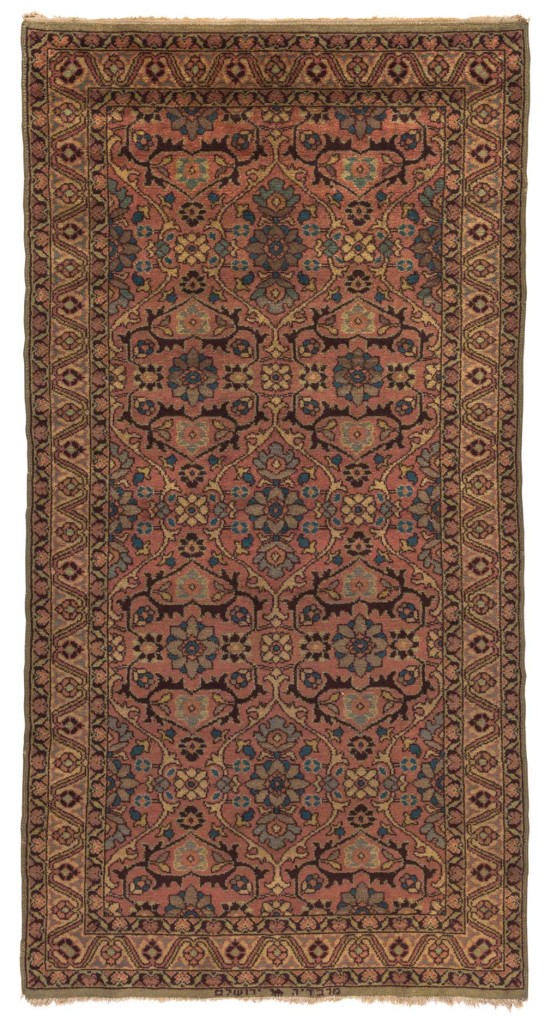 Lot 25. Bezalel School of Art rug, Jerusalem, early 20th century. 229 x 120 cm. An example of the rugs woven at the Bezalel School of Art in Jerusalem between 1906 and 1929, in what was then British-ruled Palestine. The academy had been set up to provide Jewish artists with a place to develop a distinctive style that would combine European traditions with those of the Ottoman Empire, Central Asia, North Africa and Iran. The rug is inscribed with the word ‘Marbadiah’, the name given to the weaving workshop within the academy, and derived from ‘marvard’, the Hebrew word for carpet. This example is woven in the Persian manner, with a repeating design of rosettes, flower-heads and serrated leaves. Estimate AUS $ 10-12,000, sold for AUS $11.160

Lot 84. Baku runner, Azerbaijan, southern Caucasus, 19th century. 417 x 112 cm. This carpet belongs to a group attributed by Latif Kerimov to the village of Fatmaii on the Aspheron Peninsulat. The Cadry runner has three characteristic hexagonal medallions in a field  filled with stylised palmettes and geometric motifs and surrounded by a strong Kufic border. Estimate AUS $20-30,000, sold for AUS $22,320. 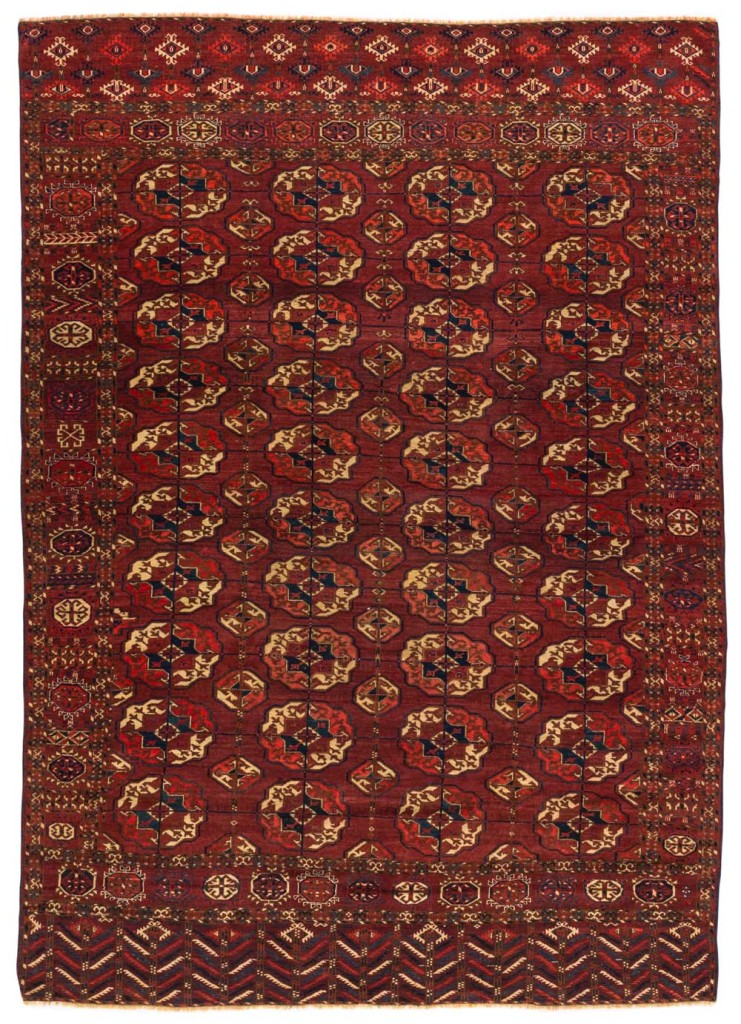 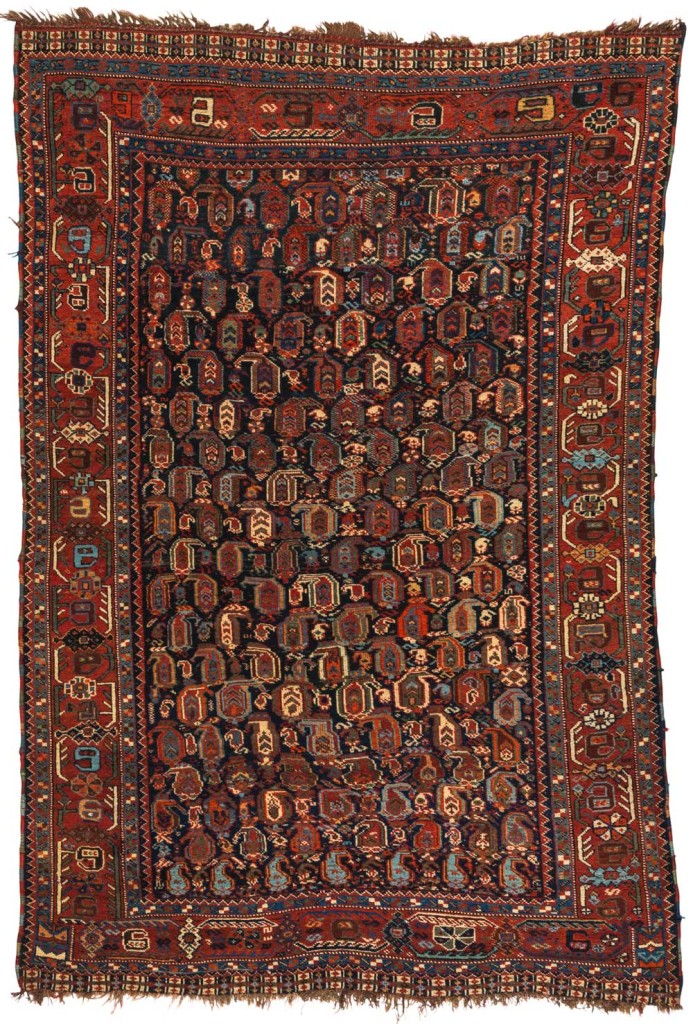 A rare, inscribed, early 20th century Bezalel School of Art rug from Jerusalem and an outstanding Baku runner with a strong Kufic border were sold at the lower end of their estimates, with a handsome Tekke Turkmen in excellent condition, and a lively southwest Persian boteh design rug, catalogued as Afshar, selling at the high end or more. 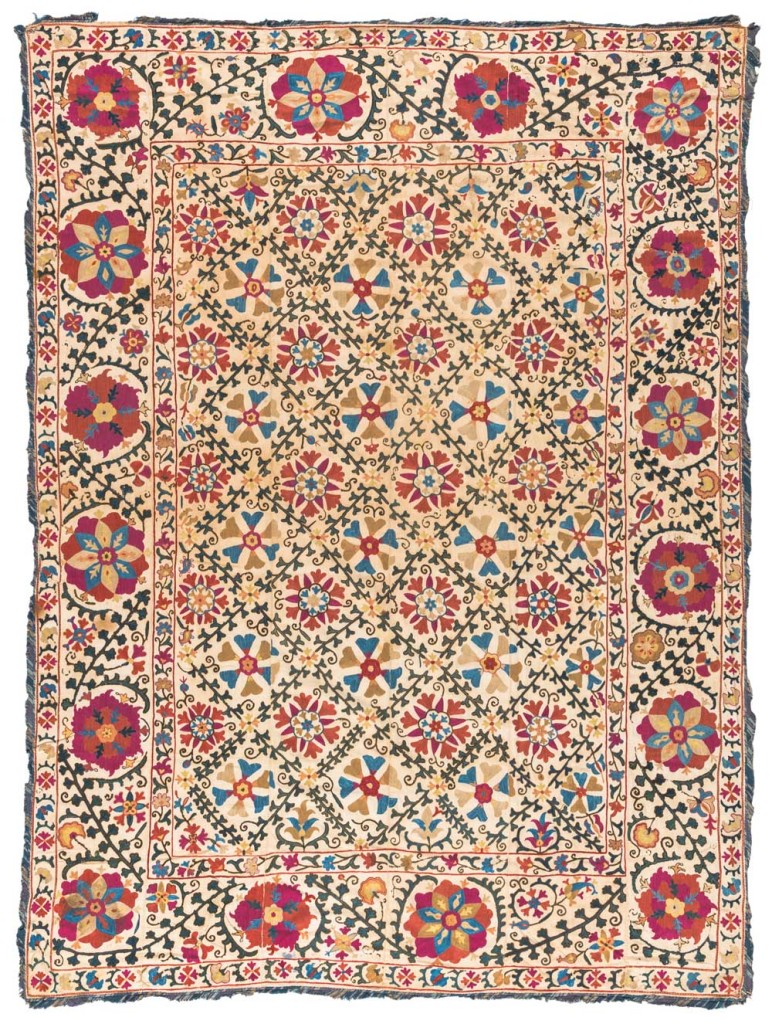 There was spirited bidding for a number of room-sized carpets, some with workshop signatures and all in near-mint condition. A refined and precisely stitched Bukhara suzani, missing its original backing but otherwise pristine, sold for AUS $17,360 and a group of central Asian and Persian robes and other textiles all sold well.