Canopies for the Goddess at Museum Rietberg, Zurich, until 14 April 2014

Helmut Neumann writes: Twenty-seven temple cloths from Gujarat are on show in a special exhibition,  ‘Canopies for the Goddess’, at the Museum Rietberg in Zurich Until 14 April 2014. Made of hand-printed and painted mordant-dyed cotton, the cloths are part of the recent gift of more than 2,000 Indian textiles, mainly from Gujarat, assembled almost half a century ago by Eberhard Fischer, director of the Rietberg Museum from 1972 to 1998. 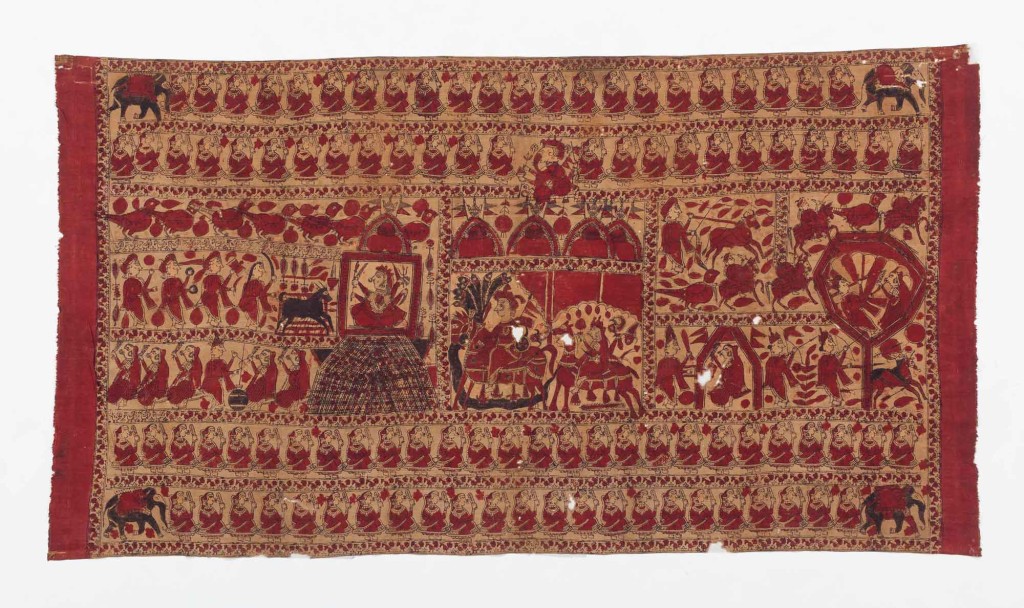 The cloths picture local goddesses surrounded by priests, sacrificial animals, and events relating to the worship of the goddess, as well as scenes from Hindu epics and stories of local heroes. All the goddesses represented here are ferocious virgins, contrasting with the main Hindu goddesses, who are all wives of gods. The cult of the goddesses is of considerable antiquity and might antedate the foundation of the great classical Indian religions. The temple cloths were made by the Vaghi, a community from the lowest layer of society. They and other under-privileged groups used them for ritual purposes. Excluded from the temples of the higher castes, they erected temporary shrines for periodic festivals in which they thanked their goddesses. These were built by suspending the cloths on bamboo poles on a low platform of brick covered by clay. Some cloths formed a baldachin, others the shrine walls, as had been rebuilt in the centre of the exhibition using cloths from the collection. The most important temple cloths in the collection surrounded the shrine, carefully placed within the ideal exhibition architecture for which the Rietberg is renowned. 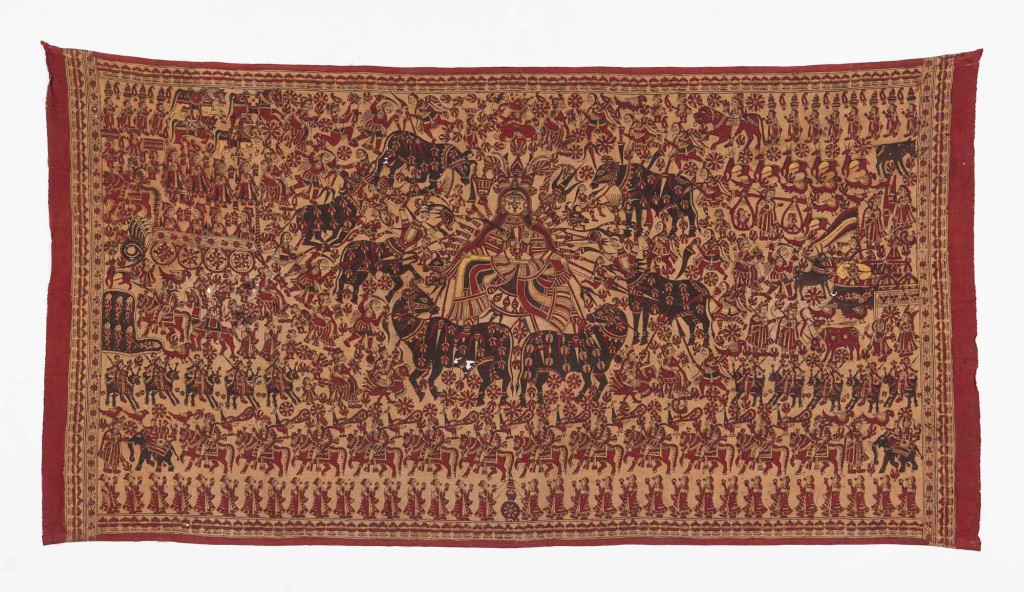 The temple cloths were used in ways not conducive to their survival, and the oldest examples are probably no earlier than the late 19th century. They are, however, embedded in a long tradition. The craft of making colourfast cotton textiles by mordant dyeing was probably first developed in Gujarat. Over many centuries, such cottons were exported in large quantities from Gujarat to the Arab countries and the Eastern Mediterranean in the West, and to other Asian countries in the East, notably the Indonesian Archipelago. (Some four-metre- to five-metre-long mordant-dyed cotton cloths from Gujarat with complex patterns have survived in Indonesia for seven centuries; see HALI 171, 2012, pp.102-3.)

These early mordant-dyed cottons were produced with similar processes to those used for the temple cloths, but in more highly developed, larger workshops, employing similar wooden printing blocks. In this way the Vaghi artisans can be regarded as the descendants of a long tradition of great economic importance for Gujarat over many centuries, comparable to that of the machine-run cotton mills that became their successors.

In Ahmedabad a few Vaghi continue to make new temple cloths. The cotton fabric is first washed in the river to remove the starch and other substances used in the production process. Black colourant is obtained by dissolving scrap iron in acidic fermenting molasses – a process taking several weeks. This ‘black water’ is mixed with tamarind flour and nowadays is strengthened by the addition of iron sulphate. The resulting black ink-dye provides both the black colourant and the mordant needed to fix it to the cotton cloth. It is soaked up in an ink-pad into which the Vaghi artisan presses the wooden printing blocks for stamping the textile. Many printing blocks are needed for the outlines of all figures and ornamental designs. Some black details are added by hand.

The two-step dyeing of the red colour follows. It starts with the application of the mordant (made of tamarind flour and alum) to those areas that will appear red. The dyeing is then done by immersing the cloth in a hot bath of alizarin, or madder in the case of the earliest surviving temple cloths. 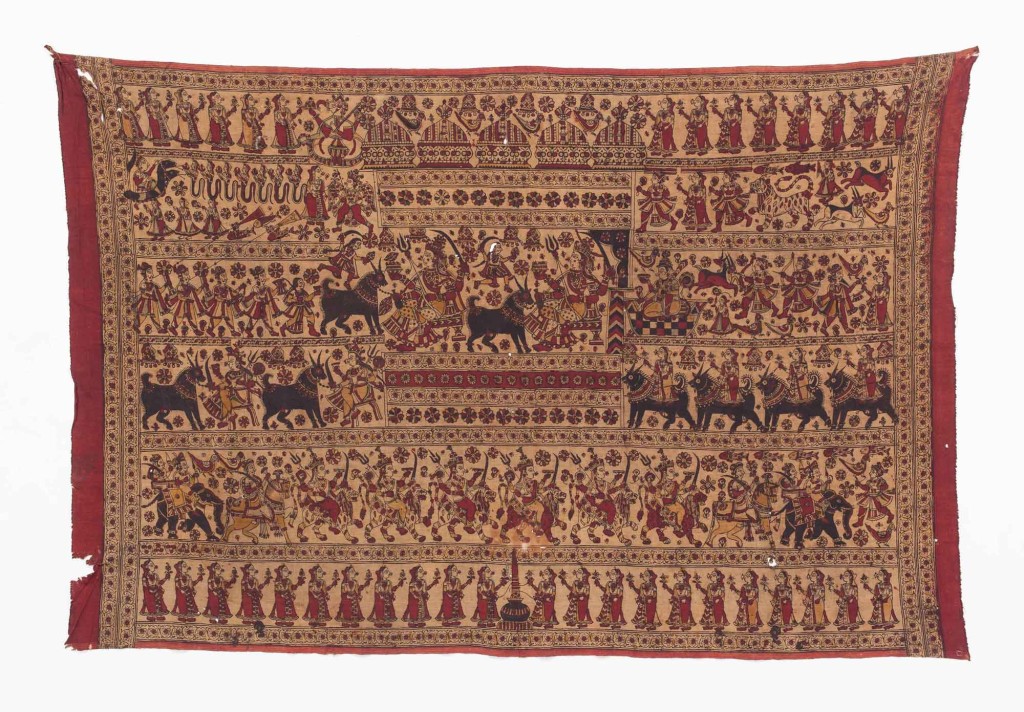 Most temple cloths show a goddess in the centre, surrounded by a variety of figures in horizontal rows. A typical example shows the goddess Meladi within an arched shrine, riding on a black male goat, and confronted by two sacrificial black goats and two priests with raised swords   They are followed by a group of six musicians. On the opposite side of the shrine, a third sacrificial goat faces the goddess Sikotar (in the boat) and four other goddesses (on their animal vehicles). Well-known mythological or legendary figures are depicted on the row directly below, for example the double-headed deer hunted by Rama and Lakshmana in a popular scene from the Ramayana. The unbroken panels above and below the shrine are each filled by identical or similar figures: crowned women carrying sacrificial pots, riders wearing turbans, altogether a procession honouring the goddess. 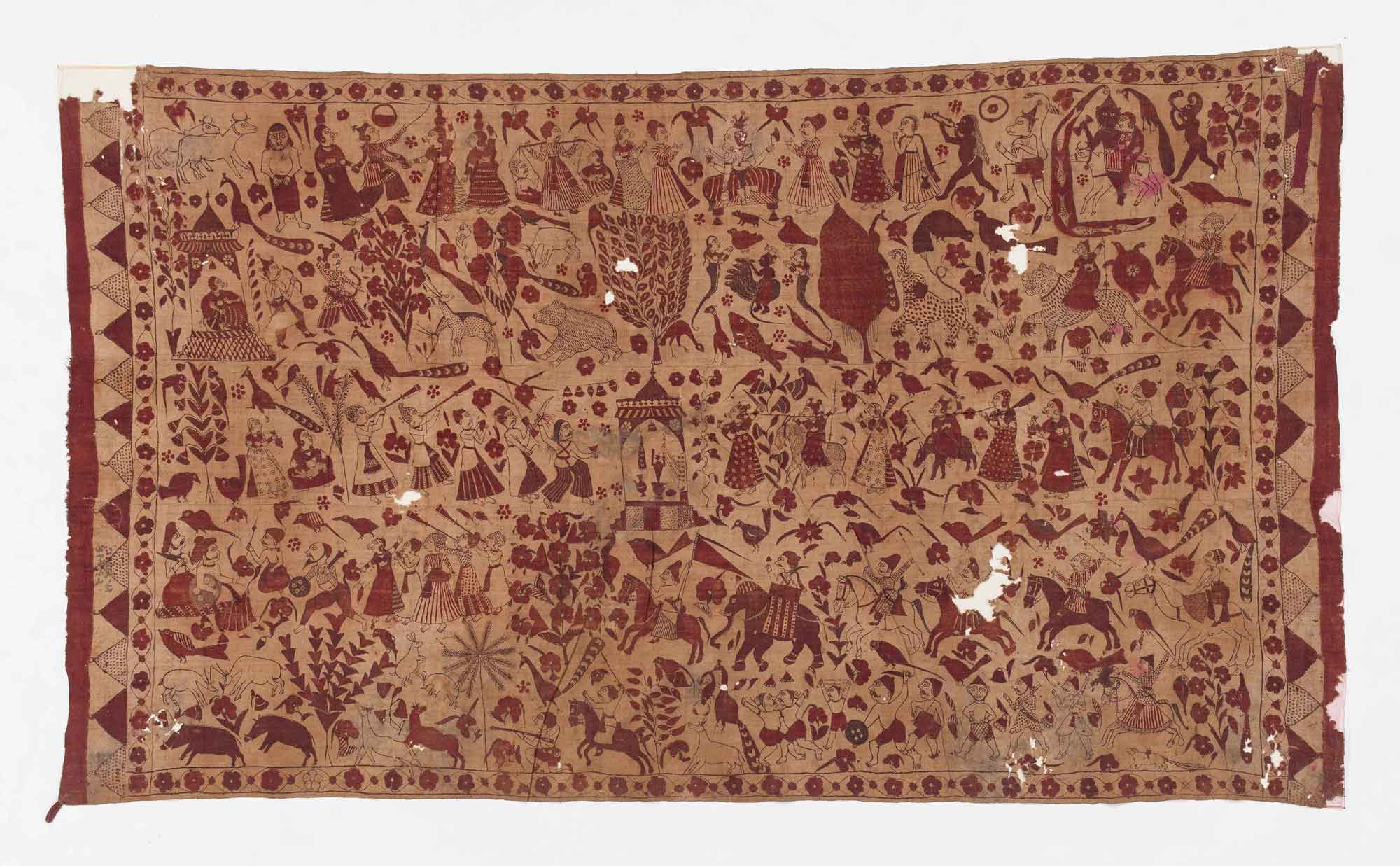 One extraordinary, possibly even 18th century, example is entirely hand-painted: the details are in the tradition of the best folk art from Gujarat, with whimsical expressions and minute care in the execution. A wide variety of figures and scenes from local and pan-Indian stories and epics populate this well-balanced composition. 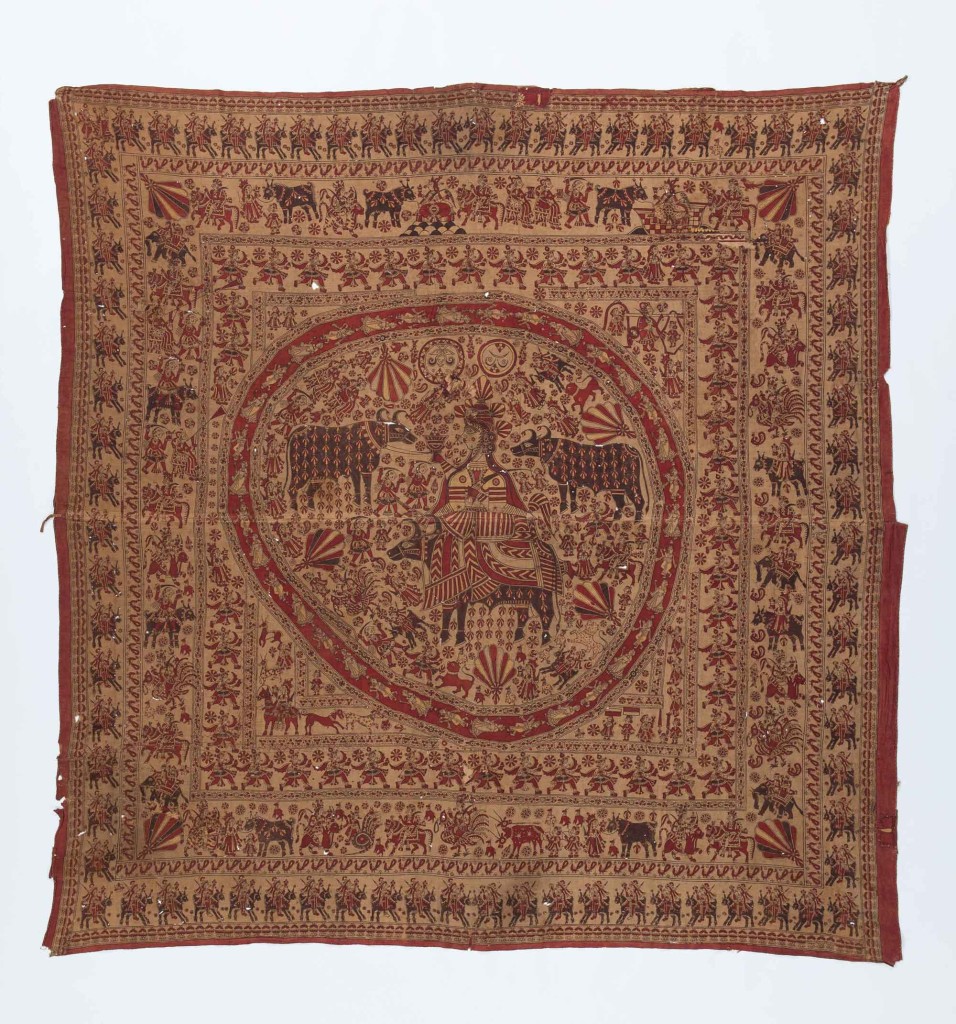 On a splendid cloth in a much rarer square format, three richly adorned buffaloes surround the goddess Khodiya, who kneels on one of them, holding a second on a leash. Priests brandish swords above their heads, pointing to the fate of the buffaloes. The broad irregular red rim of the roundel contains images of a milkmaid, and Krishna playing a flute. The main band around central composition shows the greatest variety, with other important goddesses seated on their mounts, priests and sacrificial animals, as well as the double-headed deer from the Ramayana. 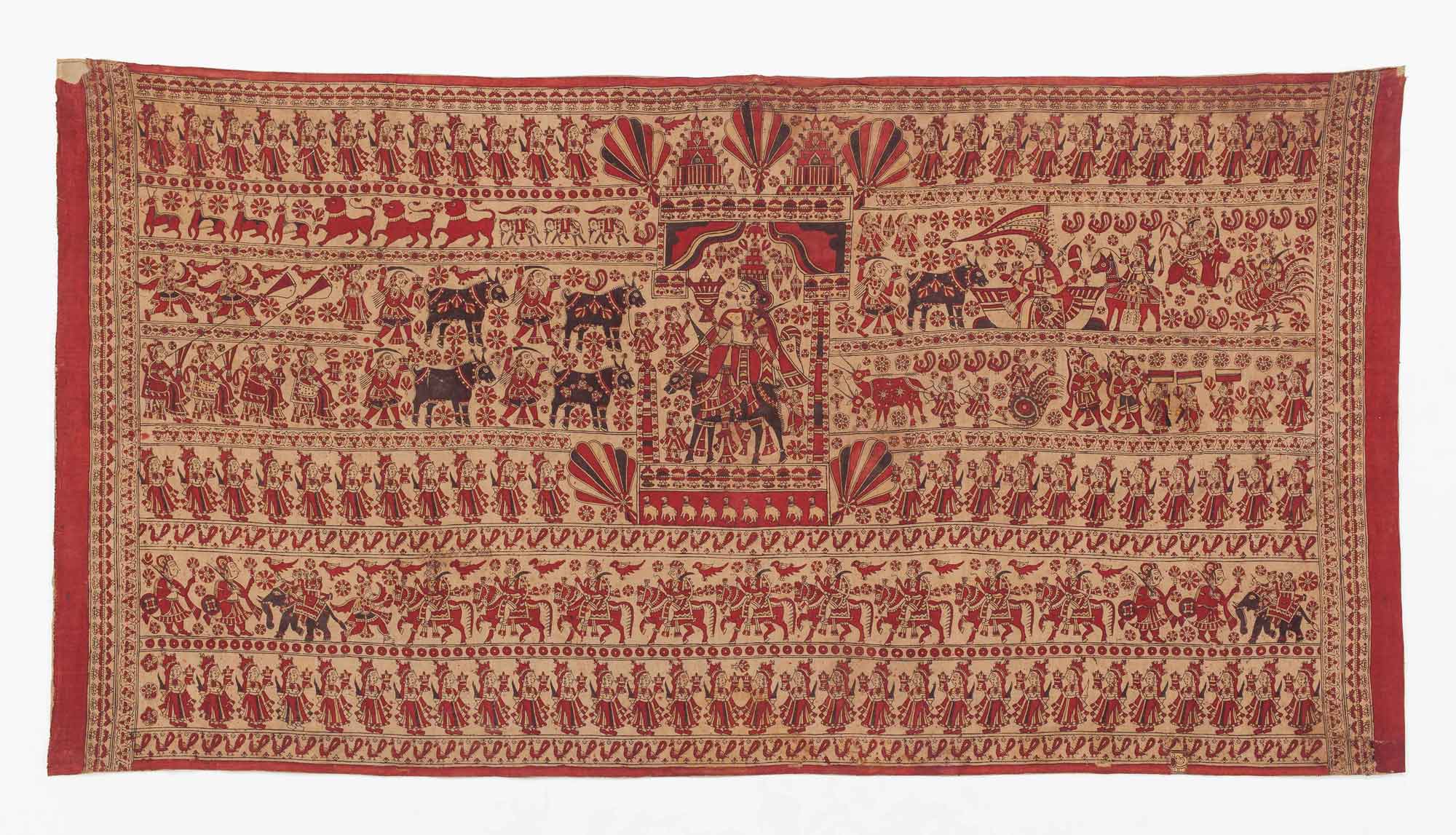 A book, Temple Tents for Goddesses in Gujarat, edited by Eberhard Fischer, with texts by Fischer, Jyotindra Jain and Haku Shah, was published to coincide with the exhibition. Available in English and Grman language editions, it is not only a catalogue describing each temple cloth in detail, but a monograph comprising the extensive research done by the authors on all aspects of the manufacture and ritual use of these remarkable textiles. 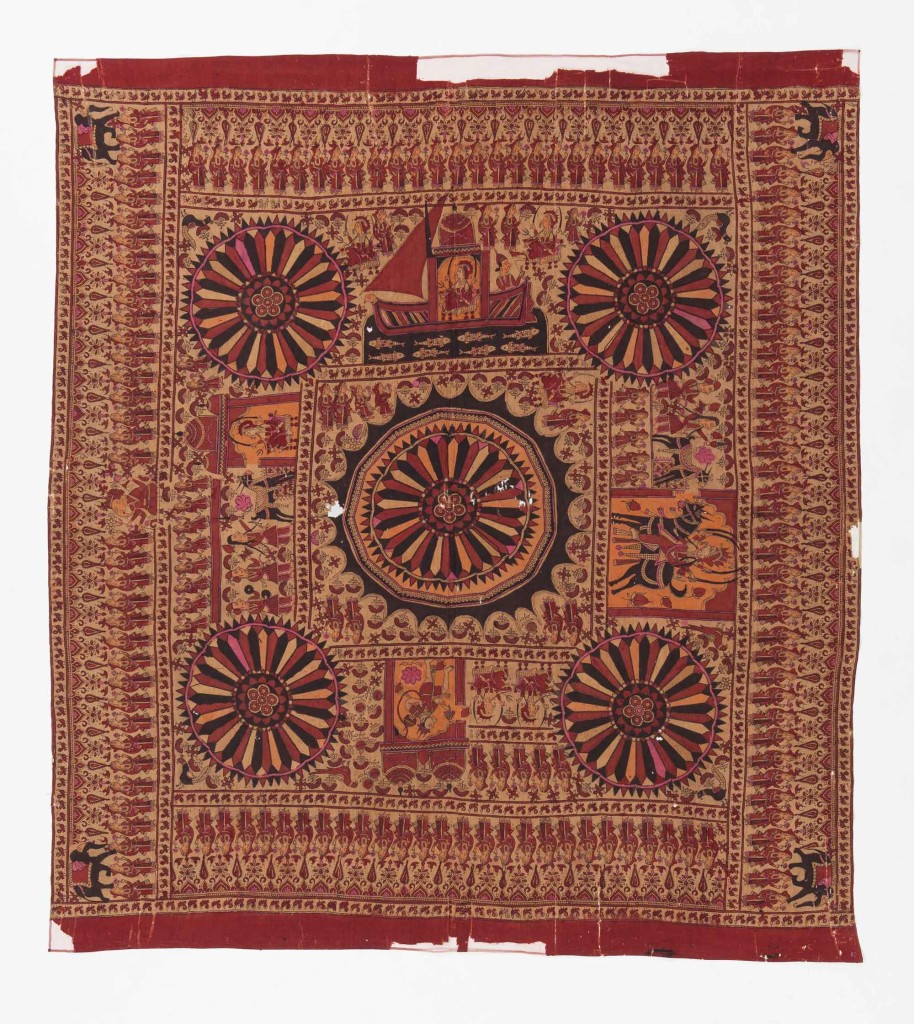