London-based gallery Francesca Galloway, renowned for its Indian art and textile expertise, has partnered with New York art gallery Luhring Augustine to present ‘Court, Epic, Spirit: Indian Art 15th-19th Century’. The exhibition will take place at Luhring Augustine Tribeca in New York until 24 March 2022 and is accompanied by a catalogue. The show features some truly outstanding examples of Indian painting from different periods, but our focus here shall be the three textiles illustrated in the HALI 210 exhibition preview.

An obvious starting point is the velvet floorspread (below) with a medallion pattern. Velvet was the most admired of Indian textiles, and costly due to its labour-intensive nature and materials, with the finest silk being the fibre of choice. In the catalogue essay, Daniel Walker points to a Persian influence in the pile-warp substitution, a velvet technique where extra colours can be substituted as pile that is associated with Iran. The naturalistic style, palette and floral elements are, however, taken from a distinctly Indian textile vocabulary. The floorspread forms part of a group of closely related textiles, of which it is the largest of five. These are all velvets with pilewarp substitution and similar designs and palettes (typically consisting of five colours with a red ground). The group is traditionally attributed to Gujarat and the second half of the second century, but Walker proposes that the looser drawing and greater stylisation of this piece may mean a different weaving centre within Gujarat or a slightly later date. While the exact circumstances of its making may never be revealed, this sumptuous textile is testament to the wealth and refinement of the Mughal court. 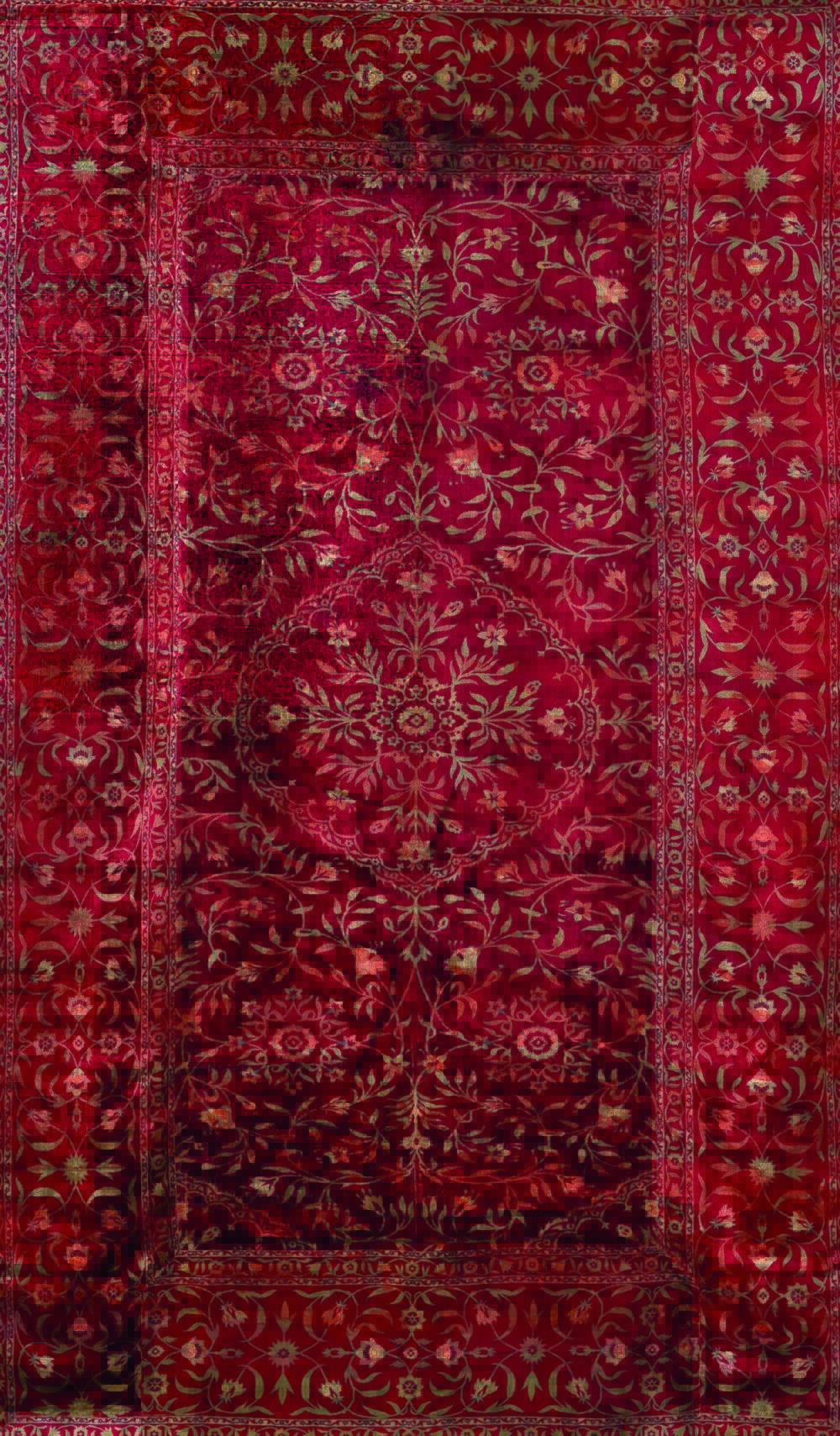 Much of a Mughal emperor’s life was spent on the road, travelling the great expanse of the empire. This called for vast royal encampments to function as mobile seats of power, no less splendid than a solid palace. These took the form of suites of tents, often arranged in a manner similar to a palace complex. Francesca Galloway’s qanat panel is part of a series of niches which would have lined the interior of a royal tent. The arches are filled with exquisitely drawn motifs including peacocks and birds of prey attacking a deer. This masterly ‘painted cotton’ or kalamkari has a pair in the Calico Museum of Textiles in Ahmedabad, and shares elements with textiles in other collections, some of which exhibit South Indian heraldic motifs. It is part of the group that Rahul Jain believes comes from the Jaipur Palace storerooms. 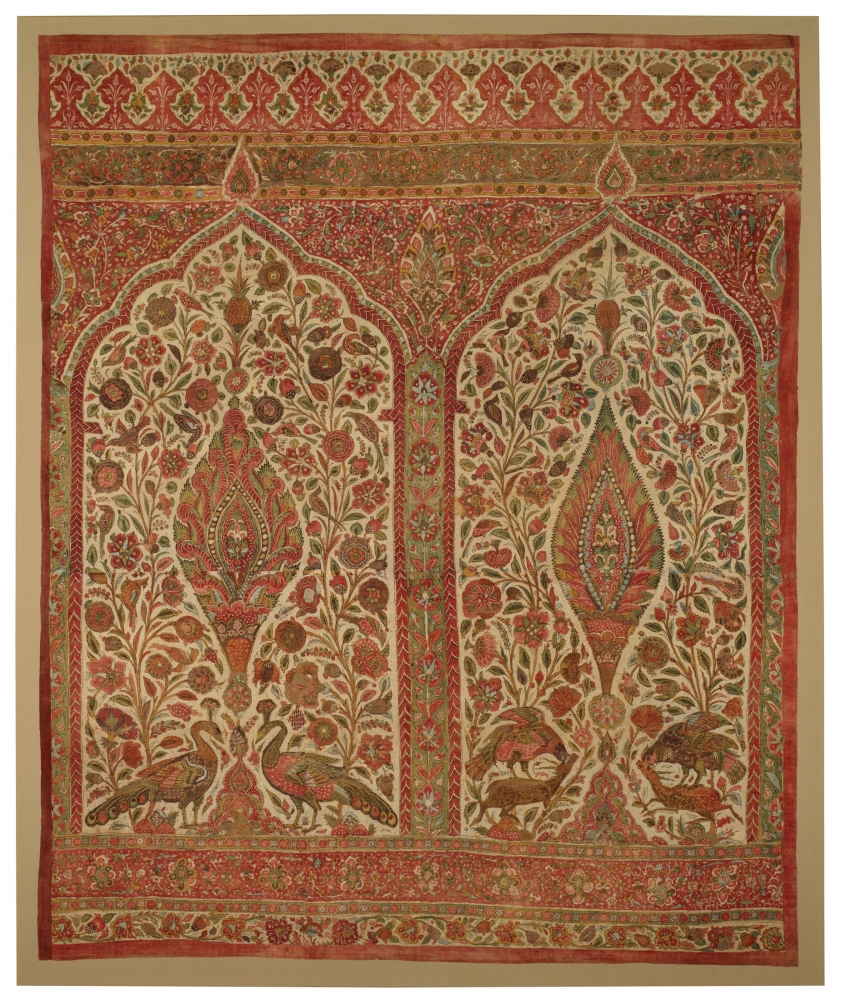 A third textile highlight is a pichvai, a temple cloth that is an essential attribute of Pushti marg worship, centering on the youthful Krishna. In this cloth, Krishna tips curds from a pot carried by a gopi, who together with four companions is on her way to the market. This story— Krishna demanding milk from the gopis as a toll for safe passage—underpins the festival of Dana Lila, which takes place in August-September. While most pichvais were made in Gujarat and Rajasthan, some examples with a red or indigo blue ground, such as this one, are believed to have been made in the Deccan, where followers of Pushti marg had settled in the early 18th century. The date for this pichvai is thought to be later (mid-19th century) due to the presence of copper acetate arsenite, a pigment invented in Europe in 1814 and in wide use in the decades that followed. While the textile discussed above is a ‘painted cotton’, this is a true painting on cloth. Seeing them displayed alongside examples of Indian paintings on paper is an interesting exercise sure to yield new insights. 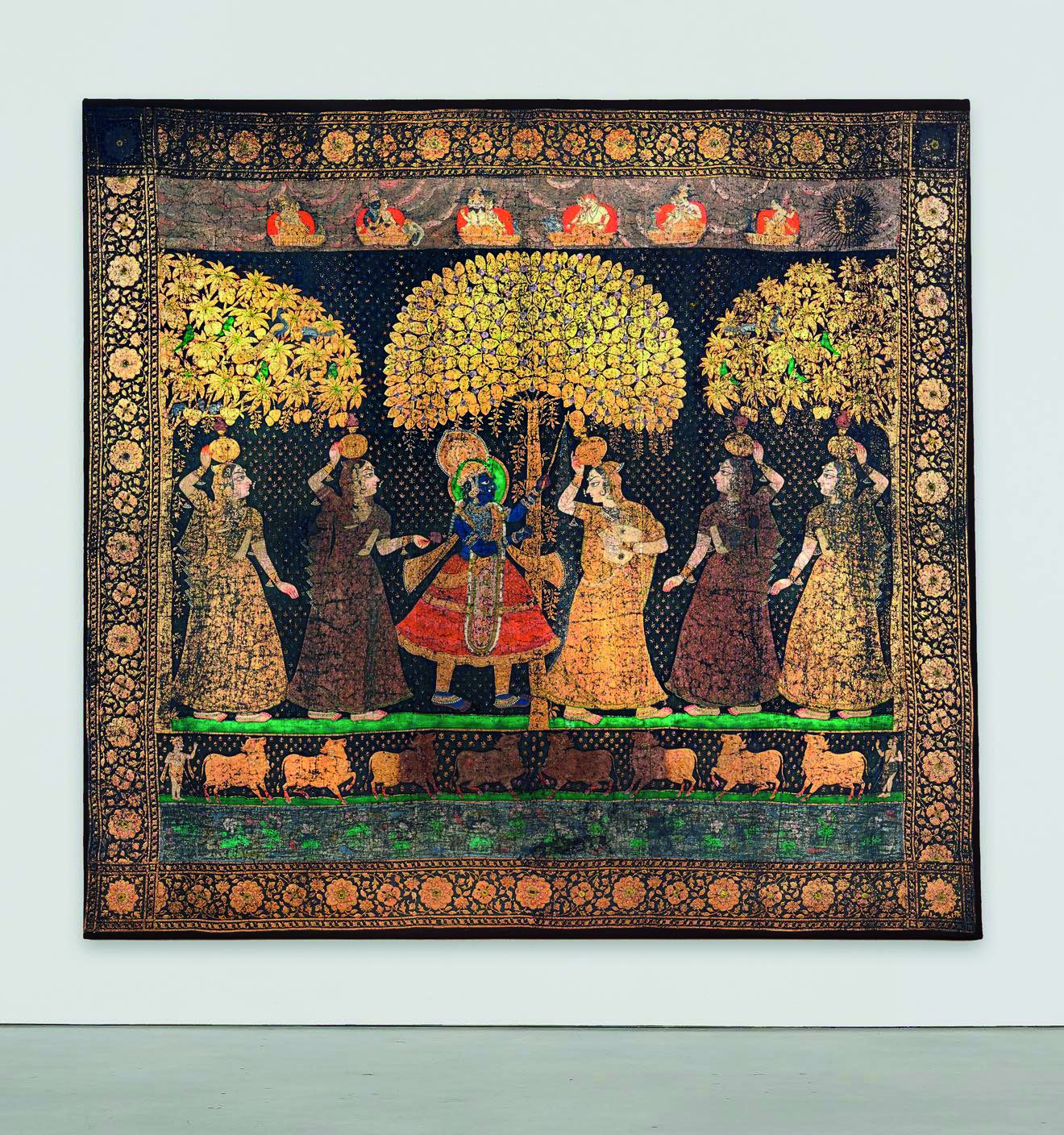