On Thursday 24 May 2018, Sotheby’s in New York will offer some 180 works of 20th-century European and American design, both pre- and post-World War II, in a sale titled ‘Important Design’.

Featuring works by a glittering roll call of leading international designers, the pre-war selection includes five important clerestory windows from Frank Lloyd Wright’s Avery Coonley Playhouse, masterworks by the Scottish Arts and Crafts silversmith Archibald Knox from a Manx collection, and a section dedicated to the leaded glass works of Tiffany Studios, as well as one carpet of appropriate period and pedigree. 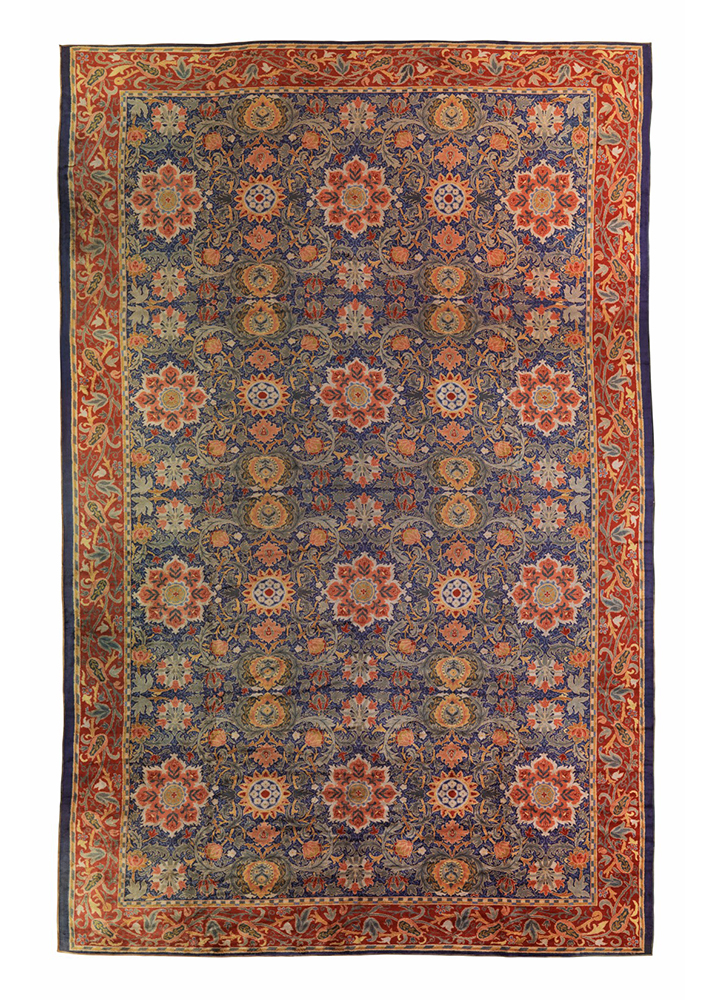 Produced by Morris & Co. Art-Workers Ltd., London, lot 393 is an outsize mid-1930s version of the McCulloch ‘Hammersmith’ carpet, originally designed circa 1900-1902 for the London (Queensgate) home of the successful Australian mining engineer George McCulloch by John Henry Dearle, which sold in 1989 for a then world record price (long surpassed) of $133,960 (HALI 71, p.161). The present carpet, which measures 5.80 x 9.30 m and shows a multiple repeat of the original design, appears to be in very good overall condition, with a number of isolated instances of restoration or minor damage. It is estimated at $30,000-50,000.

The Dearle pattern, which was a popular one, was woven for a number of years and produced both as hand-knotted and Patent Axminster carpets. A number of Axminsters of this design were used in two large public buildings in London and Melbourne in the 1920s and 1930s, and this carpet probably came from one of these commissions. A carpet with the same repeated design unit and of exactly the same width, but almost half as long again (5.80 x 13.10 m), was commissioned for the Court Room at the Drapers’ Hall in London in 1934 and was subsequently sold by Christie’s in London on 5 May 1995, lot 21, for £58,700.