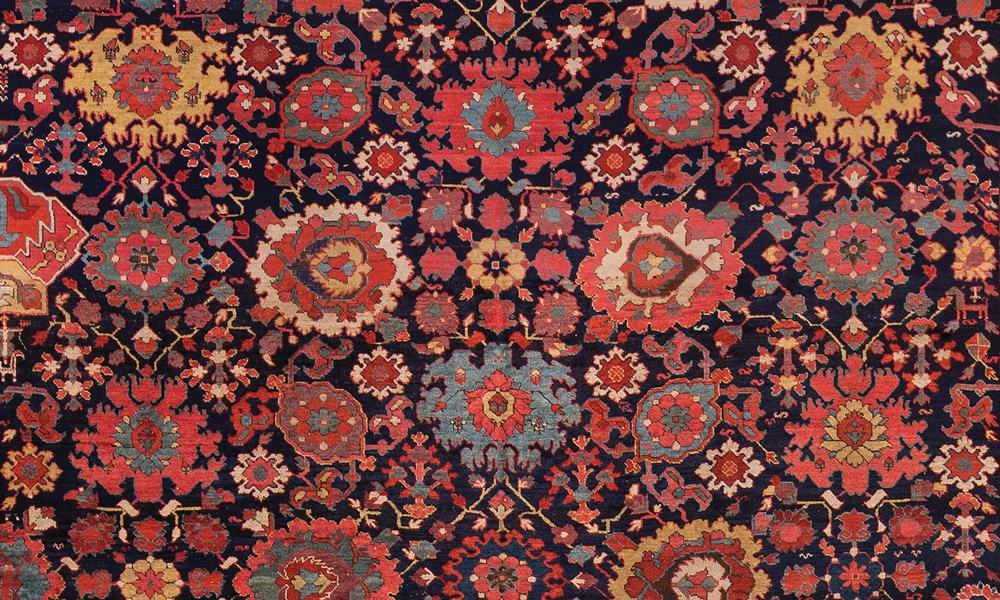 Working with Hadi Maktabi to find the best images for his newly published book The Persian Carpet: The Forgotten Years 1722-1872 meant full immersion in certain rug types, one of which was the harshang group. The book’s text charts the course of the design’s development and subsequent degeneration, and its possible relation to Kerman vase carpets. The earliest examples come from Khorasan and are woven with jufti knots and have a more densely-packed ground. It is arguably not until the harshang carpets woven in west and northwest Persia, typically on dark blue grounds, that we find the pattern in its best expression.

Once belonging to Dennis and Zinaida Dodds (Oriental Rugs from Atlantic Collections, 1996, no.83) and now in a private collection, this is a ruggie’s carpet. A wise old rug man once told me that great rugs reflect a perfect moment in creativity where all the elements come together perfectly, as is the case in any other form of human artistic expression.

To my eye, here the material quality, the knotting density, and the colour composition are exceptional, but above all it it is the colour and wool that make it such a treat: they have the particular warmth and softness associated with Kurdish weaving of Sauj Bulag, a label also suggested by the minor guard border, but one that Maktabi suggests is used with much licence but little material foundation.

Compared to the great McMullan harshang carpet in The Met (68.219), it appears to be one step away from the latter’s more classical drawing, and its width allows for two extra horizontal pattern repeats, giving one of the broadest views of the pattern repeat in rugs of this age and provenance—a larger canvas on which to display the great colour variations. The field is also a useful tool for clearly showing design elements that would later become the staple of northwest Persian and Caucasian rugs. Within the context of the book, it is also a glimpse into a period, the 18th and early 19th centuries, that have been forgotten for too long and which Maktabi argues were formative in the transition to the later 19th-century carpet boom.