Embroidered Americana Set to Make a Million in Boston

Skinner’s Boston sale of  ‘American Furniture and Decorative Arts’ on 1 March 2015 (with live online bidding through Bidsquare) features a highly important example of early American needlework that is expected to sell for a sum in the region of $1million.

Lot 30, The Phillips Family Needlework Picture, worked in wool and silver and gold metallic threads on a linen ground, is one of just a handful of 17th century American pictorial embroideries known, its Tree of Life design closely following English style. Preserved in the Phillips family for more than three centuries, it has a well-documented provenance. Sarah Phillips (1656-1707) was a daughter of Reverend Samuel Phillips (1625-1696) who came from England to America in 1630 on the ship Arbella, to settle in Watertown, Massachusetts. Sarah was reportedly educated at a private school in Boston where she probably stitched her needlepoint picture in the late 1660s or early 1670s. In 1939 it was lent to the Boston Museum of Fine Arts where it was documented and remounted by the museum’s textiles department. It was subsequently exhibited at the museum during the winters of 1945 and 1946. Estimate $800,000–$1,200,000 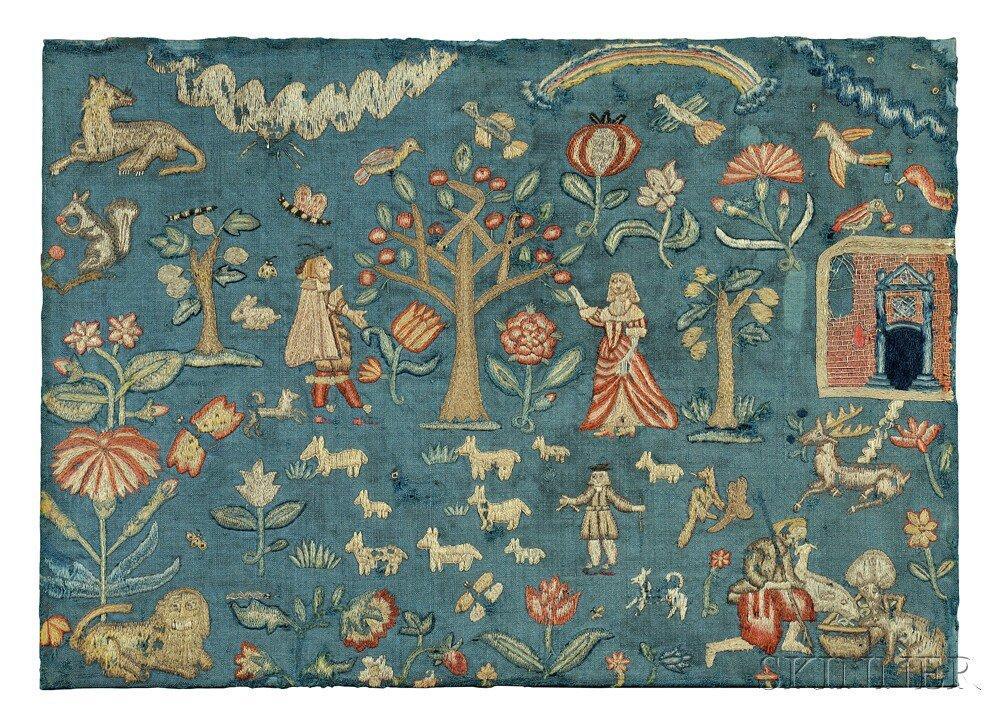 In addition to the customary small selection of needlework samplers, hooked rugs and quilts, interesting textile items in the Boston sale include lot 1, a yarn-sewn rug, by Sarah Colburn of Lowell, Massachusetts, dated 1836,depicting a central spread eagle with the symbolic paraphernalia of the United States. Like the needlework picture, the rug is consigned for sale by the family of the maker. Estimate $6,000-8,000 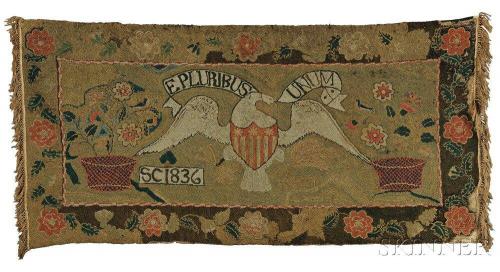 Lot 37 is an English appliquéd textile fragment from the first half of the 18th century, intricately decorated with a central basket with emerging flowers, the leaves and petals of which are cut from individual swatches of dyed plain weave broadcloth stitched to a thin twill-woven woollen backing. According to the consignor it was purchased in the 1990s at the sale of the contents of Kitley House near Plymouth in Devon, home the to the Pollexfen Bastard family since the 16th century. The textile was found in one of the attics when the auctioneers were clearing the house prior to sale. Estimate $1,500-2,500. 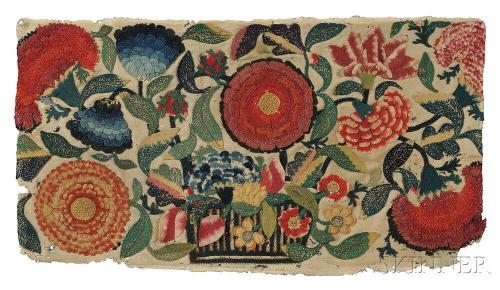 Finally, a curiosity, lot 174, one of the hooked rugs, made in the early 20th century with a pattern based on a 19th century Caucasian rug. Estimate $400-600 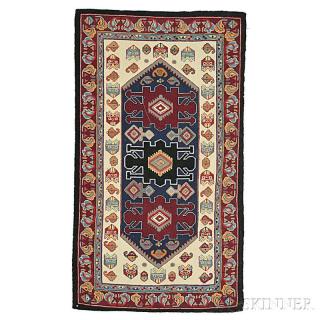