Exhibition Review: Look at the Rugs—Find Me

To celebrate the jubilee of Swedish carpet designer Märta Måås-Fjetterström, King Carl XVI Gustaf of Sweden initiated an exhibition of her life’s work. ‘Look at the Rugs—Find Me’ at the Royal Palace in Stockholm, 1 July–4 October 2020, has now reopened for booked visits only. In HALI 204, Anette Granlund reviews the exhibition.

One hundred years ago last year, the highly regarded Swedish carpet designer Märta Måås-Fjetterström started her atelier in Båstad, a small, pretty coastal town on the Bjäre peninsula, where Sweden nudges closest to Denmark. To celebrate this jubilee King Carl XVI Gustaf of Sweden initiated an exhibition of her life’s work. In his opening speech the monarch stated that, whenever he visited his grandfather King Gustaf VI Adolf at his official residences, he would see several rugs bought from Märta Måås-Fjetterström’s workshop. It was on these carpets that the young prince played with his toys. ‘I remember how the rooms felt both modern and cosy,’ the king said. ‘The rugs are part of my family’s history, but also part of Swedish design history.’ 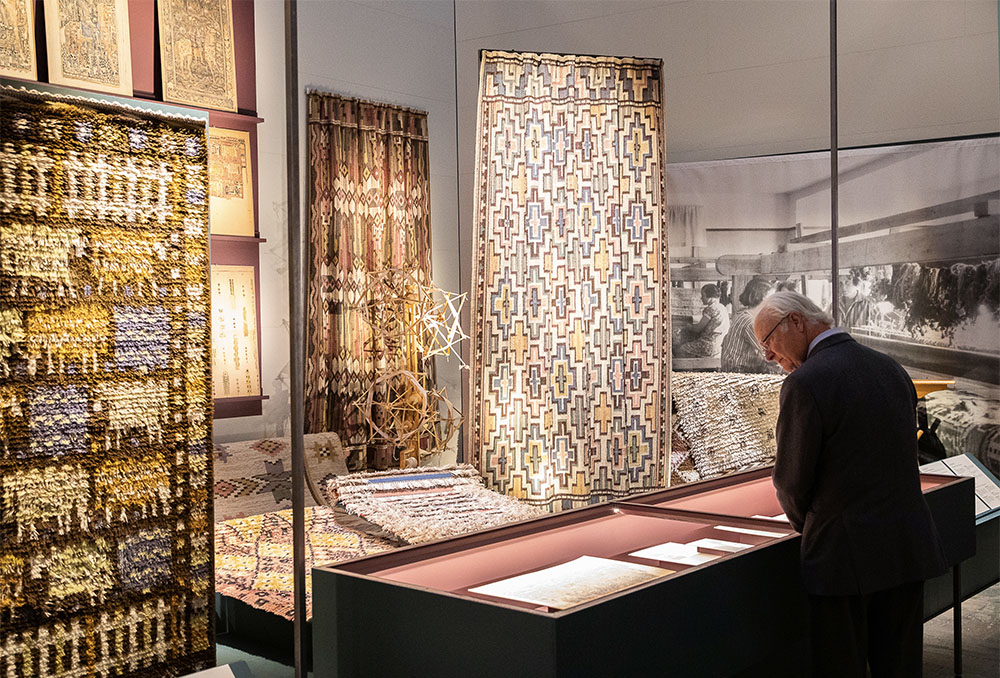 Within the Royal Palace, the 18th-century Hall of State forms an elegant frame to the restrained aesthetics of Måås-Fjetterström’s carpets and textiles. Visitors are met by a 46-square-metre Vita Spetsporten carpet on which the Swedish Queen Kristina’s silver throne from Augsburg (ca . 1650) is placed. This carpet is new, but the pattern was designed in 1934 for an exhibition in Stockholm. The pattern has been popular, and one was presented to Queen Elizabeth II on her visit to Stockholm in 1956. The technique is knotted pile in relief.

Märta Måås-Fjetterström (1873– 1941) was one of eight siblings born in the countryside of Sweden. Their father became a vicar and their mother loved flowers and music. Märta Måås-Fjetterström (MMF) was very fond of drawing and wanted to become an illustrator. In 1890 she applied to the School of Industrial Arts in Stockholm to train as a drawing teacher. Upon leaving school, she began a career in her chosen profession. During this period she also designed several cartoons for tapestries for the Kulturen School of Textiles in Lund.

In 1897 MMF visited the General Art and Industrial Exposition of Stockholm, where she was impressed by the orientalist Fredrik Martin’s pavilion, featuring carpets and other artefacts. Many of her later designs took their inspiration from such works. 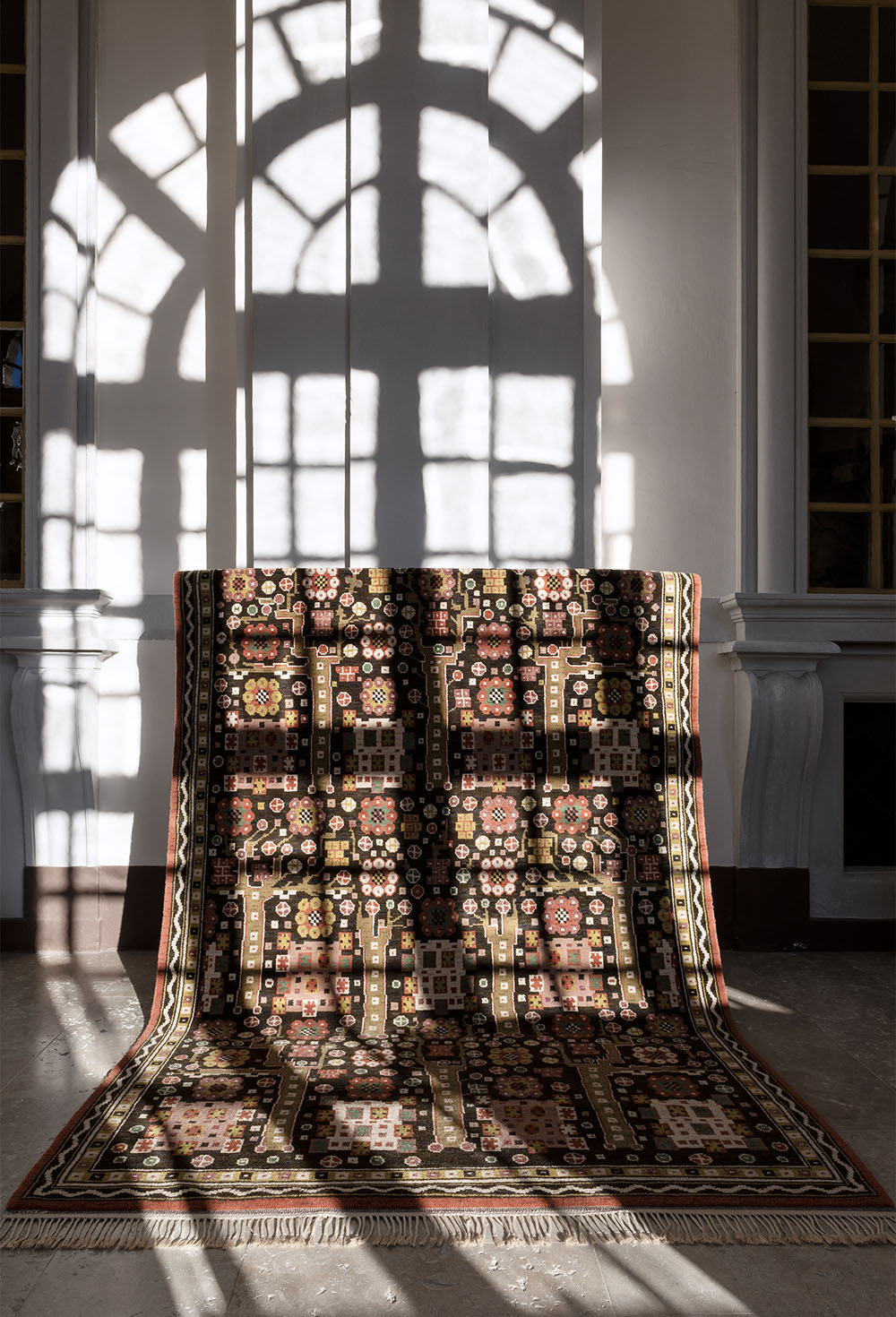 Svarta Trädgårdsmattan, designed in 1923, is often referred to as one of Måås-Fjetterström’s masterpieces. The design was inspired by the ancient oaks in her childhood garden, but also has clear influences from traditional Persian carpets. © Kungl. Hovstaterna, photo: Sanna Argus Tirén/royalpalaces.se

Years participating in numerous exhibitions in Sweden and abroad took her to the Baltic Exhibition in Malmö in 1914. That led to her decision to move and to start an atelier/workshop in Båstad, where she lived for the rest of her life. A master of textile patterns, MMF constantly evolved and reinvented herself. Her early compositions Staffan Stalledräng and Enhörningen evoke renaissance tapestries and Gudbrandsdalen’s 17th-century Norwegian woven tapestries. The rural patterns of Bäckahästen, and Ängarna and Svarta/ Röda Trädgårdsmattan are instead inspired by Persian garden carpets. After the 1930 Stockholm Exhibition, Märta Måås-Fjetterström created simplified, minimalistic and almost functionalist patterns in the carpets Bruna heden and Rutig halvflossa.

The exhibition ‘Look at the Rugs—Find Me’ comprises fifty-seven carpets and textiles of which eleven belong to the king. It is a spectacular and informative exhibition that not only shows the artistic development of MMF but also the development of Swedish and international design and art movements during the first half of the 20th century. Also capturing attention are some watercolour sketches, vintage photographs and important documents.

The first textile on exhibition is a tapestry, Höga Visan (Song of Songs), from 1901, with a medieval European character. Beside it hangs Hjorthagen, a carpet from 1913–14 which shows MMF’s fascination for animals and their movements. In the border you can discern the influence of eastern carpets.

We next focus on the artist’s travels, projects for important buildings, ships and world’s fairs, and commissions for churches and private families. She took part in among others the 1923 Gothenburg Tercentennial Jubilee Exposition (showing Hästhagen and Röda trädgårdsmattan); the 1925 International Exhibition of Modern Decorative and Industrial Arts in Paris (Kungsljus); the 1934 Liljevalchs Exhibition where she received rave reviews (Vita Spetsporten); in 1937 at the Metropolitan Museum in New York (Eken); and in the 1939 World’s Fair in New York (Blåplump). In 1931 the renowned Swedish furniture designer Carl Malmsten was commissioned to furnish a number of rooms at the Waldorf Astoria in New York. MMF was asked to design the carpets. 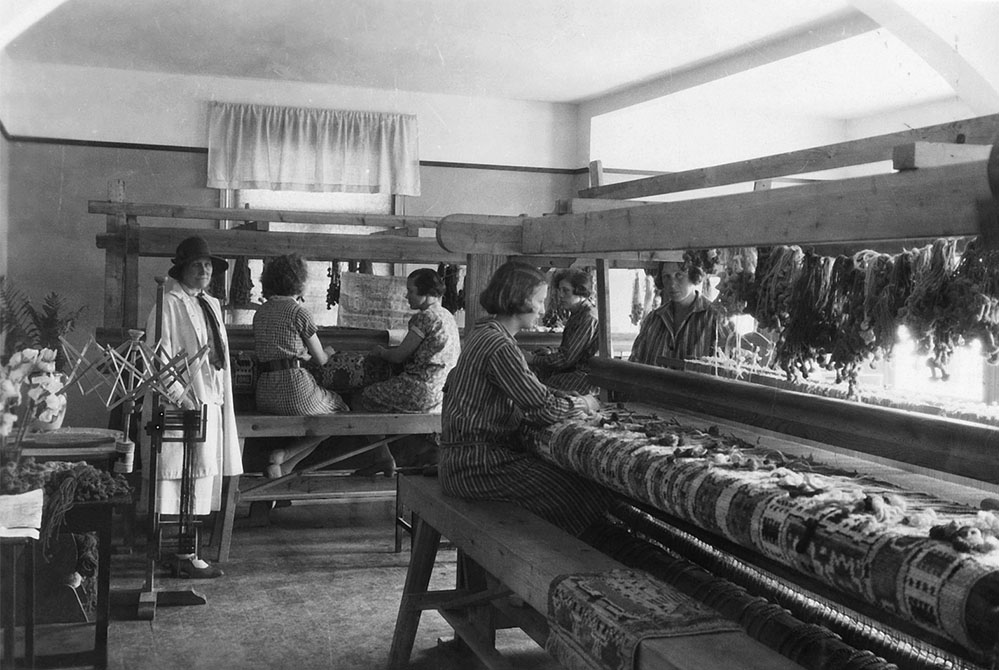 Two new books have been produced in connection with the exhibition: the exhibition catalogue itself, published by the Royal Palace, and a volume chronicling 100 years of textile art since 1919, edited by Angelica Persson, Ehrling Braghfors and Ulrik Swedrup.

After setting up on the western coast of Sweden, Märta Måås-Fjetterström added the beautiful nature of the Bjäre peninsula to her portfolio. Recurring motifs were fields with cows, horses (her favourite animal), sheep, meadow flowers, herbs and plants and knotty trees.

She was a pioneering female entrepreneur. As the exhibition proves, her enthusiasms translated into some of the 20th century’s most pleasing textiles. In Paris, 1925, the British textile manufacturer James Morton said after seeing MMF’s woven art: ‘It is worth getting a specimen of everything fresh she does…she is a creative poet working in new materials.’ 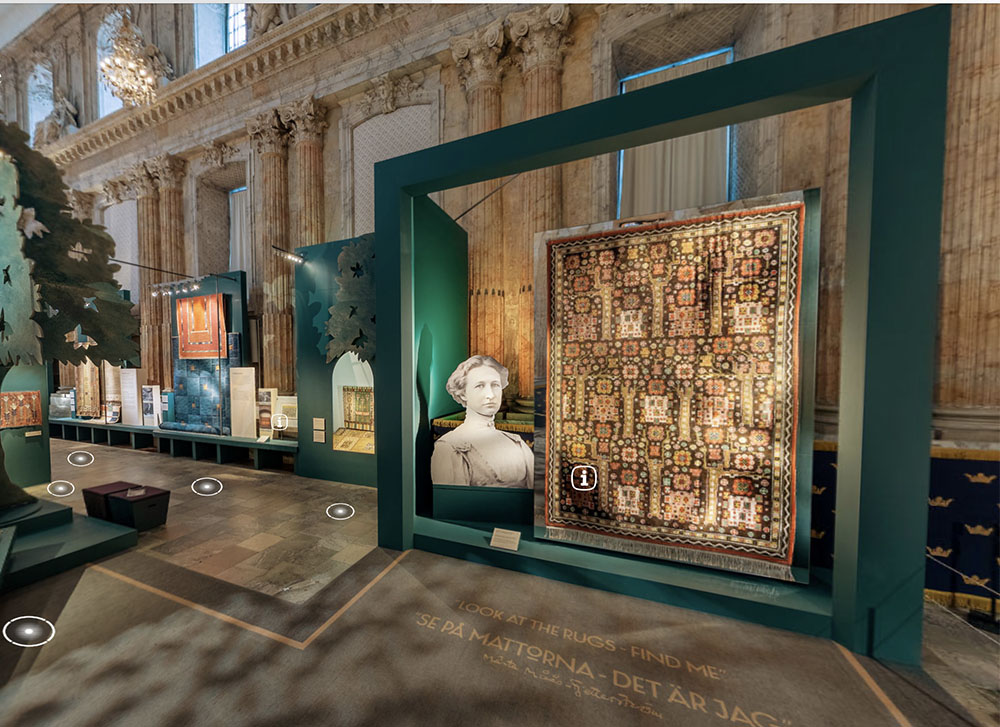 Digital tour of ‘Look at the Rugs—Find Me’

Explore the exhibition online digitally! ‘Look at the Rugs—Find Me’ has been filmed in 360° to show every angle of the State Hall. Keep to the left when starting the tour to follow Märta Måås-Fjetterström‘s career in chronological order. Click on the image to start the tour.