HALI contributor, Dr Susan Scollay has curated a study series outlining the importance of textiles in the ancient world at The Johnston Collection Museum in Melbourne. An art historian with special expertise and experience in a wide range of historic textiles, Dr Susan Scollay is the main lecturer for the lecture series which starts in April 2019, and will continue in 2020.

Key stages in the history of textiles in both western and non-western societies will be the focus. The evolution of various weaving and decorative techniques which underpin the appearance of cloth and clothing, as well as the social and economic impact of textiles and their role in international trade and artistic exchange, will be discussed.

If this is not enough to whet your appetite, HALI magazine is on the lecture reading list and our HALI 200, summer 2019 will be a raffle prize!

If you would like to attend the ‘Fabricating the world’ study series, we advise booking your space as soon as possible to avoid disappointment as some of the lectures are already sold out.

Woven cloth is arguably mankind’s most significant product of human workmanship. This lecture traces the evolution of the earliest textiles, made from plants about 28,000 years ago to the development of looms, animal fibres, tapestry making, embroidery and dyes. Recent advances in archaeology have produced evidence in Peru of one of the oldest known cotton textiles, more than 6,000 years old. While in southern China, there is evidence of looms, more than 2,000 years old, used to produce the patterned silks once traded along the Silk Roads from China to the eastern Mediterranean.

Fabricating the world | Mary spins the scarlet and purple: Textiles in in Biblical Texts and Greek Mythology with Natasha Amendola

In this lecture Natasha Amendola will demonstrate the ongoing influence of at least one 2nd century text on the representation of the Virgin Mary as a spinner. Although not common in the West, Mary is frequently shown with a drop spindle when visited by the Archangel Gabriel at the Annunciation in Eastern Orthodox images. Despite being decreed as Apocryphal and therefore supplementary to religious needs in the 6th century, second-century texts maintained an important and ongoing influence on the reception of the Virgin Mary. 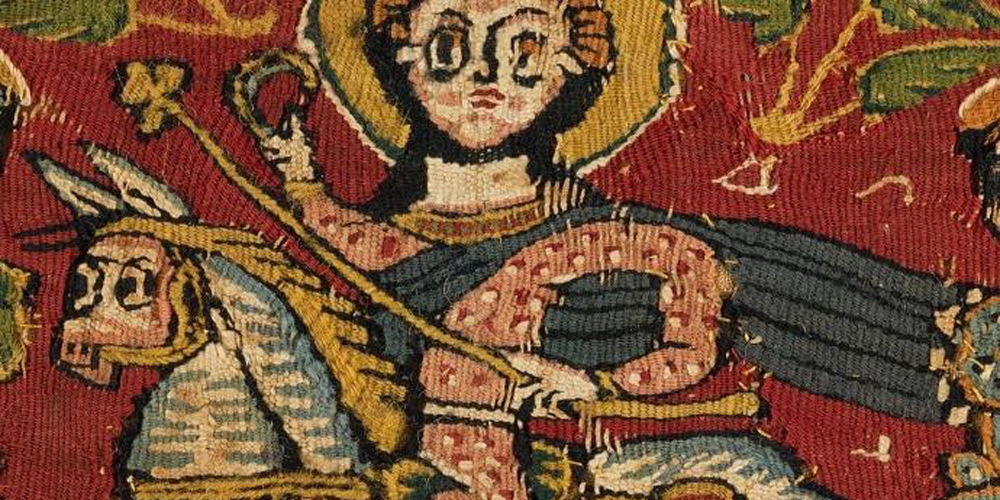 One of the most fascinating groups of ancient textiles available for study by modern-day scholars, are the tapestry-woven fragments of the Coptic Period in Egypt, from the late 3rd to the mid 7th centuries. This era–after the Pharaohs and before the Muslim rulers–saw an explosion of figurative designs and portraits, characterised by the intense gaze and large eyes of those represented. At the same time, non-Christian weavers in Egypt were linked to their Mediterranean and near-Eastern neighbours in their production of colourful and highly decorative flat-woven covers and rugs. 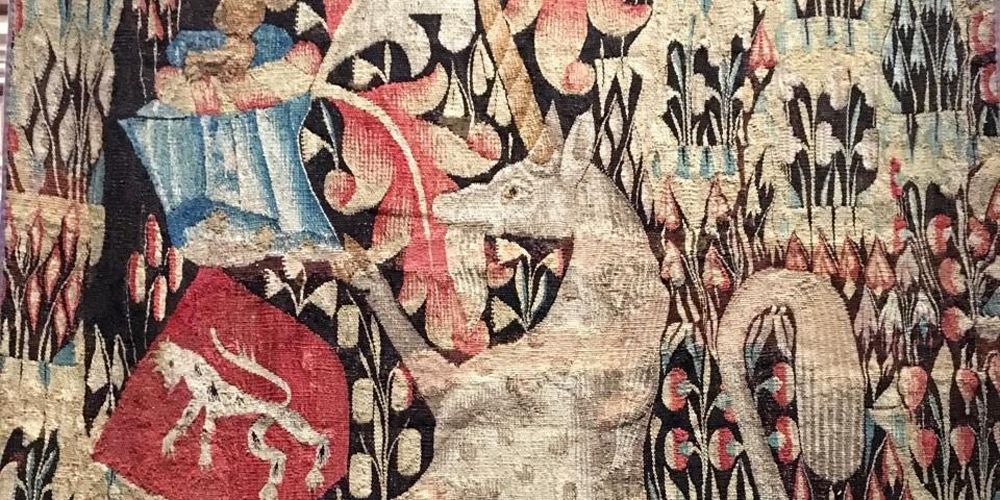 In this illustrated lecture Cresside Collette will explore the history of tapestry weaving in these European centres over the centuries, and discuss the major suites of tapestries such as the 14th century ‘Apocalypse of Angers’ and the 15th century ‘Lady and the Unicorn’ that exist to this day. With attention to both history and technique, she will demonstrate the ways in which technical and visual convention has both informed recent developments in French tapestry weaving and enabled the recent emergence of new and innovative style and content.

Fabricating the world | The invasion of colour: Textiles in Early Modern Europe with Susan Scollay 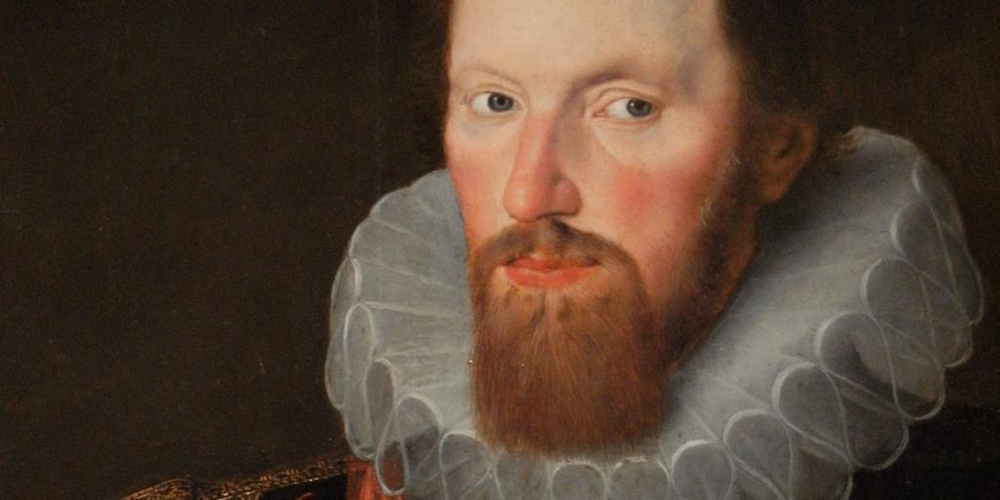 Living in the 21st century, we choose our clothing and soft furnishings from a variety of colourful fabrics, enabled by 19th century advances in synthetic dyes and man-made fibres. Until then, cloth was coloured with natural dyes and, until the 16th century, most Europeans wore clothing in muted shades of grey, brown and blue. Brighter colours were expensive to produce and even then, luxurious black remained a favoured hue. Expansion of the global sea trade in the second half of the 16th century brought about an explosion of colour in the worldwide production of textiles and figures such as Henry VIII and his Tudor court assisted in promoting the new fashion.

Fabricating the world | Lace: a textile that conceals and reveals with Margot Yeomans 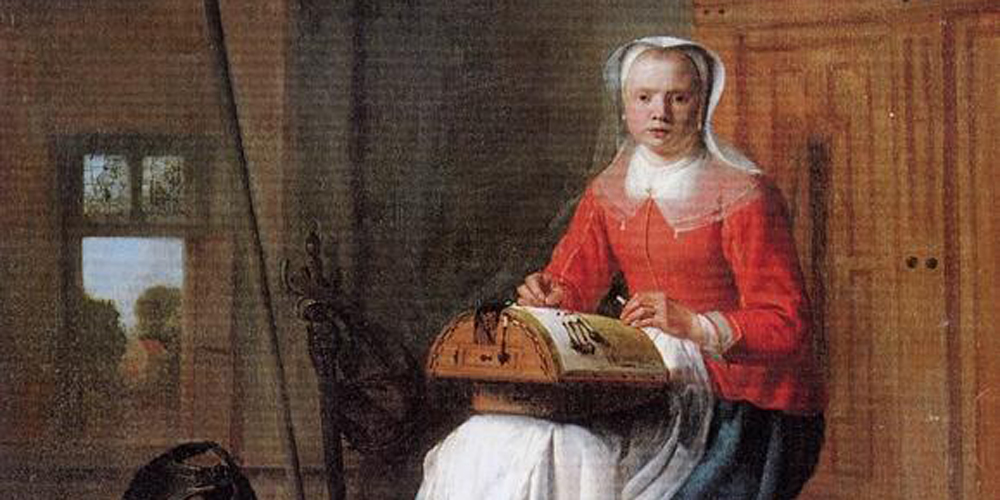 The history of lace-making goes back more than four hundred years. At its height of popularity in the 17th century, it was a commodity of enormous value, coveted by both men and women. As many paintings of the 17th century attest, lace-makers were a favourite subject for artists. Most of the young women in these paintings are anonymous, but each painting can tell a story that conceals or reveals the life the young lace-maker may have led. In this talk Margot Yeomans will discuss the history of lace and the lives of the young women who made it. 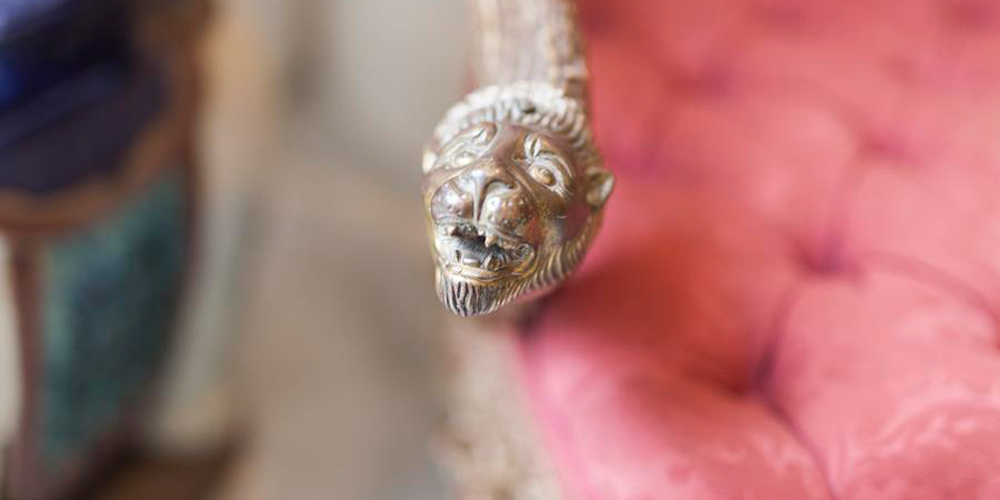 On display at Object Lessons is this mid-19th century chair with a frame made of stag’s antlers, and arm terminals of gilt brass lion heads. One of the several pieces that William Johnston purchased from the Maharaja of Cossimbazar.