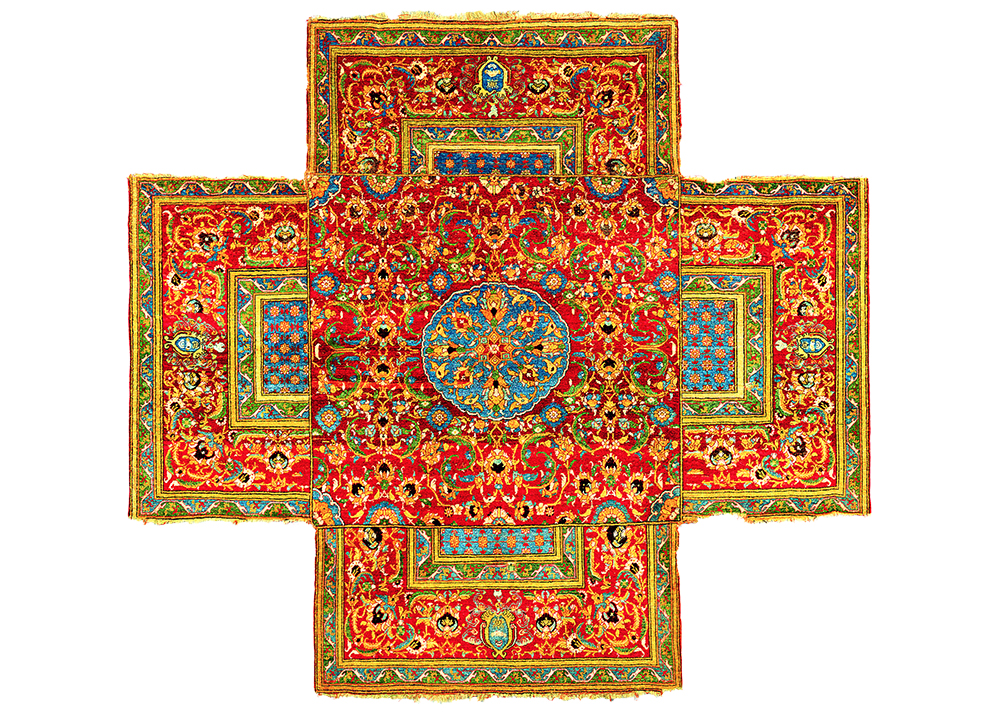 A historian by profession, Professor Marco Spallanzani has made a name for himself in carpet circles through his detailed and illuminating scholarly research in Italian archives and historic inventories.

San Gimignano is a small Tuscan town whose name immediately calls to mind the famous cruciform table carpet made in Egypt around the middle of the 16th century. Published many times, this carpet, in the form of the Greek cross, bears the coat-of-arms of the person who commissioned it, but he remains unidentified. The history of the carpet, including the date of its arrival in San Gimignano, is a mystery; but the ties between San Gimignano and eastern carpets have a tradition that goes back many centuries.

A transcription of the income and expenditure books of the government of San Gimignano for the years 1228 to 1233 was published in Florence in 2008. In this document, written in Latin, communal clerks recorded month by month how the city spent its money; and as one can imagine, the entries are numerous and heterogeneous. The word tappetum appears in two different entries, one in the income section for 1228, and the other in the expenditures section for 1231.

The first reference appears among tax payments by San Gimignano citizens. In November 1228, a certain Talentino made a payment not in cash but in goods—perhaps as pawns to be reclaimed later—which included, along with a cotta (an item of female dress) and a zendado (a type of silk cloth), a carpet, ‘Item habui…et I tappetum et I cottam et I zedadum Talemtini pro vi libris denariorum, decime.’

The second reference appears in the expenditure section. In December 1231 a dependent of the San Gimignano government made a payment to a notary, a certain Palmerio Pellari of San Gimignano, for two reasons: first because the notary had gone to nearby Gambassi to draw up some official documents, and second because he had loaned to the communal dependent a carpet needed on the occasion of the imposition of a direct tax (presa), ‘Item dedi…Palmerio notario, quia ivit pro Comuni Ganbassi…et comodavit Comuni et camerario tappetum suum, quando solvebantur denarii prese huius anni, pro merito, V soldos.’ Doubt arises about where the tax payment took place, whether at San Gimignano or at Gambassi; but it is clear that the carpet belonged to the notary Palmerio.

The tie between a carpet and a cash payment is interesting, for carpets were to be found on the table, or counter, on which a tax collector or a money changer handled cash transactions. In 1288–90 the Florentine Cepperello Dietaiuti bought a carpet in France for his money-changer’s shop. Such sources are obviously rare, and this new document testifies to this specific function of the carpet as early as the first half of the 13th century, and in a minor centre. Numerous 14th-century Florentine paintings illustrate carpets spread out on a table, usually those that represent St Matthew, the customs official, collecting taxes from the public.

The carpet that the notary Palmerio had loaned in 1231 to the government clerk anticipates by a century and a half the paintings of Andrea di Cione at the Uffizi, and of Niccolò Gerini and Pietro di Miniato at Prato that show a carpet extended over a counter and a clerk, in this instance St Matthew, collecting taxes from the public.