From 21 January to 8 May 2016, Berlin’s Bode Museum is host to an important exhibition, ‘The Madonna of the Würth Collection and Masterworks of the Staatliche Museen zu Berlin’. It is devoted to the work of Hans Holbein the Younger (ca. 1497-1543), one of the greatest portrait painters of the Renaissance, whose name has of course also become synonymous with certain early types of classical Anatolian carpets. 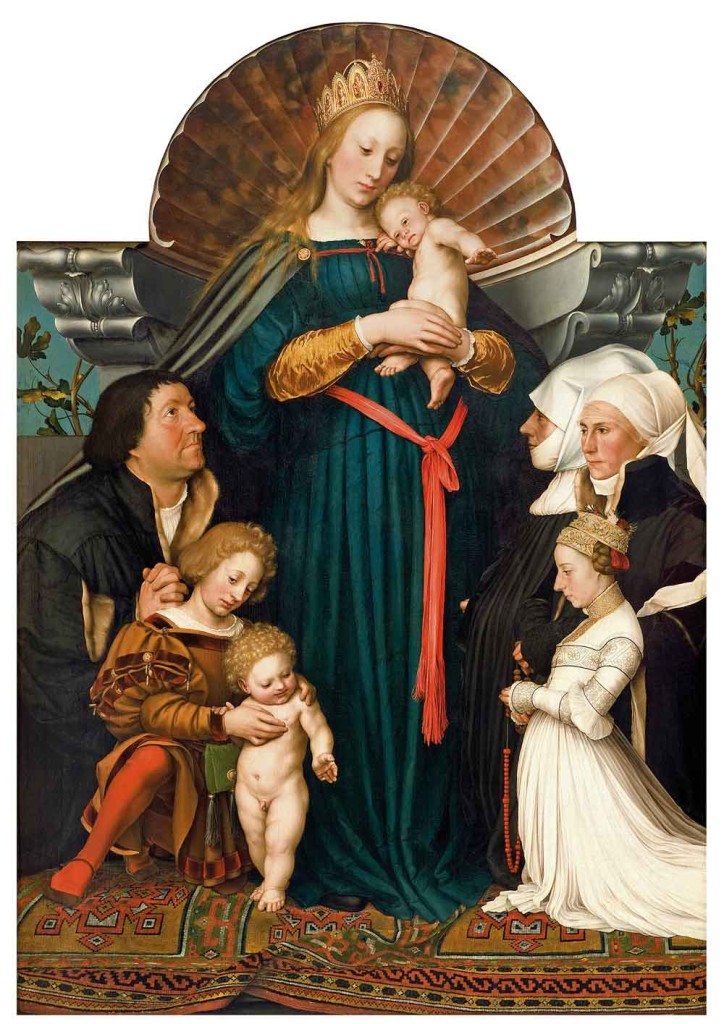 The son of Hans Holbein the Elder, the renowned painter from Augsburg (ca. 1460-1524), the younger Holbein began his career in Basel, where he quickly made a name for himself producing bold cartoons for stained glass, monumental decorations for building facades, and panel paintings. He later moved to London, where he lived from 1532 as court painter to King Henry VIII. One of his masterpieces from this period is the so-called Darmstadt Madonna (also known as The Madonna of Jakob Meyer zum Hasen) now in the Würth collection. In Berlin it is shown alongside other works by Holbein the Younger, his father, and his brother Ambrosius, as well as relevant examples of sculpture and textile art, notably the 15th-century yellow-ground Bode Anatolian village ‘rosette’ rug from the collections of the Museum für Islamische Kunst (I88,29), in which the angular endless knot medallions closely resemble those on the carpet glimpsed beneath the Madonna’s feet. 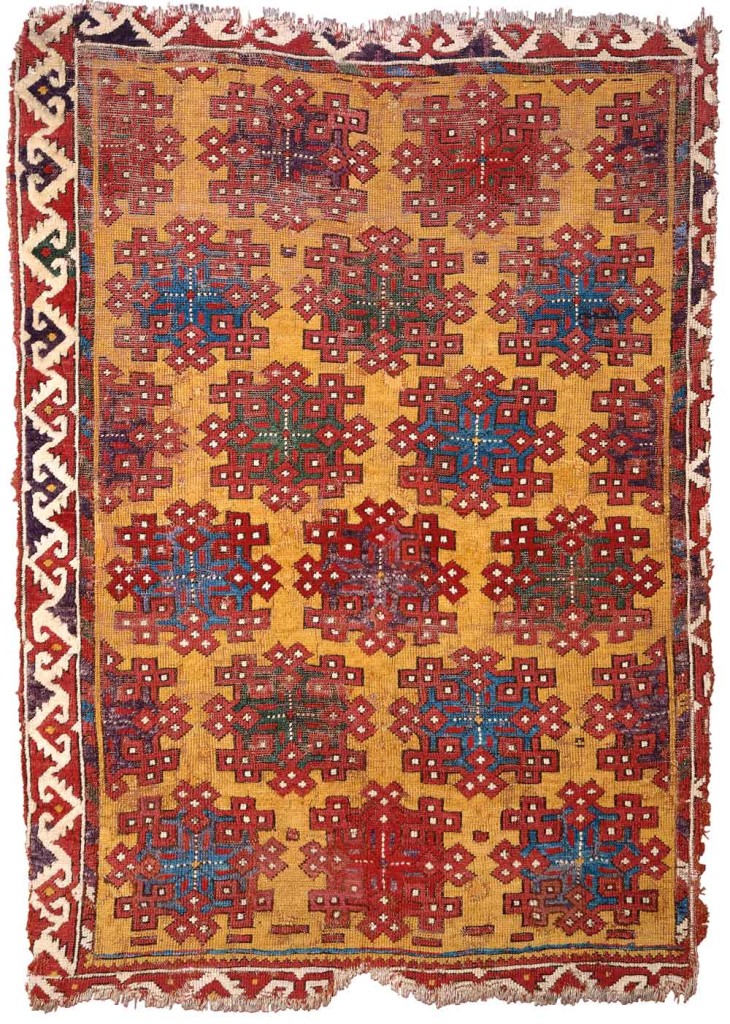 The Bode Anatolian village ‘small pattern Holbein’ or ‘rosette’ rug, late 15th century. 1.14 x 1.58m (3’9″ x 5’2″). Islamic Art Museum, Berlin, I88,29. The identical border appears on the ‘large-pattern Holbein’ carpet depicted in the National Gallery in London’s The Mass of St Giles by an unknown Franco-Flemish master in about 1500.

But perhaps the crowning feature of the exhibition is four panel portraits, including that of the merchant Georg Gisze. This famous painting is a worthy counterpart to the Madonna, both in terms of its layers of complexity and its place in the artistic canon. More than any other Holbein work it is responsible for the ‘Holbein’ carpet label, as it depicts a classic ‘small-pattern Holbein’ carpet with a ‘closed Kufic ‘ border, similar to that seen on another relevant carpet fragment on loan to the Bode Museum exhibition from the MIK (I 38). 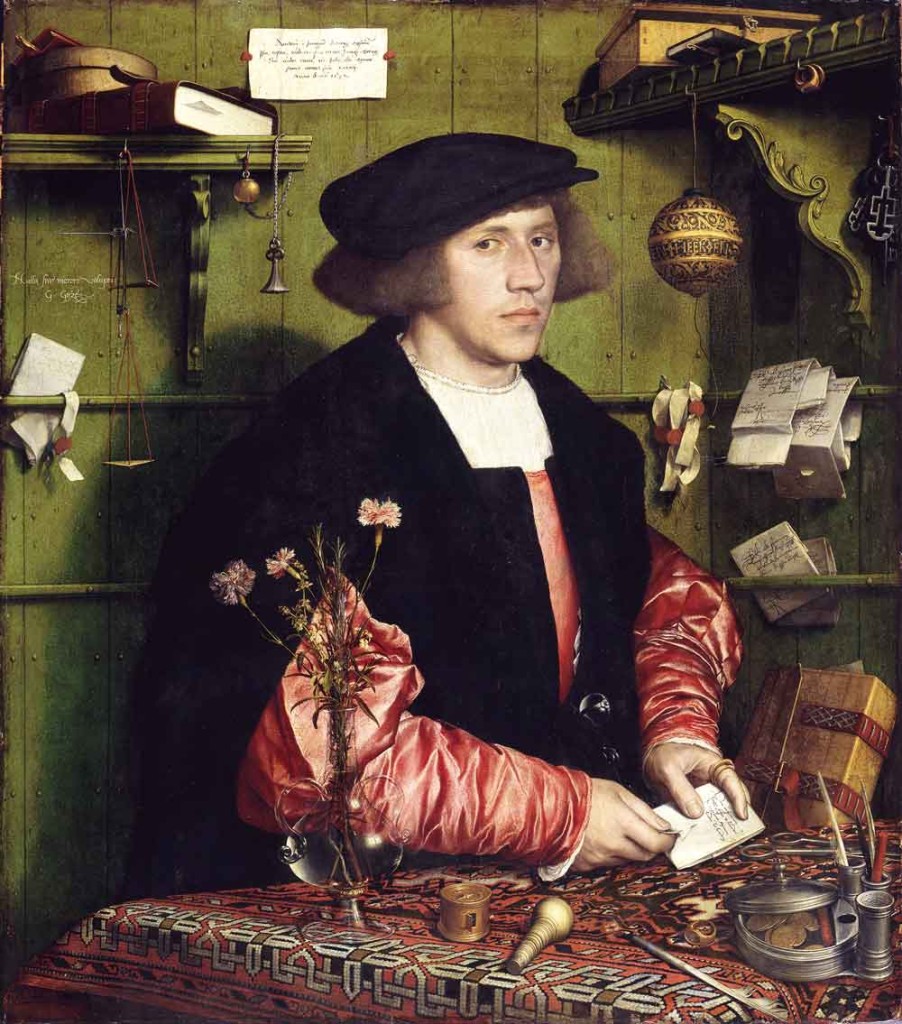 Portrait of the Merchant Georg Gisze by Hans Holbein the Younger (German, 1497/98–1543); 1532; oil on oak; Gemäldegalerie der Staatlichen Museen zu Berlin. A similar ‘small-pattern Holbein’ carpet from the MIK collection (I38) accompanies the painting in the Berlin exhibition.