The Hollander Collection of Chinese and Central Asian Silk Textiles

A select small group of Chinese and Central Asian silk textiles from the Roger Hollander Collection, many of them originally purchased from Spink & Son in London, and ranging in date from the medieval period to the 18th century, are being offered in a special online exhibition and sale by Thomas Murray.

Some of the finest and most celebrated silks in the present group of textiles from the Hollander Collection come from Chinese Turkestan, created by Uighurs who used the slit-tapestry kesi technique to great effect during the 12th-14th centuries (RH3567, RH3569). 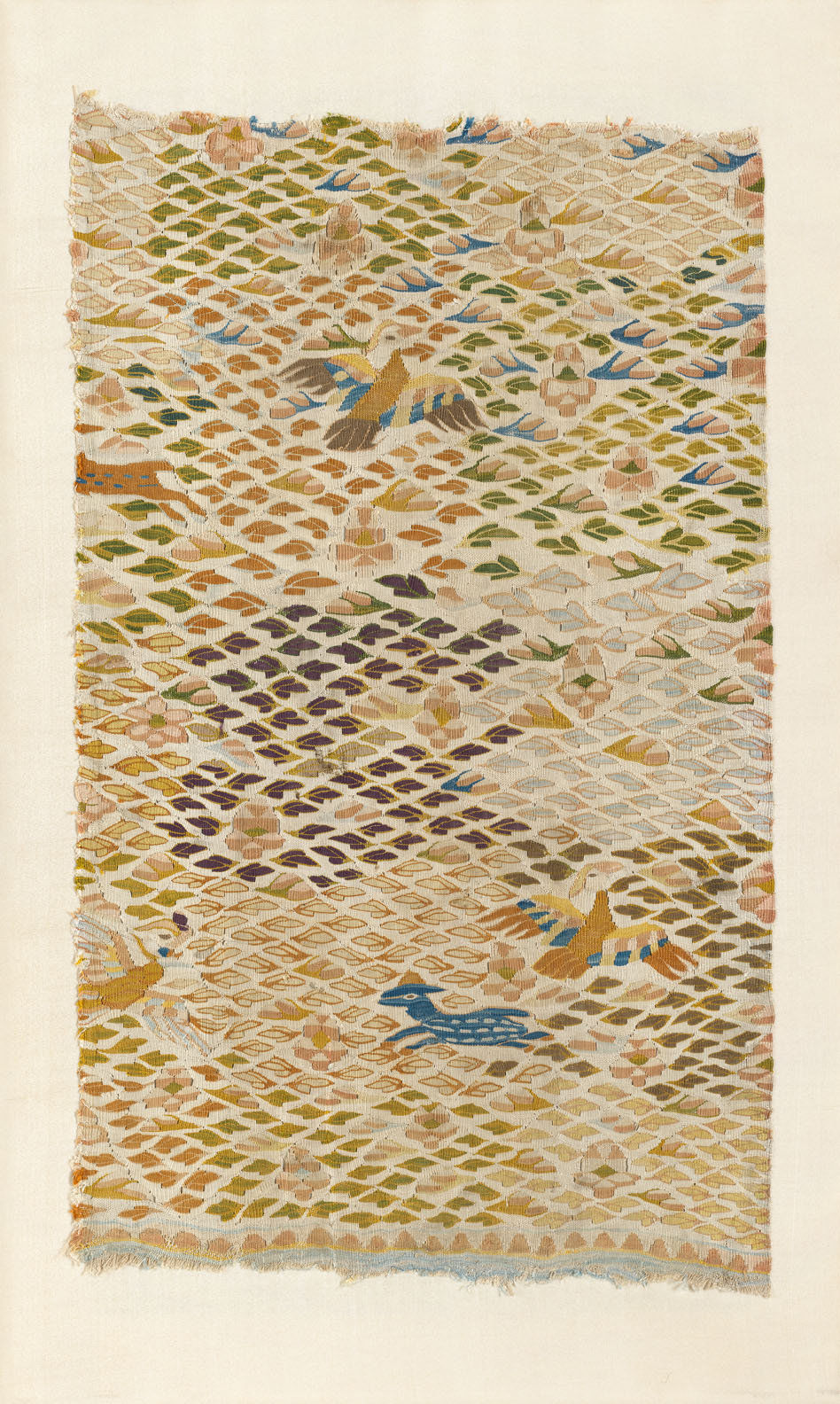 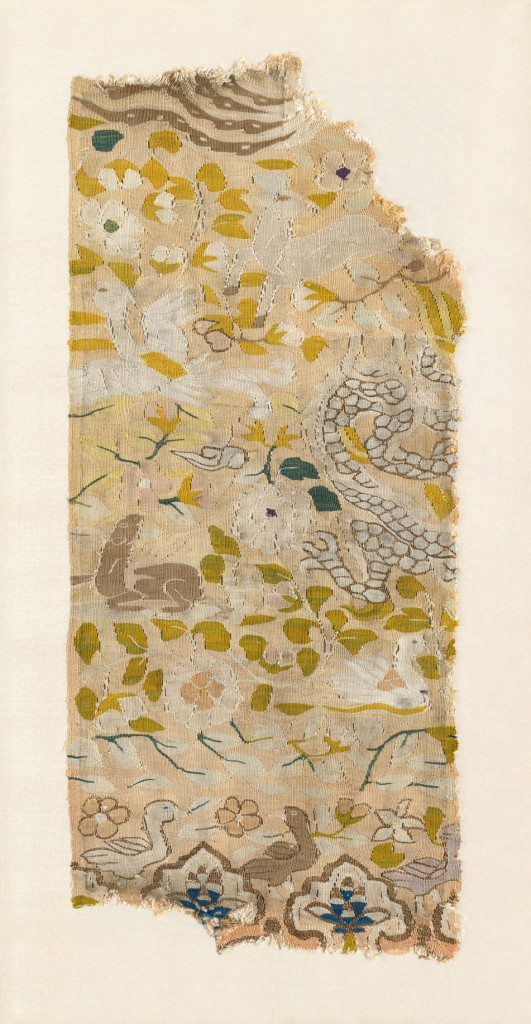 The Mongol Yuan dynasty (1271-1368) preserved and enhanced court support for Chinese silks with golden roundels that recall the brocades of the great Tang Dynasty (RH3565). 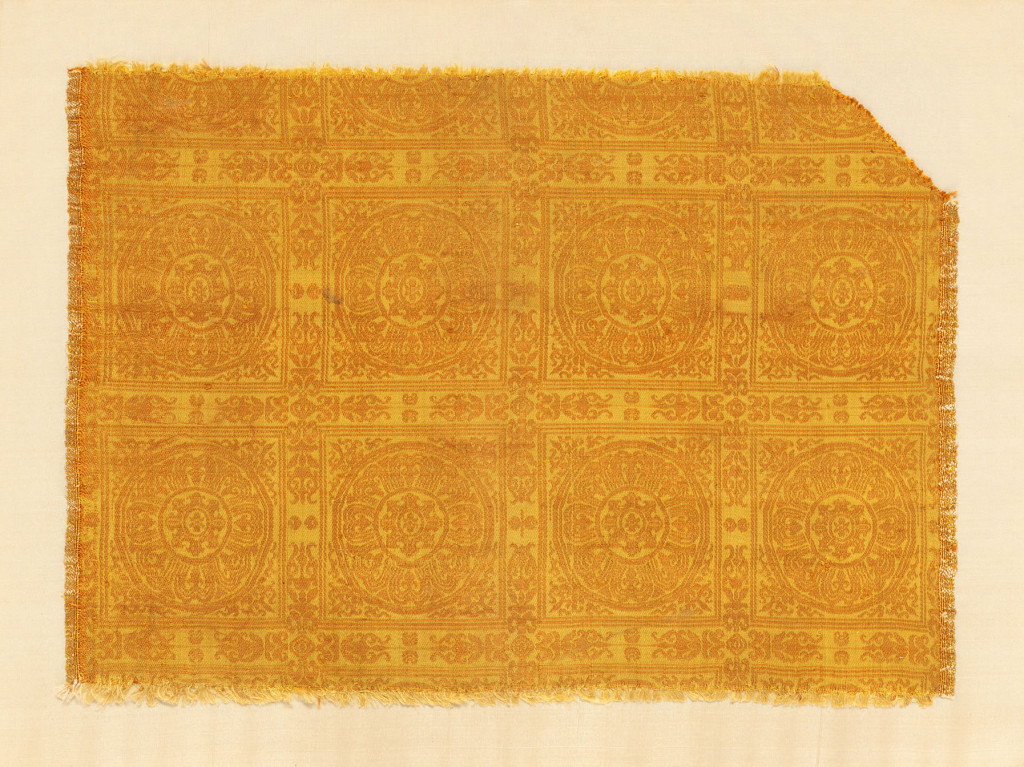 The Han Chinese Ming emperors (1368-1644) developed ever more complex ways to create beauty in textiles, as in ‘needle-loop’ embroidery, which encased strips of gold (RH3568, RH3566), while preserving auspicious Yuan themes, such as a Boy in Mongol Costume Riding a Goat (RH3564).

RH3568, Pendant. 5.5 x 17 in (14 x 43.5 cm). 13th/14th Century. Provenance Spink. An embroidered pendant of red silk damask, woven with cloud scrolls and embroidered in needle loop technique, with birds perched in an elegant flowering vine. The embroidery is worked over a ground of gilt animal skin, tipped with a lappet of green silk. 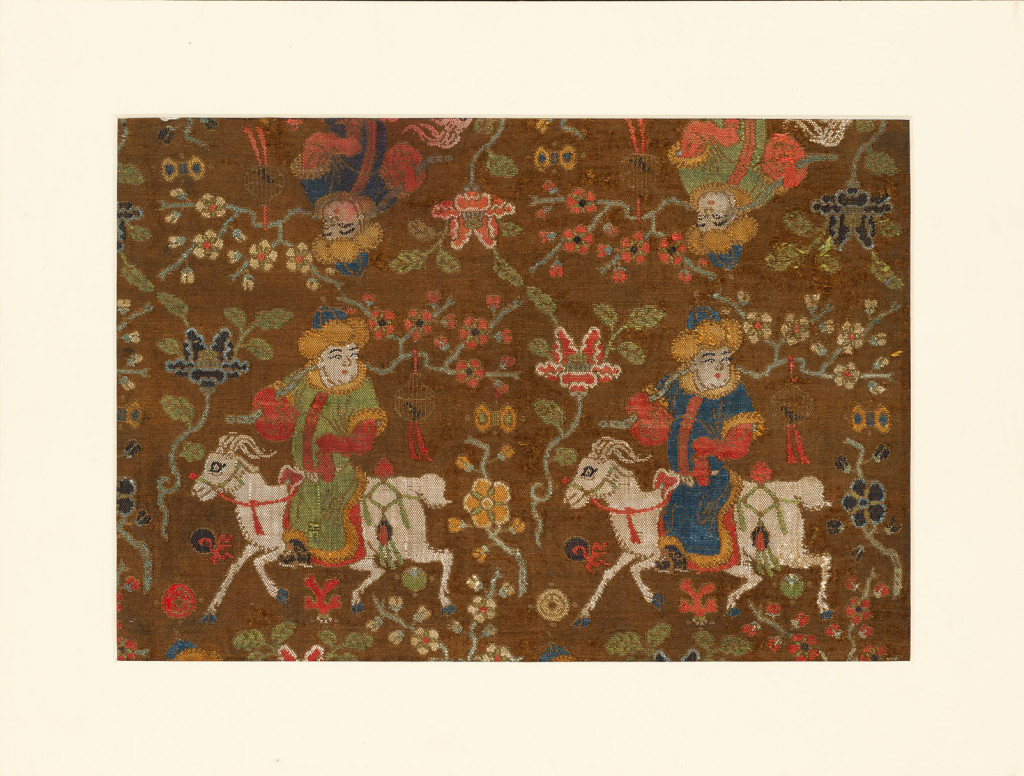 RH3564, Textile Panel. 9 x 14 in (23 x 34 cm). 15th/16th Century. Provenance Spink. A panel of silk brocade with ‘goat riders’ pattern. The brown ground is woven with a repeat pattern of boys riding on the backs of goats, bearing birds in cages suspended from branches of prunus blossom over their shoulders.

Ming brocades were sought after the world over, their eye-pleasing patterns making their way to the viceroyalties of Mexico and Peru, India, Turkey, western Europe and Japan where they influenced local weaving motifs and techniques (RH3571, RH3570). 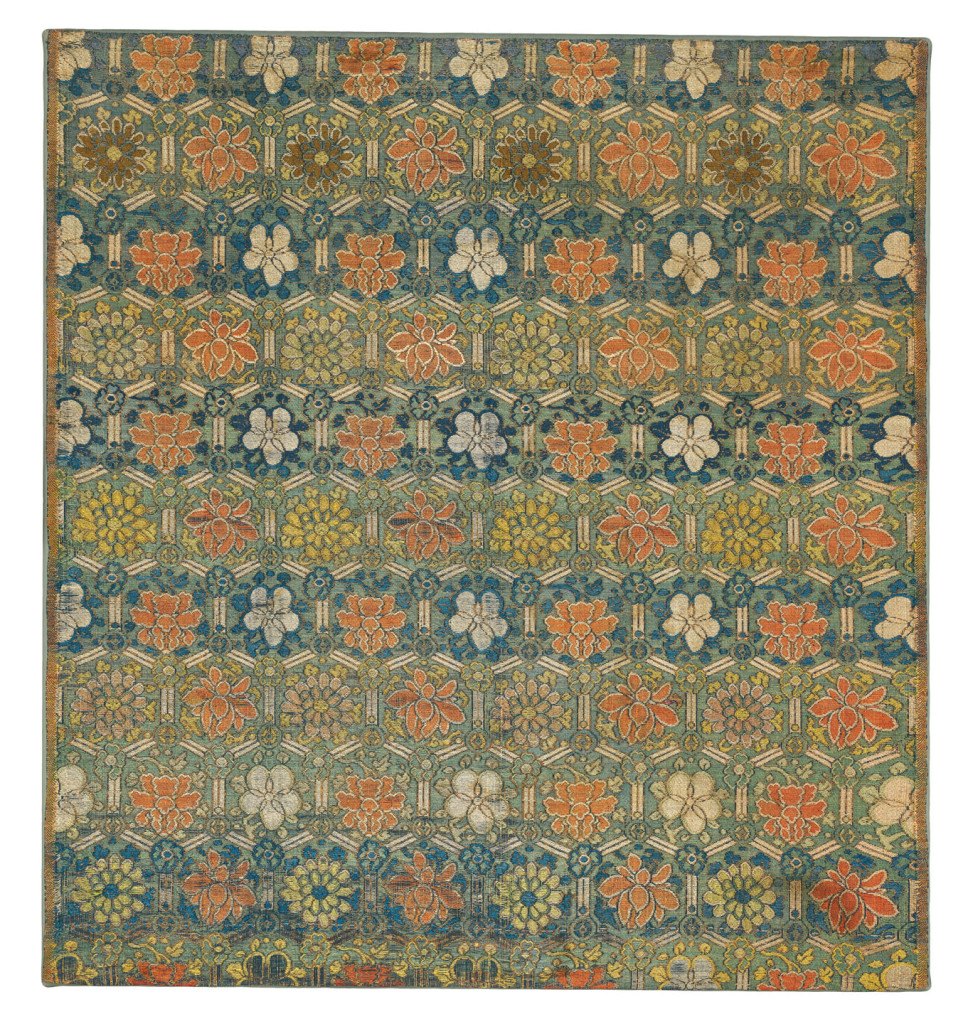 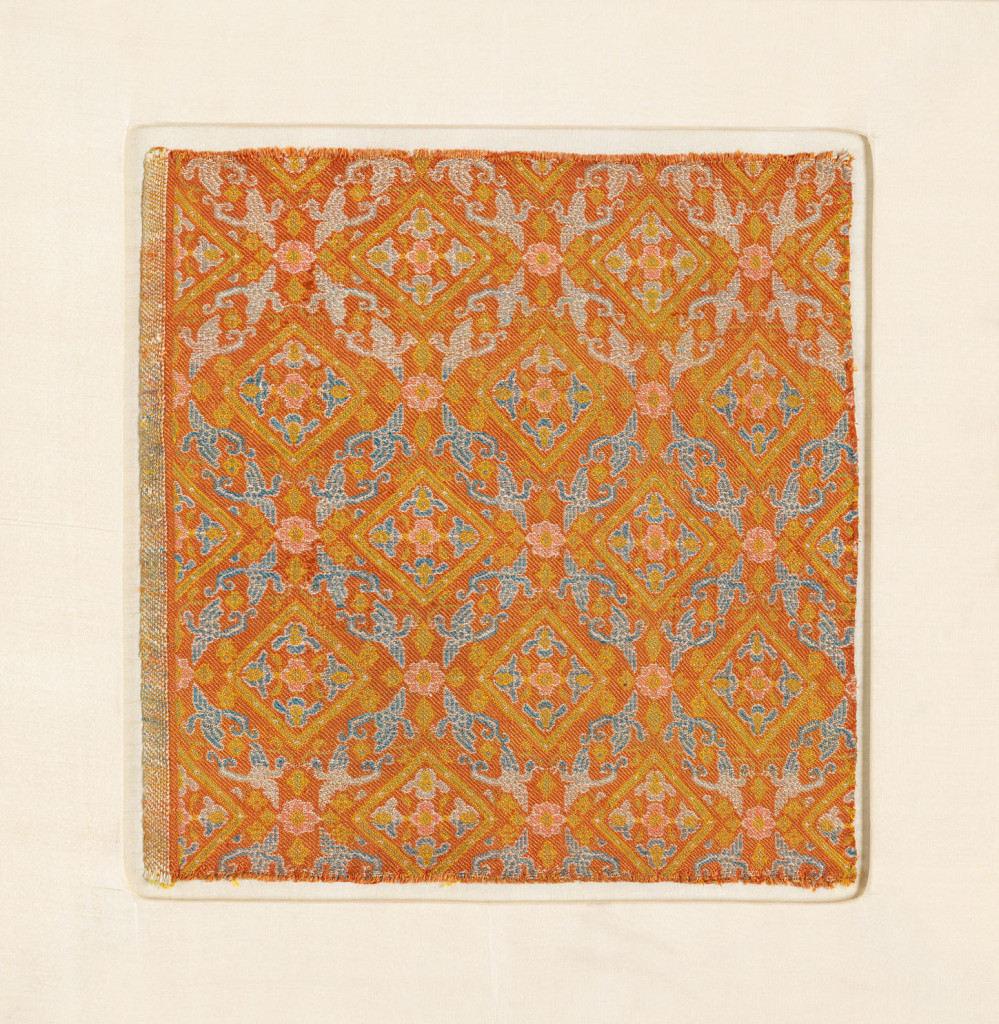 During the Qing dynasty (1644-1912), whose Manchu rulers, like the Mongols before them, were considered ‘barbarians’ by the Han Chinese, nevertheless presided over a ‘Chinese’ efflorescence in the arts, especially during the reign of the Emperor Qianlong in the 18th century. During this time weavers made luxury velvets (RH3368) festooned with flowers or embroidered panels with propitious motifs of birds, butterflies, blossoms and fans (RH3370, RH3203). 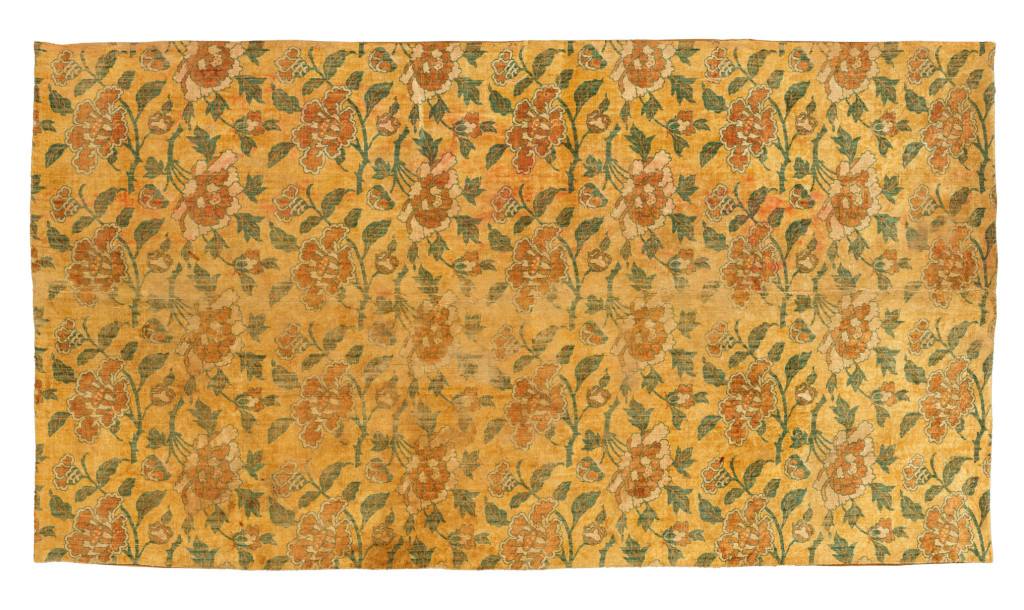 RH3368, Textile Fragment. 23 x 42 in (57.8 x 106.7 cm). 18th Century. Panel of yellow-ivory coloured silk velvet with a repeating pattern of large peonies and buds on green stems and leaves. Condition: wear and staining to velvet in some places. 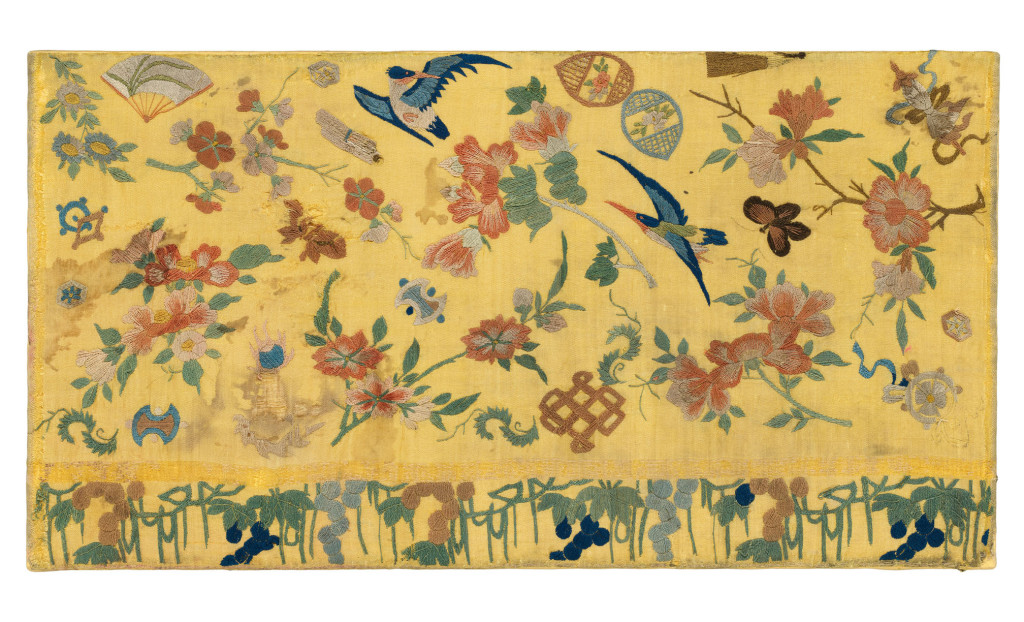 Roger Hollander collected textiles with passion. After a successful career in IT, in the late 1990s he left the business world to devote himself to other interests, and especially to building the world’s foremost collection of Indian cotton and silk trade cloth in the world, now in the Asian Civilisations Museum, Singapore. As part of his documentation effort in researching design sources of his Indian trade cloth, he also surveyed court and tribal textiles of the Indian subcontinent, oriental carpets and Islamic textiles, all of which contributed to the context of where Indian trade cloth designs came from. The present group of  predominantly early Chinese and Central Asian textiles were part of that documentation effort. He also collected textiles from Indonesia that displayed motifs inspired by Indian trade cloth, including batiks of Java and Sumatra and ikats of the outer islands, as well as Chinese minority textiles, assembling the largest privately held collection in the USA.