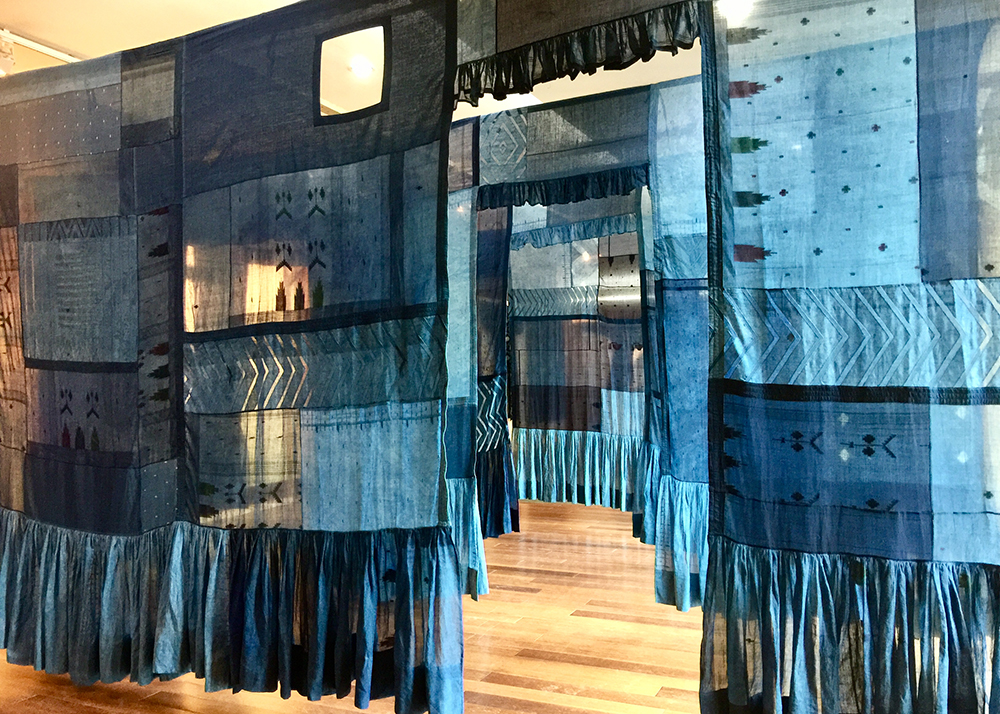 The cultivation of indigo dye across the Indian subcontinent is growing. From 9-12 November last year, an international event on the revival and resurgence of natural indigo—Indigo Sutra—was held in Kolkata. It aimed to ‘create awareness of reviving the cultivation of indigo in Bengal and other places where it had stopped due to political unrest or other reasons and also to encourage the use of natural indigo dyeing using natural methods’. Here, its chief advisor and author of three books on indigo, Jenny Balfour Paul, recounts her experience there, ahead of the making of a Channel 4 news programme on the subject this autumn, which came about as a result.

The aims and scope of Indigo Sutra were ambitious, springing from a long-held dream shared with fellow indigo lover Amrita Mukerji. In 2000 we explored West Bengal together in the footsteps of explorer and indigo planter Thomas Machell, who had been there a century and a half earlier, seeking traces of former indigo factories and wondering if a negative history there could be confronted and turned around. 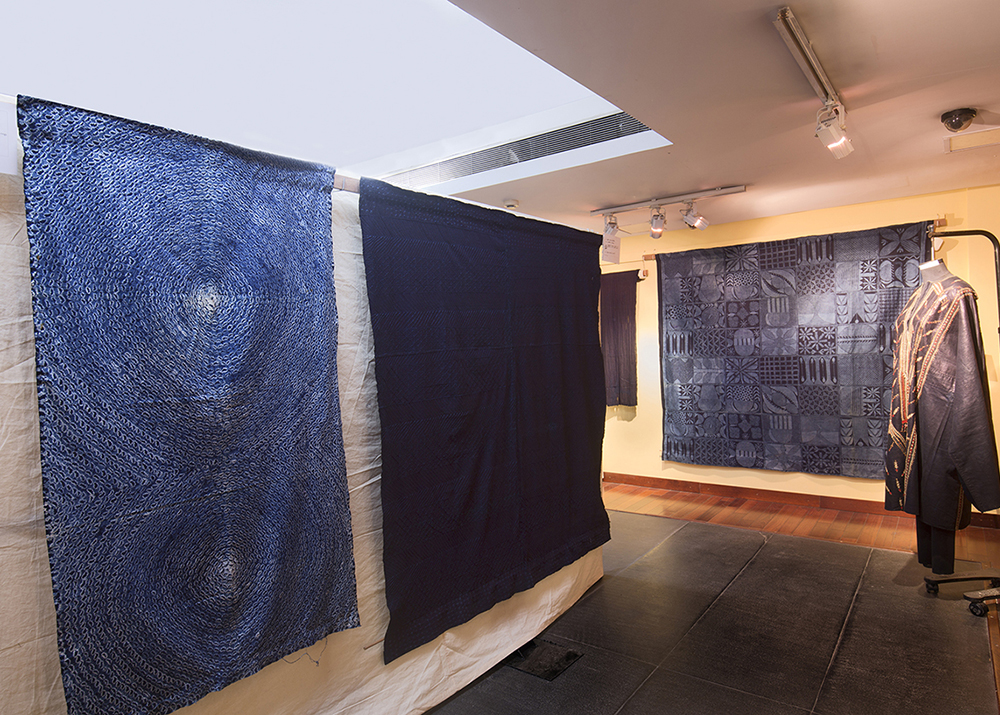 Indigo was grown and used for millennia in the Indian Subcontinent, but in the 19th century, rural Bengali labour was ruthlessly exploited by European (mainly British) planters to produce most of the world’s supply of the dyestuff, shipped from Kolkata to the west on East Indiamen. In the later 19th and early 20th century, peasant revolts against the system, as well as the discovery of synthetic indigo in Germany, destroyed the industry, apart from brief wartime revivals. A century before Indigo Sutra, Gandhi had used the unjust system of indigo production in Bihar to champion workers’ rights; known as the Champaran satyagraha, it was the first step on the road to India’s independence.

Today’s increasing global awareness of the advantages of using organic products has turned the spotlight back to sustainable natural dyes, the king of all being indigo, a soil enricher with many other environmental benefits. Amrita Mukerji founded the NGO Sutra Textile Studies in 2002 to raise awareness of India’s textile heritage and promote textile traditions. Past events covered conservation, batik and natural dyes generally, but Indigo Sutra focused solely on natural indigo revivals, in northern India and elsewhere, using expertise and guidance from Indian and international scholars and practitioners. 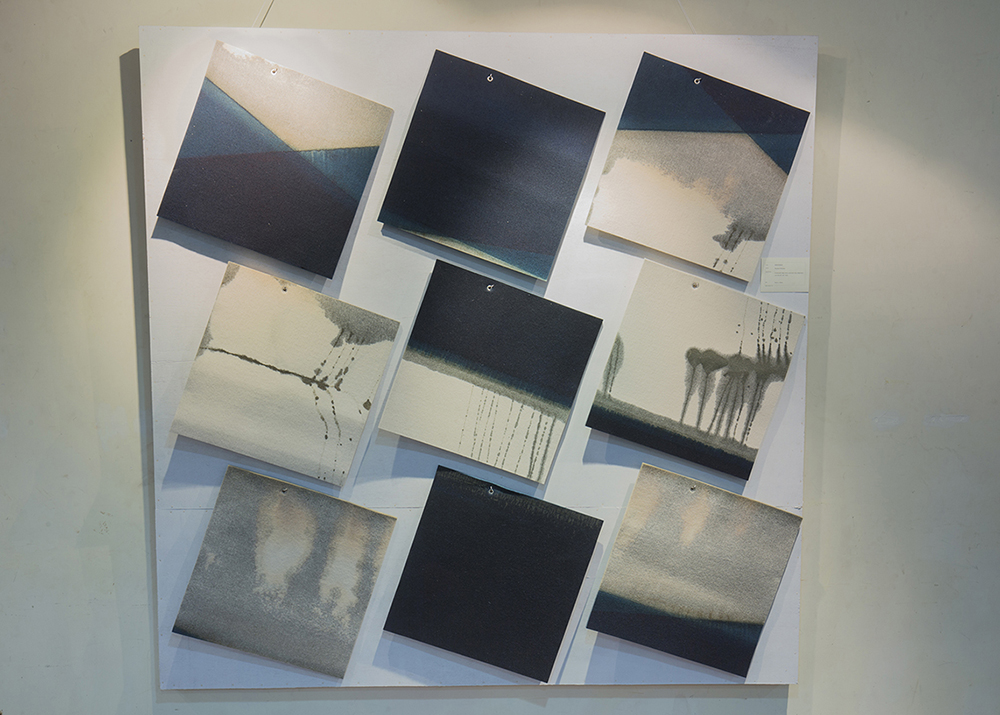 A two-day seminar began with a keynote address by world natural dye specialist Dominique Cardon and Bernard Imhasly’s discourse on Gandhi’s role in removing indigo’s colonial stain. Session topics moved from cultivation and dye manufacture to lively talks on artisans, natural dye vats and related techniques. Balachander Anbalagan described his commercial production of indigo while Aranya’s founder Ruby Ghaznavi discussed the successful revival of indigo in 1980s Bangladesh (i.e. pre-independence Bengal) once former resistance to past associations was overcome. Rashmi Barti’s ‘closed loop’ system of production and dyeing at Avani in the Himalayas impressed participants, and Rhina Rehmann, Patrick Brenec and Henry Joseph described their respective innovations in El Salvador and Guadeloupe. Professor Shin presented new research on bio methods of indigo reduction while Jesus Ciriza discussed scaling up fermentation indigo-dyeing methods. World indigo and conservation were covered by other speakers and Bina Rao of Creative Bee at Hyderabad brought live models onto the stage for the final talk. The seminar closed with Maiwa’s founder, Charllotte Kwon, chairing animated exchanges on quality control and marketing between an onstage panel and the audience.

The first indigo auction for over a century, on the heels of the seminar, was so unique it headlined the business section of the Times. Bidding was fierce for ten chests of indigo going under the hammer of auctioneer Arijit Das Gupta from J Thomas and Co.Pvt.Ltd, the world’s oldest and largest tea auction house, still operating from buildings known as Nilhat House (Indigo Market House), reflecting the company’s origins. Maybe the ghosts of tainted auctions past were exorcised at last. 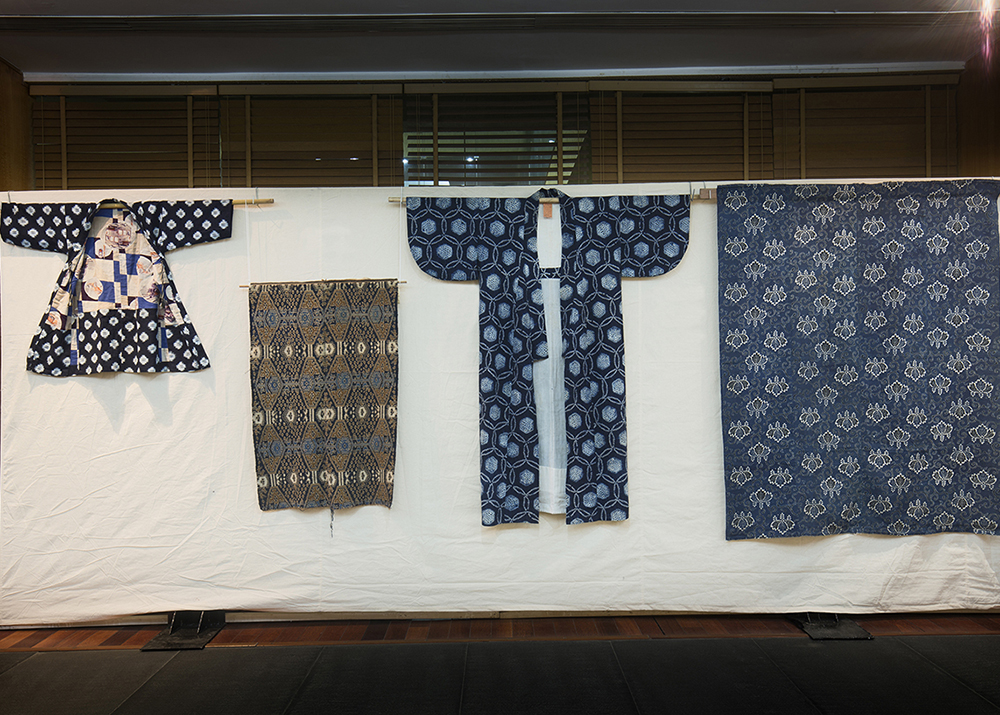 The evening concluded with a splendid fashion show, music, dancing and meal hosted by Sidharth and Sangeeta Dudhoria on their office rooftop. The following evening’s party was on a barge on the Hoogly River in the wake of innumerable ships laden with commodities of empire such as indigo, opium, jute, silks and cottons.

The Grand Bazaar held alongside the seminar was a triumph, selling irresistible textiles and clothing, most of natural dyes. A superb public exhibition, accompanied by documentary film shows, was curated for ICCR’s two galleries by Jaipur-based designer Simon Marks, assisted by textile conservator Emma Ronald. Exhibits ranged from a specially-created replica of the model of a 19th-century indigo factory at London’s Kew Gardens to indigo in Bengali folk art, fine examples of new and old African and Asian textiles, indigo artworks and exquisite installations by young Kolkata designers Santanu Das of Maku and Bappa Biswas of Bai Lou. It is encouraging to see so many young people embracing the cause of sustainable textiles and fashion. 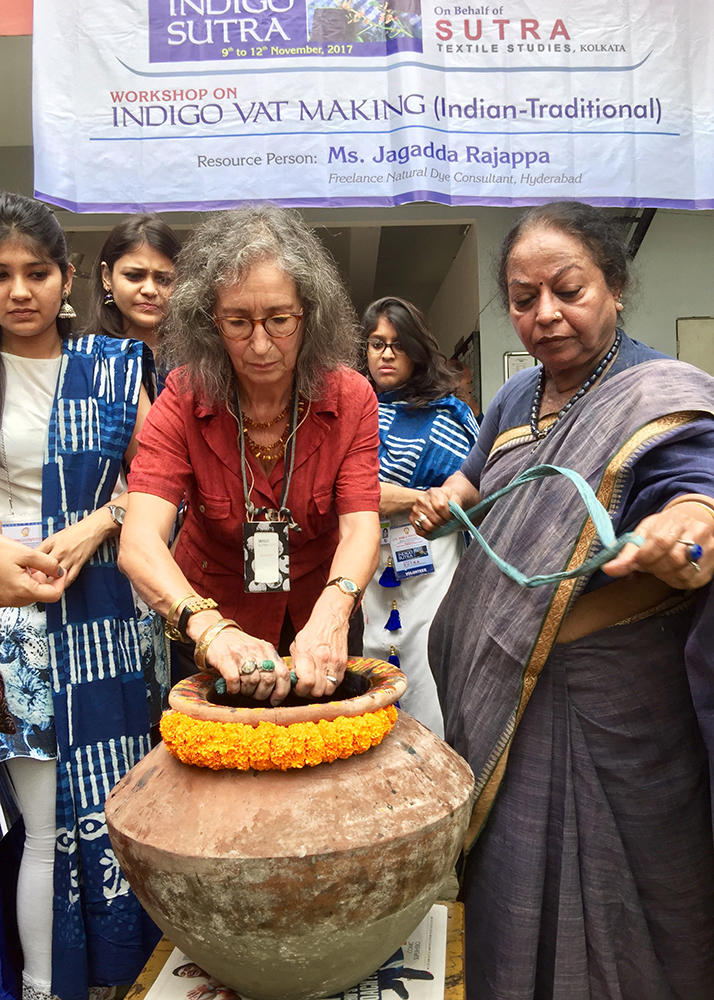 During the seminar, open-air demonstrations of ajrakh block-printing by the Khatris of Kutch and of resist techniques by Nigerian indigo artist Gasali Ademeyo entranced schoolchildren and adults alike. The action then moved to the JD Birla Institute of Sciences for two days of over-subscribed practical workshops, covering different kinds of dye vats and related textile techniques. Jaggada Ranjappa’s open-air demonstration of fermentation dye vats added extra colour, her clay vats being adorned with golden marigolds. Participants also went on optional excursions to weaving and dyeing centres outside Kolkata, while others visited such places of interest as the Botanical Survey of India’s marvellous collections in the Botanic Gardens’ herbarium and the Indian Museum. The latter has an exceptional collection of botanical and economic history exhibits displayed in period cases. 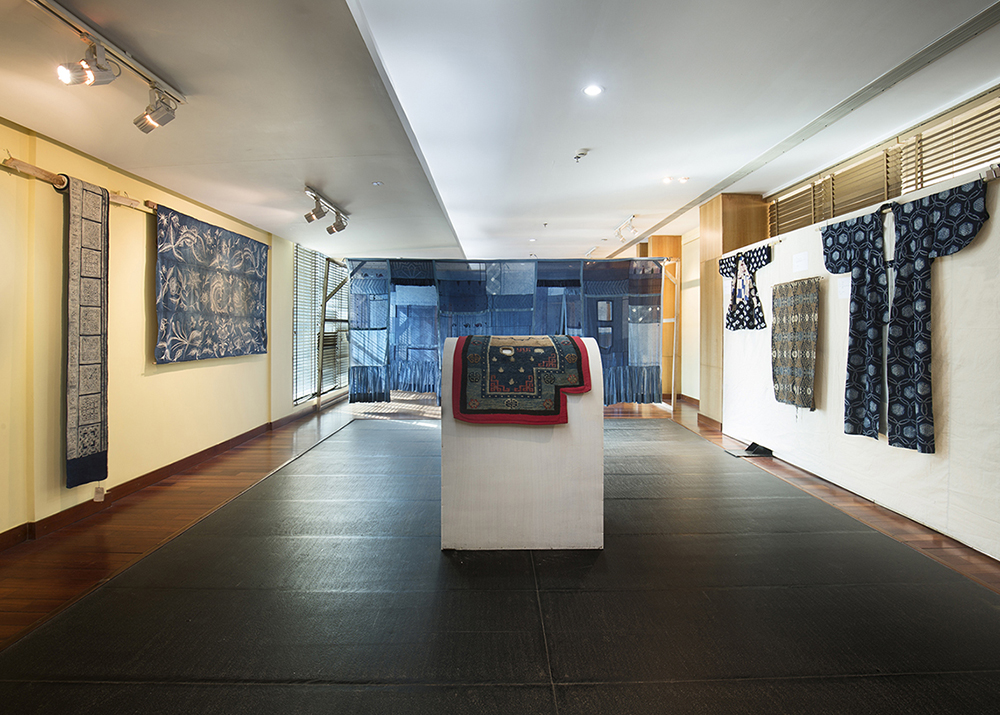 Avalon Fotheringham, successor to Rosemary Crill as Curator of South Asian textiles at the Victoria and Albert Museum, attended the event and wrote this summary: ‘Indigo Sutra brought together artists, designers, scientists, historians, manufacturers, agriculturalists and more all united by their passion for indigo. The event has been truly multidisciplinary, ranging from engaging panel discussions to sumptuous fashion shows. The Sutra team considered every detail right down to the handmade indigo-dyed delegate bags. Two exhibitions telling both historic and contemporary stories of indigo have been beautifully curated and showcase spectacular work, while the Grand Bazaar featured some of the best artisans practising in India today. A range of hands-on workshops and demonstrations in combination with tours to actual makers’ studios rounded out the event with practical experience, while evening celebrations have given delegates the opportunity to share their work with fellow indigo advocates from all around the world. The event has been an incredible success—thanks to Sutra for such an educational and inspiring experience.’ When Team Sutra received this accolade it was not so much the icing on the cake as the blue froth on top of a healthy indigo vat ready for action. Since the event, many more blue ripples have spread east and west. 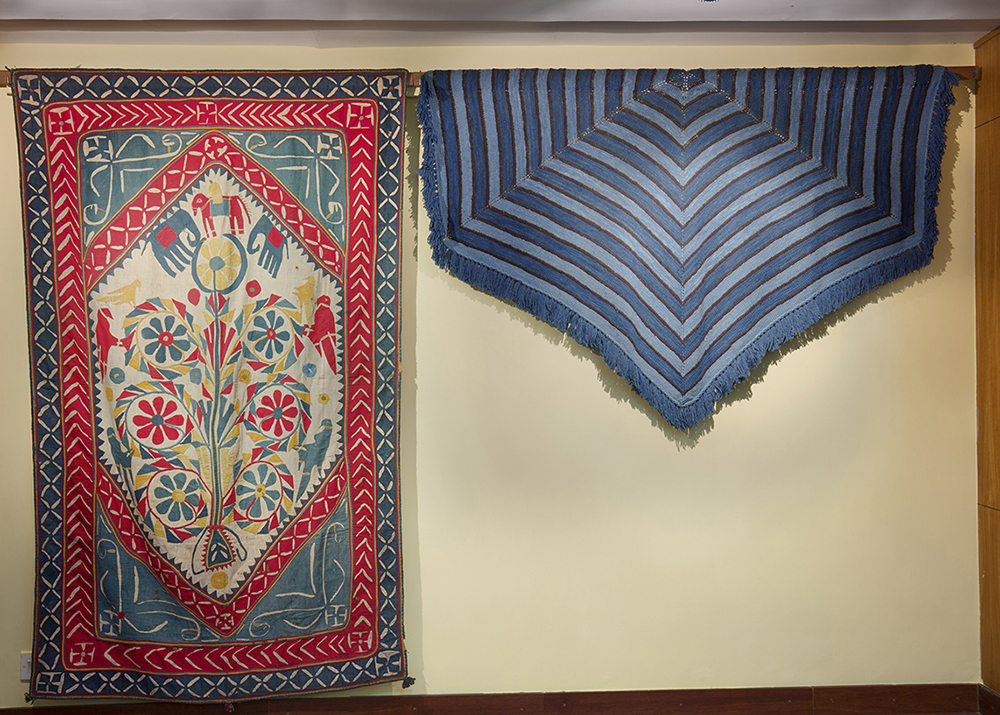 Indigo Sutra was held at ICCR, Indian Council for Cultural Relation, and J. D. Birla Institute in Kolkata on 9-18 November 2017. Jenny Balfour Paul will present a talk on her indigo journey at HALI London on 24-30 June 2019. More information will be announced soon. To register your interest, email [email protected].