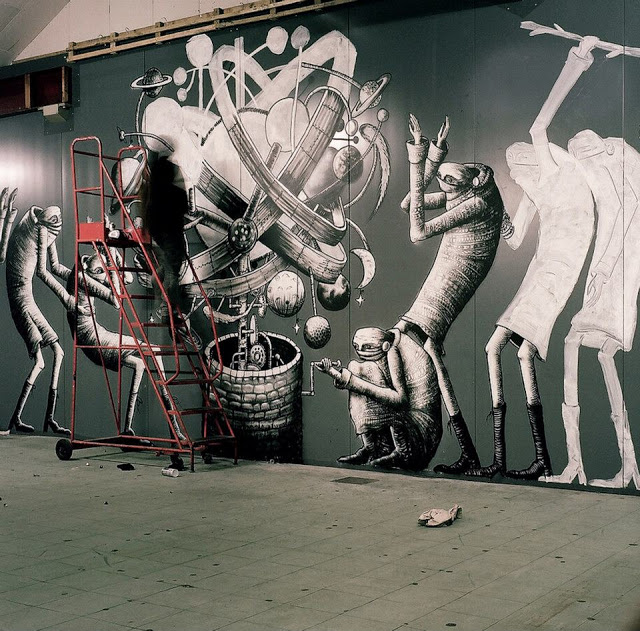 Mural in the making: Phlegm at work on the wall at Canal Mills, Leeds

Canal Mills, in the Armley district of Leeds, is an imposing reminder of the intensive textile manufacturing that once characterised this hub of the Industrial Revolution.

The Mills still hum with industrial sounds, in a manner of speaking: since September 2012, the site has served as a venue for electronic music events and live music performances, as well as art exhibitions, theatre and film screenings.

Nor does it look quite the same, at least inside – a new mural, for example, has just been completed, taking up an entire wall in the huge mill complex. The Yorkshire-based street artist Phlegm, known for his work in Sheffield, London, New York and Milan, has covered the mill wall with black-and-white-spraypainted figures that evoke the oily, gear-grinding, machine world of the Industrial Revolution. The theme is in keeping with Canal Mills’ determination to retain links to its heritage, and to honour the mill’s former function.

Canal Mills was amongst the most prominent of the great textile factories of the eighteenth and nineteenth centuries. (Weaving as an industry in Leeds dates back to the Middle Ages, especially with regard to the woollen cloth trade; however, the Industrial Revolution spurred rapid development of the sector, and consequent growth earned Leeds ‘city’ status in 1893.)

Watch Phlegm  at work on the Canal Mills mural here.