A living collection at HALI London

Visiting Anglo-Canadian collector Bob Bell at his home in the Cotswolds, Aaron Nejad finds a passionate, experienced and well-informed man who lives surrounded by an eclectic array of rugs, and who, despite the demands of a busy professional career, always finds time to enjoy and share. There will be an opportunity to see select pieces from Bell’s collection at HALI London. Limited places are available for the Special Guests: Show and Tell on Friday 28 June. Be sure to book your place on HALI London Events of your choice by adding them as ‘Additional Items’ on the Eventbrite booking form. The following is an abridged article from HALI 199 – coming soon! 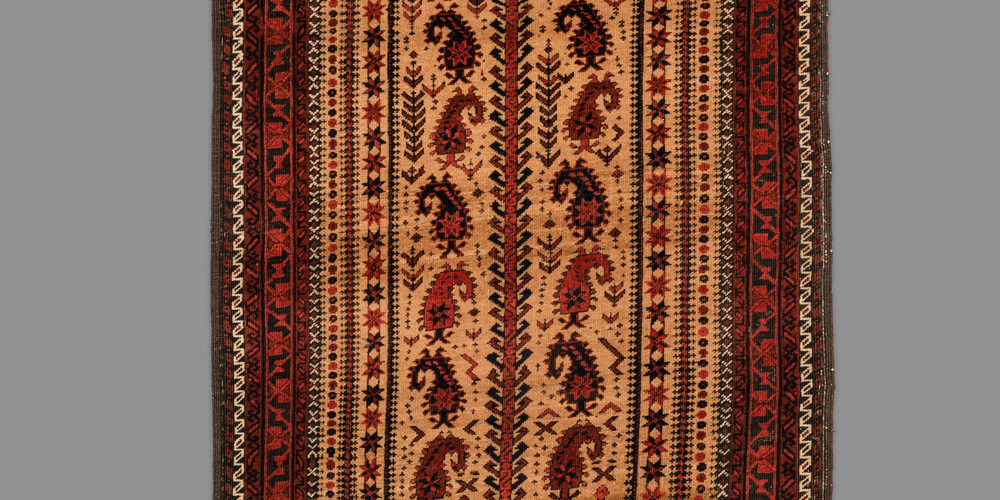 One of the most enduring myths around the antique carpet community is that there is a distinction between collecting and decorating, that collecting requires knowledge and connoisseurship whereas decorating requires taste and style. But nestled in the Cotswolds there is a household which has managed to combine these skills. 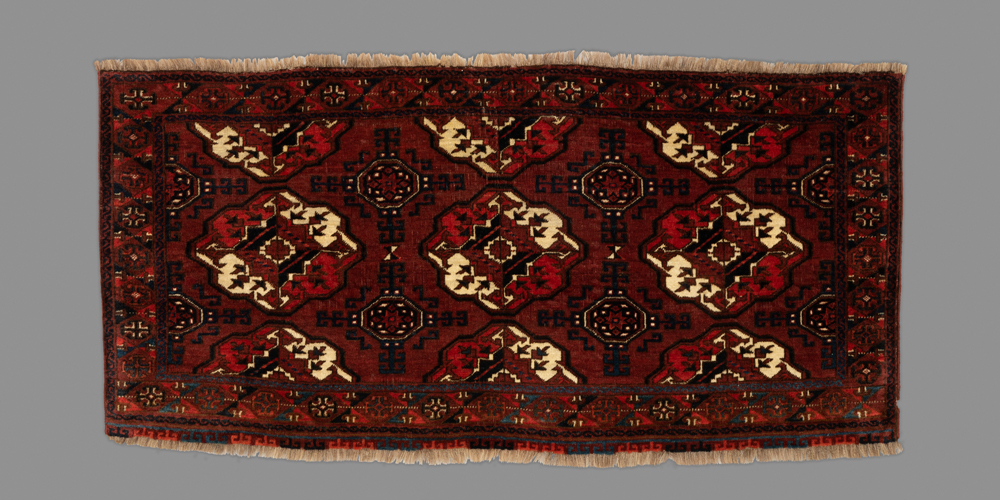 Robert (‘Bob’) Bell and his wife Patty have been collecting and decorating their homes for over 40 years. He is a familiar figure on the rug scene across North America, Europe and the Middle East, known for his passionate appreciation of rugs and textiles, and his very large and eclectic collection of items stretching from Europe to East Asia. Rugs have always been a part of his life. 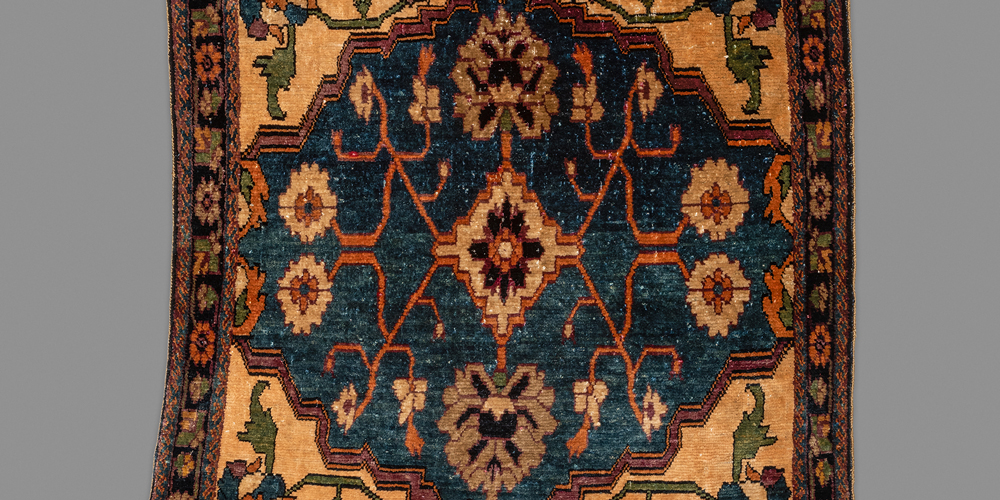 Bob Bell was born in Lebanon to a British-Jewish father and a Lebanese mother. He recalls that as a child growing up in Lebanon and Canada, many rugs were scattered around the home, including an old Baluch rug which lay on his bedroom floor and which he still owns. He bought his first rug around the age of 30 and has collected consistently ever since. He trained as an engineer and as his career developed he travelled extensively. In 1973, he married Canadian-born Patty, and in 1981 they moved to London where Bob became vice president of a company involved in hospital planning, development and construction in the UK, Europe and worldwide. They lived in Holland Park until 1985 after which they returned to Toronto. By that time, according to Bell, he had become a ‘rug collector’. Back in Canada, he became increasingly involved in the rug collecting community, and was elected President of the Oriental Rug Society in Canada between 1998 and 2004. 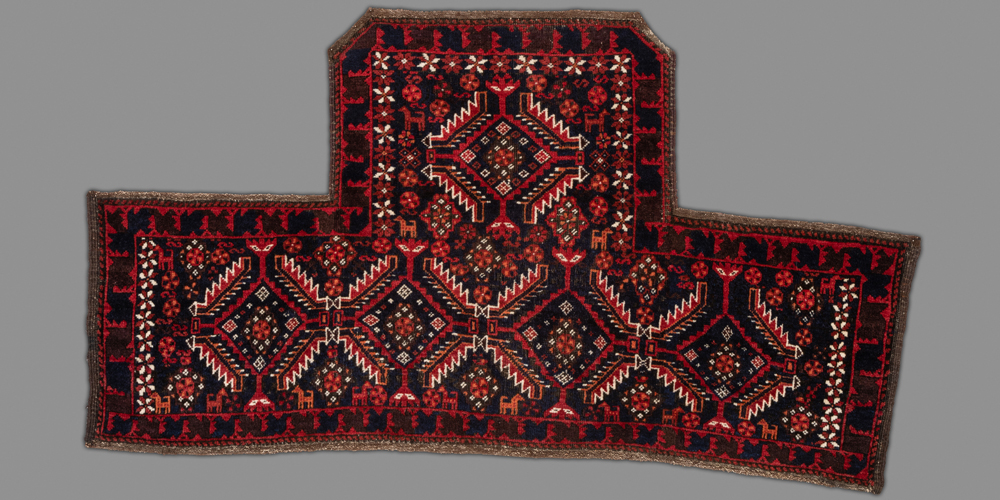 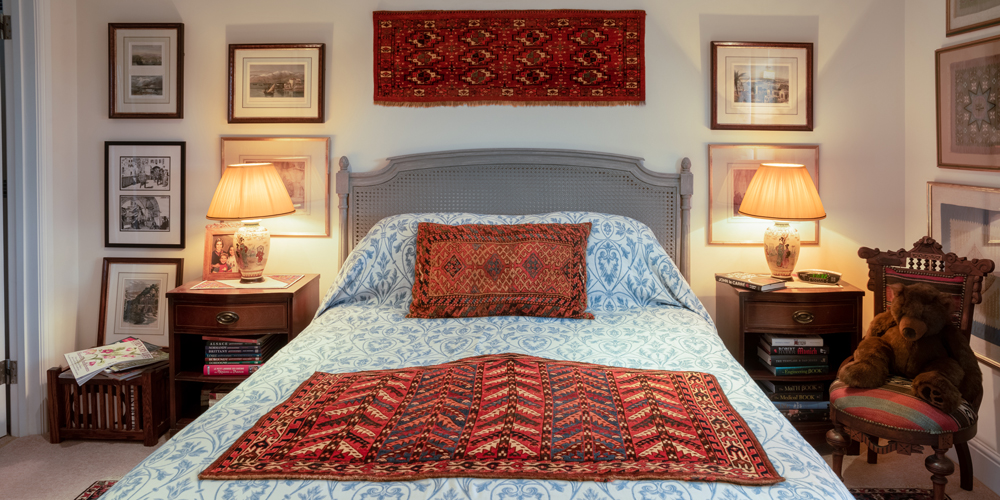 Arriving at the house in Broadway, I could tell immediately that I was in for a feast of rug and textile art. There were beautiful pieces everywhere, on the floors and walls, over the banisters, on furniture. During coffee, I admired a fine and extremely elegant early 20th-century Central Persian carpet with a ‘Shah Abbas’ design on the floor. My eye kept roving but came back to an exquisite silk Farahan pushti with a wonderful aquamarine field, truly a woven gem, draped over the back of a chair. The handle was fine and supple, with a texture like velvet. Above it hung a beautiful late 19th-century Melas rug, one of the few Anatolian pieces in the collection. It augured well for the rest of the day. I was given the tour of the rest of the house. I liked a dated white-ground Shirvan prayer rug which took pride of place on the wall in the dining room, and as we wandered from room to room, I would catch a glimpse of a little gem, such as a Turkmen bagface or Persian pushti, lying tastefully on a cabinet or side table. Bell is an affable and charming host, and was clearly enjoying presenting his pieces and discussing them. There was often a story associated with how a piece was acquired. 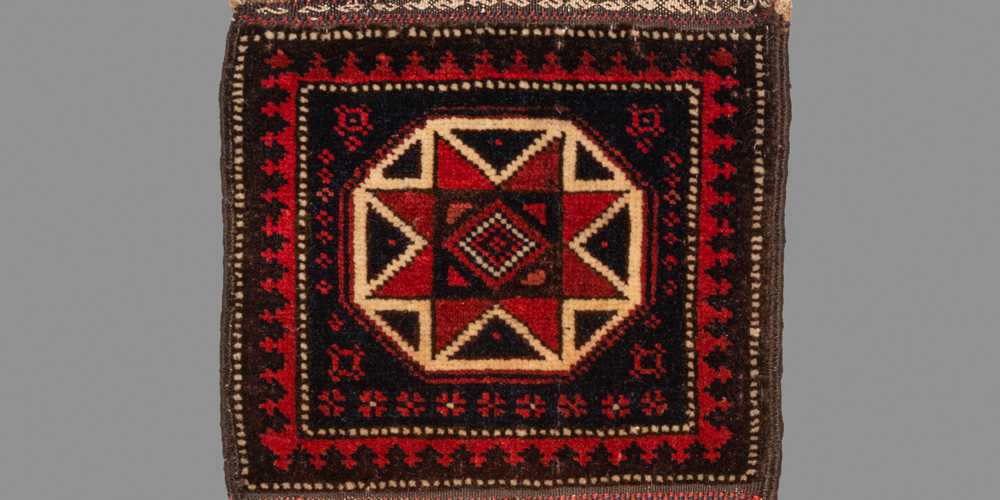 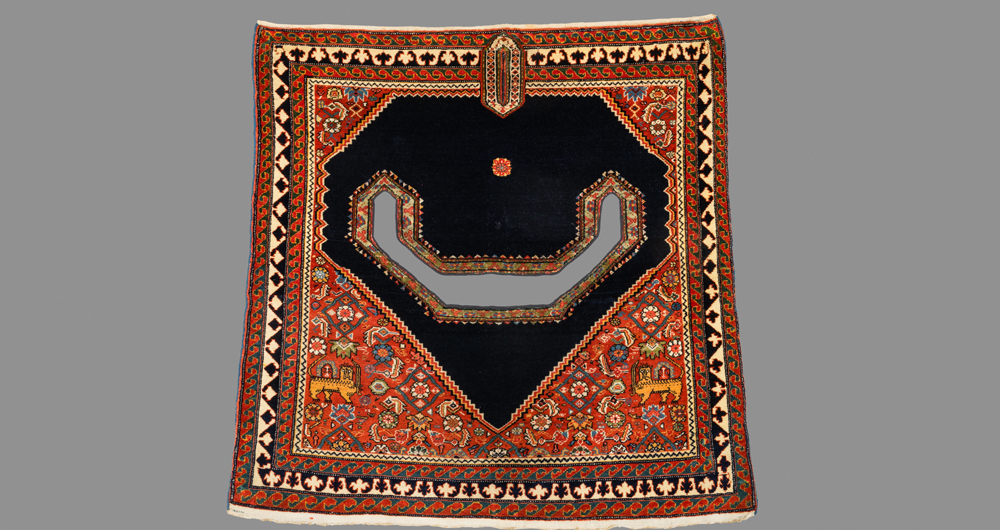 Why and how did Bell mutate into a collector? He talked about his early days in Canada where he became close to rug dealers such as Yeremian and Aliman. He educated himself, and also travelled to London regularly for work, where he came into contact with the likes of Raymond Bernadout, Julian Homer, David Black and Clive Loveless who were actively developing the appreciation of tribal rugs and textiles through exhibitions. At the time his main interest was in Persian tribal weavings, especially Baluch and southwest Persian rugs and bags, Turkmen weavings, and of course fine Persian pushtis. 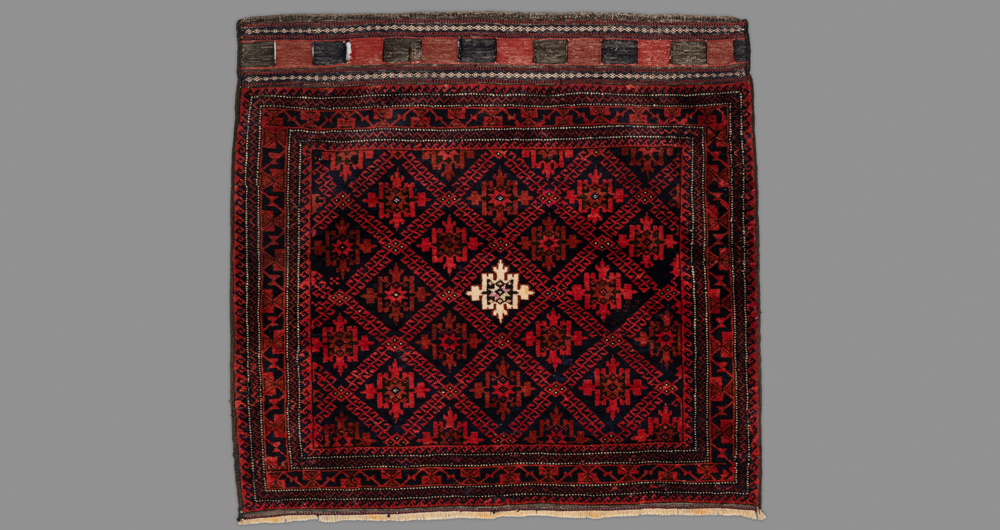 Bell is extremely engaging and has many opinions about origins and dating, but is generally conservative in his dating, and rarely didactic. When he expresses an opinion, it is spoken with authority and based on sound understanding. This is particularly the case with his exquisite collection of silk embroidered purses and slippers from Lebanon, many of which were found on his regular overseas trips. He is fluent in both Arabic and French, which came in useful during these adventures, and discovered the precise locations where these items had been woven, namely the workshops of Zouk Mikael, Mount Lebanon. He even knew the actual silk factory in a small village called Bsous where there is now a private silk museum. These items would then be sent to the markets in Istanbul and Aleppo for finishing. 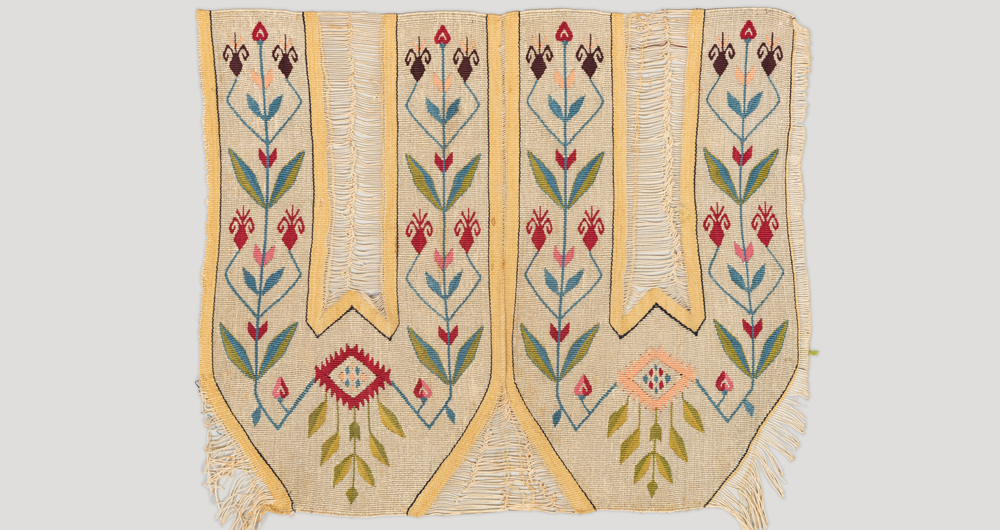 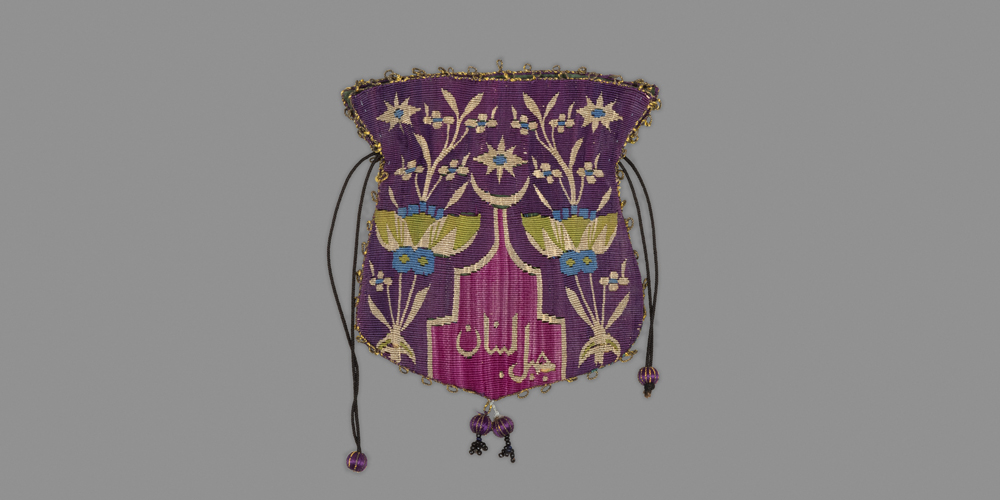 Although passionate about many pieces, it is clear that the process of collecting—searching, discussing, comparing, negotiating and finally acquiring an item—excites him. Asked which are his favourites, he is reluctant to commit. There are so many good pieces to choose from. But the items hanging in his study are perhaps a clue to the ones he prizes most. There is an early white-ground Qashqa’i bagface with archaic drawing and a highly unusual border behind his desk,as well as a beautiful fine Sehna saddle cover with two ‘Lions and Suns’, the national emblem during the Qajar period, and a symbol of Iranian identity. I admired a smart pair of 19th-century Baluch ‘Bird’ bags, but the room is dominated by an extremely rare and striking early 20th-century Baluch piled saddle rug, which he attributes to the Salar Khani. 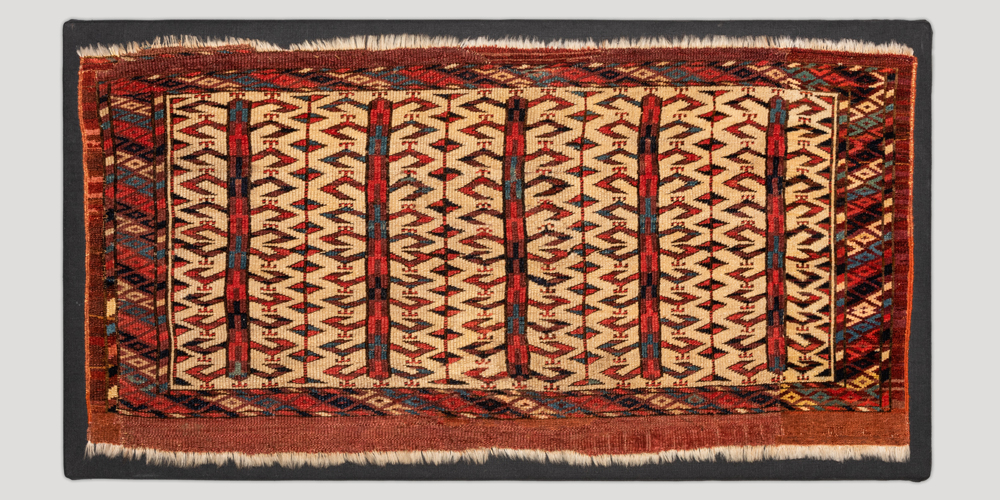 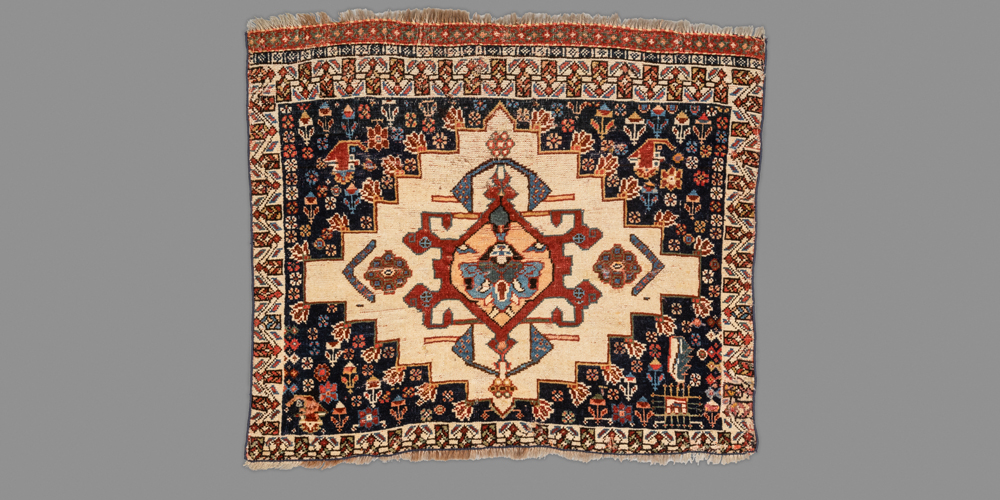 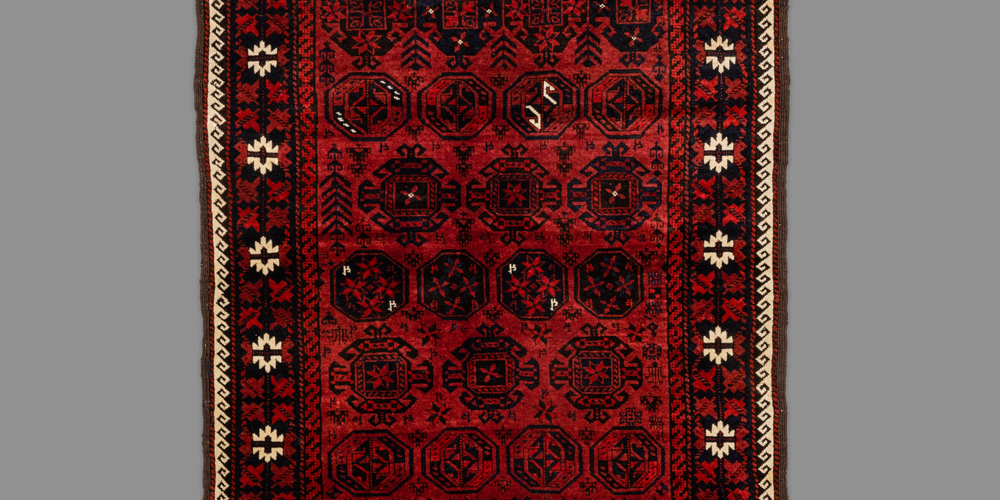 Another important area of interest is Turkmen weavings, and once again he has accumulated an impressive number of pieces. He showed me several outstanding examples, including a fine Tekke wedding rug, several very good Yomut mafrashes, and an exceptional Arabachi chuval with great colour. Among the earliest pieces is a ‘Karadashli’ (Yomut) torba, which turned up recently in a small auction in the English countryside. It is an extremely rare example with a row of stylised trees on an ivory ground and would enhance any Turkmen collection. We both took heart from the knowledge that great pieces could still be discovered in unexpected places. 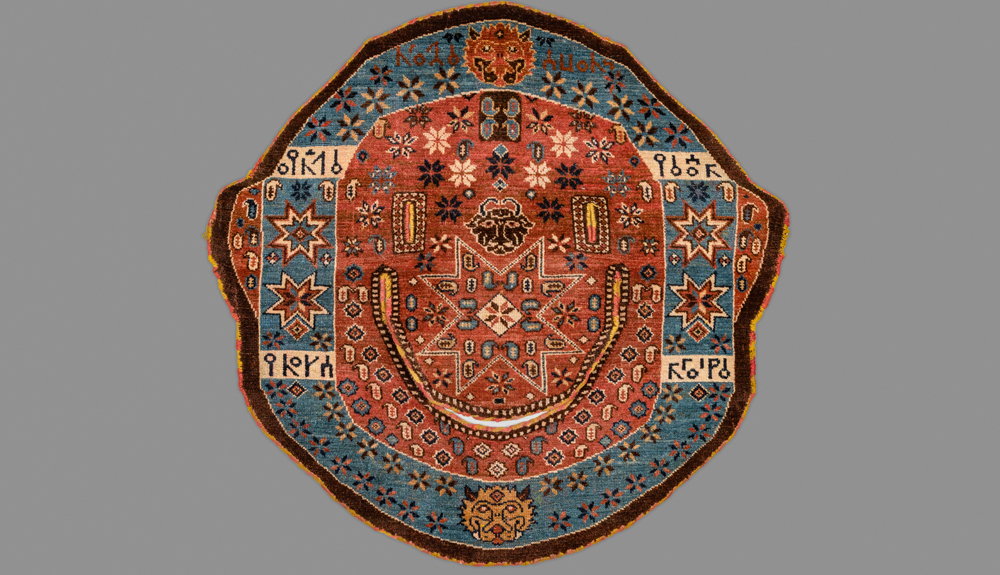 I asked him what advice he would give to young collectors developing an interest in the field. He spoke about the importance of studying around the subject, looking at art-historical sources, and handling as many pieces as possible. Visiting specialist auctions and fairs was helpful too. But most importantly, he recommended every young collector to find a mentor to guide him or her, be it a dealer or a collector colleague. A mentor sharpens one’s aesthetic appreciation and helps to avoid pitfalls, although we agreed that buying the odd mistake is part of the educational process. Bell followed his own advice. In his early days he relied on the personal relationships he developed with dealers around the world who would not only source things, but also teach him and advise him. He rarely bought anything directly from auctions. And this approach has continued up to this day.