‘Carpets and Textiles from Distinguished Collections’ at Sotheby’s in New York on 1 October 2015 is a compact sale – just 194 lots – full of old friends of good quality and provenance.

Perhaps the oldest friend of all is the cover piece, lot 68, the so-called King Umberto short ‘Polonaise’, here listed as a consignment from ‘a renowned private collection’, and estimated at a cool $800,000-1,200,000. The smaller of two grand Esfahan silk and precious metal thread rugs that once belonged to King Umberto II of Italy, it last appeared on the open market more than three decades ago, at Sotheby’s in London on 17 October 1984 (lot 319), when it sold for what was then the almost unimaginable world record sum of £198,000, almost a quarter of a million US dollars (HALI 25, p.81). But even given its quality, condition, colour, and provenance, this time around it will be difficult for it to come close to the present record for the type of $4,450,500, set by the Duke/Rainey Rogers Polonaise at Christie’s in New York in June 2008 (HALI 156, p.27). 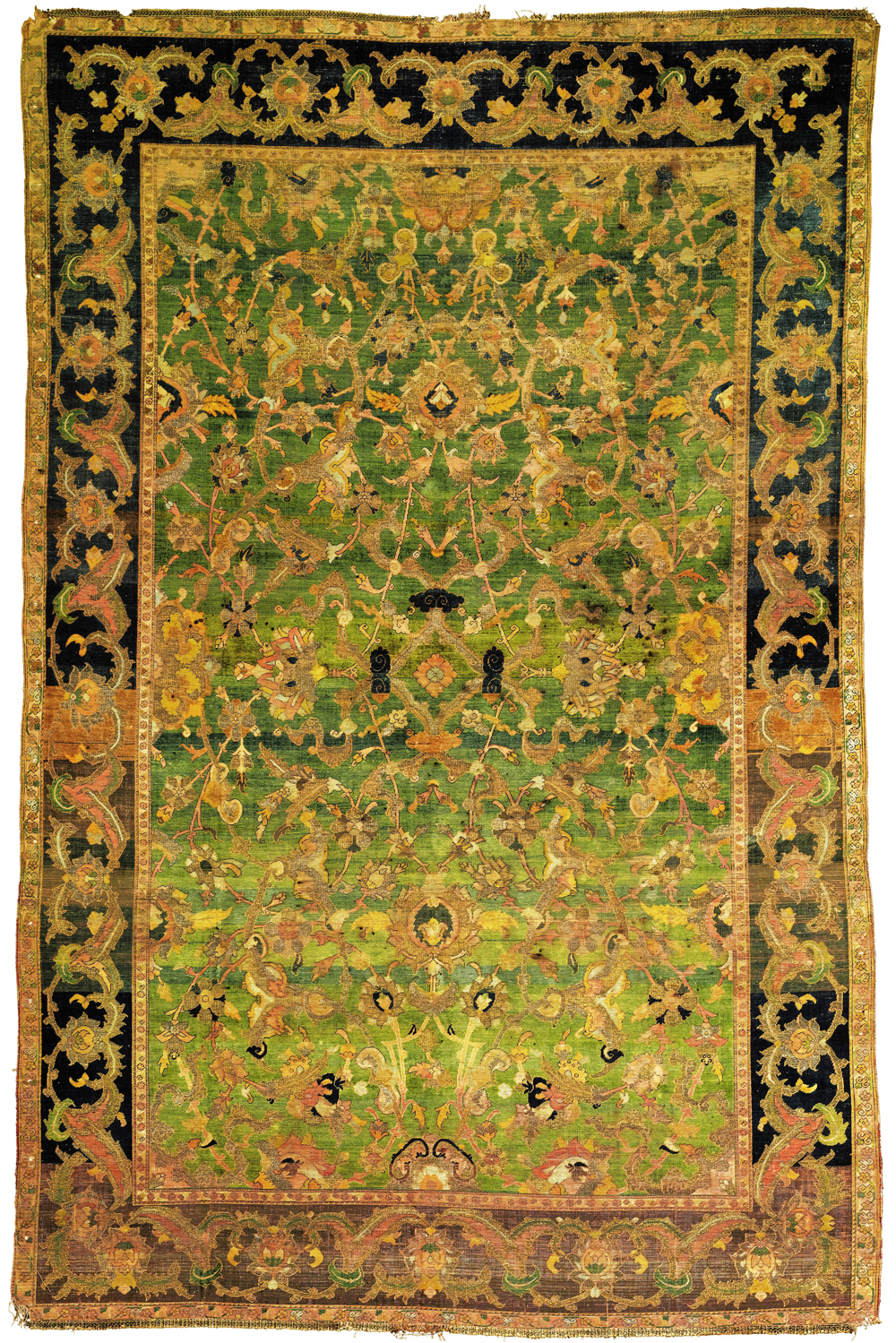 The auction opens with a group of fresh-to-the-market Uzbek suzanis from a Russian collection (lots 1-7), of which the most visually arresting is a piece with a bold centralised floral design, that in its style and technique clearly demonstrates the continuity between ‘conventional’ Shahrisyabz embroideries and their ‘Lakai’ subset (lot 7, estimate $8,000-12,000). 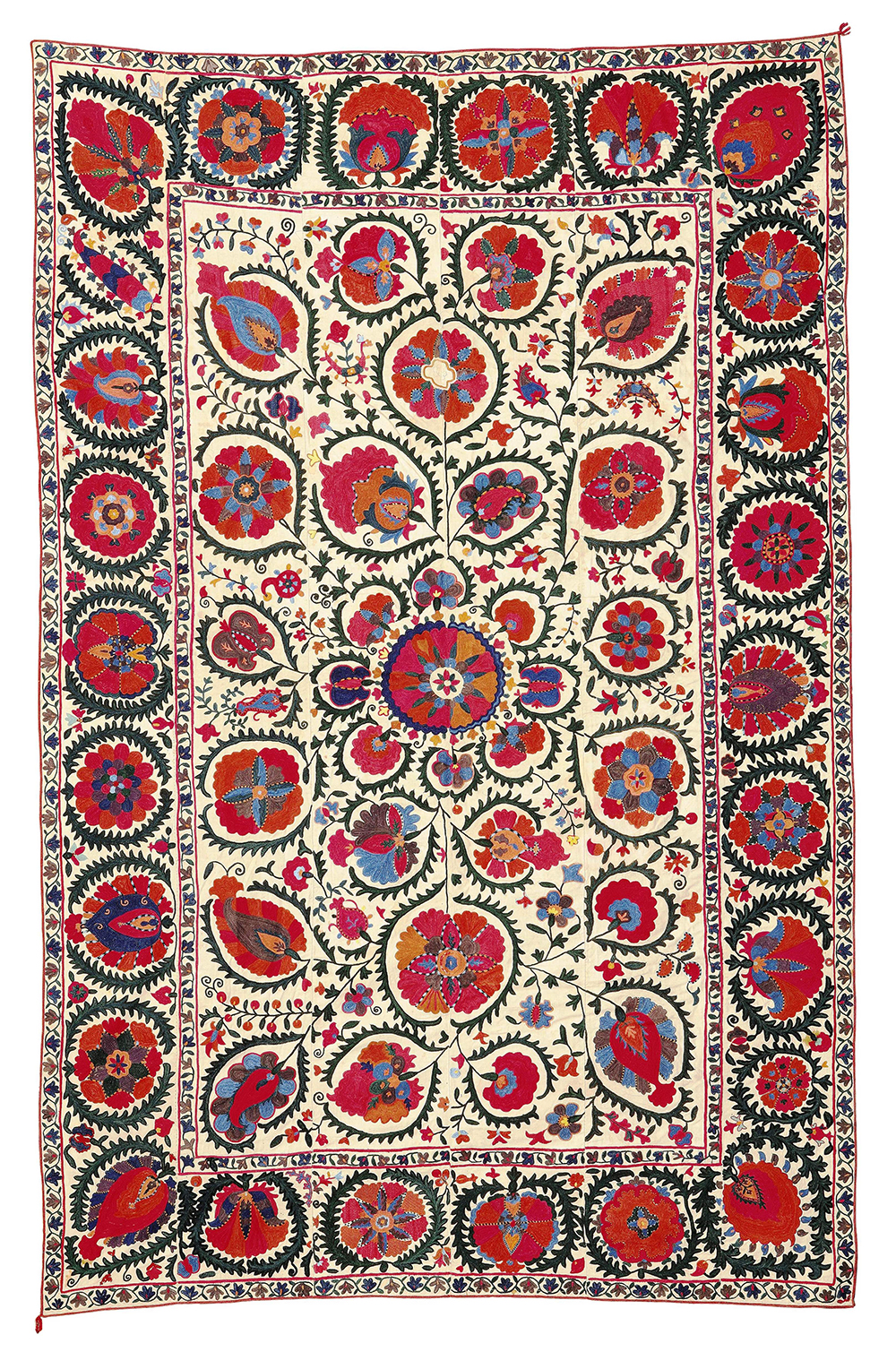 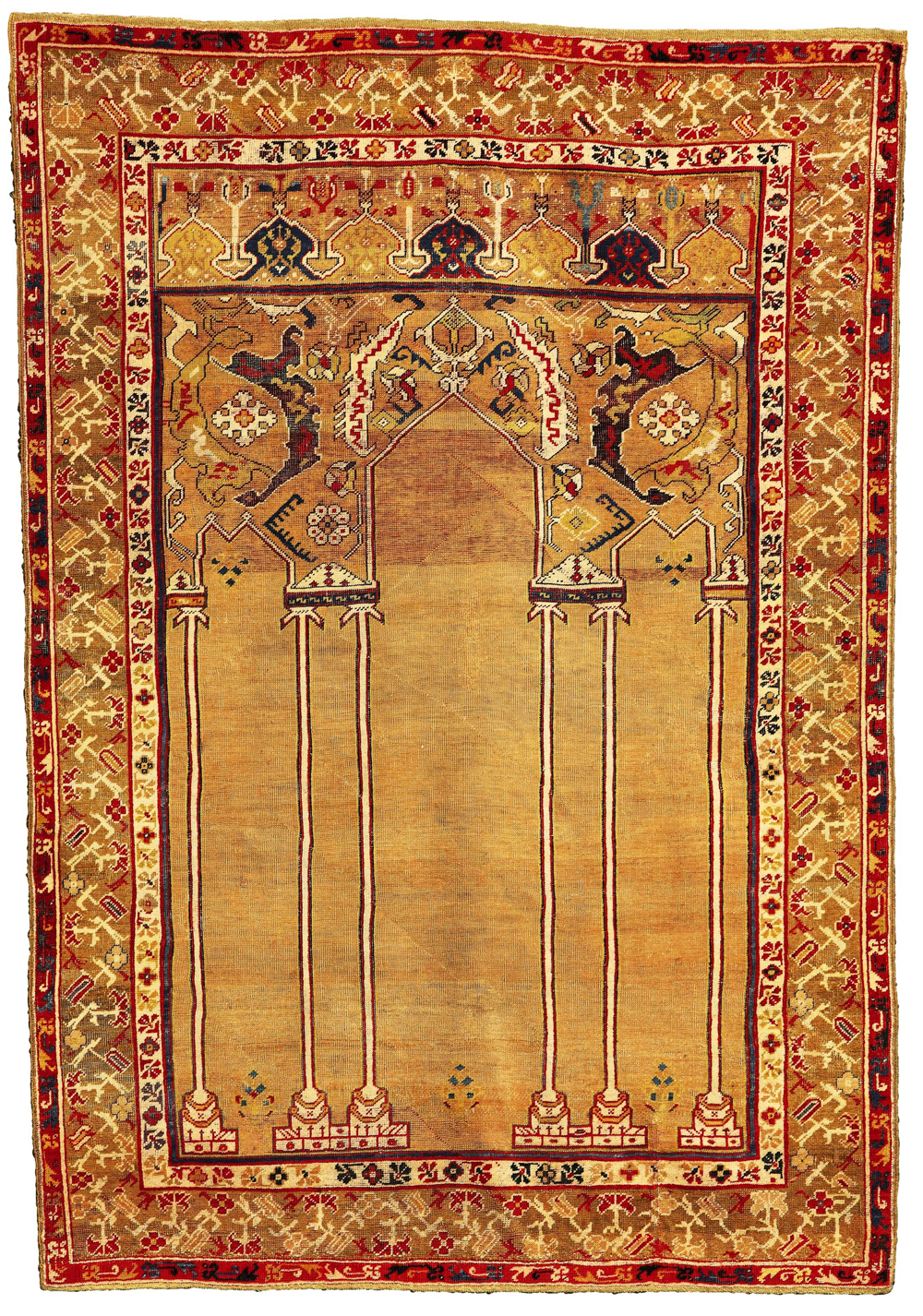 Lots 50 and 51 are both 17th-century west Anatolian prayer rugs from the collection of Thomas and Gwen Farnham, estimated at $20-30,000 and $30-50,000 respectively. The latter is reputed to have once belonged to Stefano Bardini in Florence, and later to Hagop Kevorkian, as well as Eberhart Herrmann and The Textile Gallery, and has passed through the auction market at least four times over the years: 1924, 1926, 1972, and most recently, March 1990, when it sold for $76,320 at Sotheby’s in London. Also consigned by the Farnhams is lot 66 (estimate $40-60,000), the ‘French & Co. Salting’ rug, an inscribed, composite, silk foundation Safavid carpet fragment, which had been exhibited by Arthur Upham Pope at the art Club of Chicago in 1926.

Lots 69-199 are a substantial mixed bag of Persian, Kurdish, Caucasian and Chinese rugs and flatweaves (plus one Ottoman çatma panel) consigned by the ubiquitous Seattle collector James D. Burns. There are many familiar faces, as at least seventeen of them (Persian classical, town, village and tribal pieces) are published in his 2010 book Visions of Nature. The most ‘important’ of these, and arguably the most beautiful, is the 17th-century Kelekian Kerman Vase carpet fragment, lot 98, estimated at $150-200,000, which was first published by Gaston Migeon in 1909, and subsequently came into the possession of the New York dealer Karekin Beshir and then the Anavian family collection. Beshir and the Anavians are also part of the pedigree of the final Burns piece, lot 99, a circa 1800 Gansu medallion and corners carpet on a dotted blue-ground pu-lo field, estimated at $25-35,000. 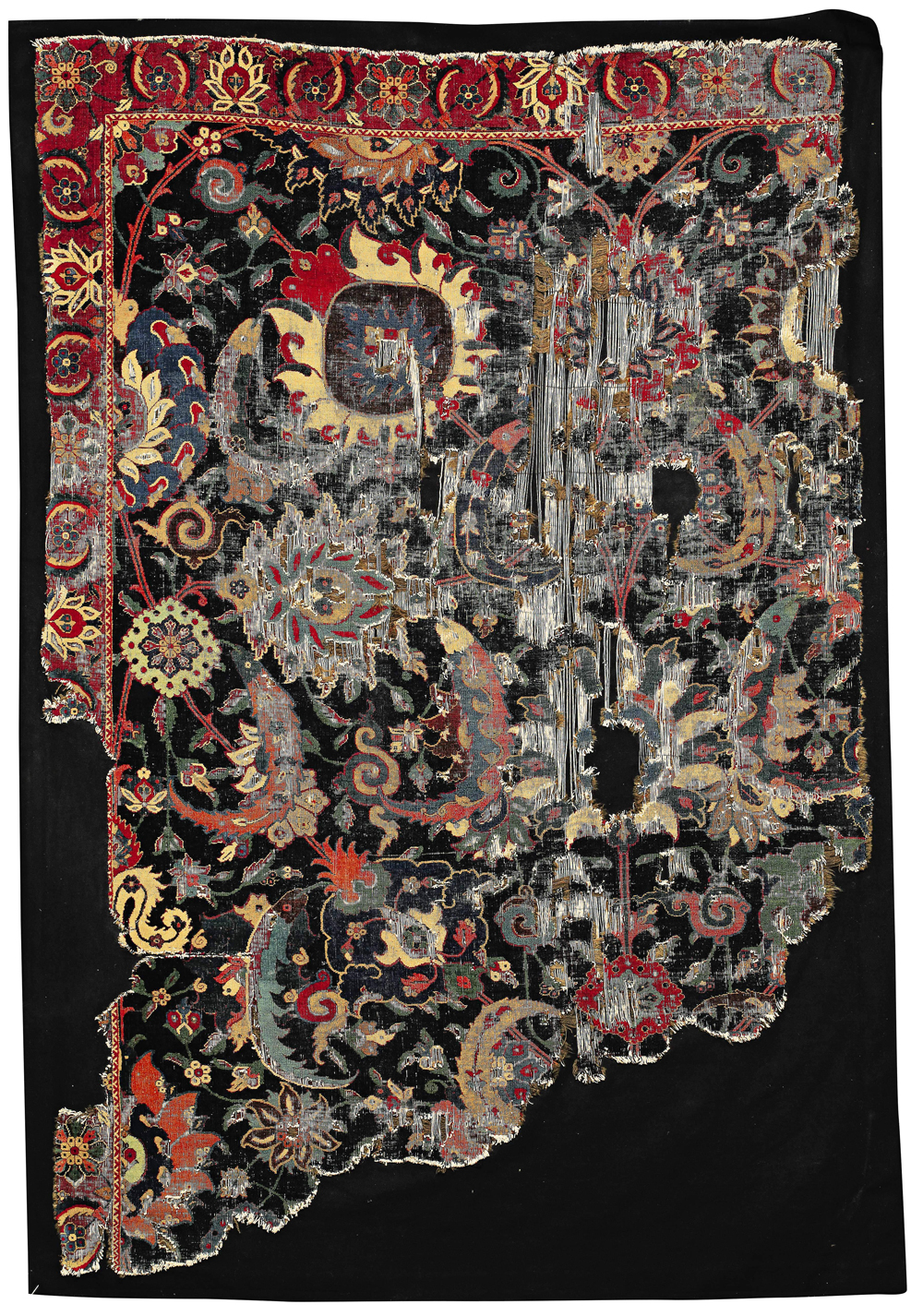 Following Burns comes a group of good antique Chinese and east Turkestan carpets, rugs and runners consigned by ‘An American Lady’, whose identity should be no secret to anyone who attended London’s Grosvenor House fair during the 2000s. Among the best are a two classic Khotan carpets, lot 105, a three-medallion Khotan, estimated at $15-20,000, and lot 106, with the ‘coffered-gül’ design, expected to make $25-35,000.

The final named consignment in the sale comes from the estate of the well-known and widely respected New York dealer Berdj Abadjian, who died in 2008 (lots 138-194). The pieces cross the range of types, from a Cairene medallion carpet (lot 152, estimate $30-50,000) and small ‘Transylvanian’ style Lotto, via a late classical Smyrna Ushak and a Kula prayer rug to a whole stack of good quality 19th and early 20th-century Caucasian, Persian and Indian decorative carpets. 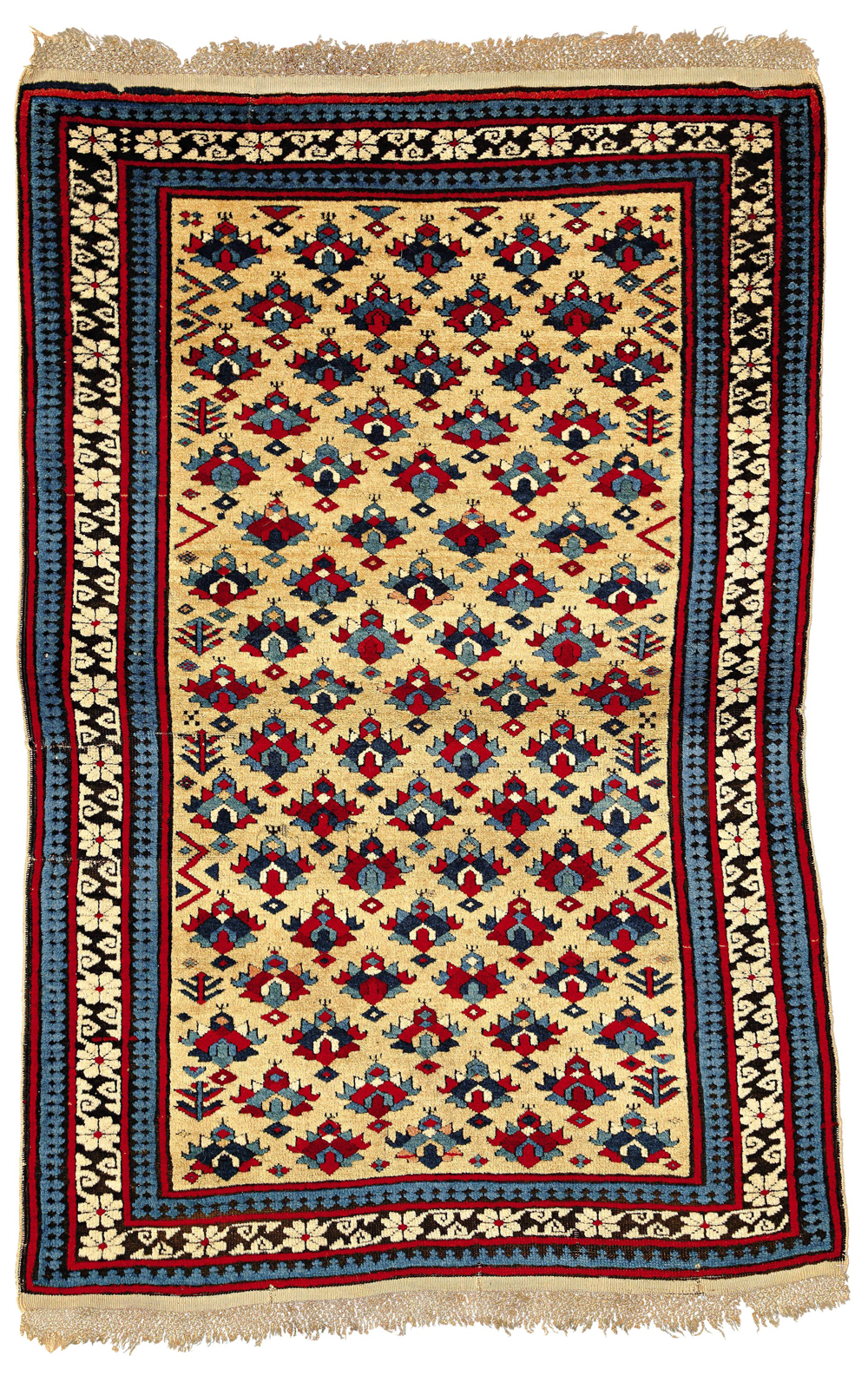 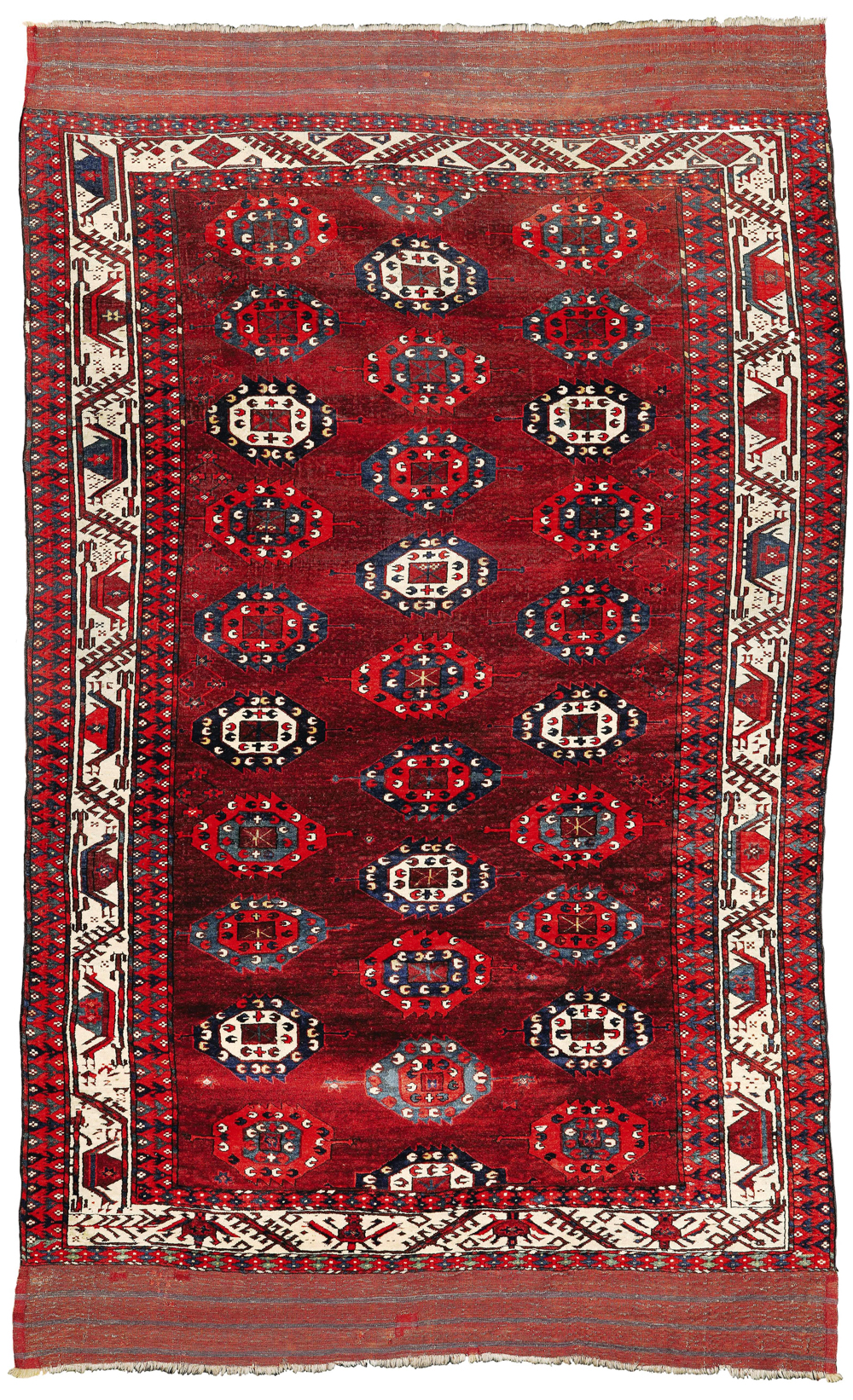