The late British painter and printmaker Sir Howard Hodgkin, whose wide-ranging collection is to be offered by Sotheby’s in London (‘Portrait of the Artist’, Tuesday 24 October 2017), is best known for what the auctioneers characterise as a ‘dialogue between colour and form’. This interplay is evident not only in his work, but also in the beautiful objects of many types with which he surrounded himself. Among them are numerous fragmentary classical oriental carpets and textiles, as well as European tapestries, almost all of them properly mounted, which were hung or propped, juxtaposed with other works of art of all kinds, in his studio and home. 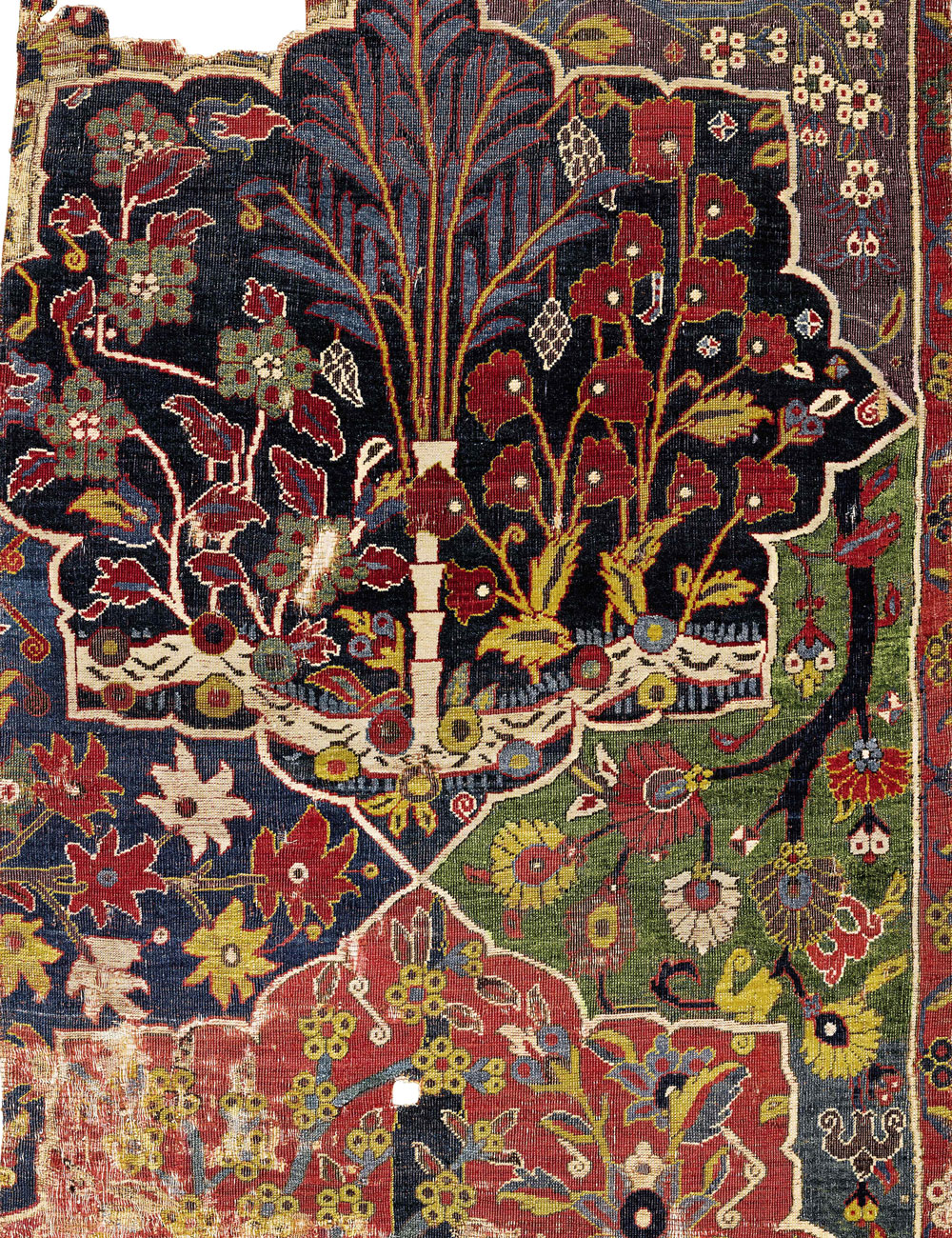 The best-known historical carpet from the painter’s collection is a quarter section of the famous 17th-century northwest Persian garden carpet originally from the Robert von Hirsch Collection, with a lengthy market footprint that includes Sotheby’s Parke Bernet, Alan Marcuson, Lefevre & Partners, and, serendipitously, Christopher Alexander (more of whose rugs will appear in the same rooms on 7 November 2017), who sold it in October 1998 at Christie’s in London for £56,500 ($96,110; HALI 102, pp.125-26). Another Von Hirsch quarter section, formerly in the Louise Woodhead Collection, was sold by her estate at Sotheby’s, New York in January 2014 for $221,000 (HALI 179, p.135). The present fragment is estimated at just £80–100,000, but given its beauty and importance could reasonably be expected to make more. 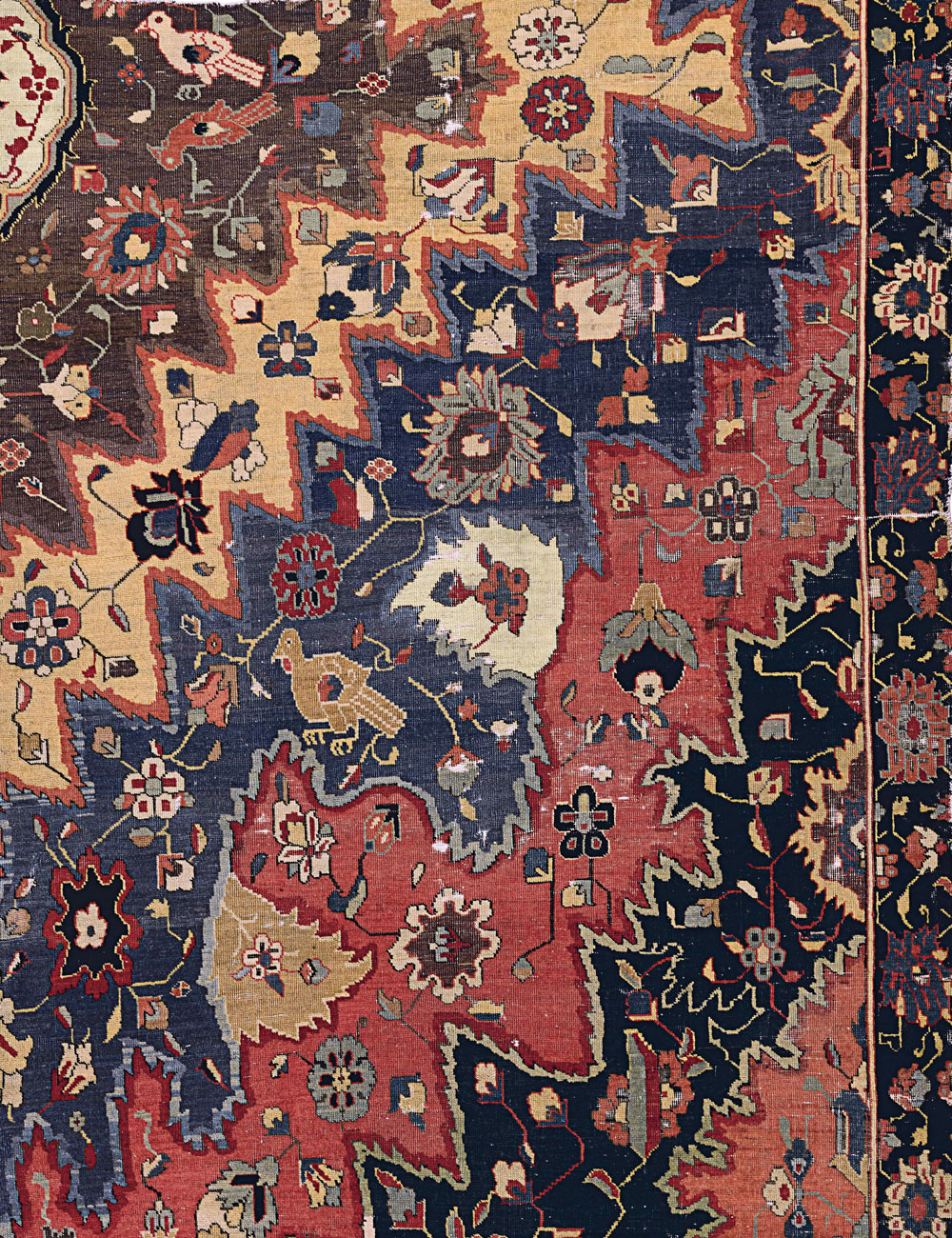 Of more or less equivalent size, period and colour balance is a bold jufti-knotted fragment from the central part of a Khorasan ‘Portuguese’ design carpet from the first half of the 17th century, which is estimated at £40-70,000. The Persian element of the Hodgkin consignment includes another early 17th-century Khorasan field and border fragment (£2,000-3,000), and a miscellaneous group of 17th-century red-ground Esfahan fragments. One of these, with a palmette and cloudband design, was once owned by the esteemed Chicago dealer Bud Holland and is estimated at £8,000-12,000. Although cut and reduced, a pretty early 18th/19th century Joshagan (?) blue-ground carpet with a cypress and shrub design echoing Kerman carpets of an earlier period, is expected to make £3,000-5,000. 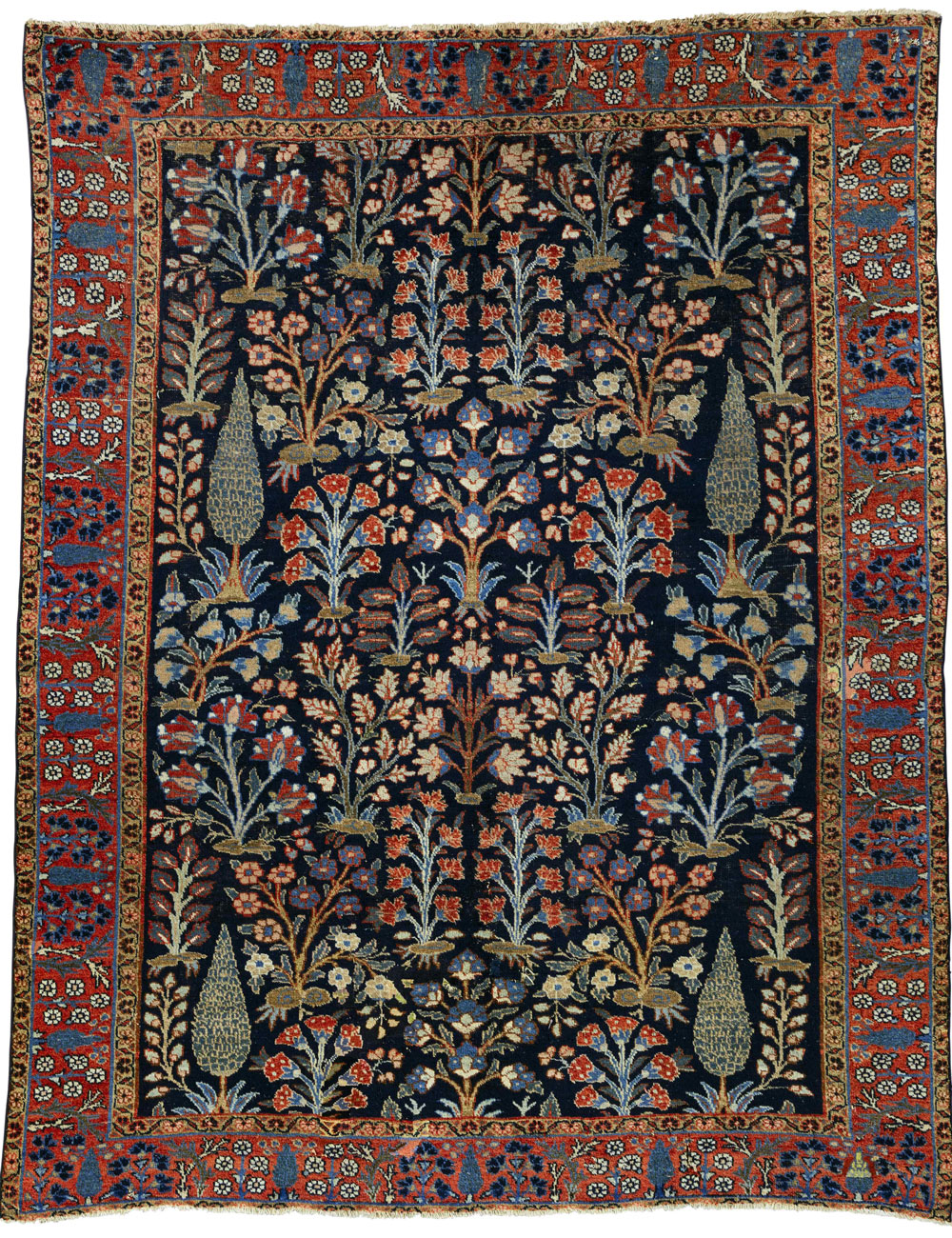 Hodgkin had close personal and artistic connections to the Indian subcontinent stretching back more than fifty years, and the sale offers both Mughal carpets and textiles. Included among them are three—of at least fifteen known—substantial fragments of a large and art historically important north Indian animal and palmette design carpet from around 1600. Two of the fragments, estimated at £7,000-10,000 and £8,000-12,000, show red-ground field sections with typical ton-sur-ton colouration, animals and floral racemes, while the third, estimated at £10-15,000, also shows part of the white-ground border of what was once a truly magnificent, massive, carpet (see Walker, Flowers Underfoot, 1998). Several other border sections survive in the Amber Palace collection in Jaipur. Also from India is a complete, albeit worn, 18th-century blue-ground millefleurs wool carpet with an implied floral lattice (£3,000-5,000), while Indian textiles include a 17th/18th-century Mughal gilt painted velvet niche with a single flowering plant (£5,000-7,000), and two fragmentary 17th-century painted and resist-dyed cotton qanat panels, at £10-15,000. 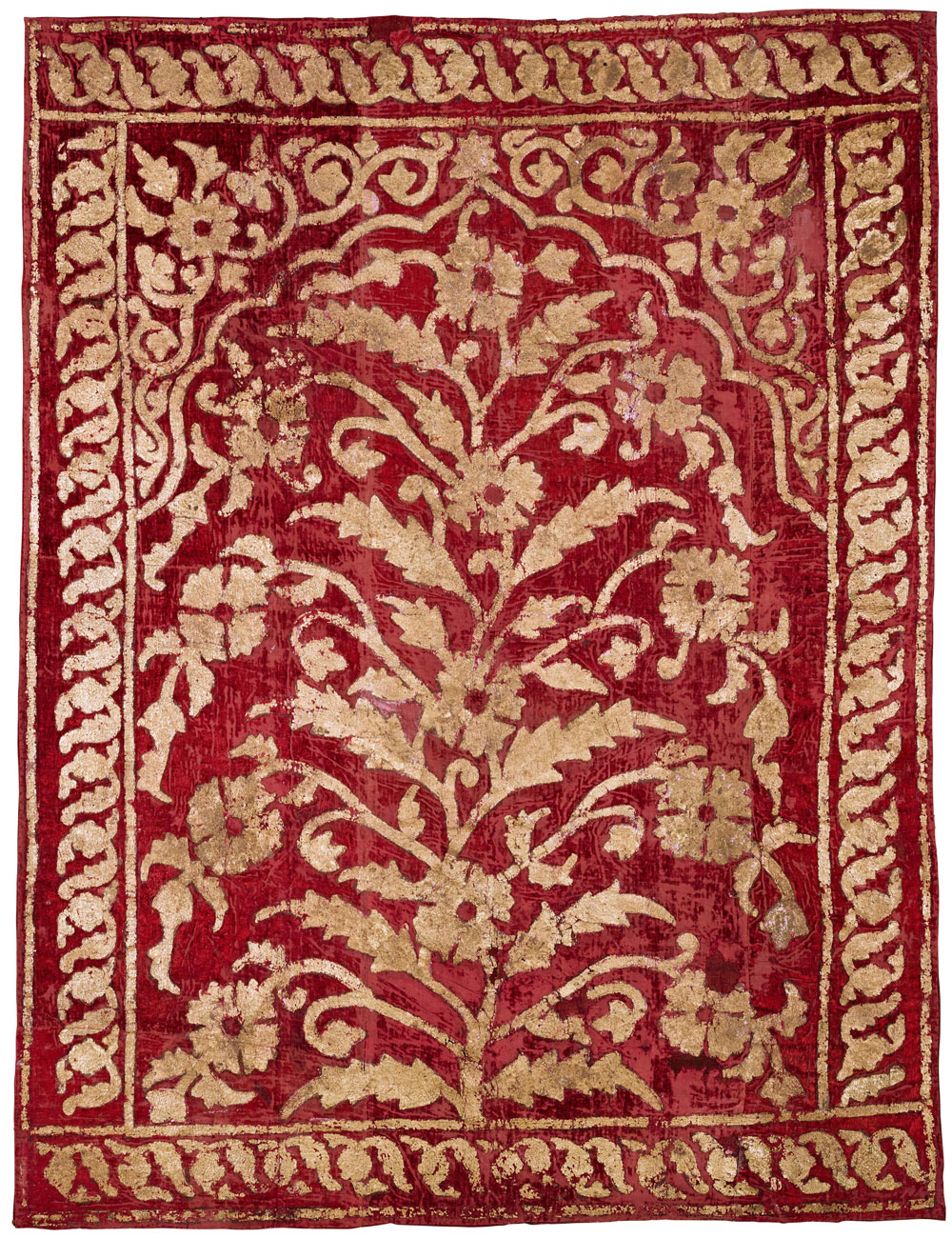 The Hodgkin consignment includes a late 16th-century single medallion fragment from an Ushak large-medallion carpet (£6,000-10,000), and two near identical single-niche fragments from a blue-ground Ushak saf of similar age. One of these was also formerly in the Alexander Collection, sold at Christie’s in London in October 1998 for £9,775, the other came from the Dr Jon Thompson Collection at Sotheby’s in New York in December 1993, for $43,700 (HALI 73, p.131). Each is expected to make £20-30,000. Additional sundry Ottoman and Italian period stuffs—silks and velvets—are included in a composite lot consisting of eight items, estimated at £2,000-3,000. 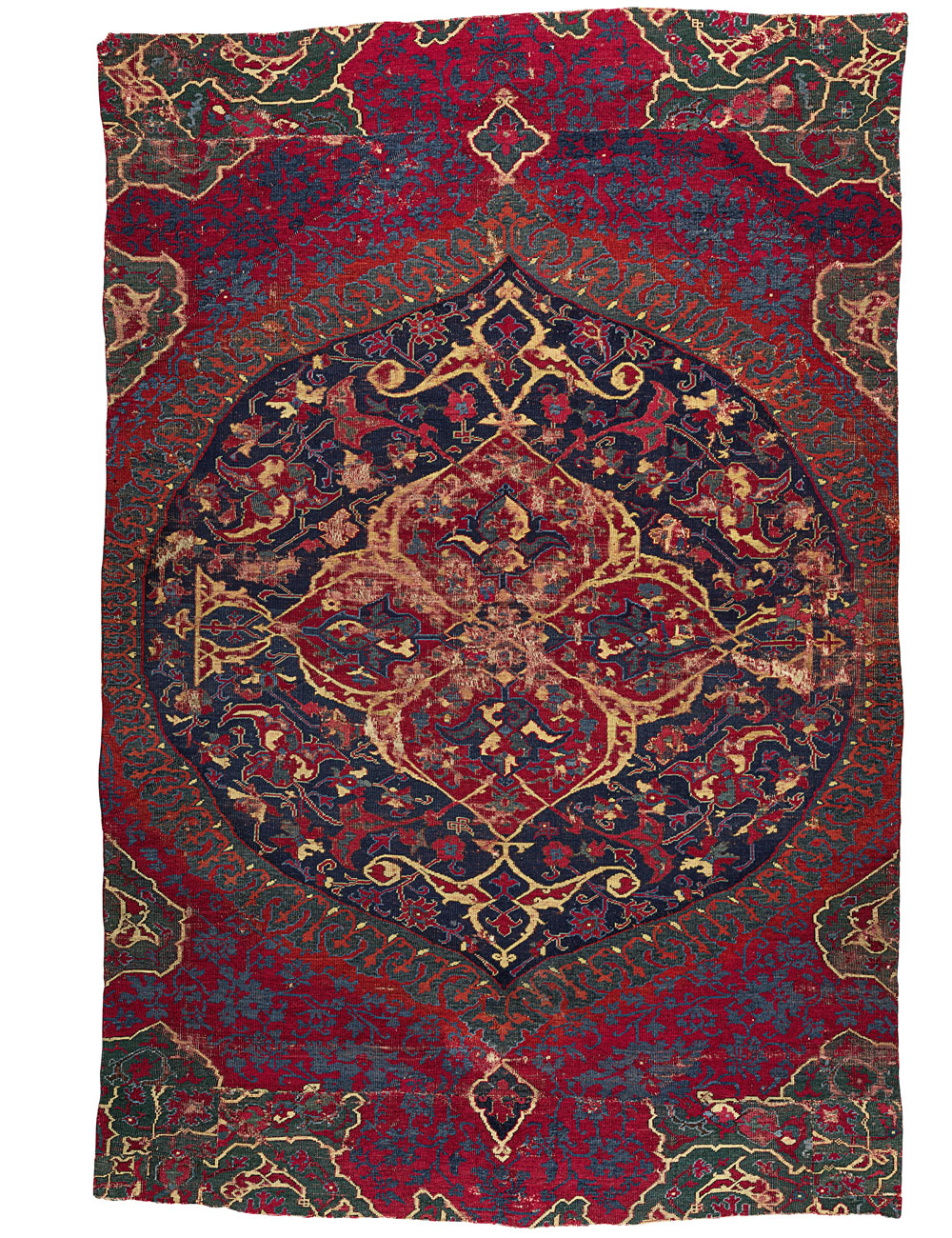 Of note is a rare, if not unique, 17th century Alcaraz flatwoven carpet from Spain with an angular palmette-lattice field, estimated at £8,000-14,000, and a fragment of an old blue-ground pomegranate design Yarkand carpet (£800-1,500). Finally, the sale also includes a modern ‘artist proof’ carpet, designed by Howard Hodgkin, hand-woven using Iranian wool in India in 2016 for a Christopher Farr limited edition, and being sold to benefit the Hepworth Wakefield (1,800-2,500). 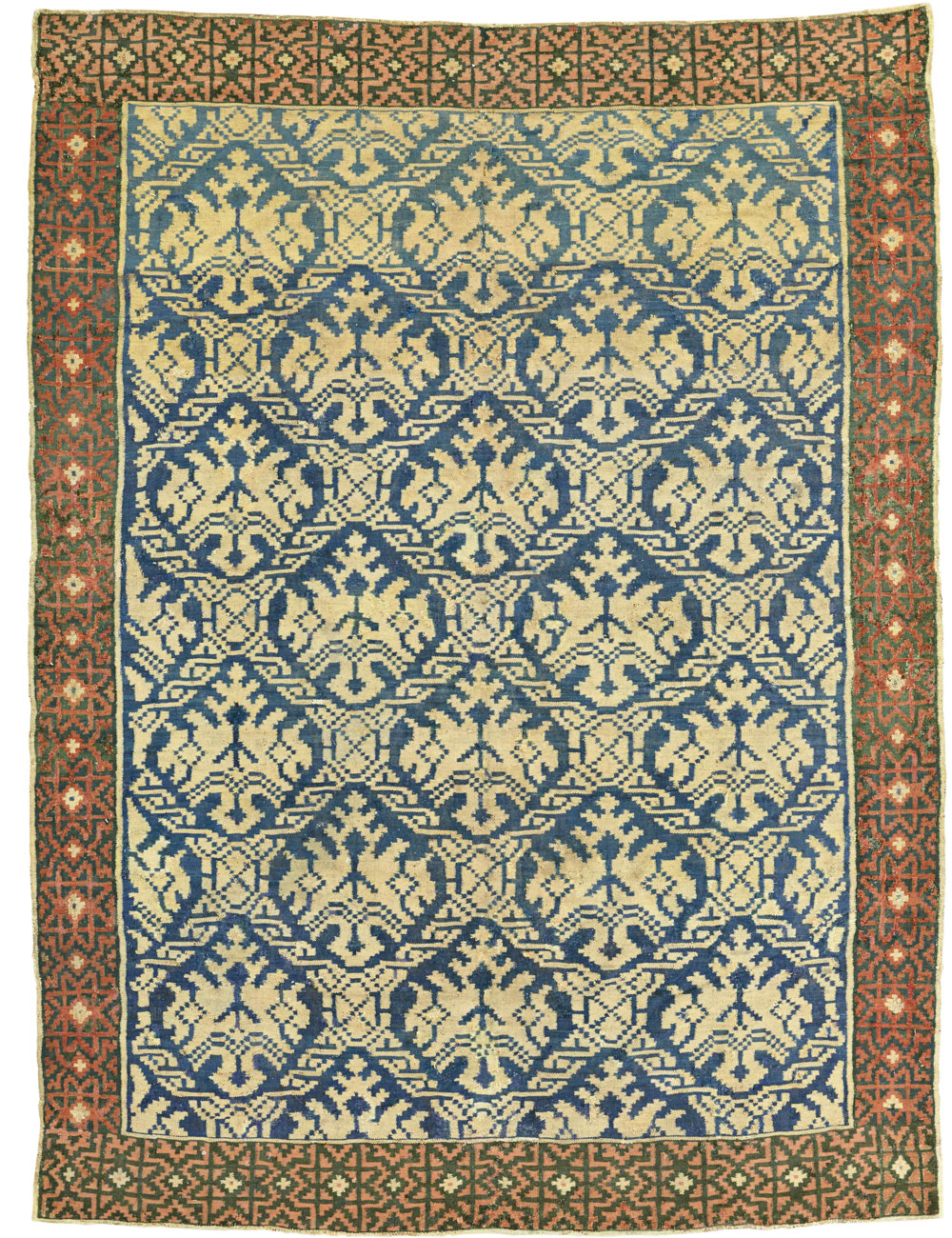 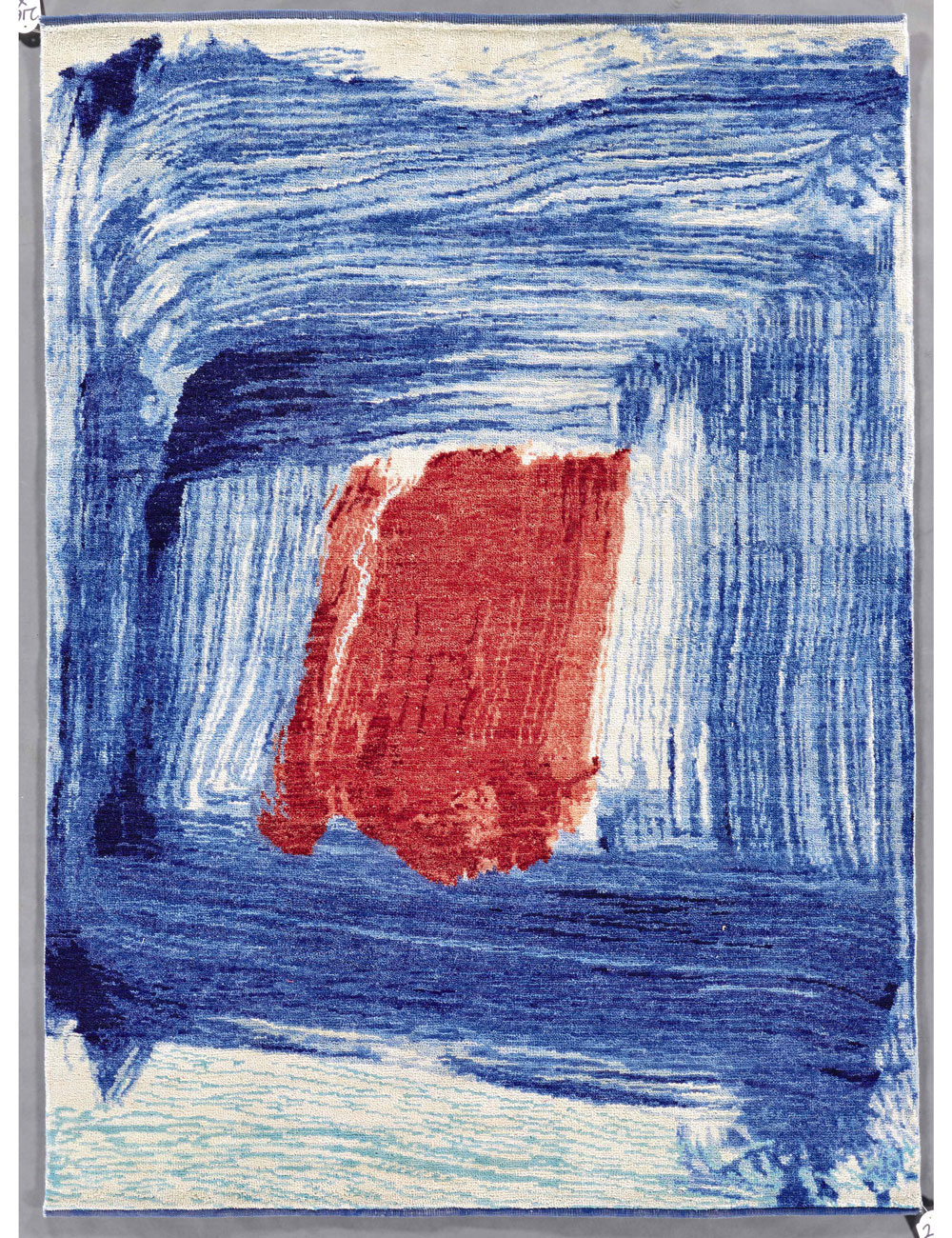