Return of a Champion: The Vanderbilt Indian Star-Lattice Carpet to be offered at CLO

In a welcome return to the saleroom, lot 50 in Christie’s London (King Street) carpet sale on 8 October 2013, the strikingly dramatic North Indian star and cross lattice pashmina pile carpet known as the Vanderbilt, is a former holder of the world record price for an oriental carpet at auction. Now estimated at £1.5 to £2 million, it could easily, in the present market for beautiful classical carpets of good provenance, make substantially more. 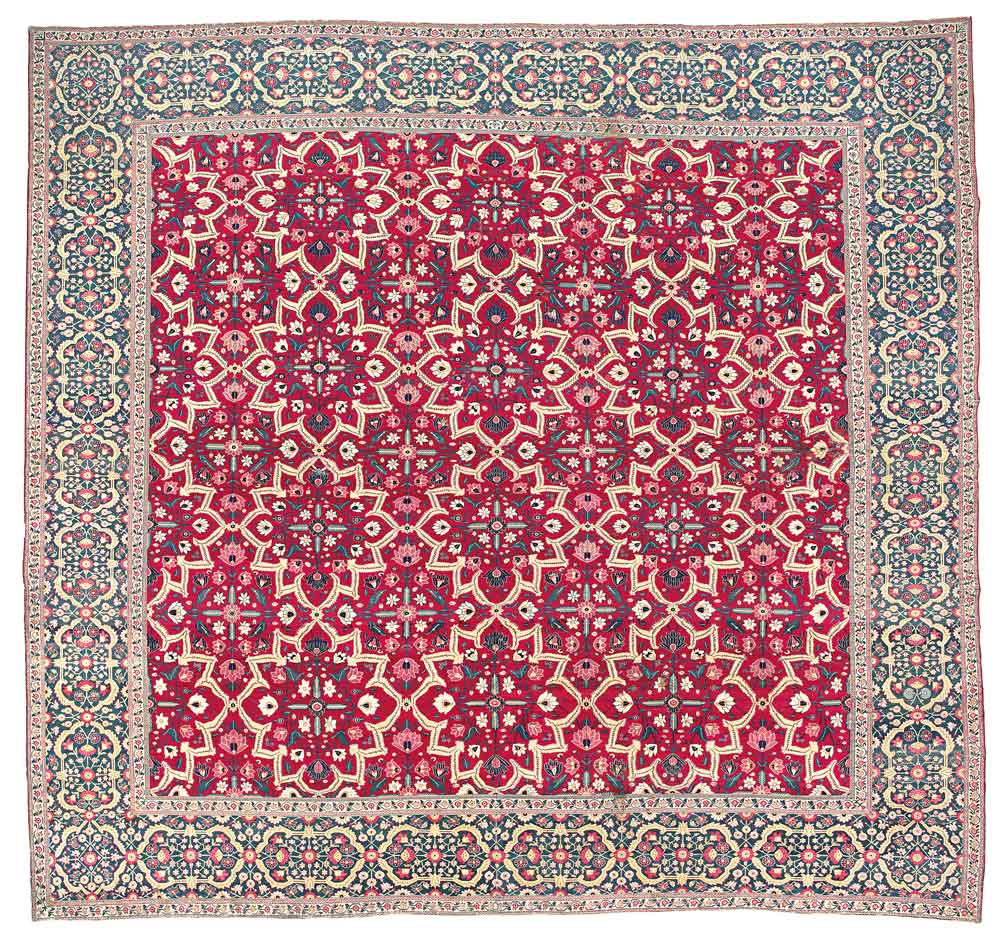 The Vanderbilt carpet is exceptional both because of its highly decorative, symmetrically balanced design and near perfect condition, and because it is a crucial art historical link between earlier 17th-century carpets of the classical Mughal period, and later North Indian court and commercial production. Most of its design elements have counterparts among classical-period North Indian carpets. Yet here those elements have been combined quite differently, to both a larger and smaller scale, and are supplemented with unexpected technical features.

Bought in Venice in 1878 by the American railroad magnate Cornelius Vanderbilt, it first decorated the walls of his Fifth Avenue mansion in Manhattan, before migrating to the family’s seventy-room Rhode Island ‘summer cottage’, The Breakers, in Newport, RI, which was inherited by Cornelius’s youngest daughter, Gladys Vanderbilt Széchényi. The carpet was removed from The Breakers for sale in 1977. In 1982 it turned up in France, where it was exhibited at the Centre Culturel de Boulogne-Billancourt, Paris, described in the accompanying French brochure as a 17th-century, pashmina-piled, Kashmir, millefleurs carpet. A colour illustration was published in HALI 4/3, 1982.

In October 1983 the carpet was offered in London by Sotheby’s, but was bought-in at £180,000 against a ‘refer department’ estimate. It did sell six years later at Rippon Boswell in Wiesbaden in November 1989 for $718,700, at the time the world’s highest price at auction for an oriental carpet, when it was published in HALI 49 in February 1990 and Oriental Rug Review December-January 1990. In April 1995 it was sold again at Christie’s New York for $992,500, just failing to be the first million dollar carpet at auction, and was published once again in HALI 81. 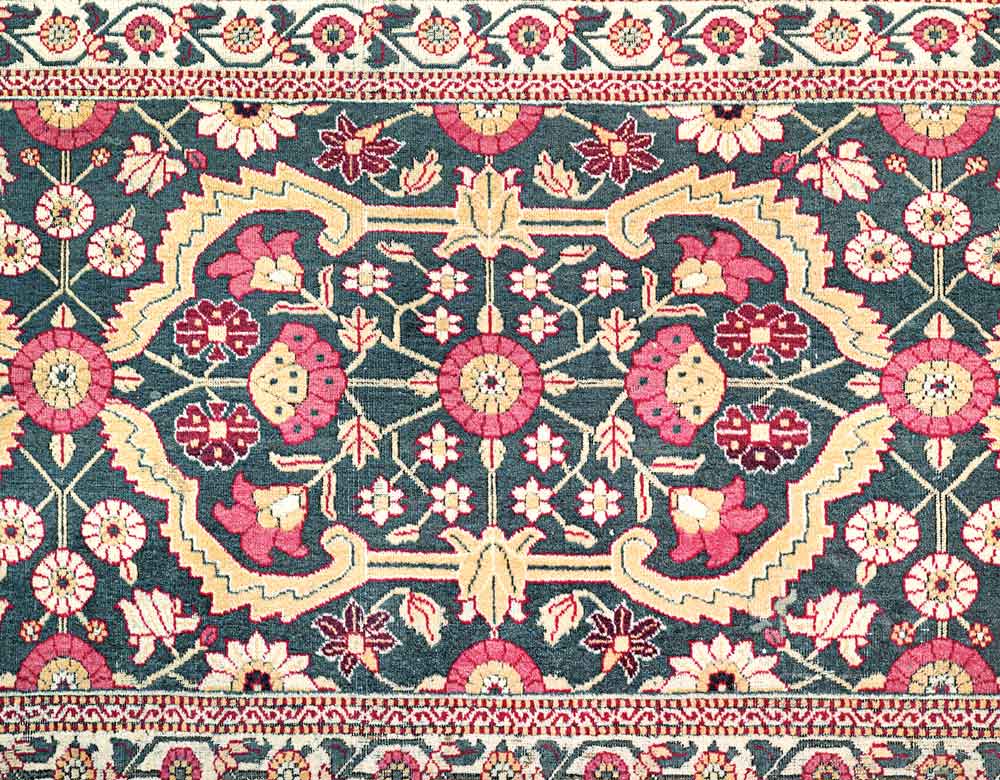 Perhaps unsurprisingly, each appearance in print has been marked by slight changes of ascribed provenance, date, material content and dimensions. The Vanderbilt Carpet  has been described as Mughal, North Indian or Kashmir by various authors and auctioneers; dated first to the 17th century, then mid-17th century, next late 17th century‒early 18th century (the current ‘consensus’), although on both art historical and structural grounds a date in the second half of the 18th century or later cannot be discounted. The Vanderbilt carpet has off-white Z6S multi-stranded cotton warps typical of North Indian construction, and three passes of Z2-3 blue cotton wefts which, when combined with a pashmina knotted pile, constitutes a small but distinct carpet type. Whether produced in Kashmir or elsewhere in Northern India, is stylistically and materially distinct from the 17th-century carpets associated with Mughal court production. 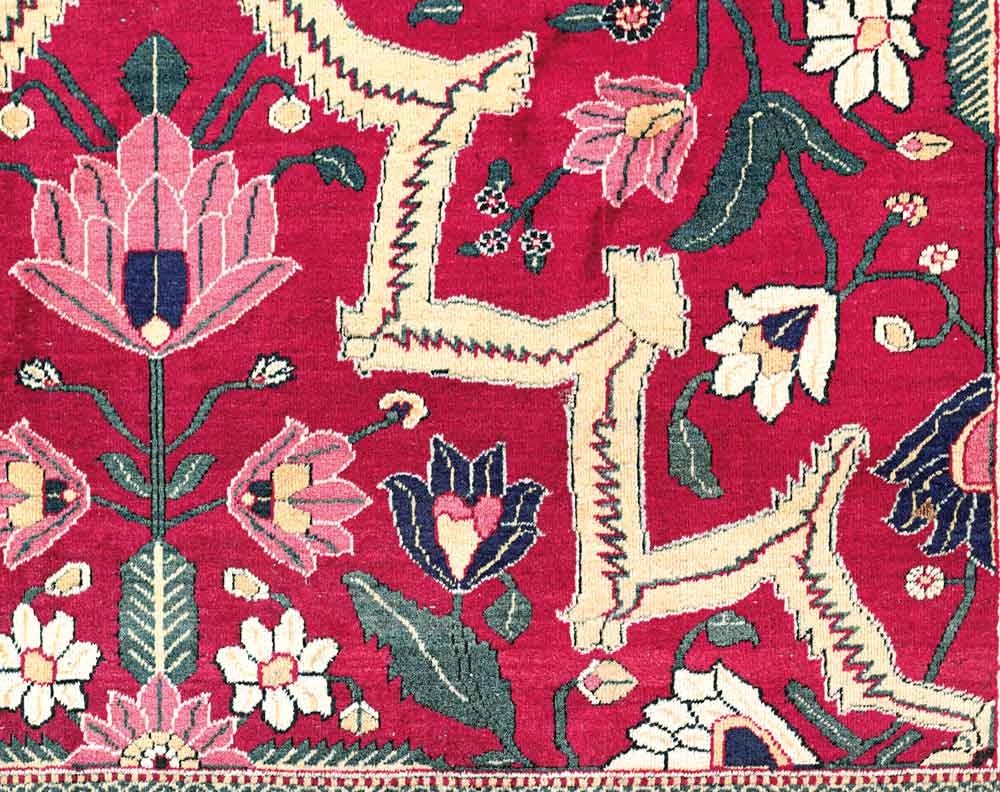