The Everlasting Flame: Zoroastrianism in History and Imagination is the first exhibition of its kind to provide an in-depth visual narrative of the history of Zoroastrianism, its cultural heritage and the influence it had on Judaism, Christianity and Islam.

The exhibition takes place in the Brunei Gallery, SOAS, on view till 14 December 2013. The main body of the installation consists of a walk- in fire temple, including a prayer room, inner sanctum and ritual precinct, that offers a unique opportunity for visitors who are not permitted to enter the fire temples of India and Pakistan.

Other noteworthy pieces include a reproduction of the British Museum’s 10-metre cast of the western staircase from the Palace of Darius at Persepolis detailing the lion and bull motif. From Iran to India the textiles, paintings, jewellery and furnishings from the 18th and 19th centuries bear witness to the role of Parsis in the China trade that included opium, silk and tea.

One of the world’s oldest religions, Zoroastrianism originated amongst Iranian tribes in Central Asia during the second millennium BCE and spread to Iran where it became the principal faith until the advent of Islam, and also to India. Central to the religion is the belief in a sole creator, Ahura Mazda and his emissary Zarathustra (Zoroaster). The Zoroastrian worldview includes the centrality of the opposition of good and evil; the belief that the world is a theatre of war in which these two forces would fight one another; the existence of heaven and hell after death; and the belief that the world as we know it will come to an end once Evil has been fully overcome.

The exhibition displays objects from major institutions that include the British Museum, British Library, V&A, State Hermitage Museum, Alpaiwalla Museum, Mumbai, Institute of Archaeology in Samarkand as well as loans from private collections. 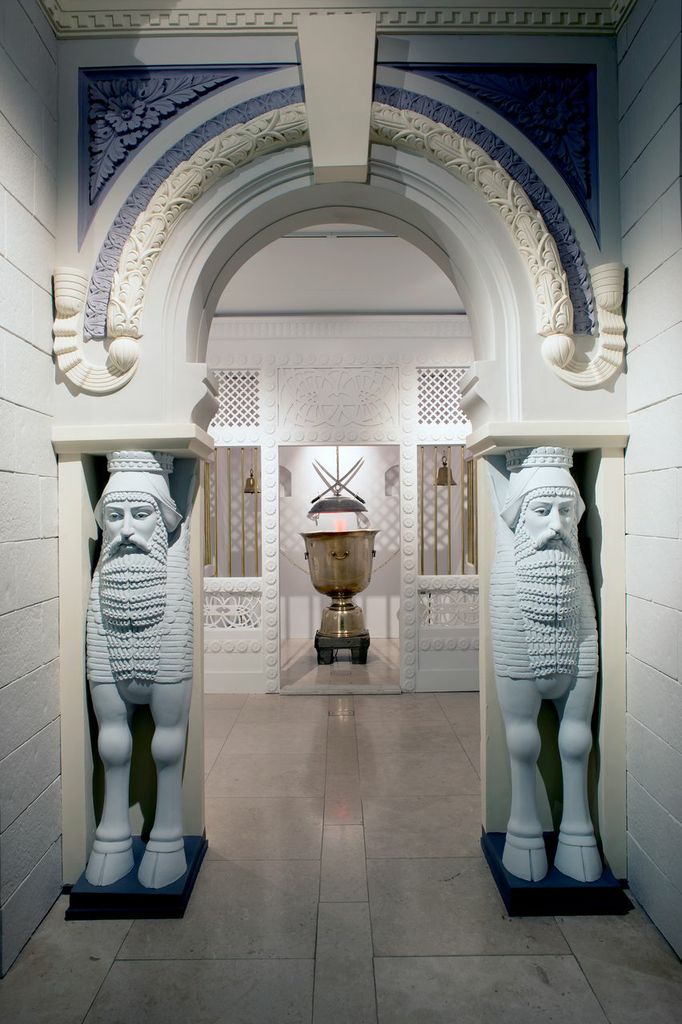 The walk- in fire temple, including a prayer room, inner sanctum and ritual area 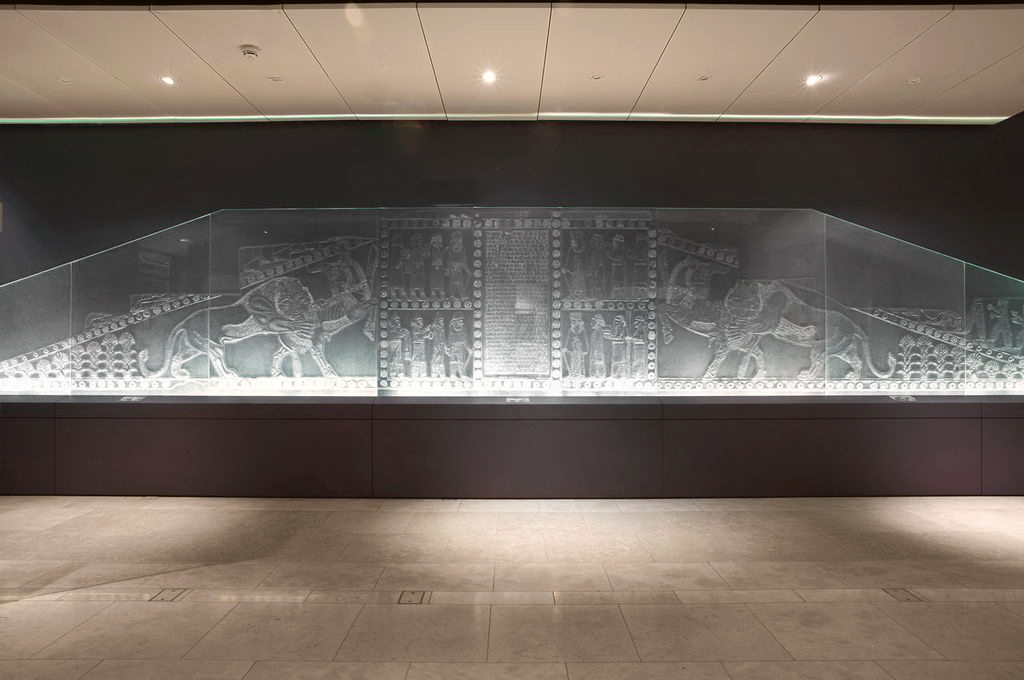 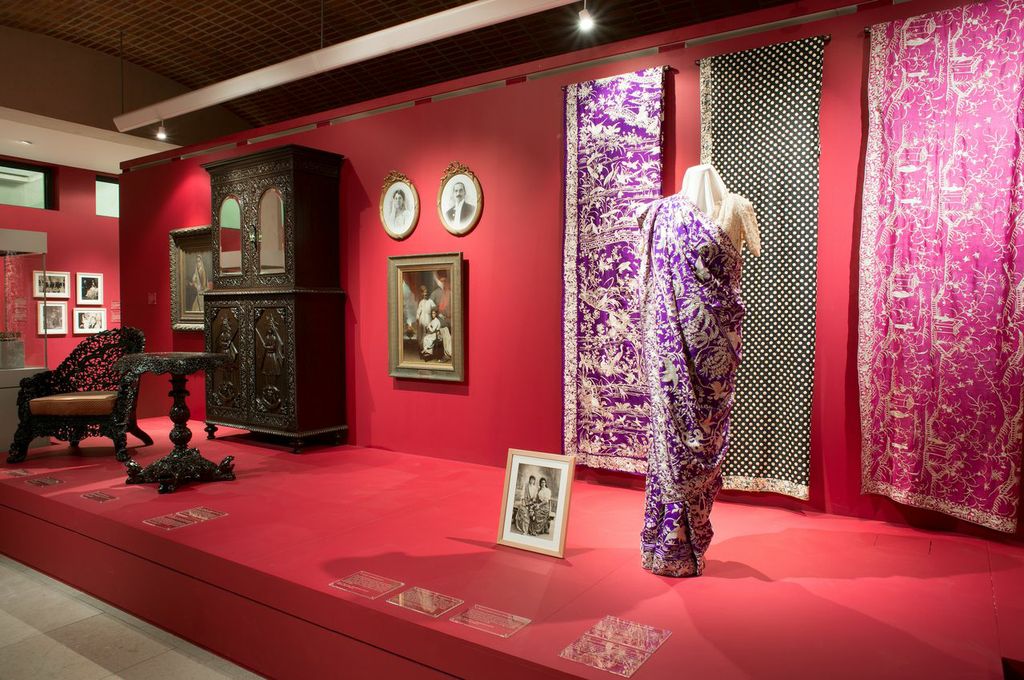 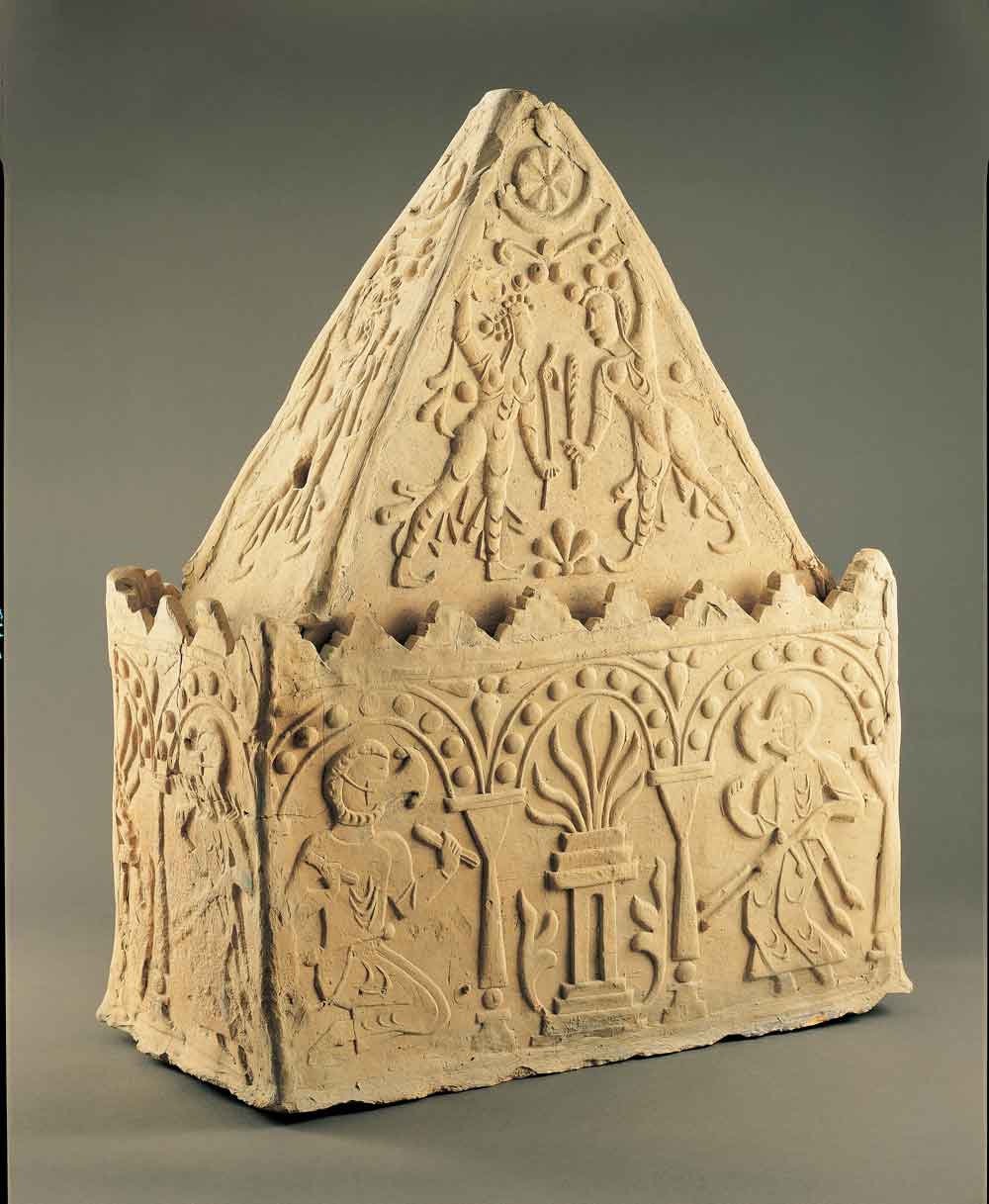 Ossuary from Mullah Kurgan, Samarkand Museum, Uzbekistan
The Mulla Kurgan ossuary was found by farmers near Samarkand, Uzbekistan. The lower register shows a Zoroastrian scene and the upper register a heavenly one. 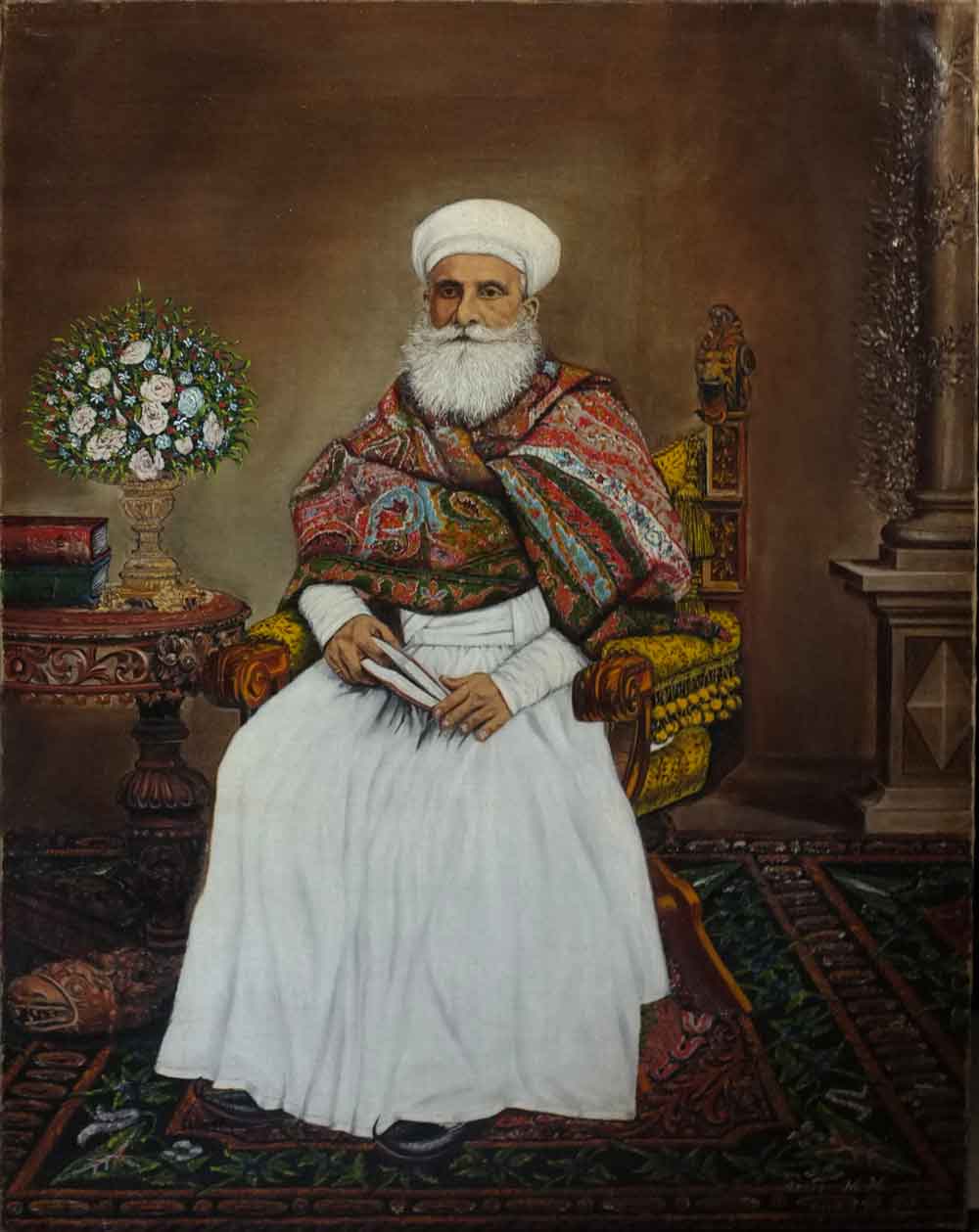 Dastur Noshirvan Dastur Kaikhosrow Behram Framroz (1822- 1897), 20th century, Oil on Canvas
Dastur Noshirwan came from a long line of Zoroastrian high priests who served the great Shehenshahi fire temple in Surat. His father, a Persian scholar, was in charge of the Sir Jamsetji Jejeebhoy School and trained his son in the performance of rituals and the study of Zoroastrianism. 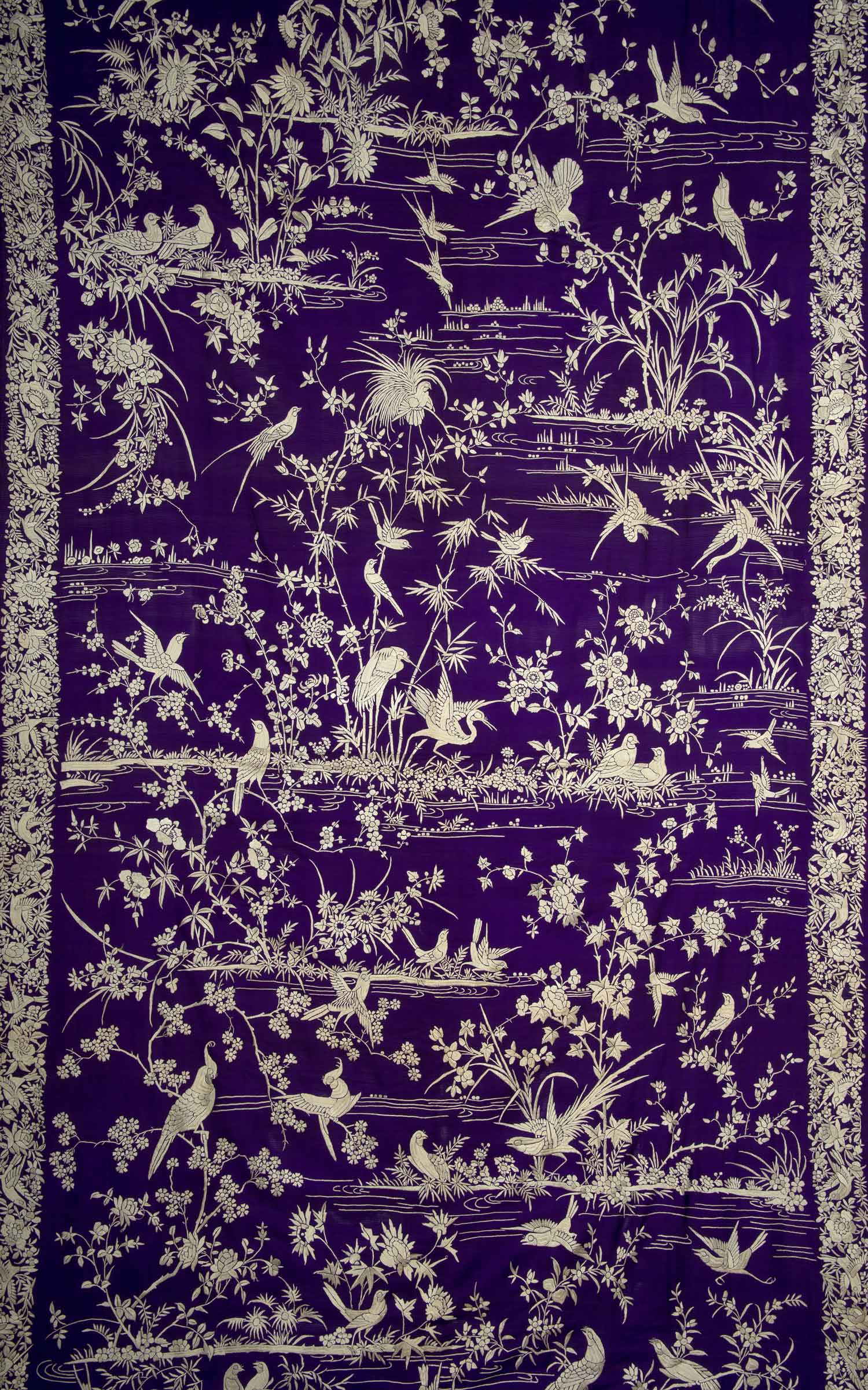 Chinese purple Garo
A late 19th century purple garo embroidered with a variety of birds including peacocks, ducks, stalks, cranes, birds of paradise and parrots. The wish fulfilling Chinese fungus, also called the fungus of immortality, is interspersed through the embroidery together with flowers such as roses, irises and chrysanthemums. 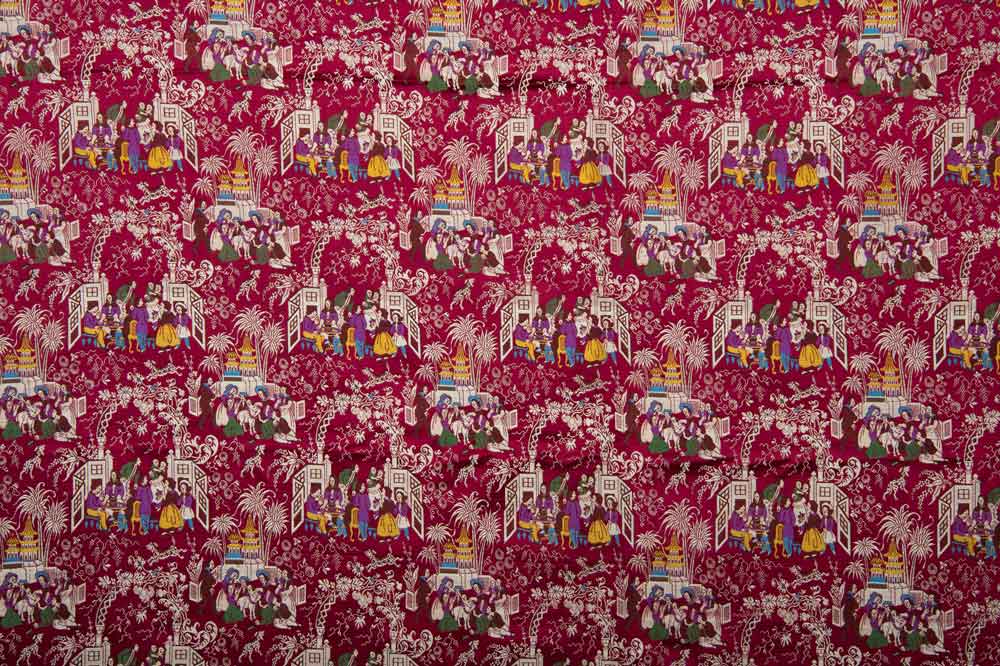 This unusual tanchoi sari was probably woven in the Joshi family workshop, Surat.
It combines within its weave typical Chinese pagodas and architectural features together with tropical vegetation. It also displays European figures, a scene at an inn and a pattern consisting of dogs and the gul-e-bulbul (a flowers-and-birds design) on the border. 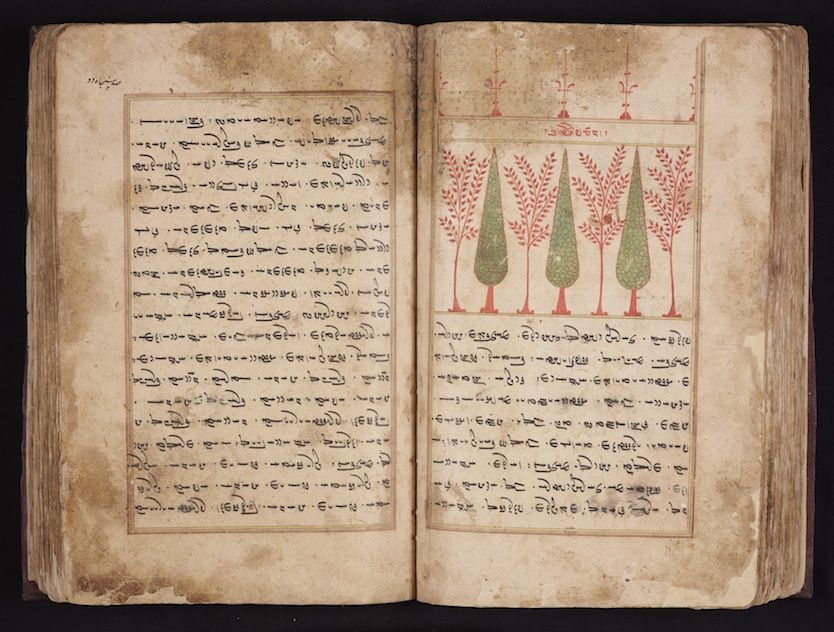 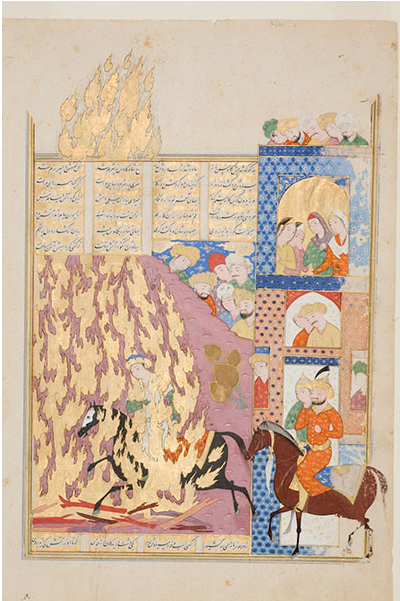 The fire ordeal of Siyavush, Son of Kay Kavus. 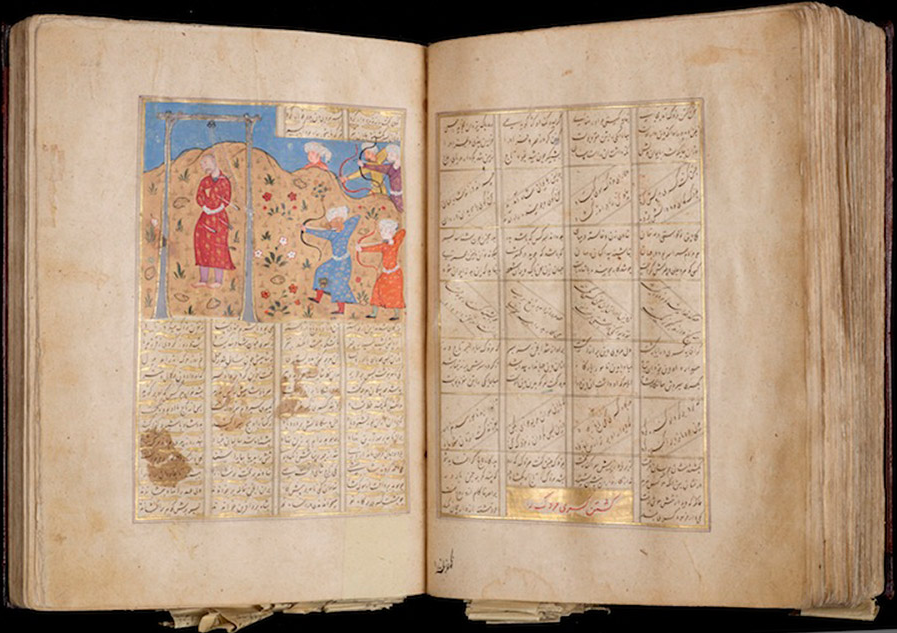 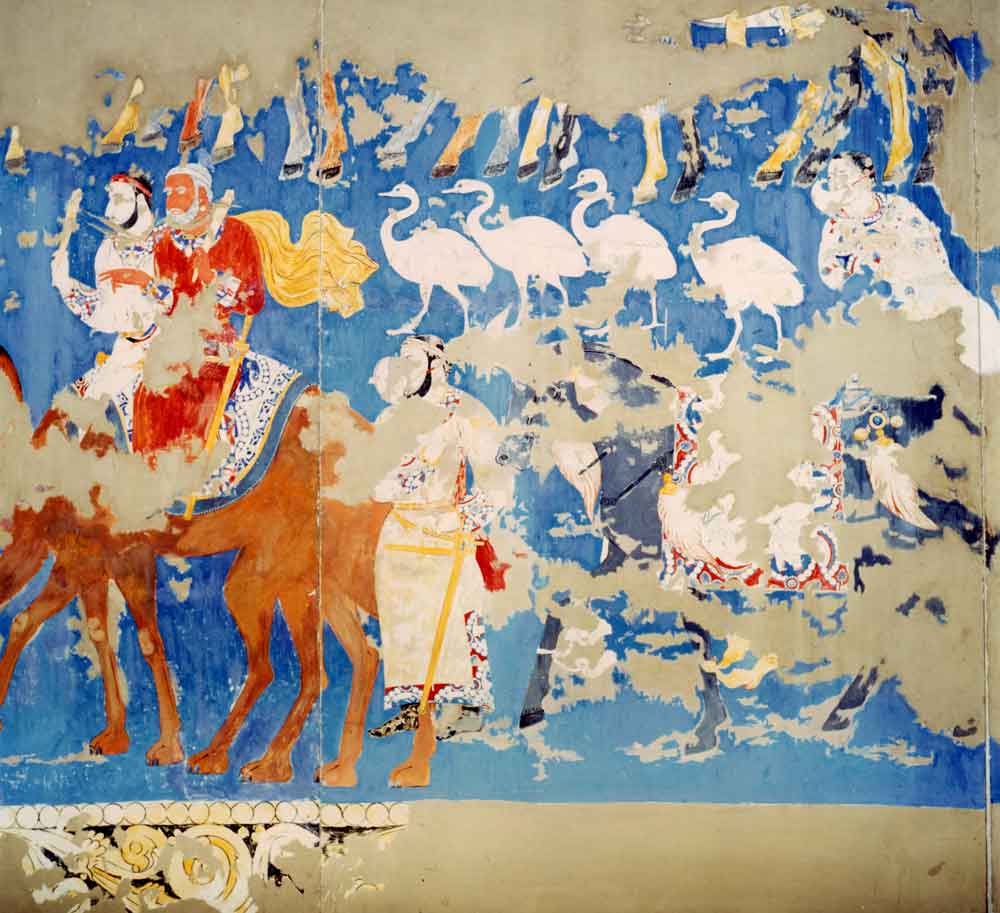 Ambassadors painting, south wall, Institute of Archaeology, Samarkand
The “Ambassadors Painting” was inspired by the propaganda of King Varkhuman, known to have ruled Samarkand in the 650’s and early 660’s and to have been recognized by the Chinese as King of Sogdiana. The part of the painting reproduced here shows Varkhuman (the oversized rider to the right) leading a procession to the mausoleum of his parents. He is accompanied by his wifes, two dignitaries riding camels and a number of sacrificial animals led by Zoroastrian priests. 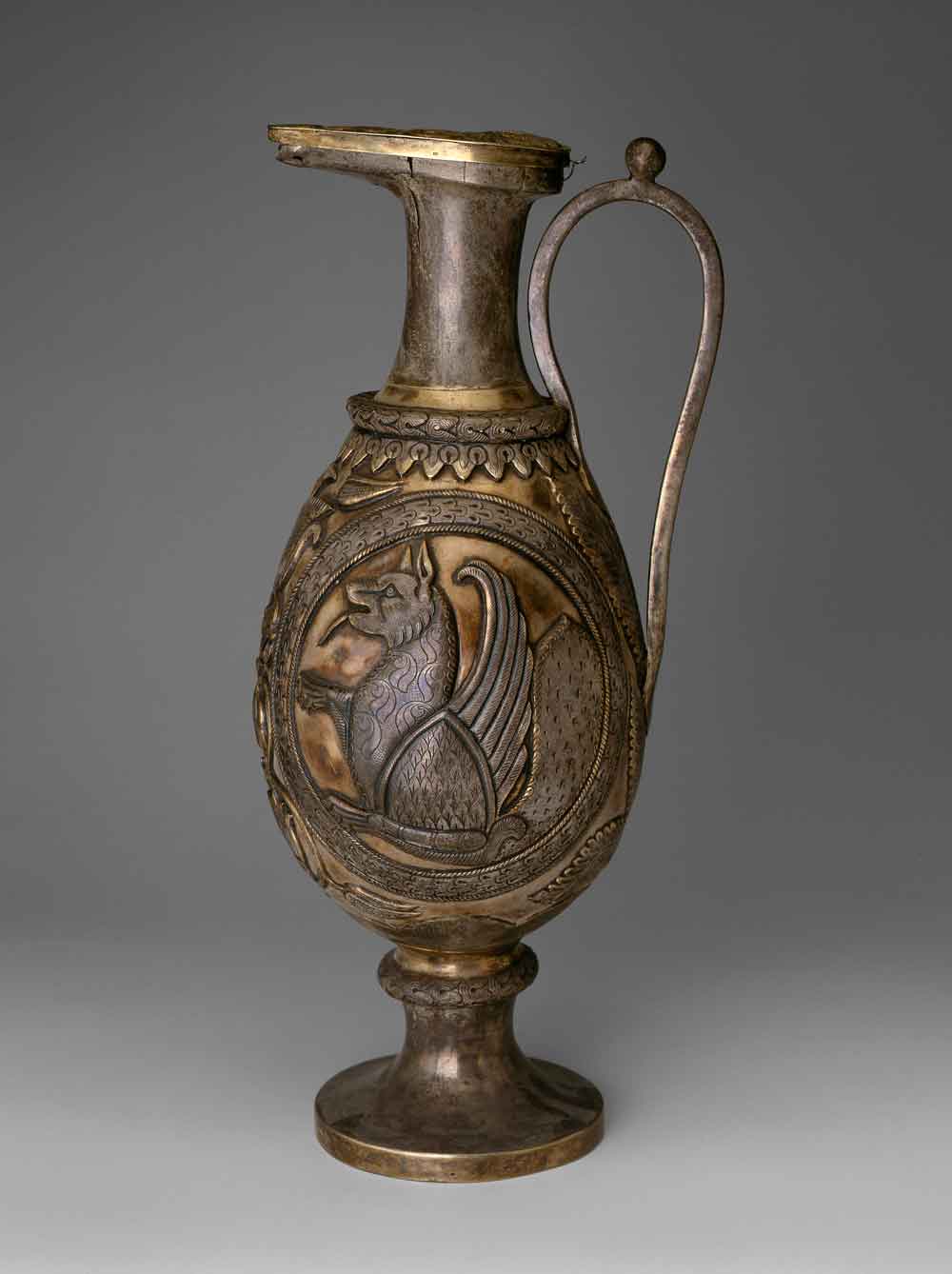