Thread of Time: A Turkish Prayer Rug and a Nigerian Hausa or Nupe Robe

While more of the world’s population is now wearing protective clothing than ever before, in HALI 205, Rachel Meek presents two Islamic textiles from earlier centuries with talismanic properties. One’s decoration provided protection, the other’s required it.

The script in the border of this prayer rug is mostly legible. But the section that wraps around the lower end of the field contains purely decorative, pseudo-kufic script; the same is true for the central medallion. The Met suggests that the ‘well-placed pseudo-kufic writing at the foot’ was rendered illegible by the designer ‘to protect the sacred texts from being stepped on and violated’. While pseudo-kufic writing has been employed to great effect in the border of many classical Turkish rugs (HALI 198, pp. 34-35), close inspection of a photograph of the reverse of this piece suggests that the lower section featuring abstract text might be a later repair. If so, presumably this area was subjected to the type of wear the designer purportedly wanted to protect it from. 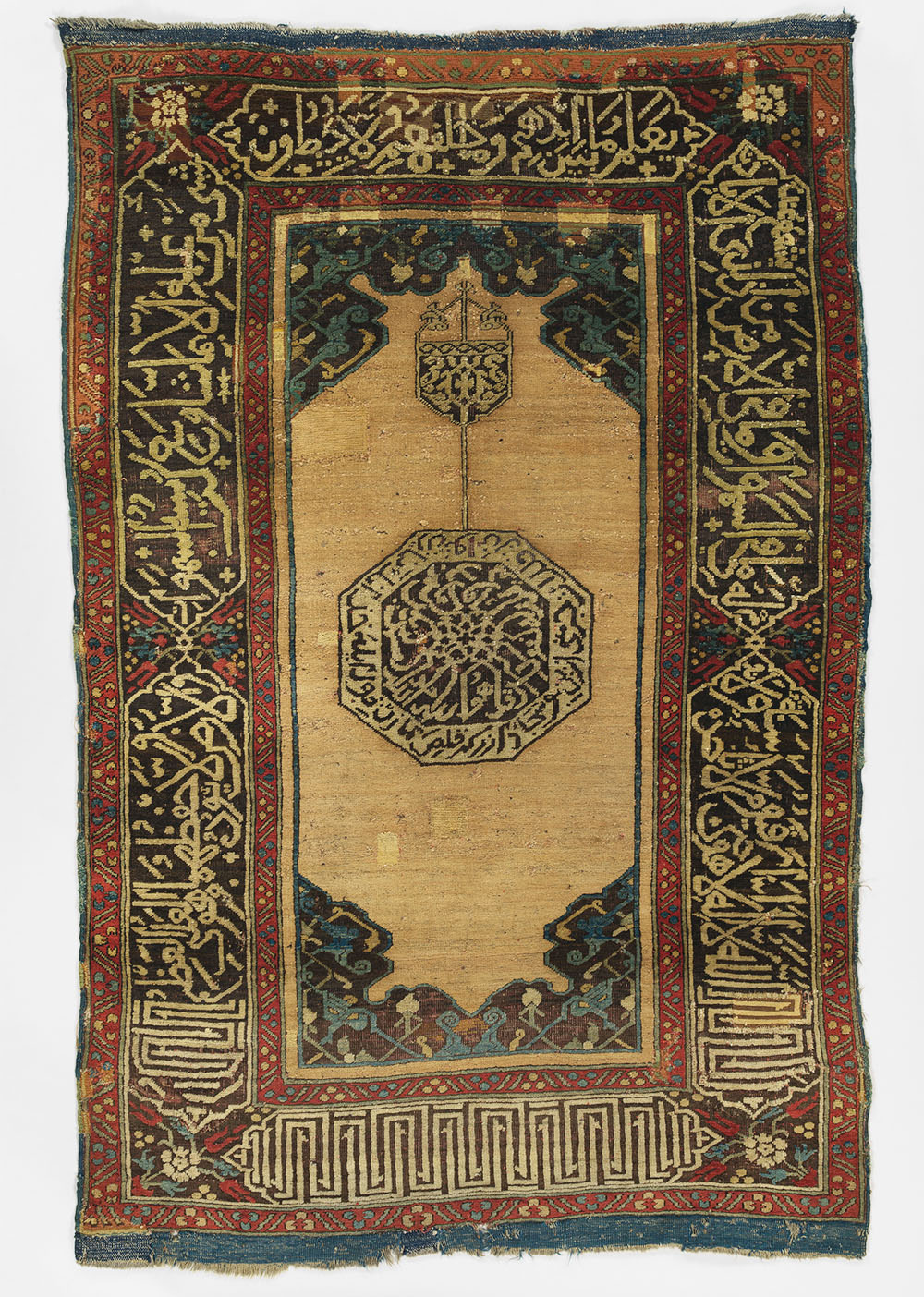 Architectural design elements are integral to the typical prayer rug format, appearing in a regular muchrepeated composition, symbolic of the sacred setting of a mosque. Niches and a hanging lamp motif are employed in this example; others also include columns. In the catalogue titled The Robe of Honor (2014), Vanessa Drake Moraga writes that similar decorative schemes to the embroidered motifs seen on the voluminous ceremonial robe from Nigeria ‘may be noted within the architectural facades of important Hausa and Nupe buildings, such as the palaces and state structures built for prominent emirs’.

Known as riga in the Hausa language, these have been the most prestigious form of male dress among the Hausa and Nupe peoples of Nigeria since the rise of the sovereign Sunni Muslim Sokoto Caliphate in the early 19th century. 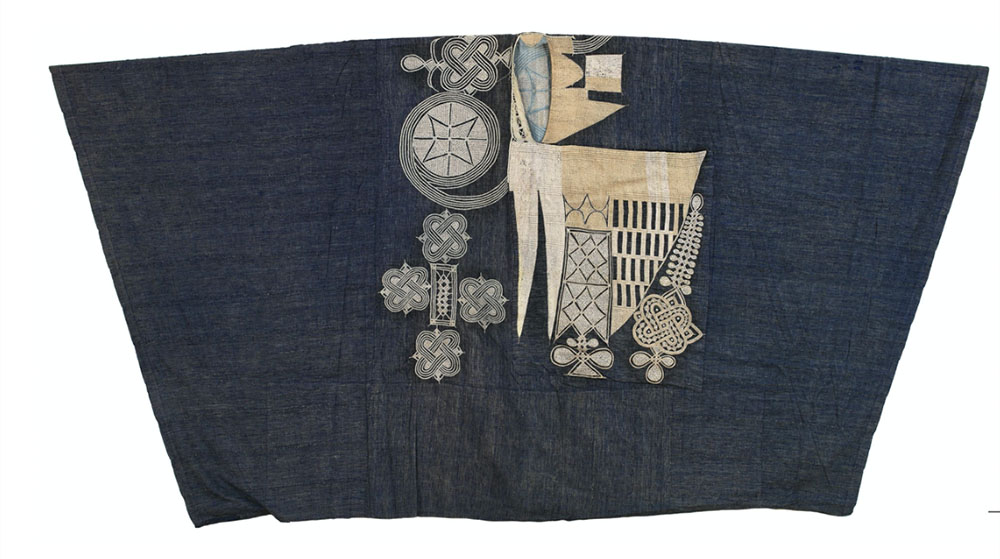 They are rooted in a tradition dating back to the 1400s. At that time, protective tunics covered in calligraphic prayers, Qur’anic verses and magic symbols were worn by Muslim warriors in battle across South Asia, Iran and the Ottoman Empire. An Indian example in the V&A incorporates the entire Qur’an in wearable form (HALI 185, p.65). Fahmida Suleman notes that they later came to be more widely used, being ‘worn as protection against disease, during childbirth, and when travelling’ (HALI 197, p.97).

On riga, symbols devised by ‘a learned man, often a Koranic scholar or imam’, as Drake Moraga writes, are embroidered. As with prayer rugs, riga decoration has a formulaic layout. Two motifs are juxtaposed on the garment’s front: a large block of abstract pattern on the wearer’s left side is offset by a counter-clockwise spiral on the right. ‘Among the most distinctive and significant motifs’ found in the former section is ‘Aska Biyu (Two Knives)… these symbols are unique to this visual and cultural context, possibly alluding to the military ventures and victories of the Sokoto Caliphate.’

On this piece, endless knots surround these two core features. Labelle Prussin traced the evolution of such knots from the geometric and numerical format of Islamic magic squares, like those found on earlier forms of talismanic robes, to a more abstract ‘Africanized’ form in Hatumere: Islamic Design in West Africa (1986). Drake Moraga echoes this, writing ‘the austere elegance and grandeur of the riga gown is as much an overt statement of the wearer’s identification with Islam and its spiritual precepts as a monumental expression of his political allegiance and social status.’ While the decoration ‘reflects the artistic and symbolic legacy of Islam … the elemental components of the cloth—narrow strip weave, indigo dying—are fundamentally West African in character.’