Two dozen important Turkish rugs from the collection of the Brukenthal Museum in Sibiu, Romania will be on display at the National Museum of Gdansk, Poland from 16th November 2013 to 16th February 2014. The opening ceremony will be on Saturday 16th November, 2013 at 6pm.

The exhibition is the result of a partnership between the National Museum in Gdansk, the Brukenthal National Museum, the Romanian Cultural Institute, the Lutheran Church of Romania and the Romanian Ministry of Culture and Religious Affairs. Curated by Beata Sztyber from Gdansk, and Adrian Luca and Alexandru Sonoc, both from Sibiu, the exhibition marks the centenary of the great Budapest exhibition of 1914, when the Transylvanian rug patrimony first came to the attention of a wider public. It is also the first time since then that all the best examples from the collection of the leading museum in Transylvania have been on on display. For carpet enthusiasts and connoisseurs, this is a once in a century event, with vast resonance. 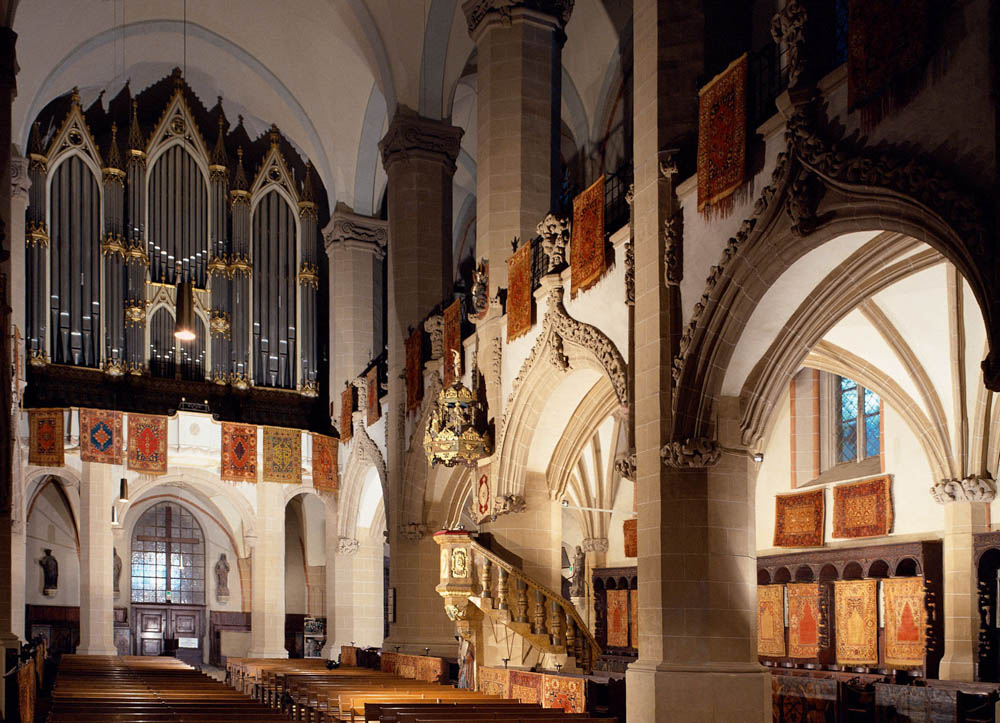 The Black Church, Braşov where several dozen ‘Transylvanian’ rugs of all types are displayed. (Photo S. Ionescu, A. Marginean, A. Udvardi) 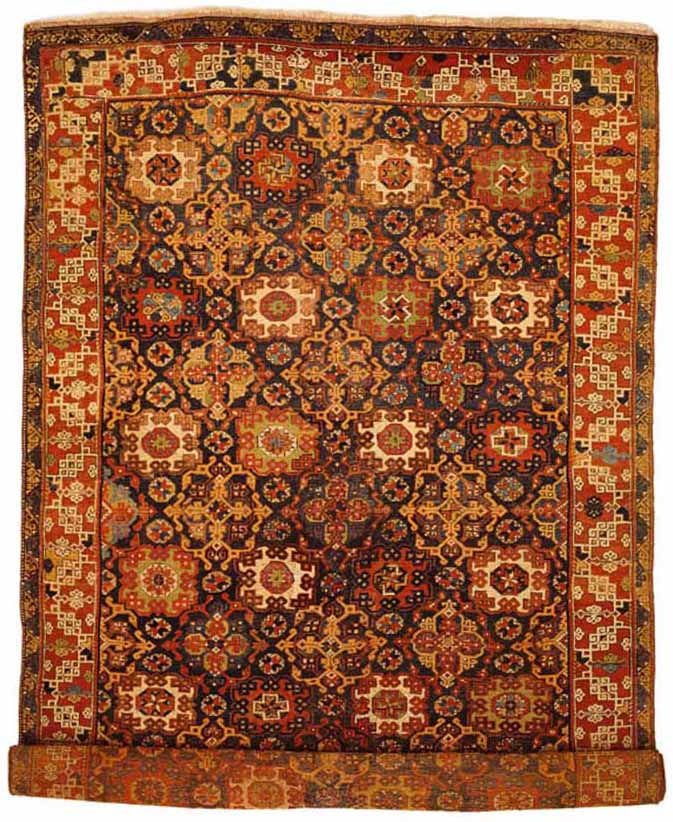 Small-Pattern ‘Holbein’ Carpet, West Anatolia, early 16th century, 178cm x 404cm, 1.220–1.300 knots/dm2. Wool pile on a wool foundation, symmetric knots, lazy lines. Before 1910 in the Evangelical Lutheran Church of Sibiu/Hermannstadt. Brukenthal National Museum, M 2182 (AD 409), old no.2680. Exhibited: Budapest (1914), Rome (2005), Berlin (2006), Sibiu (2007), Istanbul (2007). This is the finest carpet in the collection of the BNM and also the largest. One of the earliest carpets preserved in Transylvania, also one of the few large ‘Holbeins’ worldwide to have survived almost intact, its remarkable richness of colour was noted by Charles Grant Ellis in his study of ‘Holbein’ rugs. The ornamentation of the field is based on offset rows of two different interlinked elements on a deep greenish-blue ground. This border pattern, which does not appear in any Old Master painting, can be found in three other ‘Holbein’ carpets and also in a unique mid-16th-century ‘Lotto’ carpet from Bistriţa 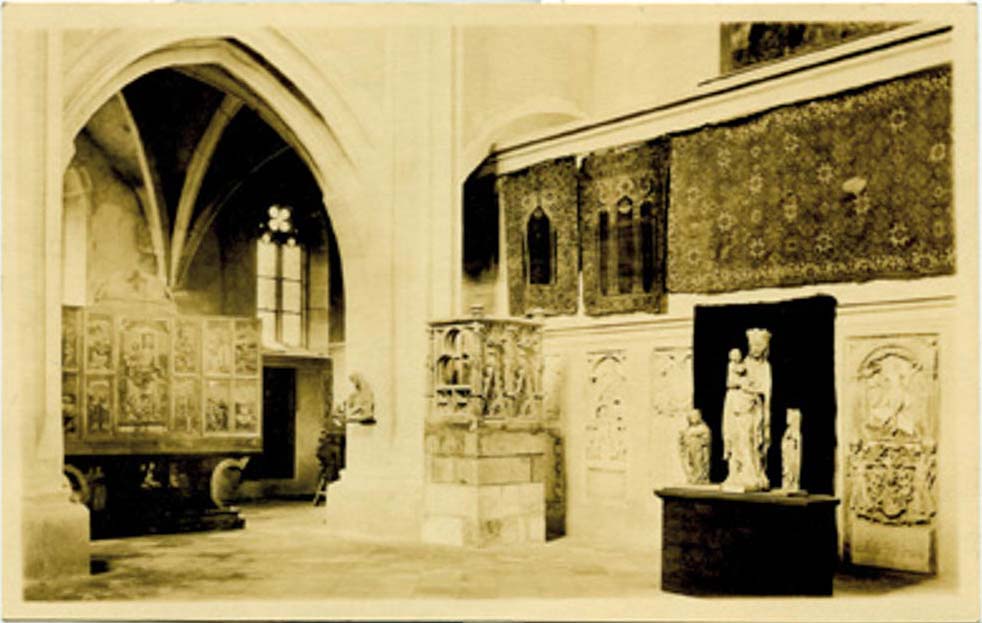 The exhibition features twenty-four West Anatolian ‘Holbein’, ‘Lotto’, white-ground Selendi, and ‘Transylvanian’ rugs from the 16th to 18th centuries. They are in outstanding condition, having been used to adorn the great Lutheran Church in Sibiu and other Saxon churches in Transylvania; most likely they have never been used to cover floors. 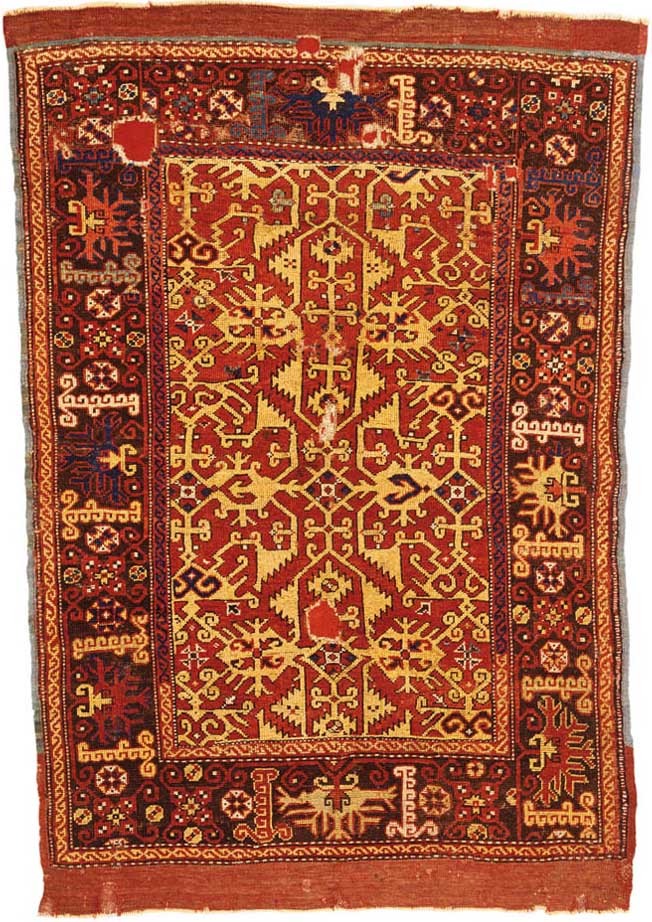 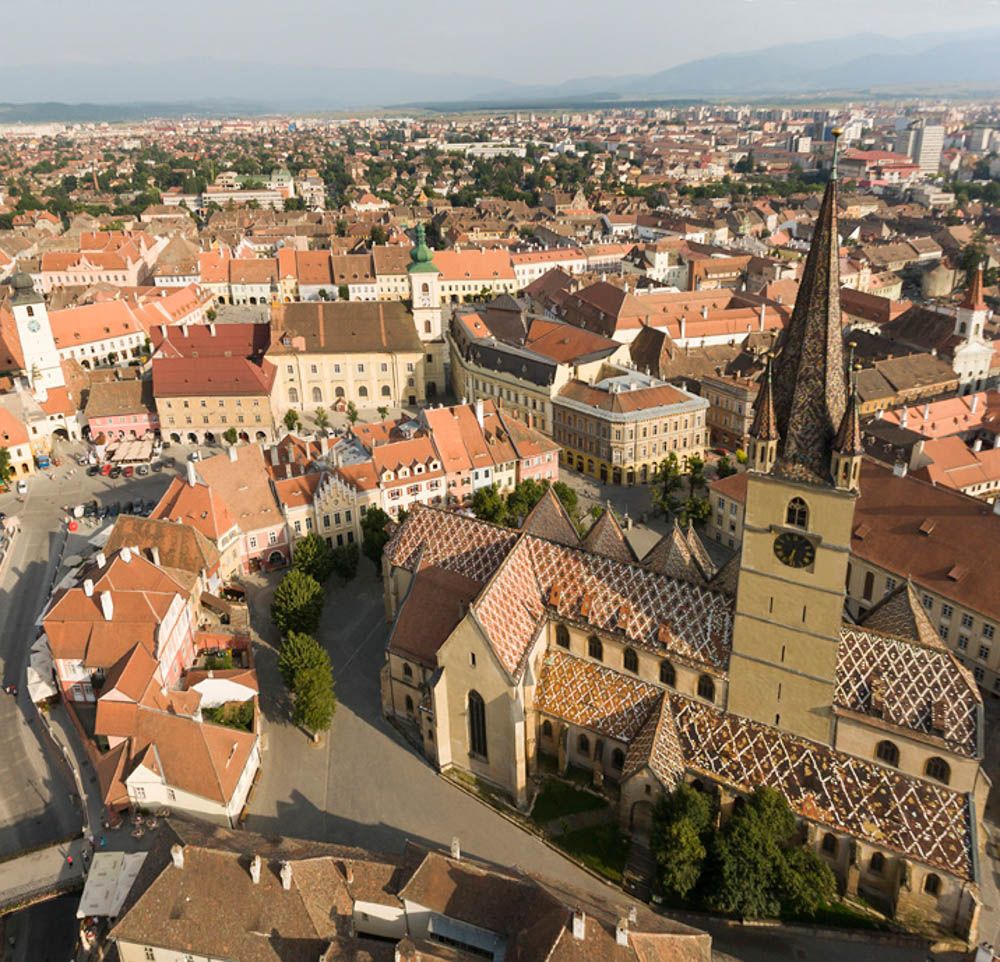 The Great Lutheran Church of Sibiu/Hermannstadt (Photo Scott Eastmann). The Parish Church of Sibiu had one of the most important collections in Transylvania. Twenty-three Anatolian carpets were transferred in 1910 to the Brukenthal Museum (which belongs to the Lutheran Church), where they have been stored for over a century, and today are among of the best-preserved examples to have survived in Transylvania. 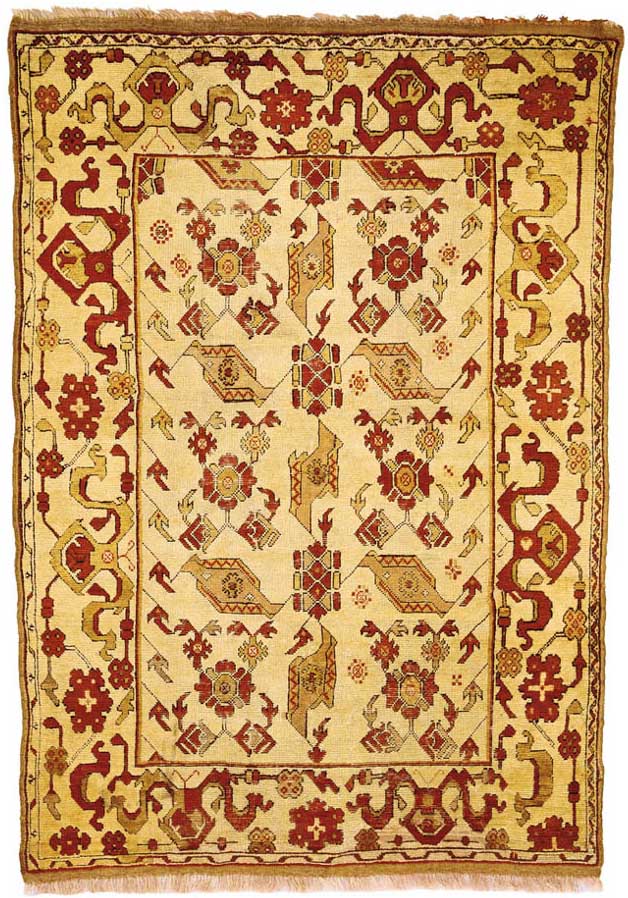 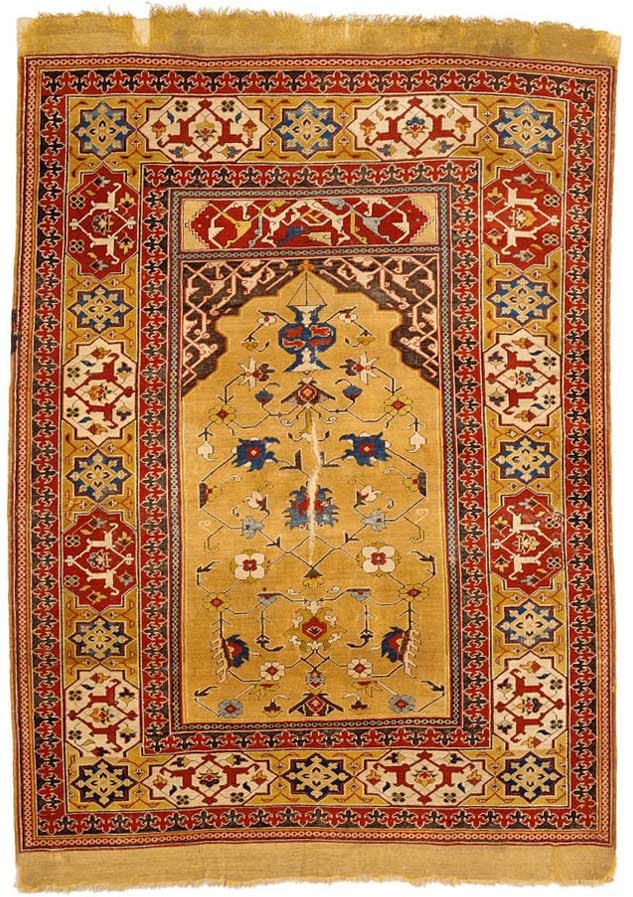 Transylvanian’ Single-niche rug West Anatolia, early 17th century, 118cm x 168cm, approx. 2.470 knots/dm2. Wool pile on a wool foundation, symmetric knots, no lazy lines but there are red/yellow weft changes. Inscribed: MICH Stamp. Before 1910 in the Evangelical Lutheran Church of Sibiu/Hermannstadt. Brukenthal National Museum, M 1626 (AD 385), old no. 2673. Exhibited: Budapest (1914), Montreux (1976), Rome (2005), Berlin (2006), Istanbul (2007). The Brukenthal single-niche ‘Transylvanian’ is one of the best and earliest examples of a small group numbering about fifteen rugs, of which six are still in Romania. One of the peculiar features of this group is the considerable degree of similarity among the early examples that survive today. All have the same composition, a similar profile of the niche with a mosque lamp hanging from the apex and, in most cases, spandrels filled with arabesques with Chinese ‘clouds’, surmounted by a horizontal panel. The close similarities to earlier works of Ottoman architecture (for instance the prayer niche with ornamental tilework at the tomb of Mehmet I in Bursa, of about 1420), suggest that this format was borrowed by the carpet designers from other media 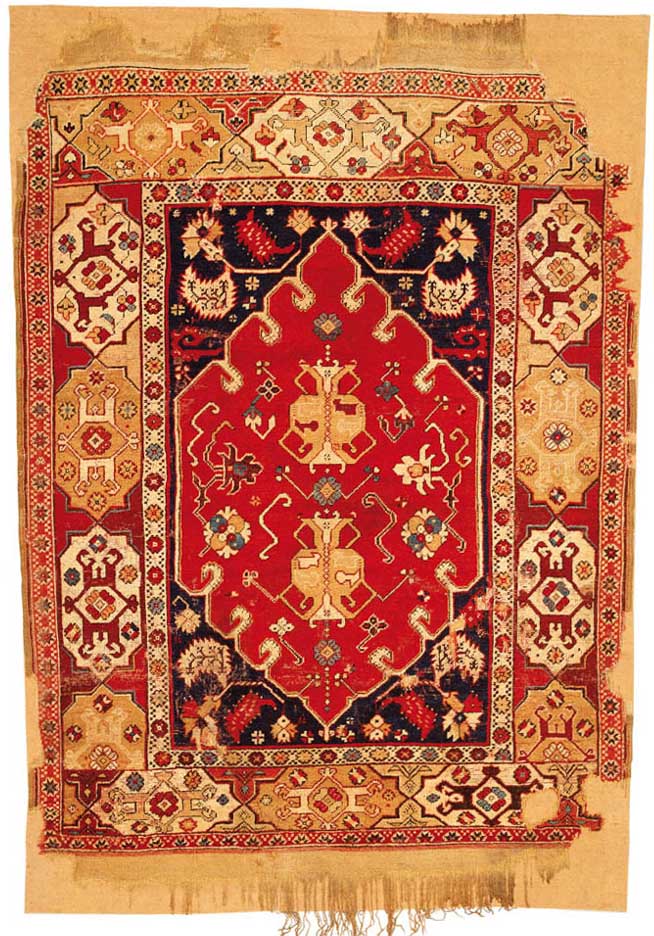 ‘Transylvanian’ Double-niche rug, West Anatolia, second half 17th century, 123cm x 178cm, approx. 1.500 knots/dm2. Wool pile on a wool foundation, symmetric knots, lazy lines, moth damage. Before 1937 in the Evangelical Lutheran Church of Buzd/Bussd.
Brukenthal National Museum, M 2167 (AD 396), old no. 15160. This fine and well-balanced example with fresh colours belongs to the type of double-niche ‘Transylvanian’ with a mosque lamp in each niche. The border shows an interesting and quite rare combination of cartouches on a variegated ground (red, purple and yellow sections), which suggests that the rug is transitional between two different stages in the evolution of the design.

The Lutheran Church of Buzd/Bussd where several examples (now in the Brukenthal Museum) were preserved. 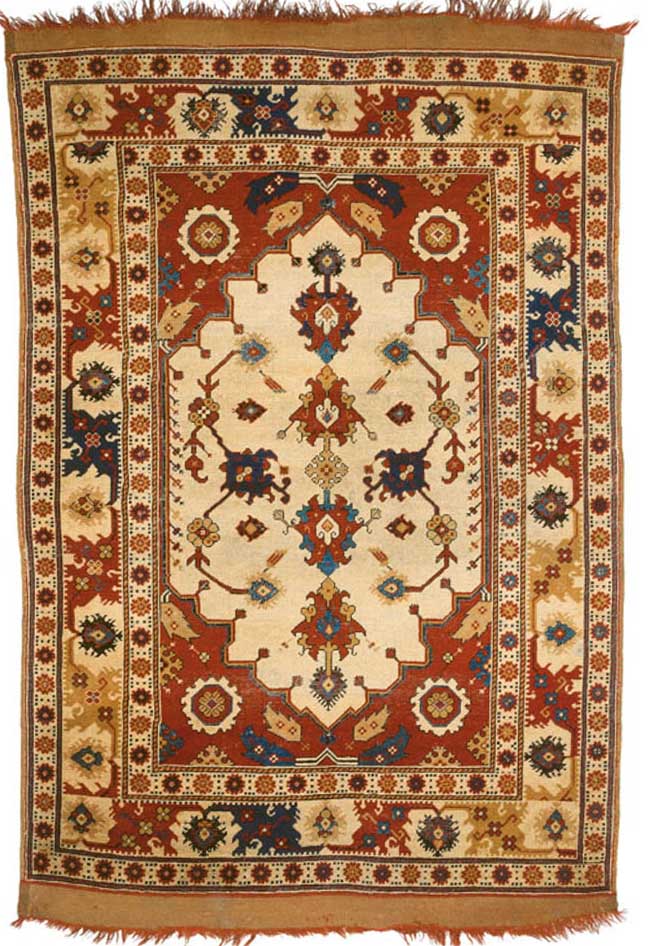 White-ground Double-niche ‘Transylvanian’ Rug
West Anatolia, second-half 17th century, 125cm x 190cm, approx. 1.440 knots/dm2. Wool pile on a wool foundation, symmetrical knots, lazy lines. mint condition. Before 1910 in the Evangelical Lutheran Church of Sibiu/Hermannstadt. Brukenthal National Museum M 2188 (AD 415), old no. 2661. Exhibited: Budapest (1914), Montreux (1976), Rome (2005), Berlin (2006), Istanbul (2007). This rare white-ground ‘Transylvanian’ rug, which adorned the great Lutheran Church in Sibiu, is one of the best of its kind in terms of design, proportions, palette and freshness of colours. The profile of the niche is very well drawn, in the style of first-period ‘Transylvanians’, while the palmettes and the central ‘cog-wheel’ rosette, aligned along the vertical axis, are typical of second-period production 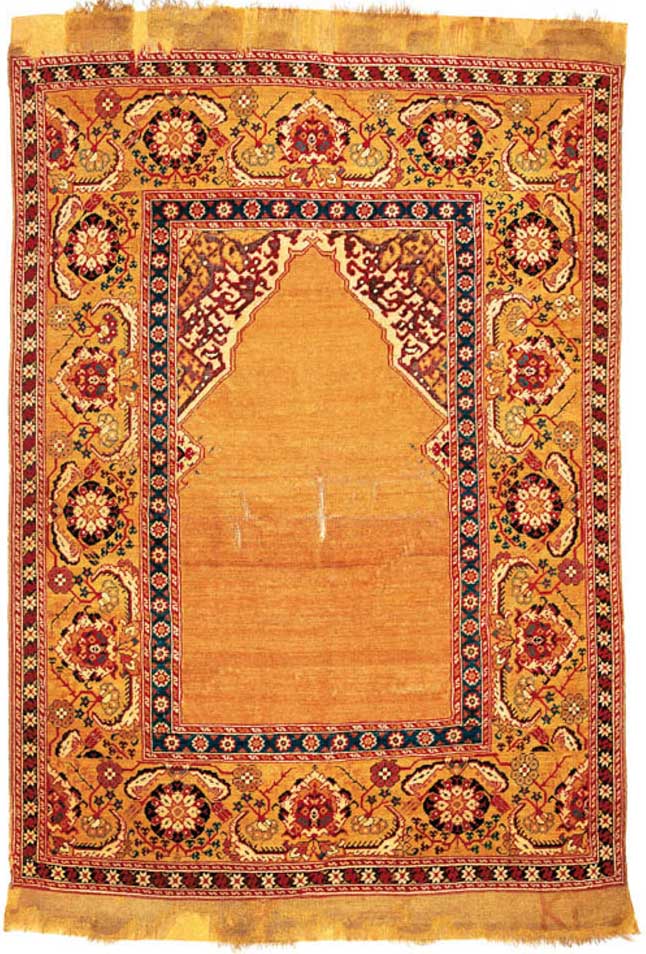 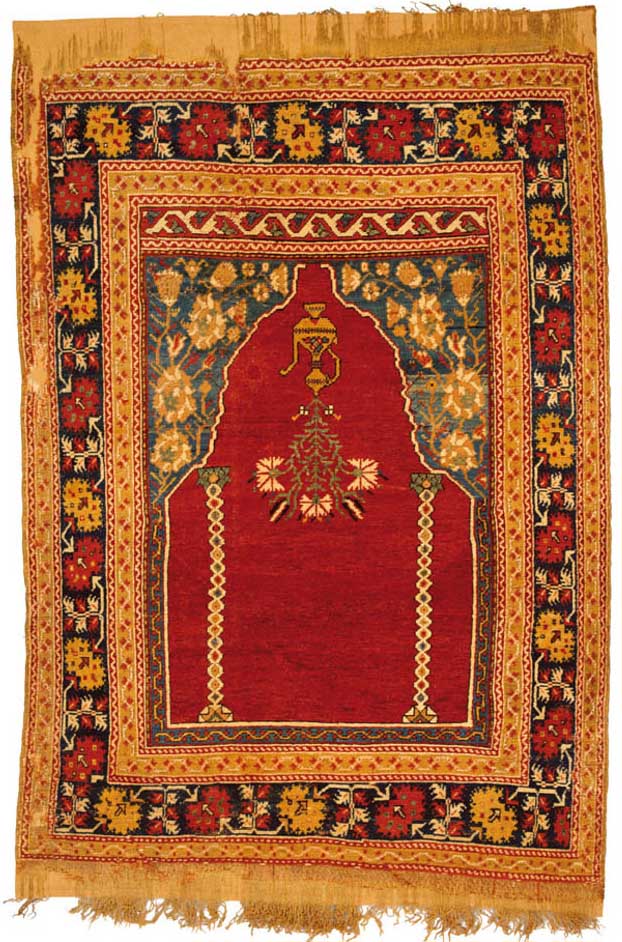 Gördes Prayer Rug, West Anatolia, early 18th century, 123cm x 178cm, approx. 1.100 knots/dm2. Wool pile on a wool foundation, symmetrical knots, lazy lines. Before 1910 in the Evangelical Lutheran Church of Sibiu/Hermannstadt. The National Brukenthal Museum, M 2189 (AD 416), old no. 2664. Exhibited: Budapest (1914), Berlin (2006), Istanbul (2007). This prayer rug, with its fresh colours, good proportions and striking design, is a development of the two-column pattern, seen in other examples. The spandrels, with a composition of stylised palmettes and tulips on a variegated turquoise ground, are extended to run like a wavy stem around the sides and bottom of the niche, causing it to ‘float’ (as with the tile-work prayer niche at the tomb of Mehmet I in Bursa) 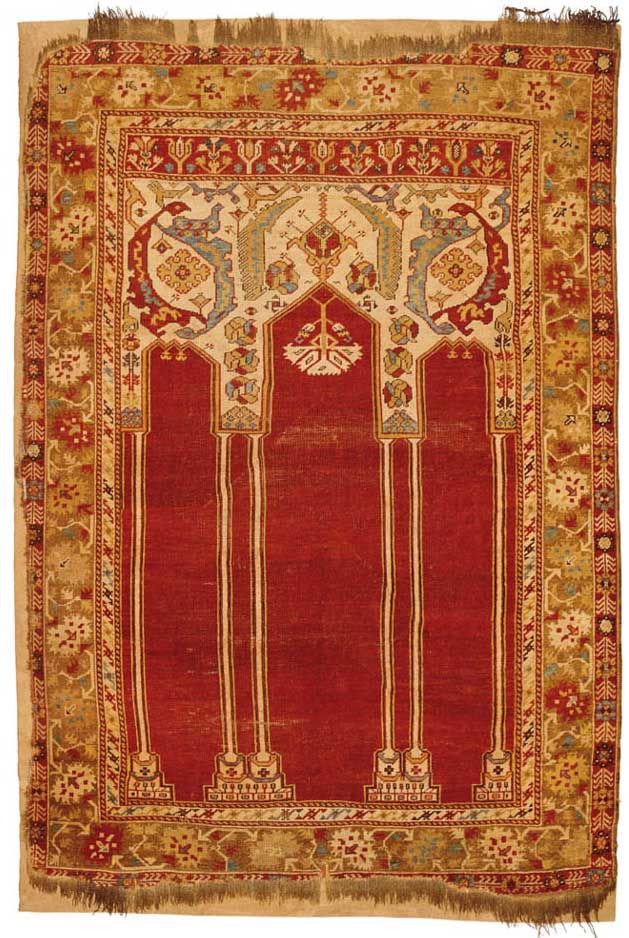 To accompany the exhibition, the museum in Gdańsk has published a companion book, the first-ever Polish publication on ‘Transylvanian’ carpets. The book was developed by the independent carpet scholar Stefano Ionescu, who has written an introduction and detailed catalogue notes, while Dr Sonoc tells the history of the Brukenthal collection. Dr Beata Biedrońska–Słota is the academic editor for this Polish edition.