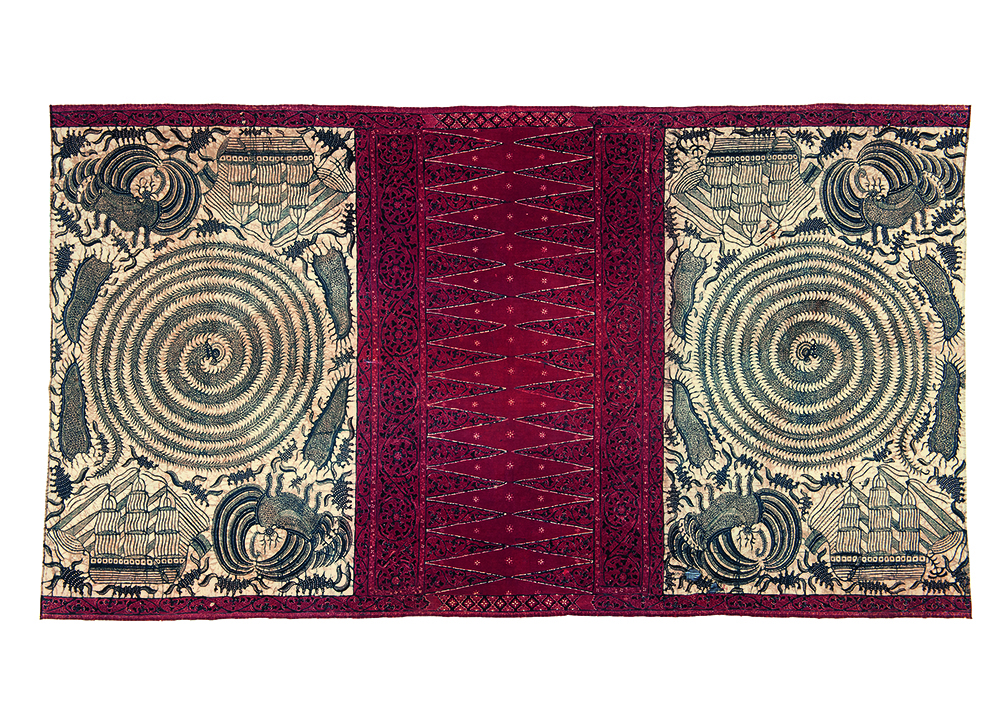 Two resist-dyed trade cloths with roots on India’s Coromandel Coast have serious cross-cultural credibility. HALI Assistant Editor Rachel Meek compares an Indian hanging in India with a skirt cloth made for Indonesia and now in the Netherlands.

In Indonesian Textiles at the Tropenmuseum (2017) Itie van Hout and Sonja Wijs reveal the sarung to have been made ‘around 1870 in Lasem on the north coast of Java at a time when it was a bustling port with an emerging batik industry’. Commercialised batik production began when machine woven cotton cloth was imported from India, England and the Netherlands in the 19th century. From the 1840s, Dutch women started batik workshops alongside Peranakan (Straits) Chinese, Indo-Arab and Javanese traders in the Dutch East Indies. Immigration increased after the Suez Canal opened in 1869—around the time of this cloth—and the batik entrepreneurs used motifs drawn from western embroidery as well as Indian chintz.

Its colours are typical of Lasem cloths but the spiralling medallions relate to those on Indian trade cloths highly prized on Sumatra. Ships and mythical creatures appear on woven and embroidered tapis from the Lampung region, which remained isolated until colonial expansion in the 19th century. Similar imagery appears here, but the vessels are European style ‘with the wind in their sails and a row of gunports’, indicative of Java’s established status as a Dutch East India Company (VOC) trading post—especially for Coromandel Coast textiles—since the 17th century. 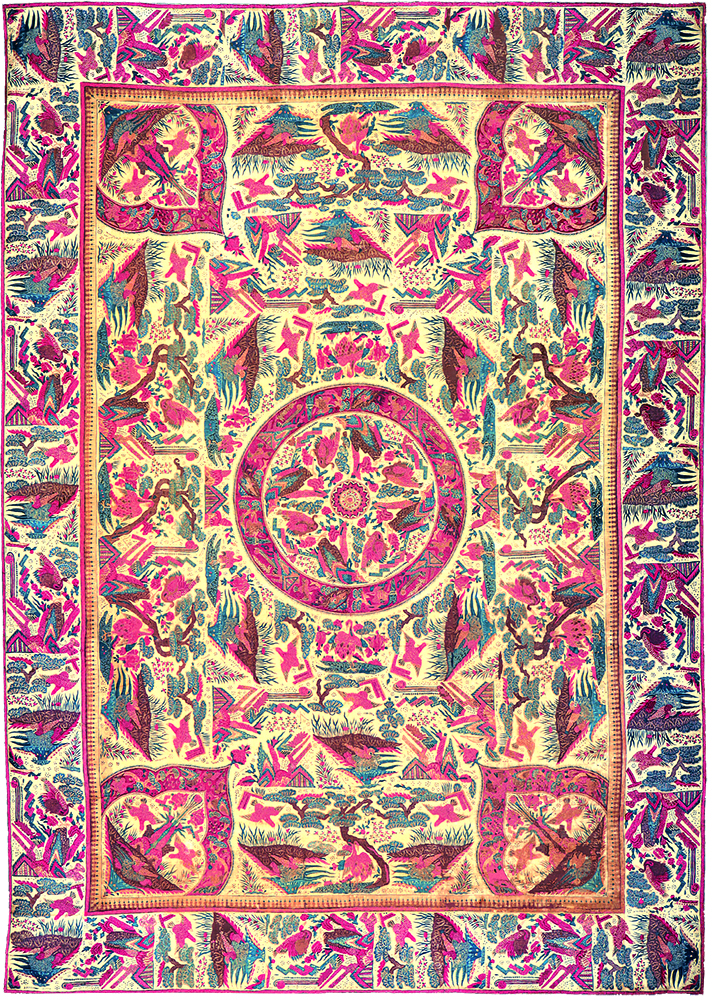 Chintz palampore with a Japanese-style design of pine trees, rocks, ponds and birds, Coromandel Coast, India, made for the Dutch market, early 18th century. Cotton, printed, mordant and resist dyed. Loaned for exhibition in Kyoto during the 2012 Gion Matsuri Festival, at which the 60th anniversary of Indian-Japanese diplomatic relations was commemorated. TAPI Collection, Surat, TAPI 04.145

Javanese myth tells that weaving and batik dyeing were introduced around 700 CE when an Indian princess married a Javanese prince. In 1900, the Dutch researcher G.P. Rouffaer proposed the same source for the batik technique, and in the 1980s, Rens Haringa suggested that it had spread to Central Java from the prosperous northern ports.

Whether or not Javanese batik originated there, the Coromandel Coast was at the heart of the global chintz industry, with production catering to the tastes of both Indonesian and Dutch markets. The palampore has a typically Indian central medallion, of the kind the sarung spirals might emulate, but the surrounding motifs owe their inspiration to bingata textiles from Okinawa. As the most prolific European traders in Japan, the Dutch monopolised trade with India from the 17th century. This remarkable cloth reflects growing Indian and Dutch interest in Japanese-inspired design in the period that followed.