Anatomy of an Object: A Baharlu/Ainalu Carpet 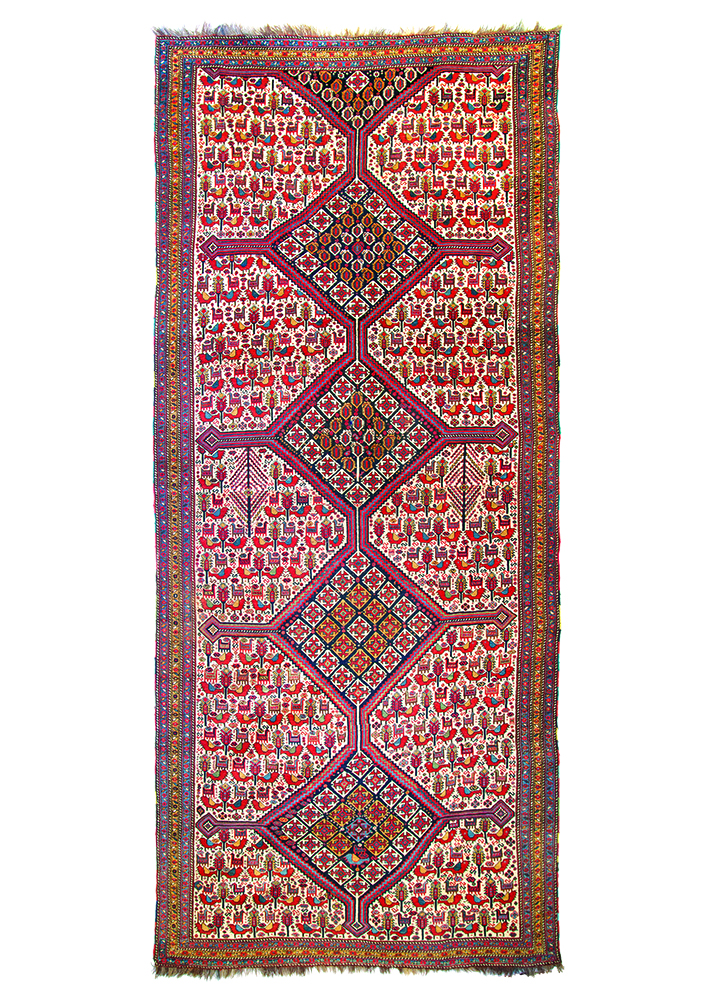 Although unsigned, this grand Khamseh Confederacy carpet, of unusually large size and great artistic merit, was likely made for a tribal khan by a weaver of the Baharlu or Ainalu tribes.

This magnificent 19th-century southwest Persian tribal carpet, from the collection of an Argentinian architect and artist, is worthy of attention both for its generous dimensions and its clear and vigorous graphics. The narrow borders identify it as the work of a weaver of the Baharlu or Ainalu tribes in Fars Province.

Both the Baharlu and the closely-related Ainalu (Inalu) are Turkish-speaking affiliates of the historical Khamseh (meaning five in Arabic) Confederacy of five quite disparate Persian, Turkish and Arabic-speaking tribes. These nomadic pastoralists from southwest and west central Iran were put together by Shah Naser-ed Din Qajar (r. 1848-1896) into an administrative entity in 1861 to counterbalance the emerging power of the Qashqa’i in Fars. The other three tribes of the Khamseh Confederacy, which was disbanded in the late 1950s, were Arabs and the Farsi-speaking Basseri and Nafar.

The carpet is woven using symmetrically-knotted sheep’s wool on woollen warps and wefts. The natural ivory field is filled with an overall repeat of horizontal rows of paired fowl, probably chickens (murgh), with madder-red bodies but with gold, green or blue colour variations on their wings. These are arranged between rows of polychrome quadrupeds, all facing each other on either side of a tree or shrub. Superimposed on the field is a powerful vertical column of four complete and one partial large diamond-shaped, blue-ground medallions, with multicoloured stepped outlines, and prominent lateral extensions reaching to the border. These divide the bird and animal ground into ten hexagonal fields. The medallions contain concentric variations of boteh and cruciform motifs.

Several of the elements used in the rug are attributed by the authority on the weavings of Fars Province, Cyrus Parham, to the Lori tribe (Masterpieces of Fars Rugs, Tehran 1996). These and other design elements suggest a synthesis of diverse influences.

Executed with great finesse, although not inscribed with a commissioner’s name or a date, it is quite likely that such a large, complex and valuable carpet would have been woven for the tent of a tribal chieftain, or as a gift for a visiting dignitary. 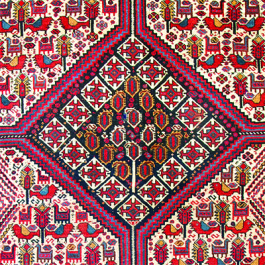 Learn more about the design elements of this Baharlu/Ainalu carpet. 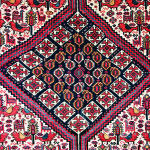 The upper two and a half medallions are filled by concentric ‘flaming’ boteh designs, precisely executed in a disciplined, angular style somewhat reminiscent of those seen far to the north in Marasali Shirvan rugs. The consistency of drawing, weaving and dyeing marks this out as more than just another large tribal carpet. 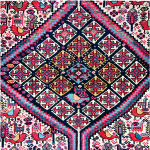 Just below the centre on the vertical axis of the lowermost dark blue-ground medallion (the first to be woven), the Baharlu/Ainlu weaver has included, in almost armorial style, a single blue-bodied, yellow-winged, bird, standing beneath an attenuated four-legged beast that may be a crude rendering of the Persian national emblem, the lion and the sun. Otherwise the medallion is filled with concentric multicoloured registers of so-called ‘Sasanian emblem’ cruciforms. 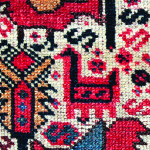 The red-bodied birds, probably chickens but perhaps pheasants or other fowl, that cover the ivory field of this handsome carpet appear in horizontal rows of confronting pairs flanking shrubs or trees with a single diamond-shaped blossom at the apex. Rows of quadrupeds, arguably goats or sheep, separate the birds, while the ivory ground is filled, in typical horror vacui style, with all manner of motifs. 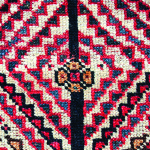 Two large, highly-stylised, angular, shrub-like motifs interrupt and enliven the otherwise regimented directional character of the filler decoration on the ivory ground. Their chevron branches in mirror image repeat around the horizontal centre line of the carpet. The Iranian scholar and collector of Fars rugs, Cyrus Parham, believes such motifs to be of Lori inspiration.