Anatomy of an Object: A ‘Lotto’ Arabesque Rug 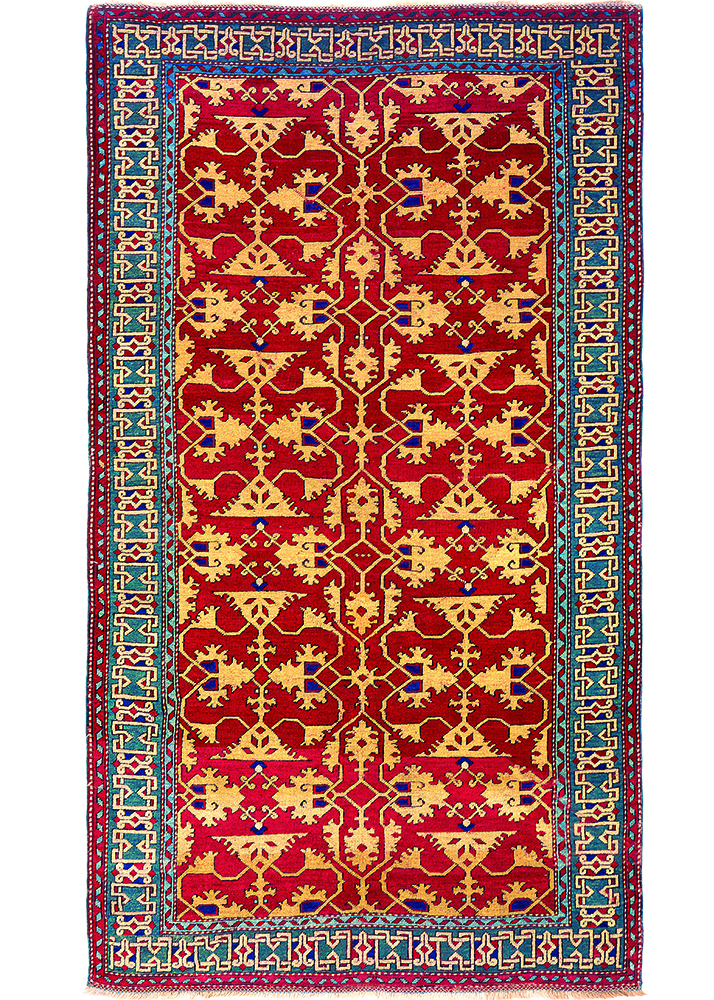 This dynamic Anatolian ‘Lotto’ rug was a gift from James F. Ballard to the Saint Louis Art Museum (SLAM). Here we look at the characteristics of the type.

So-called ‘Lotto’ rugs were made in considerable numbers in Anatolia between the late 15th and 18th centuries, in both small and much larger formats. They are named after a specific Renaissance painting by the Italian artist Lorenzo Lotto — The Charity of Saint Anthony, an altarpiece of 1542 in the church of San Giovanni e Paolo in Venice. However, although ‘Lotto’ rugs do not appear in Renaissance paintings until the first half of the 16th century, the characteristic infinite repeat split-leaf arabesque pattern arises from the international Islamic style of the second half of the 15th, and a few of these rugs may predate 1500.

In The Carpet and the Connoisseur, the catalogue of the 2016 Ballard collection exhibition in Saint Louis, Walter Denny describes the general design as a ‘geometric pattern of stylized split leaves and blossoms in yellow on a red ground; the conceptual basis… comprises two different elements, one cruciform and the other more four-square, arranged vertically in staggered horizontal rows.’ He also points out that the ‘adaptation of a curvilinear prototype to the carpet medium produced a strongly geometric form.’

Denny accepts the conventional wisdom that most rugs of this design type were woven in western Anatolia, pointing to their technical affinity with the commercial carpets of Ushak, but he avoids the improbable blanket market attribution of all ‘Lottos’ to Ushak. Like Charles Grant Ellis, he allows for their creation in other areas, as with the present small-format rug, with its ‘closed’ kufesque border and rich colouration, which he assigns to central Anatolia in the first half of the 16th century.

The rug is woven in what Ellis has dubbed the ‘Anatolian’ style, and apart from a few small reweaves is in very good condition with the dark brown dyed wool less corroded than in many early carpets. It is arguably not the oldest of the four Ballard ‘Lottos’ at SLAM. Using the main border design as the primary determinant of the chronological sequence of such rugs, it represents the second stage in the evolution of the pattern.

The earliest ‘Lottos’, among them an even smaller Ballard rug in Saint Louis, have an ‘open’ kufesque primary border, a faux-calligraphic interlaced band in white on a blue ground, in which the vertical ligatures of the Arabic letter-like forms end in finials that point away from the field. Here, however, the white geometric arabesque on its blue-green ground has been simplified to a more compact ‘closed’ or ‘boxed’ kufesque interlace without extending ligatures and finials. 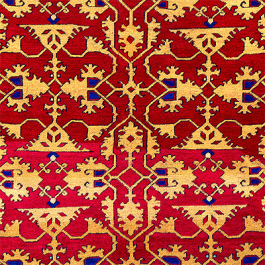 Learn more about the details of this ‘Lotto’ rug. 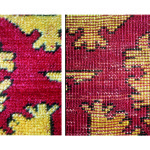 The two details shown above represent the same section of the Ballard ‘Lotto’ rug, approximately 10 cm square, taken from both front and back. On the face one can see the slight pull to the left of the tight and well-balanced 2-ply symmetrical knotting. The back detail clearly shows the ribbed surface caused by the partial depression of alternate warps, and double weft shoots of red-dyed wool. 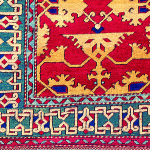 All four corners of the Ballard ‘Lotto’ rug show a typically Turkish corner solution, or rather the lack of a designed solution to the drafting problem, where the main blue-ground border turns ninety degrees. The primary border itself is in the so-called ‘boxed’ or ‘closed’ kufesque style, in which the faux-calligraphic white interlace has taken a further step towards geometric abstraction, away from the more realistic ‘open’ kufesque seen on the arguably slightly earlier versions. One can also clearly see the three different shades of blue — dark for motif outlines and the ‘eyes’ within the yellow arabesque, mid-blue green for the main border ground, and sky-blue for the inner minor guard. 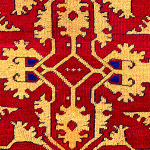 This field detail shows the full ‘Anatolian’-style horizontal pattern unit, which on this rug appears in two columns each containing three and a half repeat units, creating an underlying ovoid substrate design implied by the yellow arabesque on a red ground. On the slightly smaller Ballard 104.1929 in SLAM, the pattern unit appears as a single column of two full horizontal units with half-units above and below on the central vertical axis. So the underlying substrate design is somewhat rounder, due to the more generous horizontal spacing of the pattern.