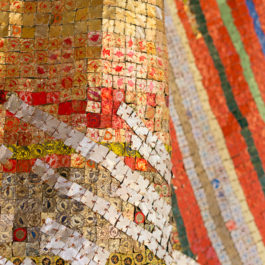 Highlights from ‘El Anatsui: Material Wonder’ on show at the October Gallery. 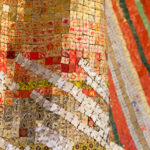 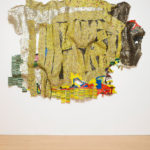 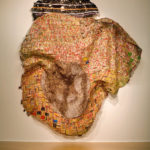 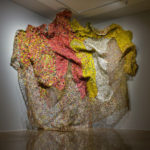 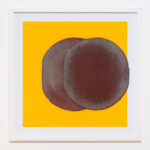 The force and creative vision of West African artist El Anatsui will be celebrated at the October Gallery later this month. From 28 February-6 April 2019, ‘El Anatsui: Material Wonder’ will feature the fascinating metal sheet hangings that have won El Anatsui international renown, accompanied by a series of prints made in collaboration with Factum Arte, Madrid. El Anatsui has explored an extraordinary range of subjects and media throughout his career; from clay, and wood in his early years, to metal and discarded bottle tops in his later installations. Today, he is best known for his sewn metal wall sculptures, composed of many thousands of aluminium bottle tops. Commentators have seized on their motifs and linked them with traditional textile art. However, as the following selected extract from El Anatsui: Art and Life by Susan Mullin Vogel (Prestel, 2012) that featured in HALI 177 makes clear, their relationship with cloth–and sculpture–is rich and complex. 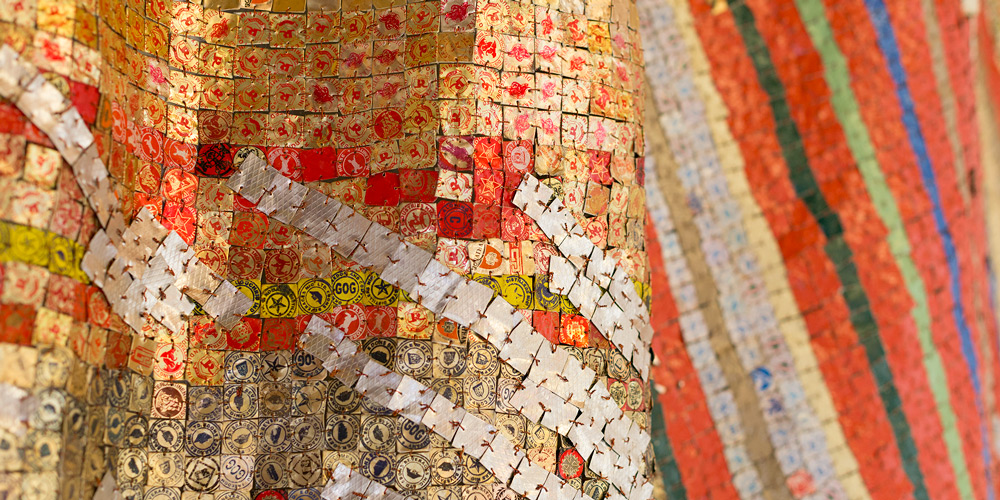 ‘El Anatsui says, ‘I’m not interested in fabric per se. It’s the format or the form of the cloth: that it’s free, that you can put it on a wall, squeeze it into a small ball, drape it on the floor, anything.’ His affinity with cloth was never the obvious one that has been attributed to him but, characteristically, something both more grounded in artistic practice and more complex.

Anatsui had used words for cloth in the titles of many of his wood panels, although the formal link in that case was no more than the rectangular format. The first flexible metal sheets must have reinforced the connection in his mind between his work and textiles, and he titled the first ten of these works with words for cloth in one language or another. He continued to give cloth names to the metal hangings even when their graphic designs made such titles incongruous, as in Society Woman’s Cloth (Red and Black), 2005. None of his titles since 2007 have referred to cloth. 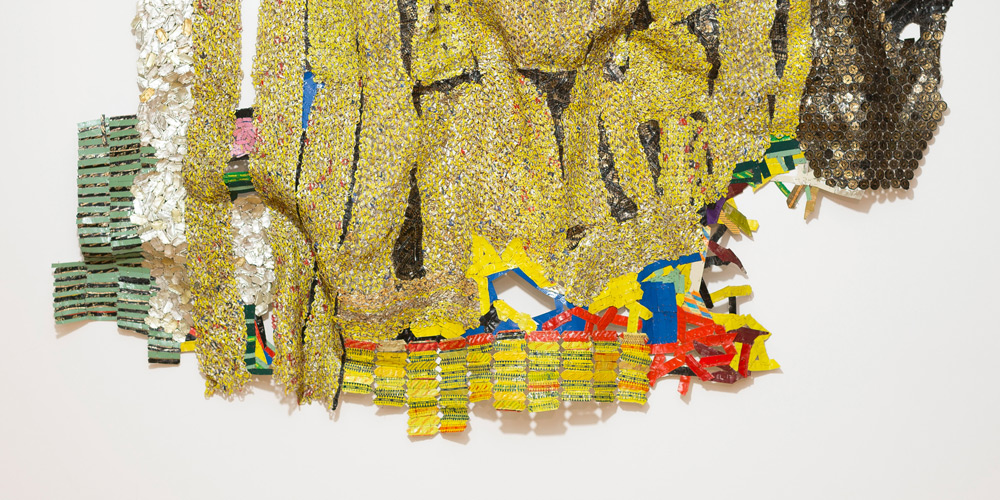 From his early days in Kumasi, Anatsui had been interested in the adinkra motifs as graphic designs richly laden with symbolic meanings and history; he was not particularly interested in the cloth on which they were traditionally printed. But he was struck by a remark he had heard in the United States: ‘Cloth is to the African what monuments are to Westerners.’ Quoting this observation in an interview with Atta Kwami in 2003, he added that the capacity of cloths ‘to commemorate events, issues, persons, and objectives outside of themselves is so immense and fluid it even rubs off on other practices’–presumably including his own art practice, lent resonance by the idea of cloth as memorial. When Kwami asked him why he was working on cloth themes, he replied laconically, ‘Probably the genetic factor.’ 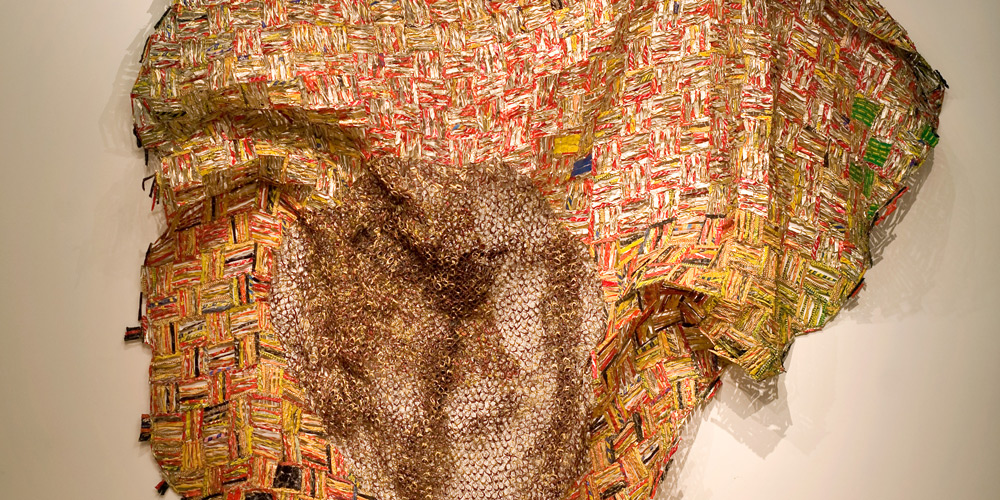 For the very first metal pieces, made before the studio began to produce rectangular blocks of bottle tops, Anatsui’s main material was the rectangular element called ‘Plain’, coupled in long strips. Stitching these strips together to form sheets replicated the fabrication method of traditional narrow-band African textiles, making the analogy obvious. Adinkra Sasa, named for a kind of Asante funeral cloth, and Hovor I (both 2003), with its narrow horizontal basket-weave bands alternating with much wider expanses of Plain, echo the proportions of wide fabric and narrow embroidered bands in the most common kind of adinkra. Through the ‘Zebra crossing’ and ‘Plot a Plan’ series of 2007, Anatsui continued to consciously model many of his smaller works on textile designs. Larger works like Hovor II also have clear references to weaving. 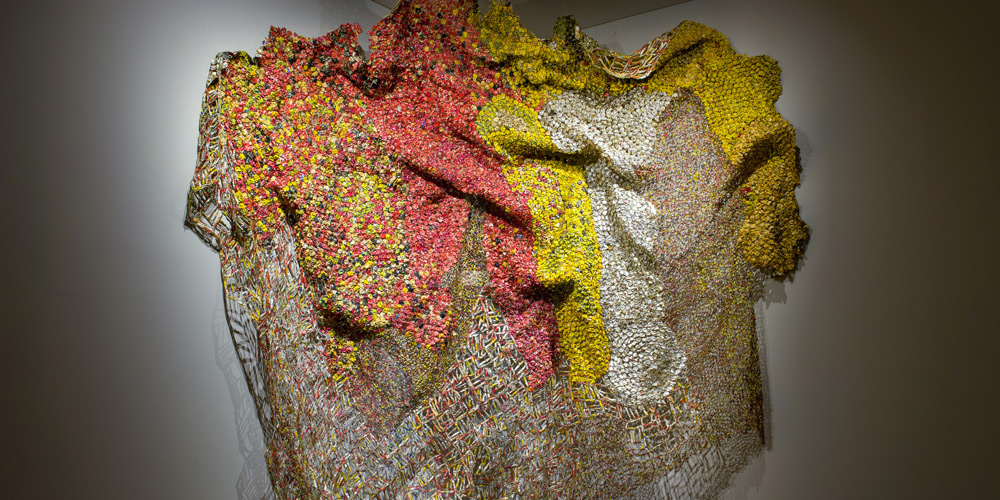 Textiles have long been the handiest rough tool for interpreting contemporary African art, seized on by specialists and non-specialists alike, probably because of ‘the genetic factor’, to use Anatsui’s deadpan phrase for a heritage that is also a cliché. Having established that Anatsui’s father and brothers were weavers, writers could assert that the connection between their craft and his art was self-evident. With further questioning, however, the connection appears slighter but richer. As a youth, Anatsui never even tried weaving–not only because he didn’t grow up with his father’s family, but because cloth simply left him cold. ‘Even in the university, when we were introduced to textiles, that was the area that just didn’t attract me in any way.’ By 2008, when the cloth phase was over, he felt, ‘Textile seems to be coming in because of this format that I use now, which is the sheet format. And therefore the closest thing that people associate them with is textile. But actually [they] should be looked at more as sculpture.’’

While we prepare our summer celebrations for HALI’s 200th edition and 40th year, we would like to extend a warm congratulations to the October Gallery, which is also celebrating its 40th year this annum. Visit El Anatsui at the October Gallery this March, and join us in June for HALI London.