From HALI 196: Dynamics of a Dynasty 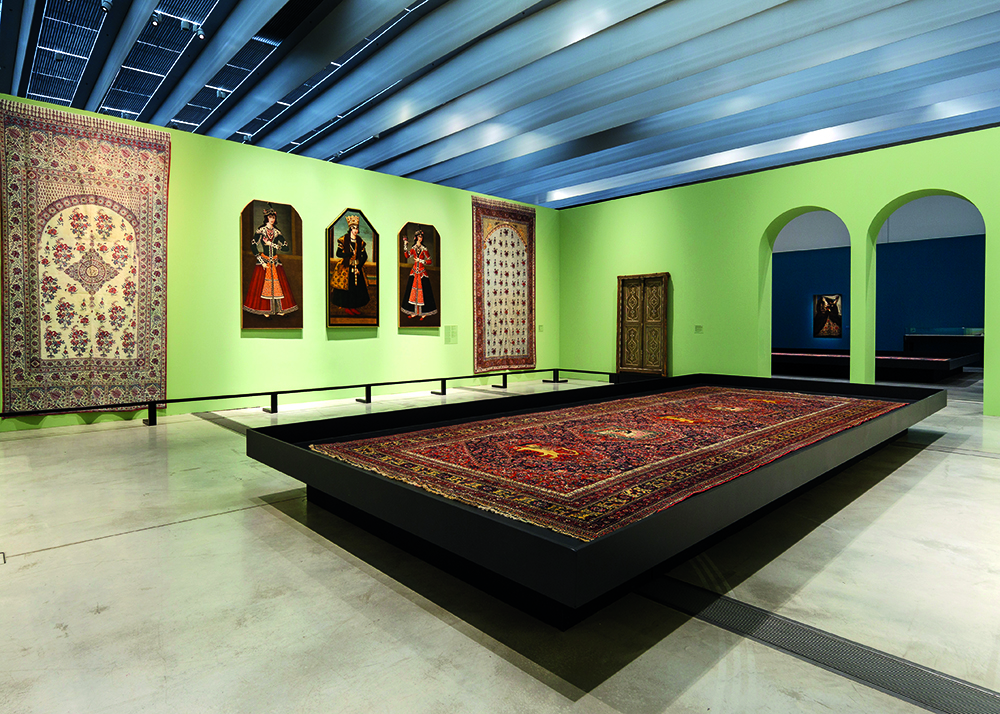 Qajar-period carpets, kalamkari textiles and paintings in ‘L’Empire des Roses’ at the Louvre-Lens.

A fresh approach turned a recent French exhibition on Qajar culture into something more than just an art show. Venetia Porter was at the Louvre-Lens to experience the transformation. Hadi Maktabi comments on the carpets.

As you entered ‘L’Empire des Roses’, in the magnificent offshoot of the Louvre at Lens (28 March–July 23 2018), the tone was immediately set. There in front of you was a wedding dress by Christian Lacroix. Deliberately burqa-like, it had a train that spread widely across the floor, and a narrow opening for the face. As you crossed the threshold, you walked on a landscape in black and white, enclosed by walls of brilliant colour: yellow on one side, dark pink on the other. 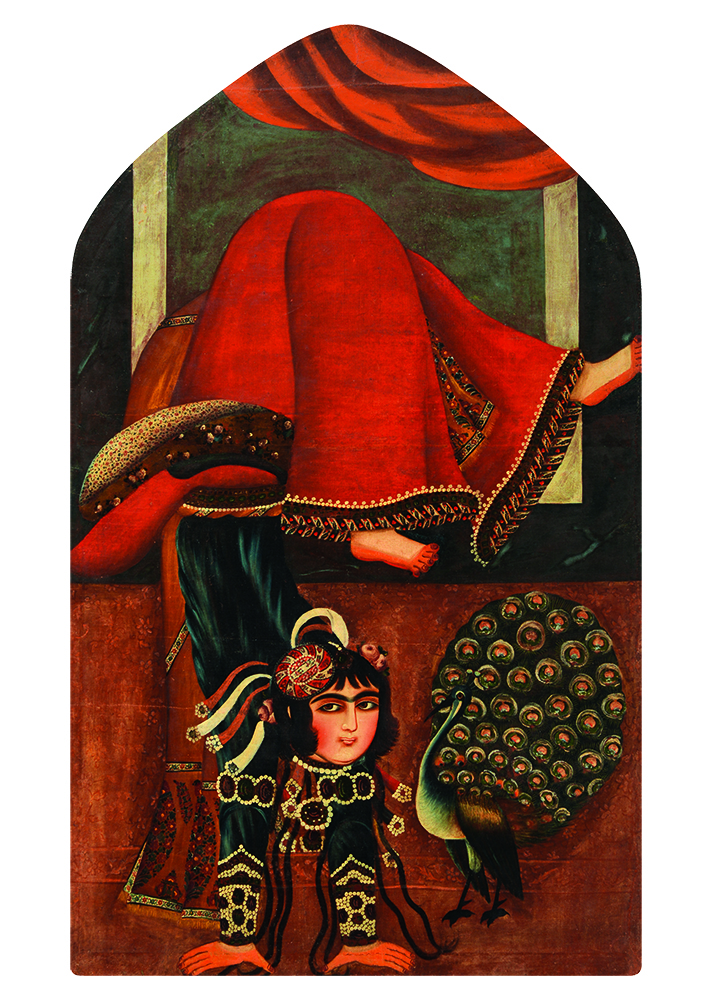 It is what the French call scénographie, more evocative than the mere word ‘design’, and Lacroix was credited with creating it for this exhibition. Because of it, the show was no longer just the story of the Qajar dynasty told through a fine collection of objects, drawn from numerous collections including the Golestan Palace in Tehran; instead, it became something remarkable. For Lacroix had been utterly and gloriously inspired by the larger-than-life paintings, the sumptuous textiles, and the extravagant richness of the jewels. The narrative unfolded through a successive series of multi-coloured rooms, some walls replicating fabric designs. The result was uplifting.

So what is the story? The Qajars ruled Iran between 1786 and 1925. Of Turkic origin, they rose to prominence under the Safavids and eventually wrested control of territories that had fallen to the Zand Dynasty following the demise of the Safavids in 1722. The Qajar domain was vast, encompassing Georgia and the Caucasus, and this period saw wars with Russia, constitutional reforms and the upheavals resulting from World War I. 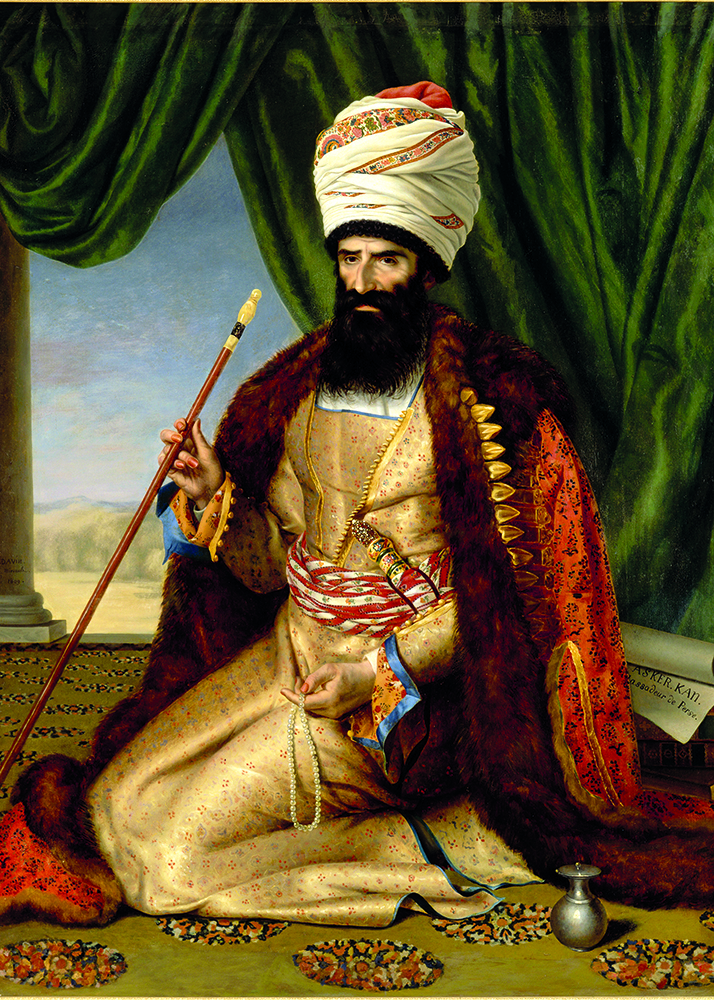 The art that we most associate with the Qajars is seen in the extraordinary large-scale paintings of kings and dancing girls. Some readers might remember the wonderful Qajar exhibition ‘Royal Persian Paintings’, curated by Layla Diba at the Brooklyn Museum and the Brunei Gallery at SOAS in the late 1990s. However, as we learnt from ‘L’Empire des Roses’ and the excellent multi-author catalogue produced in conjunction with the exhibition, there are many facets to this story; the exhibition was not simply about art but took us deep into history.

One aspect that the organisers naturally wished to emphasise was the relationship between France and Iran at this time. Iranian diplomats were painted by France’s finest artists: in 1809 Fath-Ali Shah’s ambassador, Askar Khan sat for Césarine Davin-Mirvault. The details in his painting are entrancing: the delicate hand with hennaed fingernails holding his cane, the other playing with his worry beads, the casually worn fur-lined coat.

The exhibition could be seen as a series of vignettes highlighting, for example, the important role of Sufis. Objects displayed included begging bowls, drawings of dervishes and a felt hat embroidered with the Nadi Aliyan, the invocation to Imam Ali, ‘the manifesto of miracles’. Album drawings provided us with a sense of social norms—a woman seen in voluminous outdoor clothes, a tiny child perched on her shoulder.

Elsewhere, in an extensive section on the dress, we could find the tutu brought to Iran by Nasir al-Din Shah (r. 1831–96). He is said to have been so inspired by seeing the Ballets Russes at the Paris Opera that he introduced it as an item of fashion to his many wives, a fashion that caught on. Here we saw the result in a well-known photograph by the remarkable Antoin Sevruguin (d. 1933).

Other highlights included a small section on photography at the end of the exhibition, an entire room on musical instruments, and a fascinating section on the use of lithography in 19th-century Iran. This last display represented the transition from the copying and illustrating of manuscripts to the major new medium, allowing for the widespread dissemination of printed books—one of a number of important technological innovations taking place at this time.

‘L’Empire des Roses’ proved to be a highly rewarding show with much to admire and learn from. Its door-stopper of a catalogue is essential reading for anyone seeking an understanding of this fascinating period in the complex history of Iran.

Hadi Maktabi writes: When I was entrusted with curating the carpet section of ‘L’Empire Des Roses’, my brief was to procure a number of inscribed and datable carpets linked with some degree of certainty to the royal Qajar dynasty, and that predated the ‘Revival’ of the Persian carpet industry in the 1870s. The subject matter was never of sufficient interest to western collections, private or public, built up in the late 19th and 20th centuries, as it was considered too recent and somewhat degenerate in artistic value compared to the more ‘refined’ weavings of the Safavid age. Lingering perceptions have allowed me to form a collection of royal Qajar carpets that have escaped institutional attention, which went on loan to the Louvre-Lens.

Foremost among the carpets was a majestic Kerman from the workshop of Hossein Kermani, who custom produced about half a dozen carpets for the Golestan Palace after Nasir al-Din Shah refurbished it in 1868. It has a gol farang floral field, very much in vogue and freshly arrived in Iran from the court of Napoleon III, with two roundels depicting variations on the theme of la fête champêtre, and bears an elaborate inscription stating it was commissioned in 1281 by Prince Hakim al-Dowleh for the palace of Nasir al-Din Shah. This is notable on multiple counts: for pre-dating the renovation of the Golestan; as a ceremonial dedication to the Shah; and for demonstrating the innovative vision of Qajar carpet artists.

Two Sehna carpets dominated the installation, both with eye-catching designs and military links. Both are pre-commercial and have woollen warps rather than the typical cotton or silk of almost all Sehna weaving. One, with a boldly colourful rendition of the gol farang, was commissioned by the Shah’s brother Farhad Mirza Mo’tamed al-Dawleh, who was dispatched in 1869 to suppress the autonomous Ardalan rulers of Persian Kurdistan. This extravagant carpet was made two years later in 1289 as a symbolic triumphal piece to proclaim the Qajars’ formal takeover of the province and reflects the importance of carpets in the 19th century as works of political propaganda.

The other Sehna carpet is older and larger, having been woven in 1253 by order of Sarkar (General) Ali Akbar Khan Sharaf al-Molk. The central axis displays five medallions with Qajar Lion and Sun (shiro-khorshid) emblems alternating with cartouches of dancing ladies recalling early 19th-century oil paintings of female entertainers. The court related iconography and the lengthy congratulatory mobarak bad inscriptions across the entire inner border (a scroll more than 11 metres long) suggest this too was a ceremonial object of tribute presented to a member of the Qajar Dynasty.