Italian Velvets on Show in Switzerland 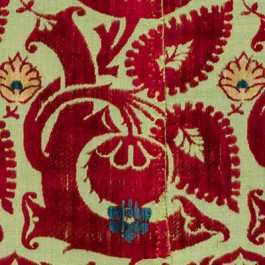 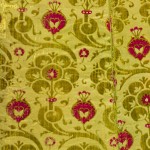 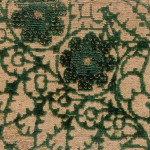 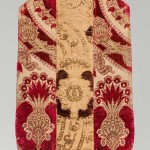 Liturgical vestment made of two gold-brocaded velvets, Italy, ca. 1460–1480. Italian velvets of the 15th century were exclusive and expensive. They were affordable only for the very highest social circles and were made into magnificent secular outfits or liturgical vestments. Abegg-Stiftung, 630 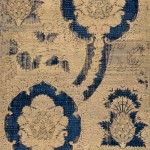 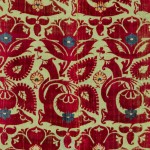 Multicoloured velvet with flowers and fruits, Italy, 1420–1430. Distinctive colour combinations and a powerful contrast between the background and meticulously drawn motifs add to the charm of this velvet, where even the tiniest flowers, elegantly curved stalks and serrated leaves are clearly visible. Abegg-Stiftung, 179 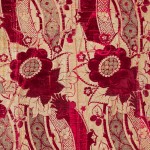 Gold-brocaded velvet (detail), Italy, ca. 1430–1440. Large blooms, leaves, tiny flowers, raspberries and patterned vines make up a pattern repeat that is an incredible 2.20 m high. The sophisticated, differing pile heights relate to the height of the metal bars that the threads were raised over. Gold thread has been used as a supplementary warp and the metal is visible on the voided areas. Abegg-Stiftung, 1976 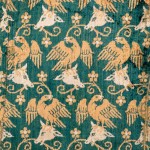 Velvet showing eagles and cows’ heads; one of the earliest known examples of a velvet with a figurative design. Italy, last quarter 14th century, silk. Abegg-Stiftung, 171

One of the world’s foremost collections of textiles, the Abegg-Stiftung in Riggisberg, Switzerland, places Italian silk-weaving under its forensic gaze in its seasonal special exhibition ‘Triumph of Ornament’, open until 8 November.

In particular, it looks at the high point of this art, the fifteenth century, when cities like Lucca, Venice and Florence were the heart of luxury textile production and trade. Their velvets were the envy of the world and furnished the homes, and dressed the bodies, of the European elite. Although in direct competition with the silk-weaving centres of the Near East, Persia and China, whose technical achievements they soon surpassed, they added an artistic style and virtuosity that has not been seen since.