An Architect’s Eye: The Chris Alexander Collection at Sotheby’s, London

Sotheby’s in New Bond Street will soon be the venue for the upcoming dispersal of two collections of memorable antique carpets, assembled for pleasure by British giants in the world of art and architecture. Daniel Shaffer looks forward to a London autumn auction season that may test the mettle of the international carpet collecting community.

First up is the huge single-owner sale of the estate of the British painter Sir Howard Hodgkin (‘Portrait of the Artist’, Tuesday 24 October 2017), which among many other treasures includes numerous fragmentary and damaged classical oriental carpets and textiles, as well as European tapestries, almost all of them properly mounted, which were hung as artworks in his home and studio. The Hodgkin sale is previewed elsewhere on hali.com. Then, in the same New Bond Street rooms a fortnight later on Tuesday 7 November, Sotheby’s annual carpet sale —the sole dedicated carpet auction still remaining on the London calendar—includes the first part of a consignment of antique oriental rugs, among them some superb early Turkish village weavings, from the much-heralded collection of the highly regarded British-born architect and erstwhile Berkeley-based Professor Christopher Alexander. The second tranche, with more rugs that will be worth the wait, is scheduled for the same slot next year.

Central to Howard Hodgkin’s appreciation of rugs and textiles, the interplay between colour and form (or ‘colour and geometry’) will again be to the fore with Professor Alexander’s rugs, which were mostly acquired from international dealers during the vibrant 1970s and 1980s. They first came to wide public attention when they were exhibited, in somewhat controversial manner, at the old de Young Museum in San Francisco during the 5th ICOC inNovember 1990. Alexander chose to illuminate only the ‘centers’ of their designs, in accord with a theory introduced in HALI 56 (1991) and elaborated in his idiosyncratic 1993 book, A Foreshadowing of 21st Century Art: The Color and Geometry of Very Early Turkish Carpets. Like Hodgkin, Alexander understood that there is great beauty and graphic power to be found in often severely damaged fragments. Like Hodgkin’s, many of Alexander’s pieces are mounted for display as artworks. But where the two collections differ is in Alexander’s narrower focus on early Turkish village weaving. For although his book did not appear until the same year as the late Heinrich Kirchheim’s Orient Stars, Alexander was the first major collector since the Americans James F. Ballard and Joseph V. McMullan to go public with a large number of pieces of this type, some of which can be considered ‘iconic’. 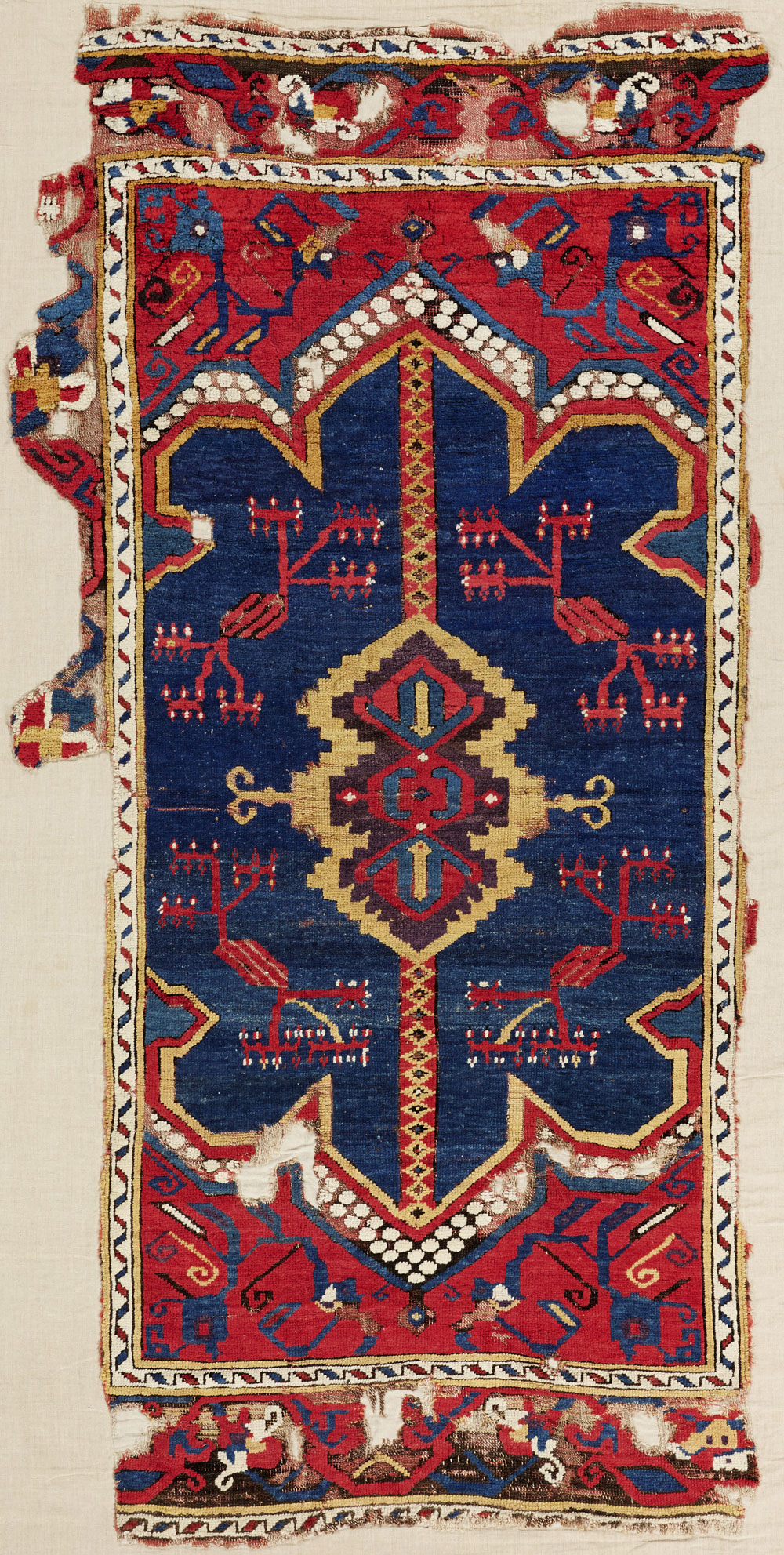 Foremost of these is the leitmotif for the Alexander sale (above), a wonderful old blue-ground central Anatolian village medallion rug, probably from the Karapinar area. Nicknamed ‘the Pink Panther’, for obvious reasons, it was discovered in Istanbul by Alan Marcuson and Garry Muse in the late 1970s (HALI 38, pp.14-15). I recall its arrival in London at Marcuson & Muse’s Little Venice gallery. It was clear then, and even more so today, that despite the loss of most of its side borders, this is one of the great early Anatolian village rugs, arguably the greatest to appear at public auction in living memory, and without known counterpart other than a red-ground rug with a different border in the Ballard Collection at the Saint Louis Art Museum (see Walter Denny, The Carpet and the Connoisseur, 2016, pl.34), and two fragments in the TIEM, Istanbul. The Pink Panther is very conservatively estimated at £40-60,000. Another favourite is a small west Anatolian (Bergama area) fragment, with the remnants of a field of elegantly drawn Turkic göl-like medallions in offset diagonal rows against the richest, most saturated dark aubergine field (below). This little gem is estimated at just £1,400-1,800, but should sell for many times that amount. 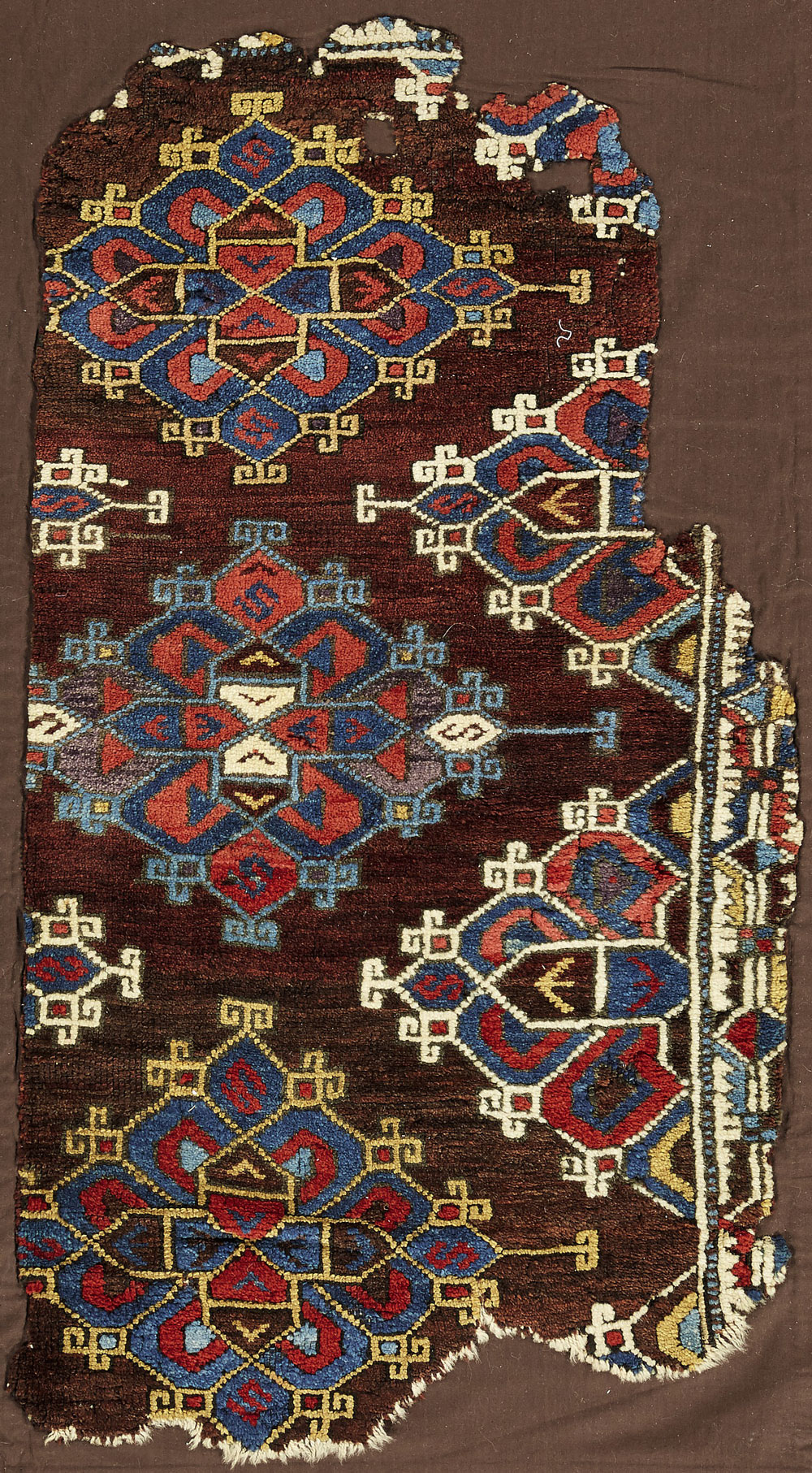 One could mention almost every Alexander rug on offer, but also worth particular comment is a red-ground two-medallion Anatolian fragment with a swirling ‘S’ border on white at £6,000-8,000 (lot 7). 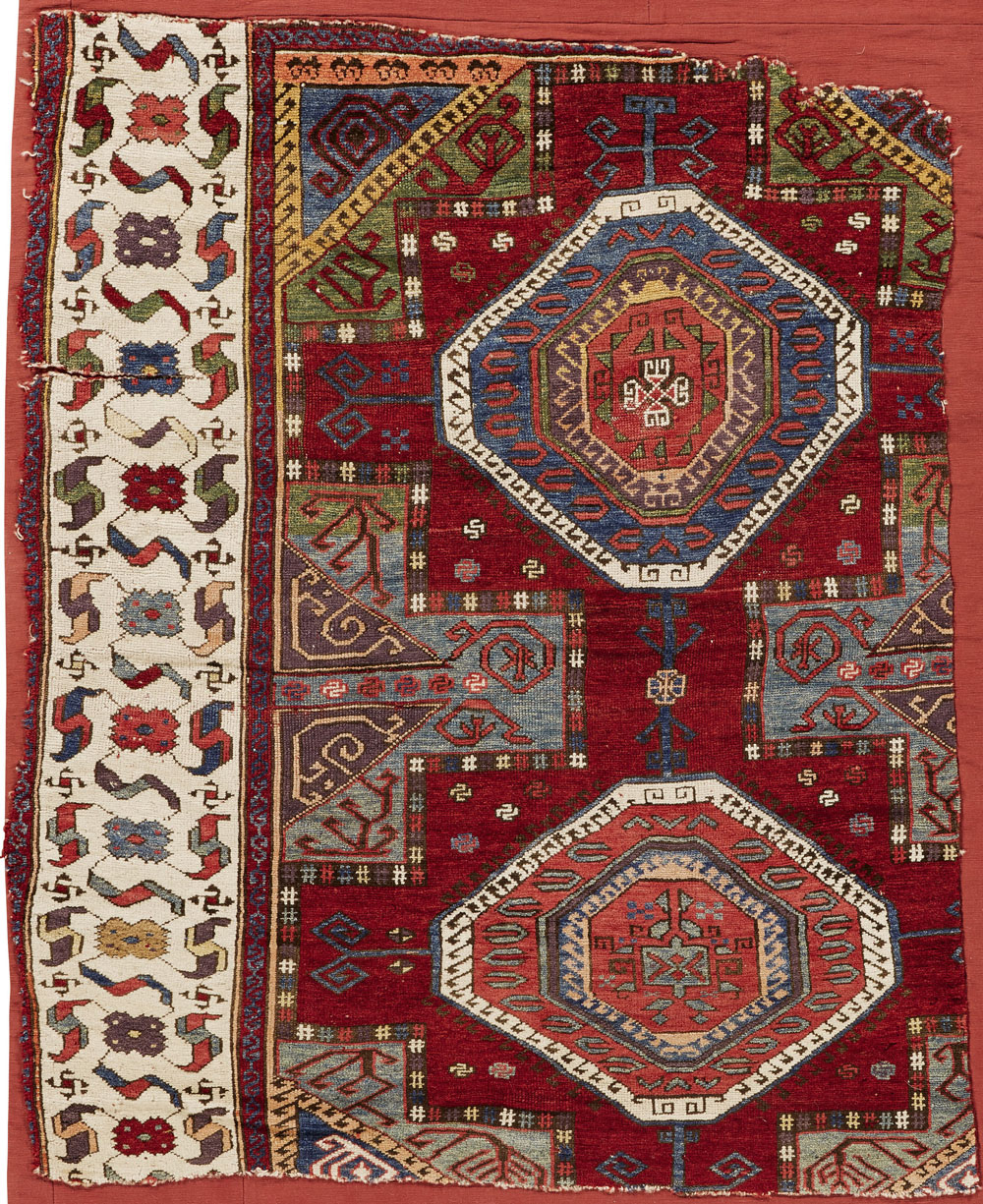 There are two brazen fragments of an archaic looking east Anatolian Şarkişla rug (lot 26), which are difficult to appreciate due to unsympathetic mounting (£5,500-7,500), and a very unusual long fragment of a white-ground Anatolian (?) runner (detail below) with an ancient design of highly abstracted scrolling blue S-dragon forms within a formal reciprocal trefoil border in two tones of red, at £28-40,000 (lot 78). Another Karapinar piece, with three Turkmen-like ‘Seljuk’ güls on the vertical axis, is estimated at only £2,800-4,000 (lot 85). 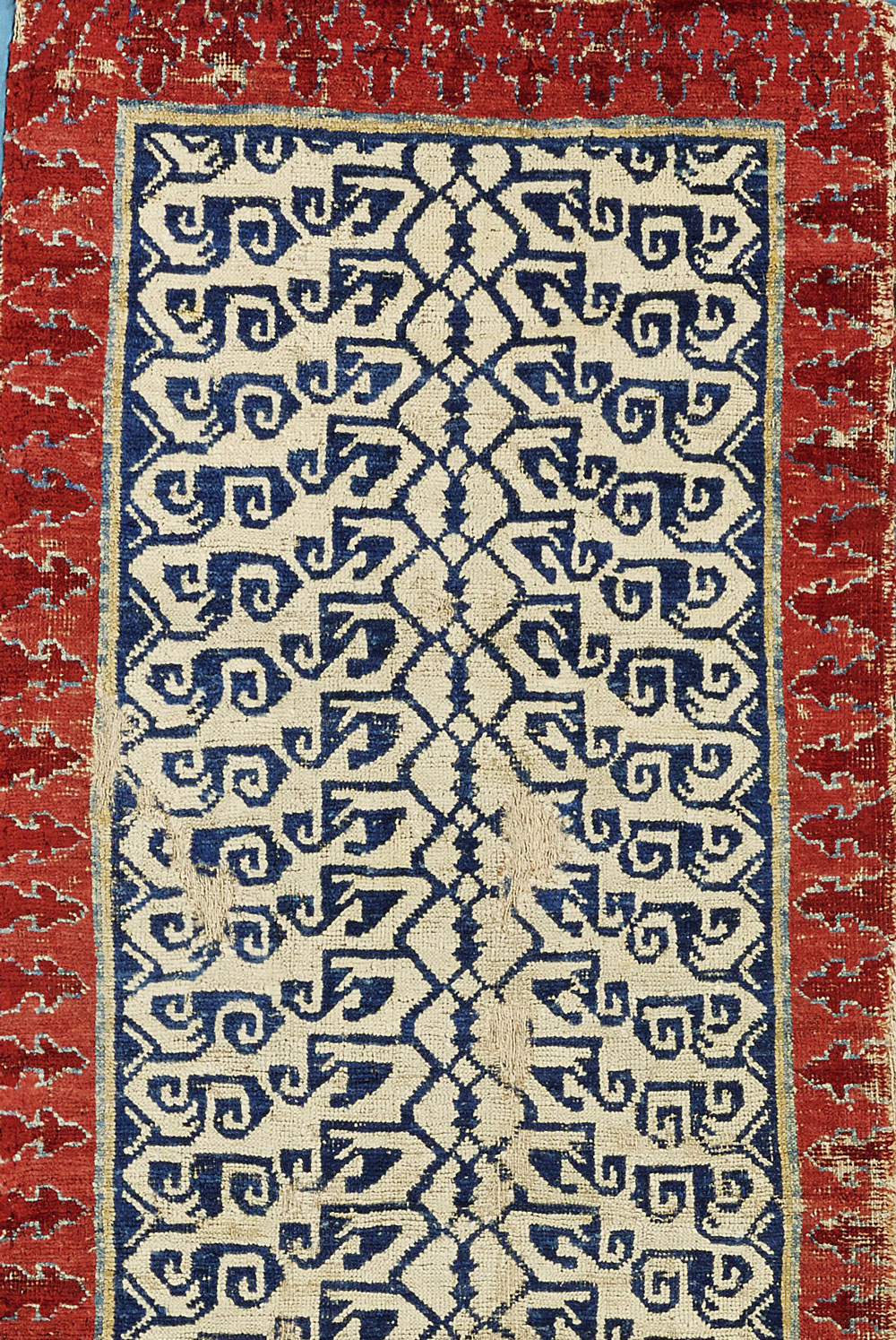 Although many of the Turkish rugs in the sale are central Anatolian Konya region village pieces, there are also classical ‘derivatives’ such as a two-medallion ‘large-pattern Holbein’ variant (£8,000-12,000) (lot 88). 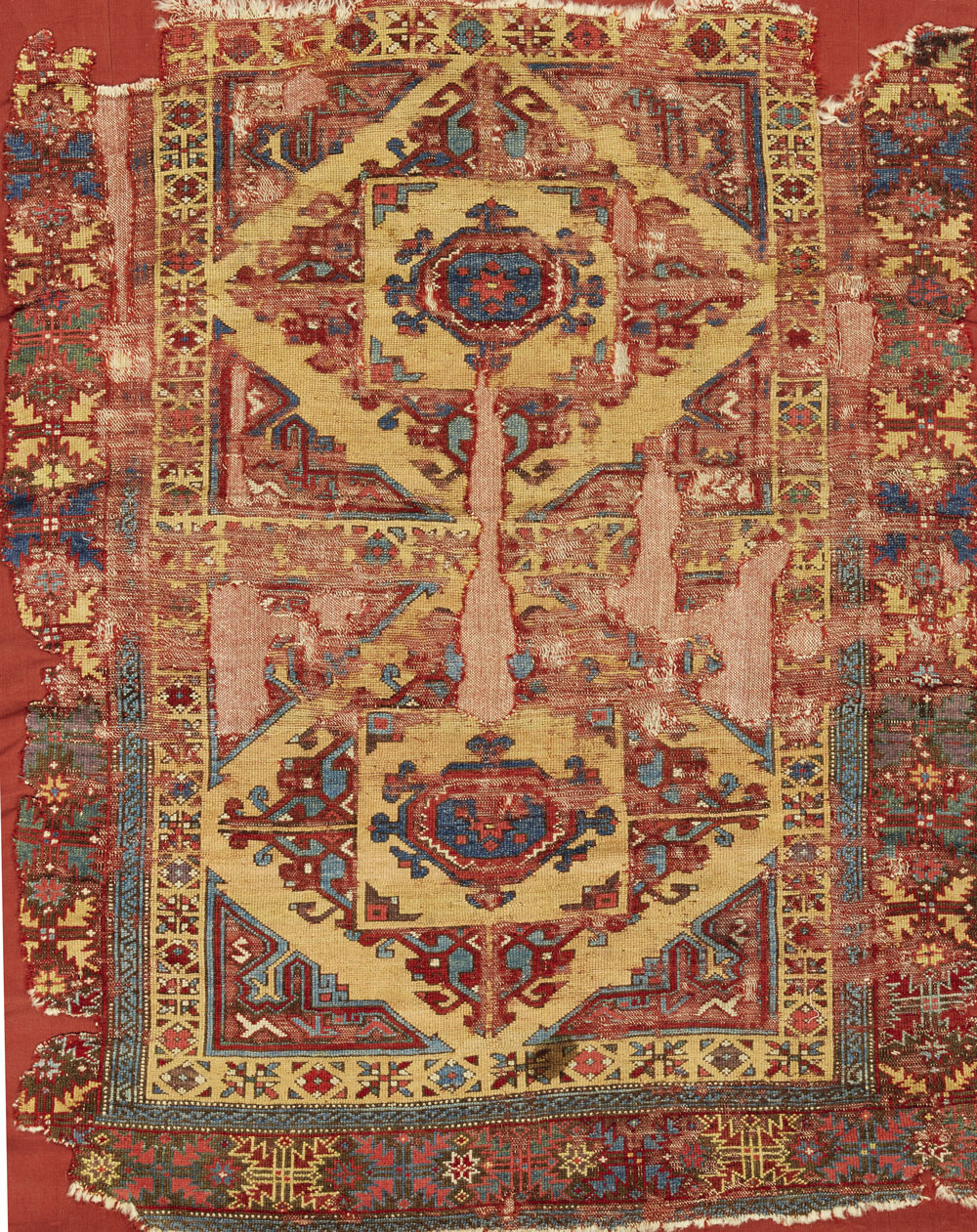 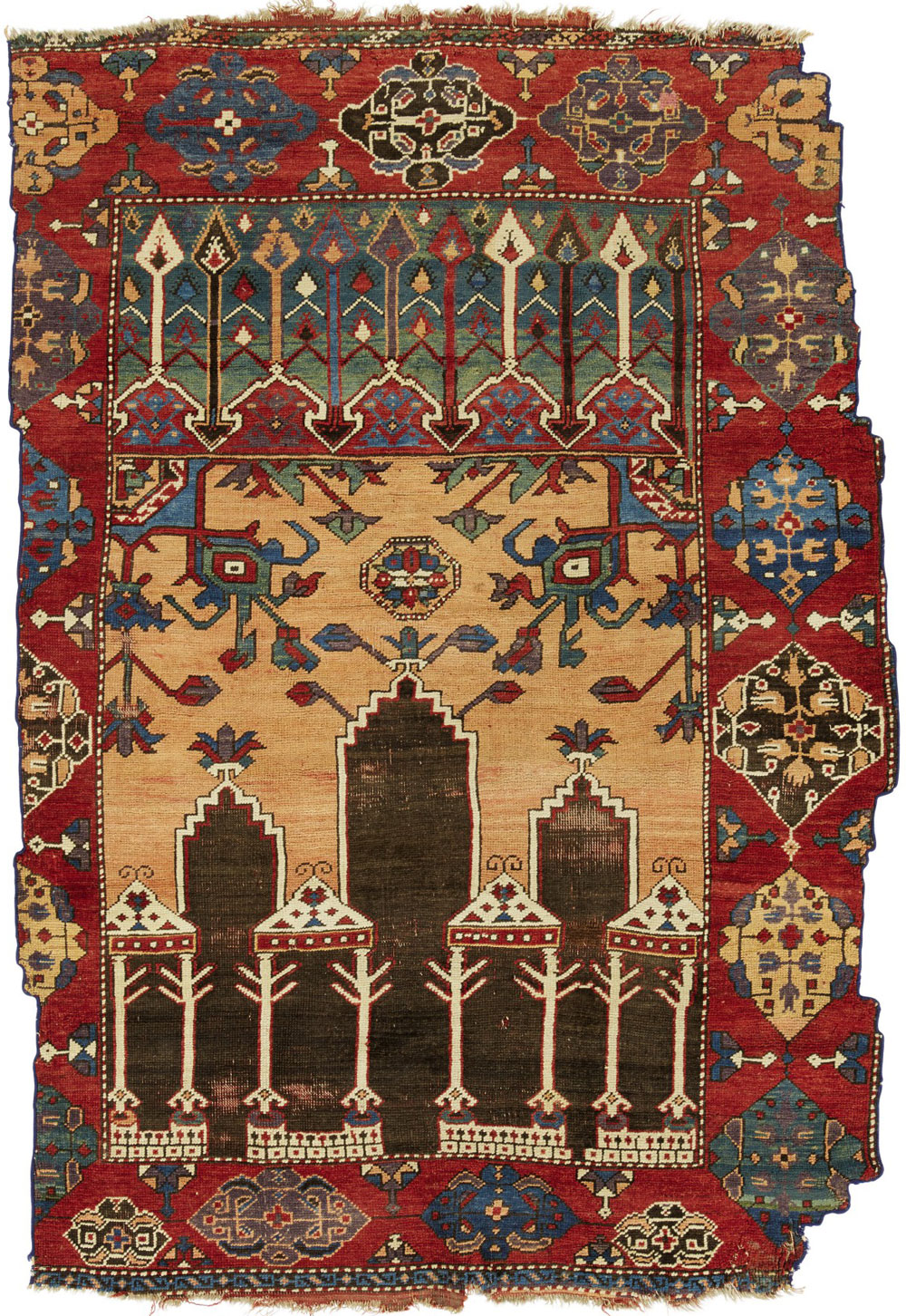 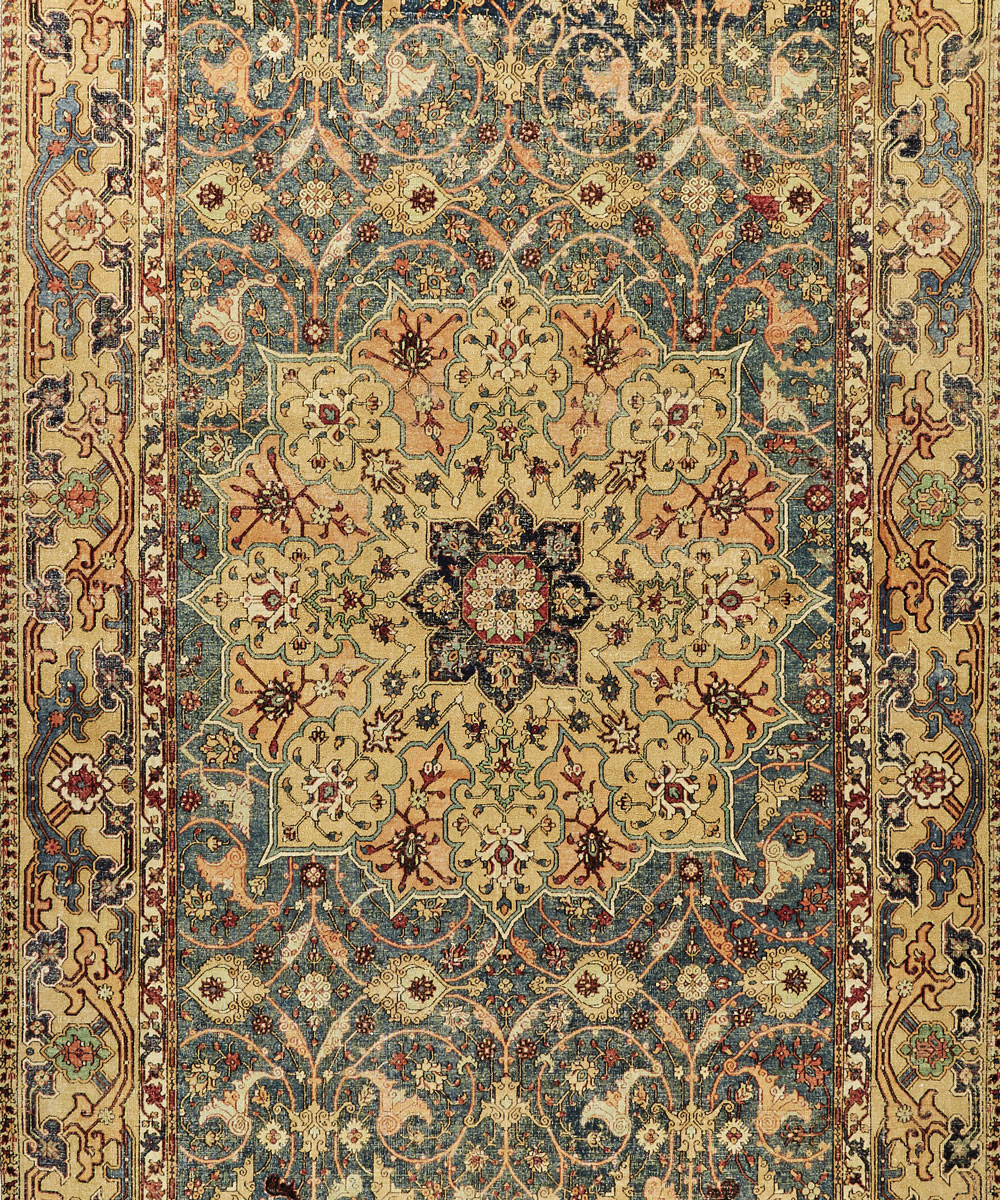 Generally, the estimates for these well-known rugs (all but one, an unremarkable Gördes prayer rug, are in his book) are realistic, even inviting. Lessons have been learned from a previous consignment of selected pieces, at Christie’s in London in October 1998, which included the von Hirsch Garden carpet fragment and an Ushak saf fragment, both of which were, serendipitously, acquired by Howard Hodgkin. On that occasion, while some pieces sold well, others failed against generally too high estimates. A few rugs in the latest consignment are therefore repeat offerings with reduced expectations, such as an Anatolian carpet with a narrow abrashed blue-green field carrying three small medallions and broad angular ‘star and cartouche’ borders (£15-20,000).

This is an interesting and perhaps challenging sale in a fickle market. Even without their provenance, the rugs should have great appeal to specialist connoisseurs worldwide, including Turkey itself, as well as perhaps to some of the international dealers who sold pieces to Alexander in the first place and have since moved on to other areas of the art business, but still love the carpets. So it would be very surprising if most of the rugs did not exceed expectations.